Which LEGO® sets have the most new parts? September 2020 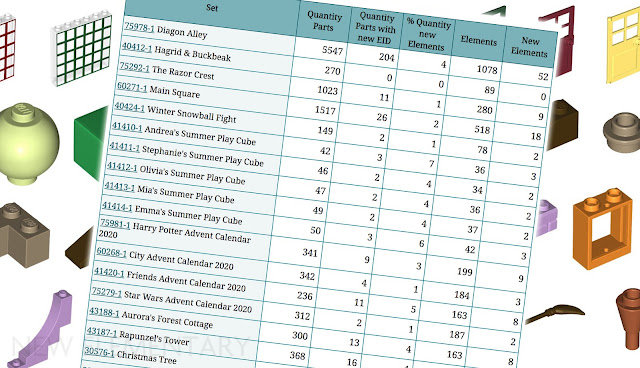 Here is the second installation of our latest resource for you: a list of the newest LEGO® sets and the quantity of new parts in them. Developed in partnership with TobyMac from Rebrickable, we  show this both in terms of quantity as well as overall percentage. So if you like to buy sets knowing they'll contain parts you don't have, use our table as one of your purchasing factors. Note: we define 'new elements' as being either: We do not include elements that have been given a new Element ID by TLG despite having appeared in sets in the past, because they're irrelevant to builders.

Harry Potter sets account for the majority of this list. Note that sets released late in September will be included in next month's reports.

READ MORE: What complaints about parts do LEGO Consumer Services receive, and how do they deal with them?

All images of elements are ©2021 The LEGO Group.
Posted by: Admin Posted on 9/25/2020 01:54:00 pm
Email ThisBlogThis!Share to TwitterShare to FacebookShare to Pinterest
Labels: Buying LEGO parts, New parts lists