We've discussed LEGO® Hidden Side sets quite a bit this year and now it is time for a different take. We sent the talented US builder Eli Willsea (ForlornEmpire on Flickr and Instagram) a copy of 70430 Newbury Subway and 70432 Haunted Fairground to see what original creations he could come up with, also using his own LEGO parts. The products in this article were provided for free by LEGO; the author's opinions are not biased by this.

First off let's take a look at some of the newest elements included in these sets that I used in my creations. There were several recolours of existing parts as well as a few new elements that immediately caught my eye. 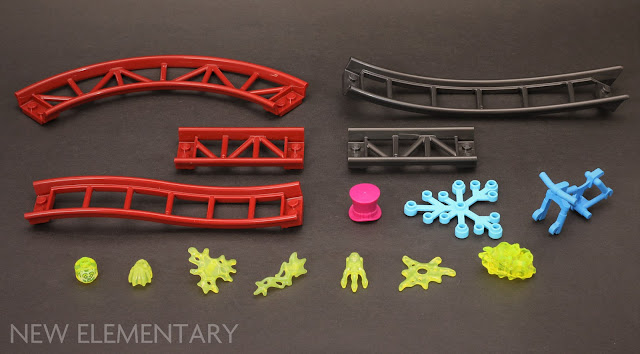 A brave crew is exploring a cold new world. But what is that they see? A strange new tree? Time to send the rowboat to investigate! 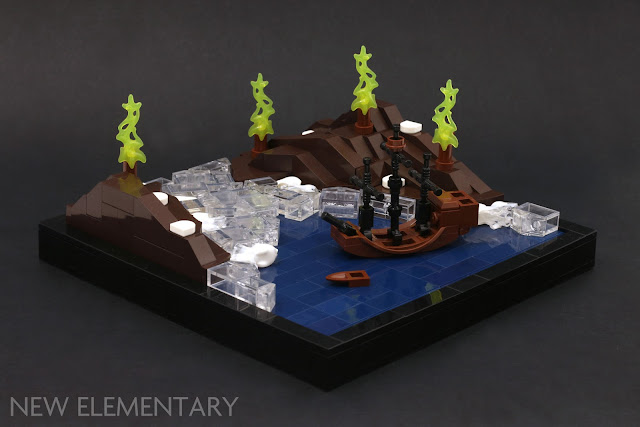 In this build I wanted to feature some of the new “ghostly” elements that come in Mini Accessory, No. 13 in Trans-Neon Green (6313372 | 65726) which I call the ghost effects pack. As soon as I saw these lightning-shaped parts I knew I wanted to either use them as microscale trees or shooting stars; I opted for trees. Their bar connection on the back makes it easy to connect them in different ways; I used it to attach the trunk of the tree. I also used a few of the Spencers (Dog, No. 17 – 6271329 | 56202) as part of the ice floating close to shore. The dogs work well because they have been dual-moulded with Transparent/ Trans-Clear and White, giving the effect of ice and snow.

Here is a closer look at some of the new ghost effect elements: 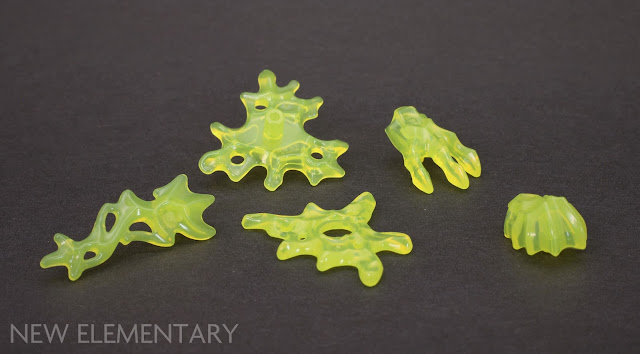 During science class in school, do you remember pulling out a case of slides with tiny little specimens to examine under the microscope? I sure do. I also remember being far more fascinated by looking at my own hair, or spit, or anything I could find lying around that I could zoom way in on. 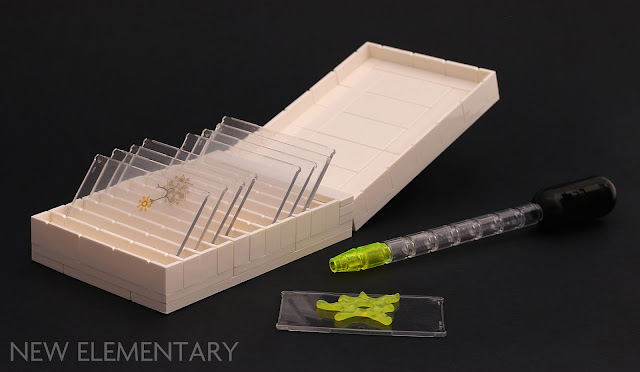 The ghost effects pack comes with this splat effect. This lends itself very well to being used as spilled liquid or slime. The circle in the middle of the element is intended to fit around a minifigure’s neck, which could be useful in other applications, but here it adds to the organic effect of something a scientist needs to examine. If this part came in other transparent colours in the future, especially Trans-Clear, I could see many builders finding uses for them in MOCs. 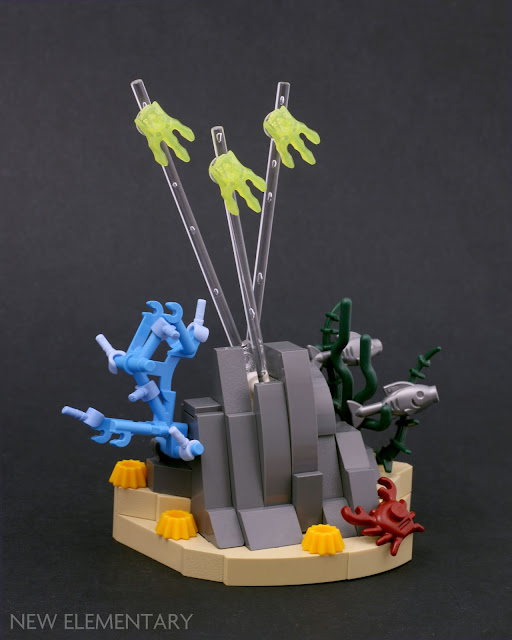 I took one look at the new bike element now in Dark Azure (Bicycle Frame, No. 1 – 6295974 | 36934) and decided it was not a bike, but coral! I also utilised another element from the ghost effect pack: claws. I couldn’t help but see them as jellyfish.

READ MORE: See our readers' MOCs using the Bicycle Frame, from our 2019 contest 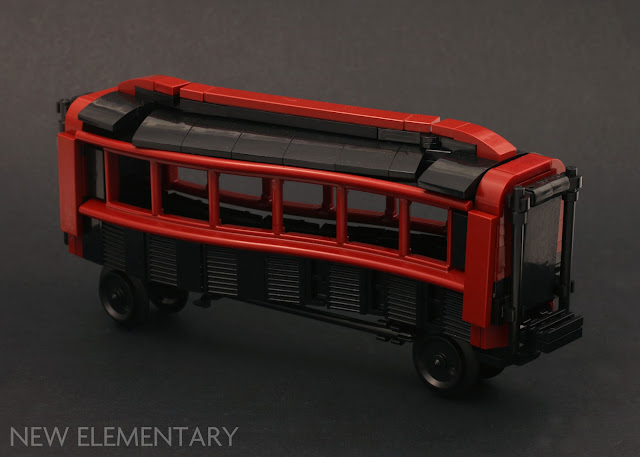 The challenge was that the bow of the tracks made them a bit tricky to integrate into a sideways-built structure so I used several hinge bricks underneath the windows and hinge plates on the roof to compensate for the warp. In the end, while the look is fun, it is probably not a very practical way to build train windows...I can't see this train actually rolling on tracks!... but I think it would fit right into the world of Hidden Side.

Interestingly enough, while working with some of the new elements and recolours, I found myself leaning toward the darker tones of the Hidden Side theme. I find it is a fun and mysterious colour palette that is refreshing to work with.

When I was growing up our family had a bed in the shape of a blue plastic car that my younger brothers got to use. It was super cool because you could pretend to drive it during nap time! 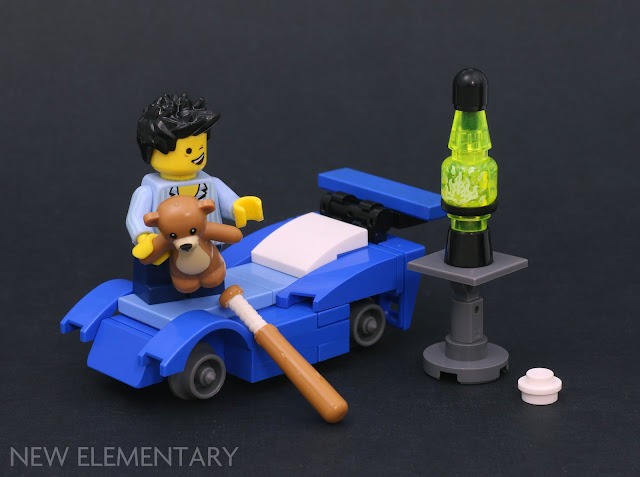 A tea party is always a happy occasion. It doesn't matter if you are at a fancy tea-house or in the backyard with a plastic picnic table and chairs;, tea is something to look forward to. 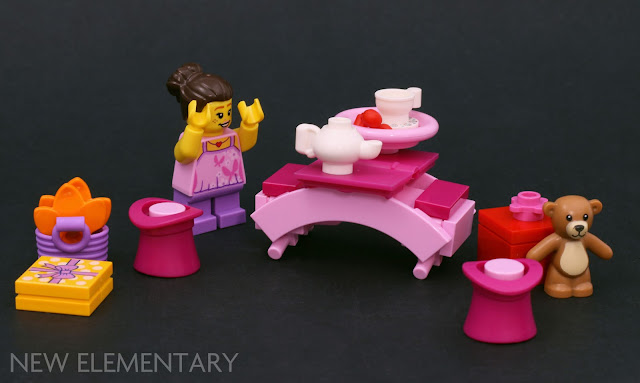 The curves of the top hat (Mini Hat, No. 30 in Magenta – 6294375 | 27149) reminded me of the child-safe curves of play structures made for kids, so I used two as plastic kiddie chairs to complete this little scene.

All text and images are © New Elementary unless otherwise attributed.
Posted by: Admin Posted on 9/08/2020 04:15:00 am
Email ThisBlogThis!Share to TwitterShare to FacebookShare to Pinterest
Labels: Hidden Side, MOC