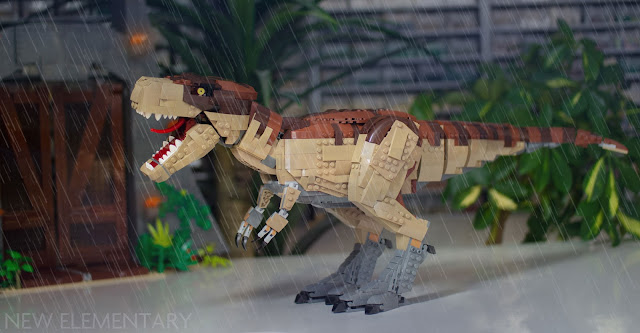 The first instruction booklet guides you through the build of the biggest dinosaur ever in a LEGO set. In his interview with us, Mark said that this was the starting point of the set, and you can really tell. The beast is almost 70cm long and hard to give justice to in the pictures; when you see it in person it’s really impressive.

The build is interesting and follows a repeating schema. First you build the centre of a body part with different hinge elements integrated, and afterwards cover it with slopes and wedges from the sides to give it its organic shape. 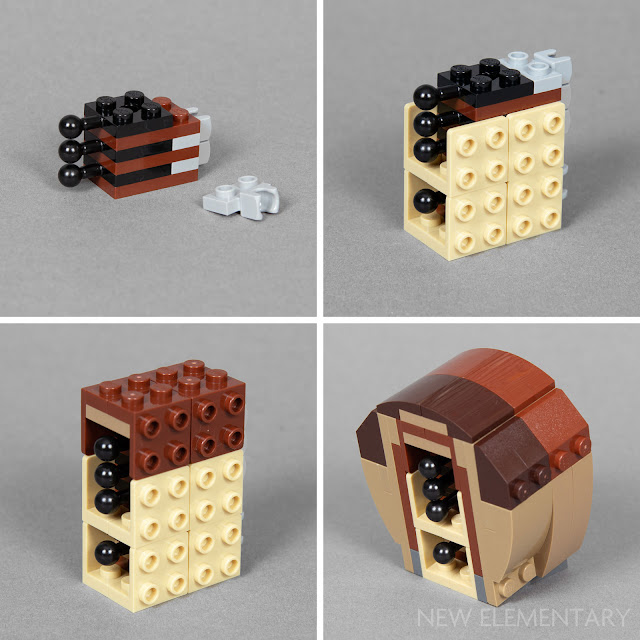 Plenty of small ball joints get used in the tail, to allow for the movement. This technique leaves gaps, but most are not too wide and don’t bother me in the end result.

Maybe changing the colour of the Mixel hinges to a darker or brown tone would have made it even better, however these special elements are 'colour locked' by The LEGO Group because of the unique technical complications of their ball and cup connections.

What I’m impressed most by is how thin and fragile the legs look while being extremely sturdy. The plates that connect to the SNOT converters not only make it more organic but also interlock the different sections and hold the leg together. 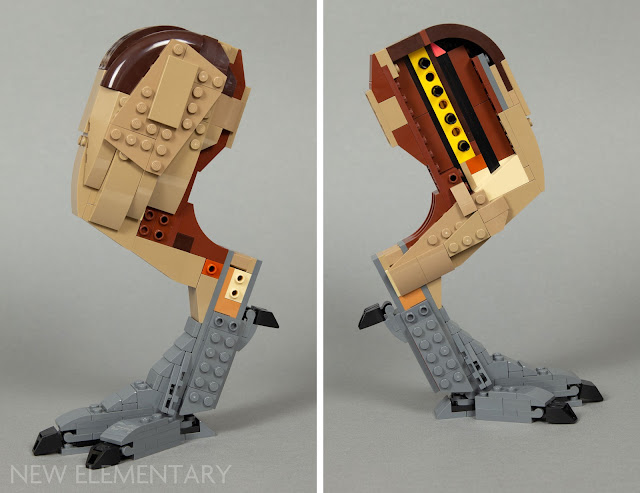 A very satisfying connection is used at the feet where the upper part of the feet are angled and perfectly align with the 2x3 slope.

With the head you have the same pleasing effect, as you begin with the technical innards and then add more and more slopes to shape it. 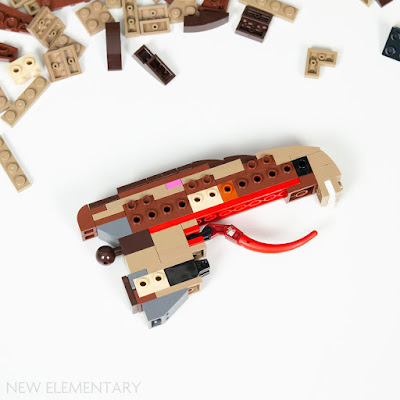 The hinge of the jaw works well but I feel that when close-mouthed, the head is a bit square and looks better when opened.

In general the head definitely says T. rex but after watching the footage again, not particularly the one from the first movie. But I don’t know if it is possible to do it better, so this is perhaps nit-picking.

Quite a lot of different hinges are used to make the dino surprisingly agile. Leaning its body forwards and backwards, bending the neck and waggling the tail gives it a lot of body language. Combined with the jaw, you can represent many iconic T. rex expressions.

Unfortunately the leg joints are built rigid to hold the immense weight so you can’t pose it in a running position. You can move the tail to the sides, but not up and down.

A bit of a downside is actually the underside. I didn’t expect too much of it, but in particular the jaw and one segment of the tail you have big holes that ruin the otherwise great organic look. 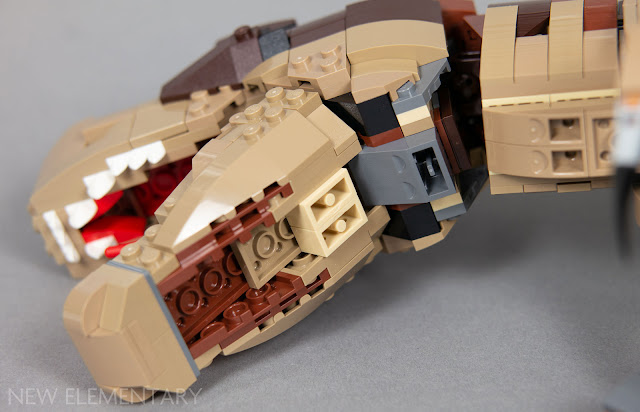 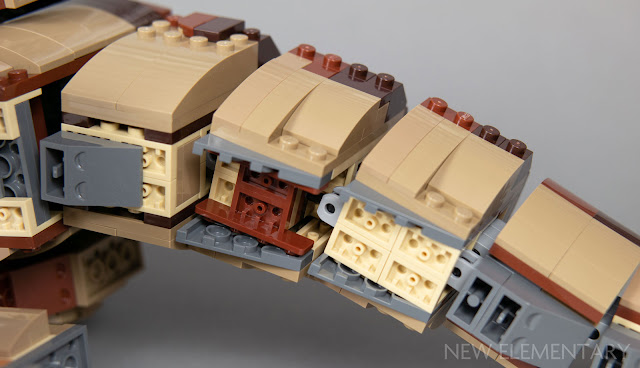 When bending the neck you also reveal a gap, which is probably hard to cover. Mark showed some humour and hid a frog here, which symbols the amphibian DNA that got used to recreate the dinosaurs in the story. 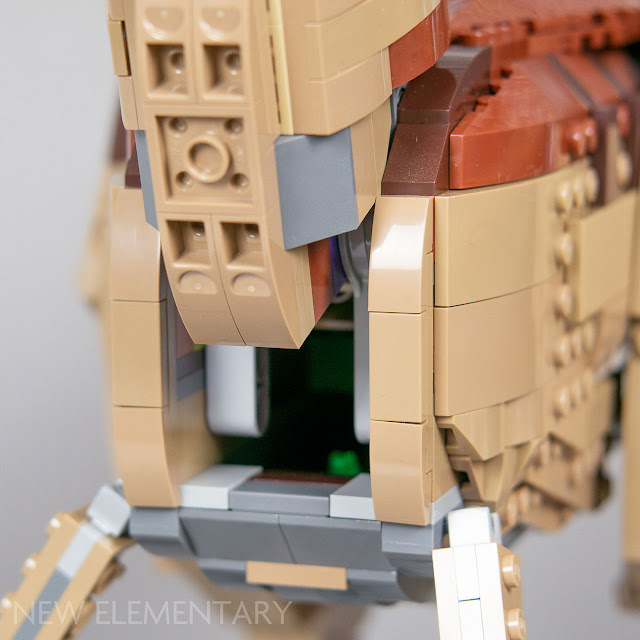 The second part is the iconic Jurassic Park gate, which is in this set because it’s so popular – in the movies there is no scene including both the T. rex and the gate. It’s a very straightforward build and doesn’t reveal any surprising building techniques.

In the movie there is nothing in the backside of the gate but for the set they decided to place different scenes from the movie here that occur all over the park. This gives the build a bit more diversity, as the panels of the gate alone would be pretty boring. 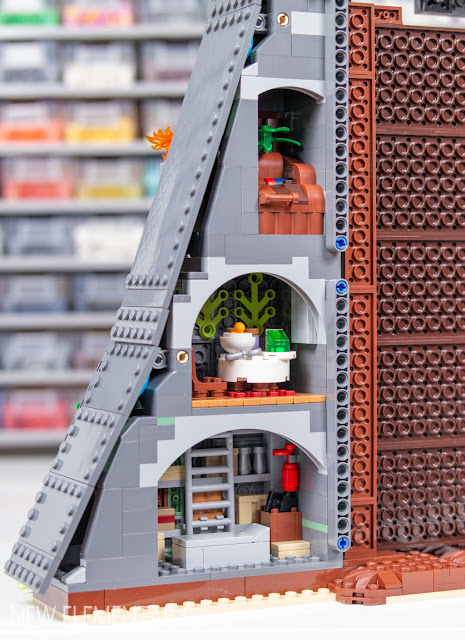 Some of the rooms include some interesting ideas such as the use of leaves as decorations for Hammond’s dining room (second floor on the left) or the detailed recreation of the maintenance shed (bottom right). But because of huge gaps in the construction on the top, the different coloured arches and the Technic beams, the whole idea doesn’t really sell well to me. 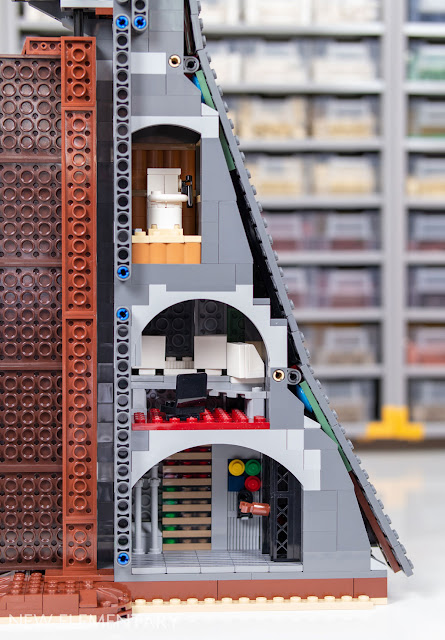 For me as a builder, pieces such as the hatched eggs (Element ID 6259700) are a perfect inspiration to start my own Jurassic Park builds. I guess collectors won’t be impressed by the back as the surrounding structure distracts from the scenes. 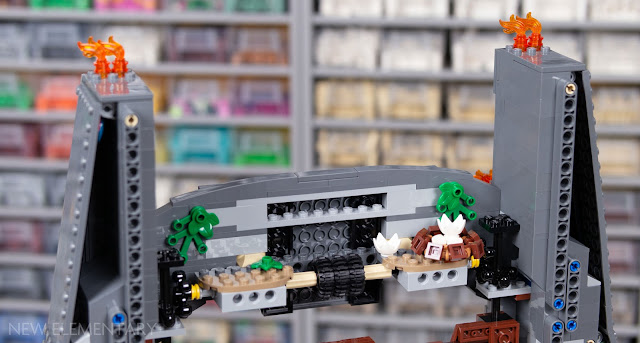 The most challenging part is probably to get the plants exactly as in the instruction; the greenery is surprisingly dense for a LEGO set and has a lot of variation. Unfortunately it’s only on the front side. 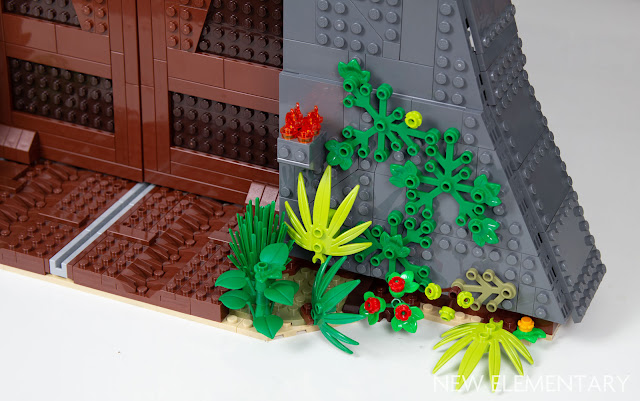 This set comes with just a few stickers and none of them are for the T. rex.

As you saw in my pictures, I didn’t apply the stickers and that leaves out one of the most iconic parts of this set, the Jurassic Park sign above the gate. I can live with not having the specific displays for the command centre printed but would have loved if the sign was printed, especially because the “Jurassic” sticker has a special shape and looks like it would require some sticker skills to put it on flawlessly. I suspect that The LEGO Group simply can’t print on the Plate 6X16 W. 26 Knobs (Design ID 6205) because they never have before, but if it is indeed possible this would have been a good reason to start.

One of the reactions to the reveal of this this set was: “Where is the Ford Explorer?” A natural question, as the iconic Explorer is the missing link, first passing the gate and later getting inspected by the T. rex. One probable reason it’s been left out is because of the scale. The first thing designed for this set was the T. rex which was meant to be the biggest LEGO dinosaur possible, so it was built without having a particular scale in mind. This final version turned out way bigger than minifigure scale, so a potential Explorer would have been in a bigger scale too which wouldn't make sense if you want to include minifigures in the same set.

So they went with the gate and even though this could actually be in scale for figures, the size of the Explorer compatible to the T. rex got indicated by the distance of tracks in the mud.

I built my own Ford Explorer and let it pose with the set to show the difference in scale. 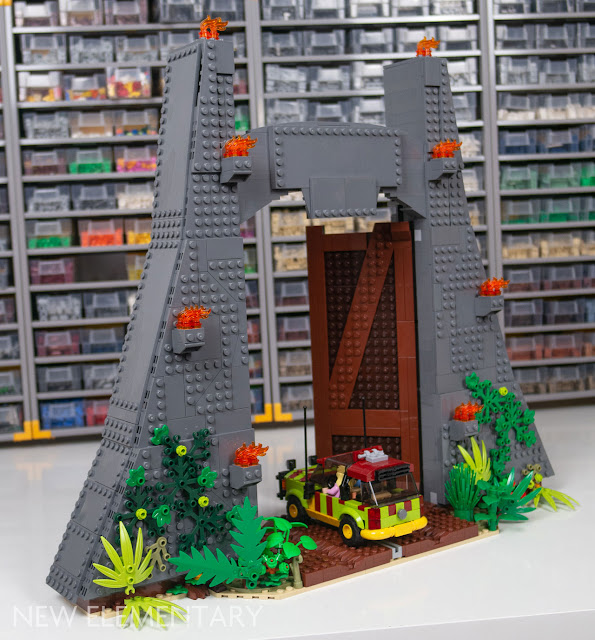 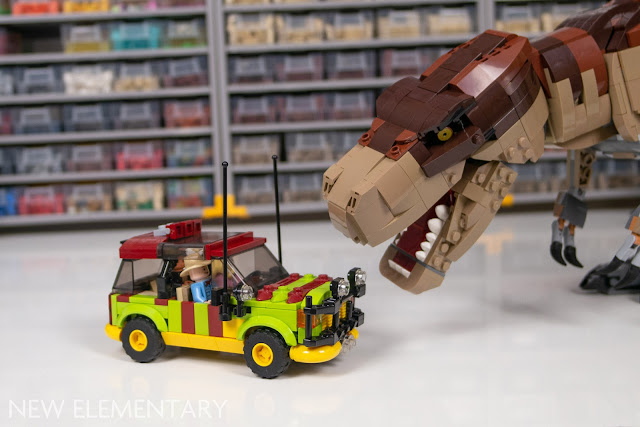 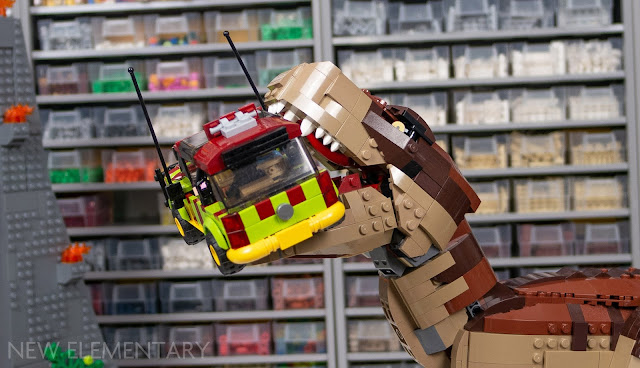 The LEGO Group’s intention to give us the hugest brick-built dinosaur in a set is successful. You get a massive organic build, which comes with good colours, useful parts and a lot of movability. I don’t remember seeing a fan build in that scale with the same level of detail and stability.

The size of the gate is impressive as well and the little scenes make the build more interesting, but for me it will just be a source of pieces to build my own Jurassic Park models.

Products mentioned in this post were kindly supplied by the LEGO Group. All content represents the opinions of New Elementary authors and not the LEGO Group. All text and images are © New Elementary unless otherwise attributed.
Posted by: Admin Posted on 6/22/2019 02:56:00 pm
Email ThisBlogThis!Share to TwitterShare to FacebookShare to Pinterest
Labels: Jurassic World, Set review, Technique