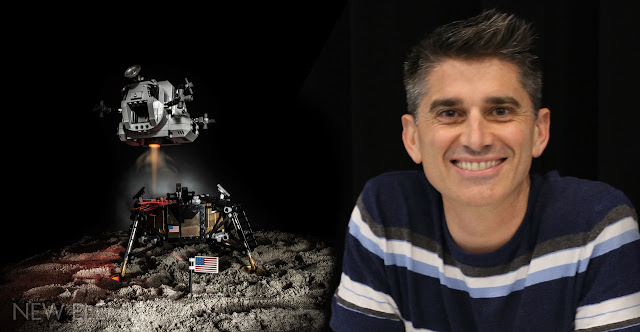 This looks incredible, Jamie. Who designed the set?

Jamie: Lars Joe was the designer, he normally works on Architecture but he also did the Winter Village firehouse, that was his first Creator Expert model and now this is his second one. You might also see some influence of Mike Psiaki, he did some of the original configuration for this and the triangulation on the legs. Then, when Lars Joe was working with it further, I pitched in a little bit on the upper part in the locking mechanism. We all couldn't help ourselves but to want to play with certain parts! But it's definitely Lars Joe.

It must have been quite a challenging brief for him.

Jamie: We’ve really trying to one-up ourselves because of course we've done it before: there was the blue one in the 1970s, there was the Discovery Channel collection and so this one we really tried to bring up a notch. One of the things we thought is, because you're celebrating a landing on the moon: you have to show those footsteps. So we have the footsteps from the minifigure as he is about to plant the flag, we have the lunar surface of course with a crater - maybe a little bit bigger crater than where they would have landed. 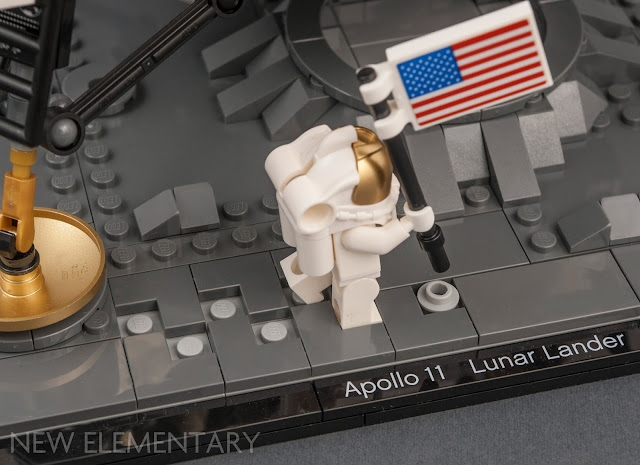 But you wanted to reference the 1970s crater baseplate I guess?

Jamie: Exactly! Good catch. Mike originally wanted to bring back the old baseplate, but it would've been quite a large display stand for the size of model that we are doing. So this is a close approximation that we brick-built ourselves. 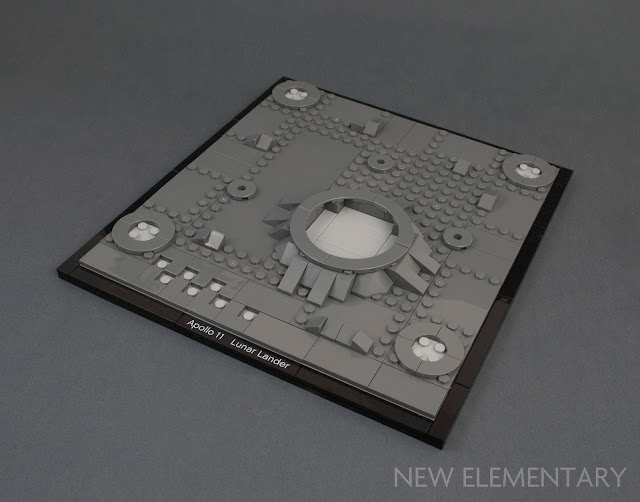 So what other play features does the model have?

Jamie: Of course we made it modular, so this bit can return up to Michael Collins. It also separates out so that you can see the doors that they had to crouch down and sneak through to go across the little plank there, also the little window they had to look out of in order to land it. We have this pull-down panel where you get this little reflector that they put on the moon, and it's still there today, so that you can point a laser beam at it and take a measurement. And then on the back side here we also have another pull down panel where you can have the camera just like on the real one; when they pulled the cord this came down and that's how they videotaped the first steps on the moon. It wasn't Buzz Aldrin holding a camera or something! 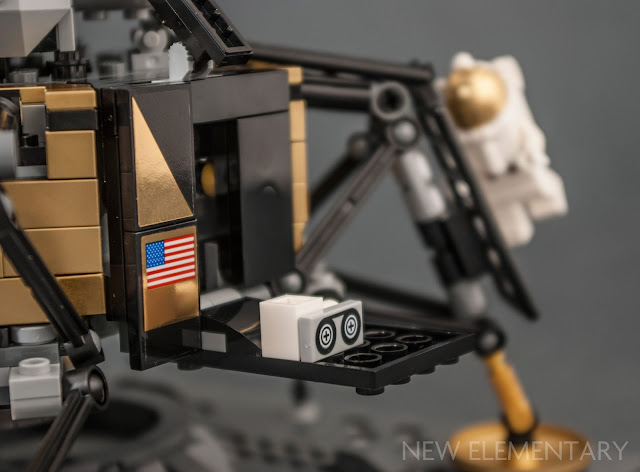 What other real life details have you included?

Jamie: You can see the fuel tanks on the inside and there is some neat geometry here. As far as the way this comes together, it's quite interesting. One of the little details on this which is authentic to the original spacecraft, beside the little doors to come out we have a little plaque under here which is Richard Nixon's little signature celebrating the event. Inside details are quite sparse but you can see some of the control knobs and things. 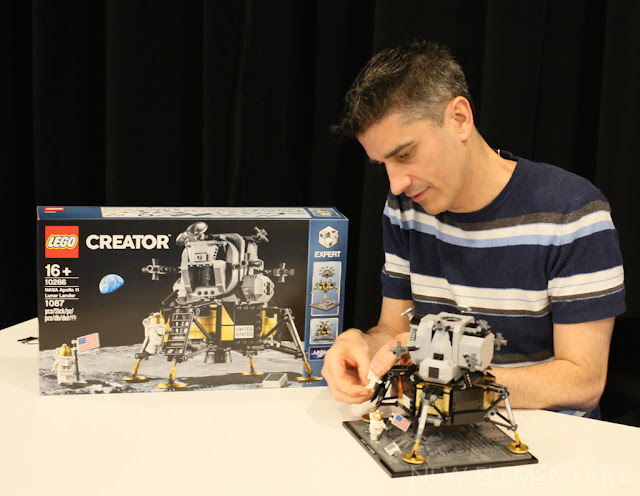 Do the minifigures fit through the doors with all their kit on?

Jamie: Yes, that was one of our design challenges actually! [Jamie demonstrates] Wheee! There's also space so that you can actually position them inside. 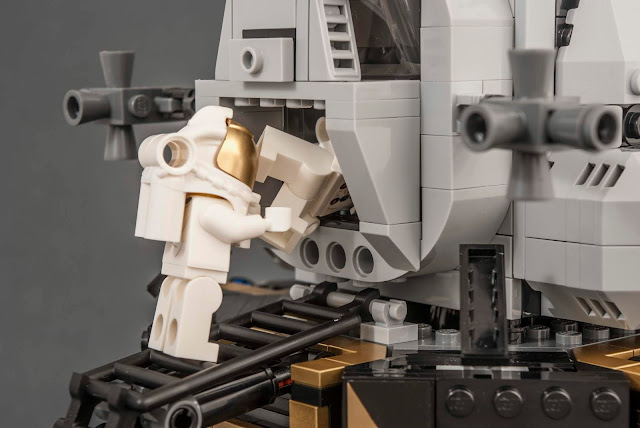 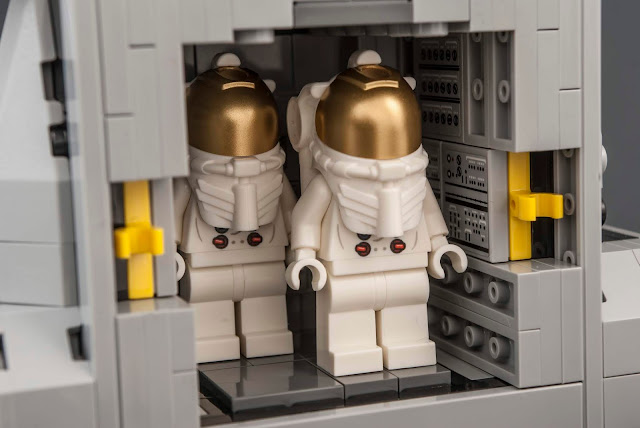 And so many gold elements! Including new ones.

Jamie: Yes, you’ve got the corner tile there in drum lacquered, also the 1x1 tile in drum lacquered. Also some foil stickers. Of course the figures have unique printing on them as well: The NASA logo on their chest, it's officially licensed (as best they can as a government agency) but they did help us with some of the details, making sure they were authentic. Also, I’m not sure if its out in other sets yet but we have the 1x3 inverted tile in light grey. Sometimes grey is overlooked as something which is an interesting colour change.

Not by us! Actually I have been surprised by how much that 1x3 inverted tile has been getting used in sets given that it has that strange hole in it.

Jamie: The origins of it well that they needed a way to not have Unikitty’s head fall off so easily and they tried a bunch of weird stuff but in the end they just said, we know we have better grip on the round 1x1 [with vertical bar, Design ID 20482]. And then they just kind of ended on that. But you're right, it's a surprising one and I was initially like, “ah! Why did they have to put a hole in it because I love inverted tiles”. We often aren't using the hole, but just to have an inverted tile is already a win. The measurement’s been pretty okay, it has helped us in various places… I was almost going to mention something else but it's a product that is coming in September. So we are using it, for sure.

We will eagerly look for that in September! Thanks for your time Jamie and congratulations to Lars and the team. 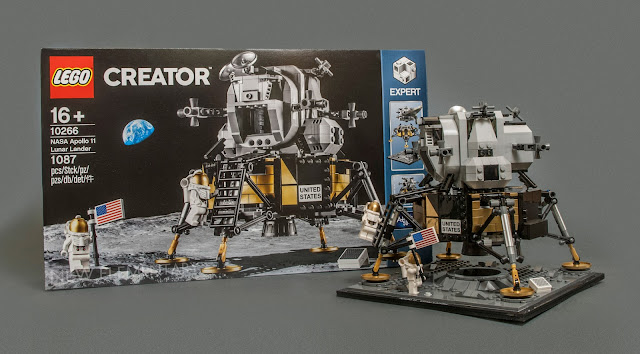 READ MORE: See the cool techniques and new parts in our review of this set

Products mentioned in this post were kindly supplied by the LEGO Group. All content represents the opinions of New Elementary authors and not the LEGO Group. All text and images are © New Elementary unless otherwise attributed.
Admin: Tim Johnson Posted on 6/03/2019 03:30:00 am
Email ThisBlogThis!Share to TwitterShare to FacebookShare to Pinterest
Labels: Creator Expert, Inside LEGO, Interview, Space