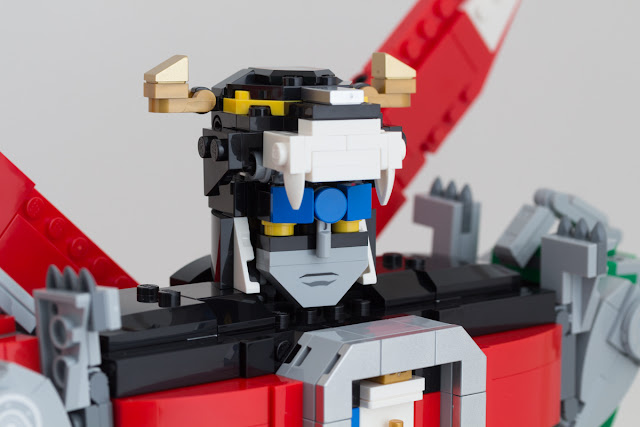 Voltron is constructed lion by lion. Each lion has its own separate building guide, so should you feel inclined, you can easily share the building process with a friend. Once all five lions have been built you can combine them to form Voltron. The Blue and Yellow Lions become the legs; the Red and Green Lions form the arms, and the Black Lion becomes the torso and head. 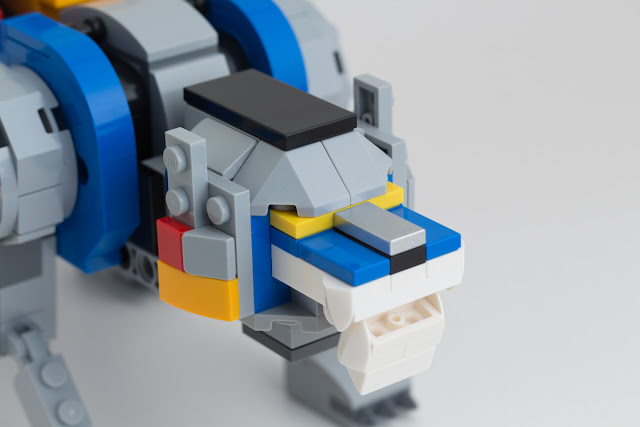 The transformation is straightforward. The Blue and Yellow Lion rotate at their necks, each swinging upward and snapping into place to become a foot. The lion’s legs are then folded up, and along with its tail, tucked close to the body.

As the core of the model, the Black Lion requires a bit more work. The wings unfurl and rotate upwards and the tail is positioned flat against its back. The back legs are then removed, rotated 90°, and reattached; similarly, the front legs are removed, rotated 180°, and reattached. The rear legs can then be inserted into back end of the Blue and Yellow Lions, locking into place with four points of clutch (two clips and two hinges).

The Red and Green Lions’ transformation is comparatively simple, only requiring that the legs are folded up and positioned close to the body. Once done, the lions snap into place on the either side of the torso via Technic pins. The final step of the transformation is to pull open the Black Lion’s jaw, and via an ingenious two-hinge construction, reveal Voltron’s face. 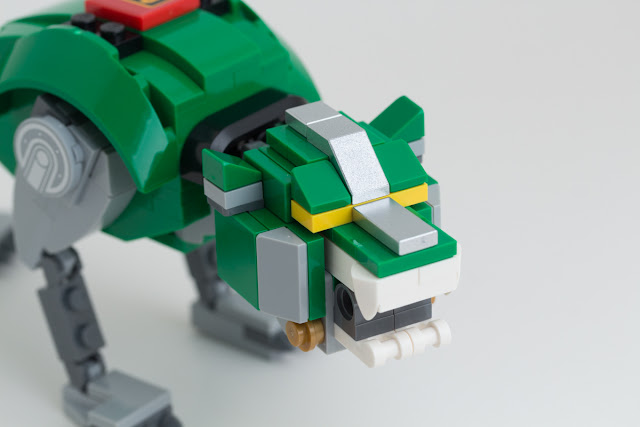 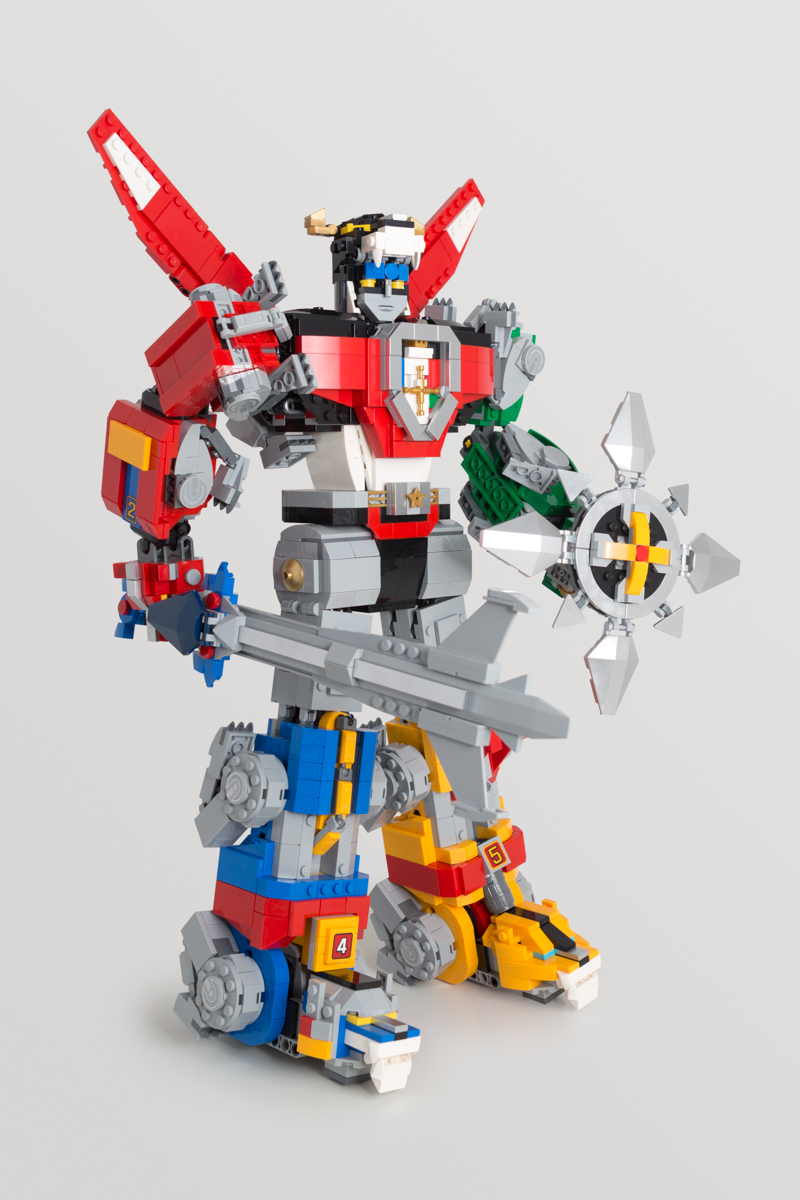 The first thing you notice about the completed model is its height; at 45cm/17.75in, it somehow seems even bigger than the sum of its parts. And that height brings heft. Voltron weighs a whopping 1.6kg/3.53lbs, making it a Modular on stilts. LEGO Designer Niek van Slagmaat was tasked with translating Leandro Tayag’s Ideas project into a shipping product; in our interview with Niek, he talks about the challenges of accommodating the model’s significant weight.


READ MORE: LEGO designer Niek van Slagmaat explains the challenges of creating Voltron
The main casualty of this weight is leg articulation; unfortunately, the legs needed to be fixed in position in order to support the model reliably. The last thing The LEGO Group (or its customers) want is a model of this weight toppling over with the slightest nudge. 1.6kgs is not inconsequential; in addition to the potential damage done to the model from a fall, it poses a real danger to small children and pets. In its fixed position, the centre of gravity is consistent and weight distribution can be controlled. It’s spread evenly across both legs, balanced at the front and back by the extension of the feet.

Happily, the arms have a good measure of articulation. The shoulder joints were specially designed to support the weight of the Red or Green Lion with an attached accessory (i.e., the sword or shield). According to the booklet included with the set, over 30 different shoulder joints constructions were tested. The final model features a dual-gear system with tension provided by a ball joint rotating laterally in its socket. It’s a brilliant solution that works very well. 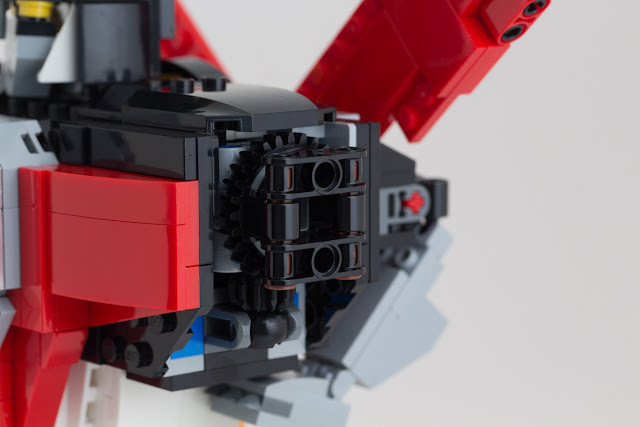 Voltron makes great use of existing parts and includes relatively few recolours (with one key exception – but I’ll get to that later). And it should be noted that there are no new part moulds, which is standard for LEGO Ideas sets. 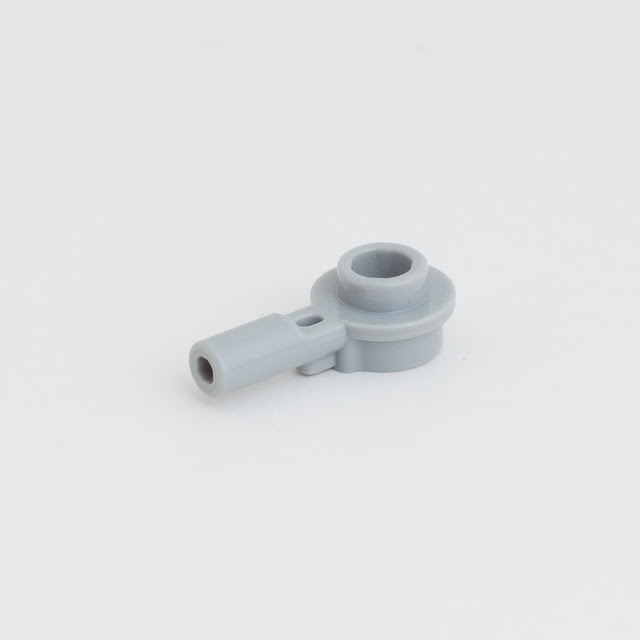 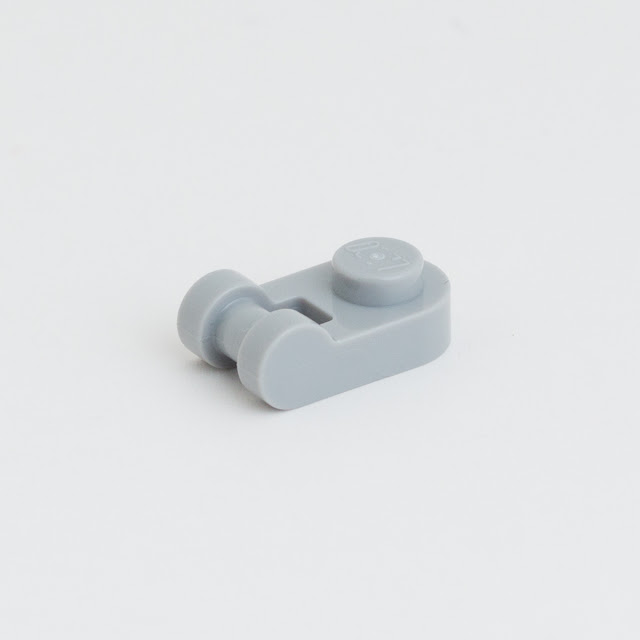 The similarly named but very different Plate 1x1 Round w/3.2 Shaft (6225246 | 26047), now also in Medium Stone Grey, is used in the shield assembly to position the small silver signs. The part’s rounded back allows it to rotate 45°, placing the silver signs on the perimeter of the shield between the silver windscreens. 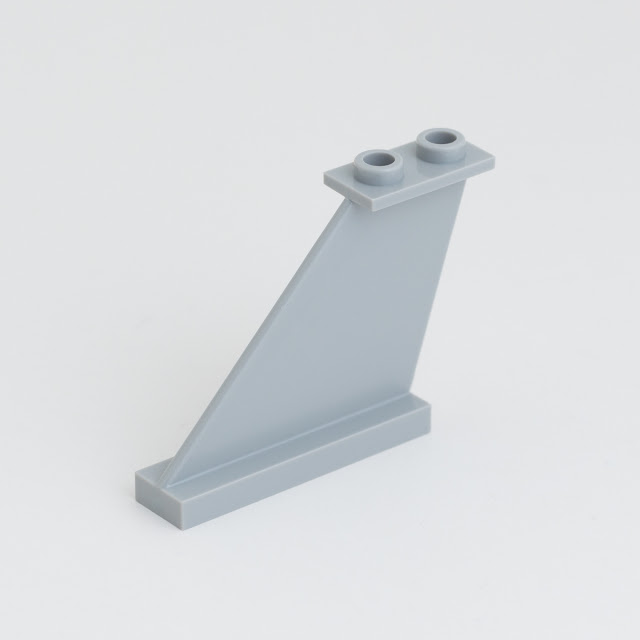 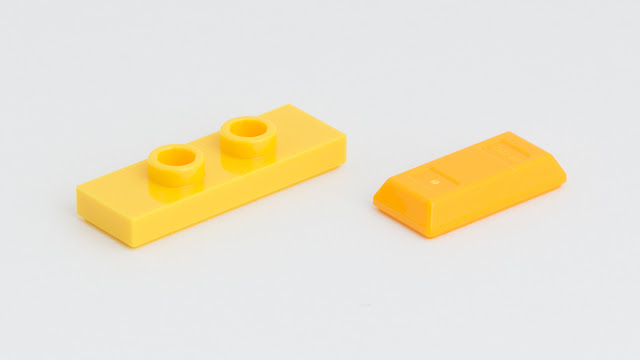 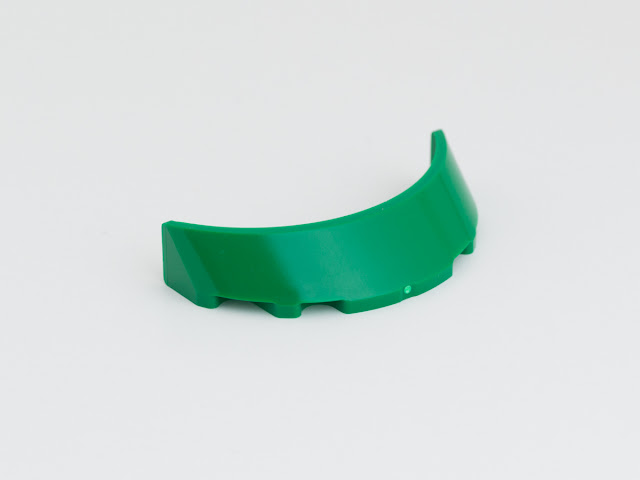 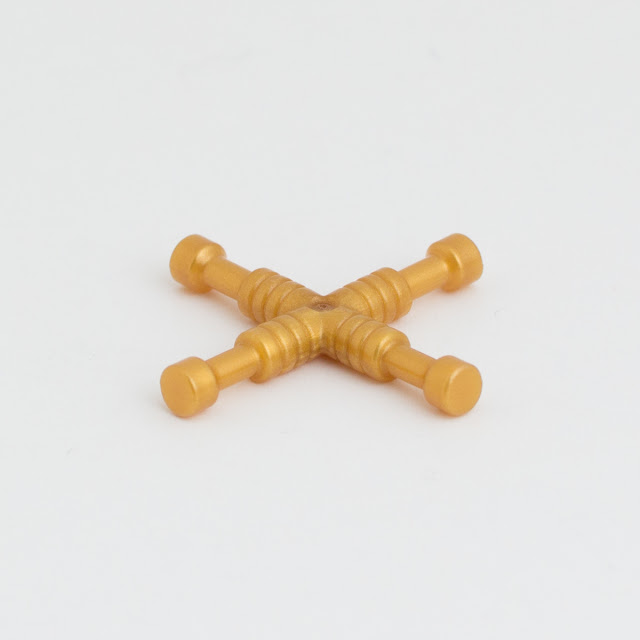 The cross symbol on Voltron’s chest is perfectly represented by a lug wrench in Warm Gold [TLG] / Pearl Gold [BL]. This lug wrench is part of a full Pearl Gold tool set (6236644 | 11402), which will surely prove popular for golden detailing and greebling. 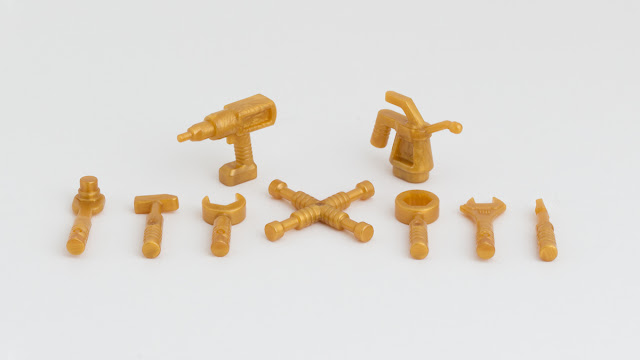 READ MORE: The two LEGO silvers explained in Sven Franic’s 10262 James Bond Aston Martin DB5 review
The exception I mentioned earlier refers to Voltron’s scores of recolours in Silver Ink [TLG] / Metallic Silver [BL]. Silver Ink differs from Silver Metallic [TLG] / Flat Silver [BL] in that the brick colour is achieved by coating the plastic part with a metallic finish, a process that lends itself to much shinier bricks than possible with plastic alone.

Voltron includes nine parts in Silver Ink, eight of which are entirely new with this set. 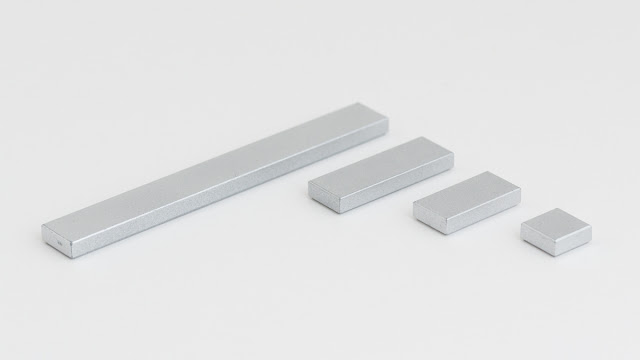 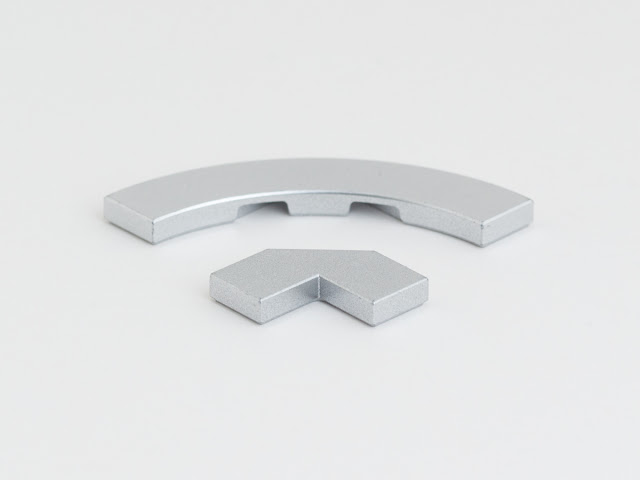 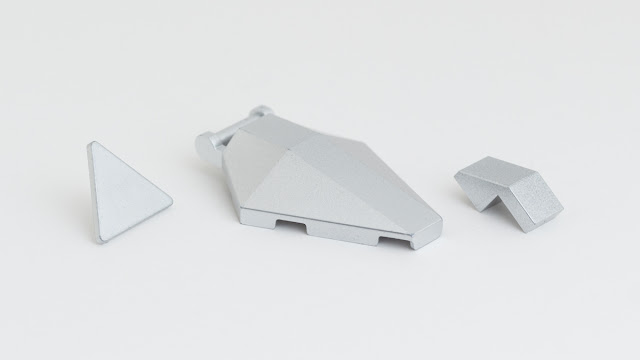 Giving the shield its silvery star shape are four triangular signs (6237126) and four 6x4x1 hexagonal windscreens (6237130). The set also includes silver 1x2 roof tiles/slopes with cutout without studs (6231727), which neatly connect the silver tiles that flow down the heads of the Red and Green Lions.

Almost every detail of Voltron is wonderfully brick-built, so printed parts and stickers are used sparingly and their simple designs complement the overall aesthetic. 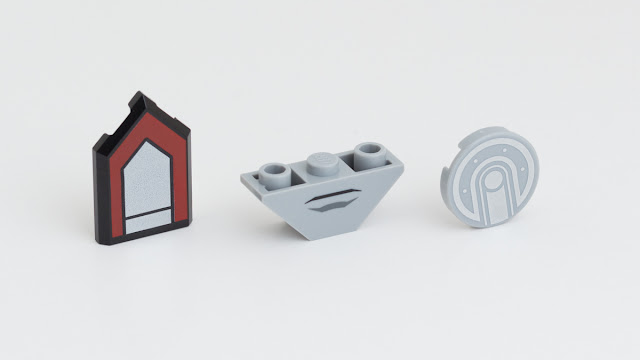 On top of the head there’s a Black shield tile with red and silver decoration (6247143). A Medium Stone Grey 1x3 inverted double slope with a mouth print (6237234) forms Voltron’s chin, and each shoulder assembly on the Red, Green, Blue, and Yellow Lions features a  Medium Stone Grey Round Tile 2x2 with a mechanical joint print. Stickers are used exclusively for numbering the lions, and match the styling of the original toys. 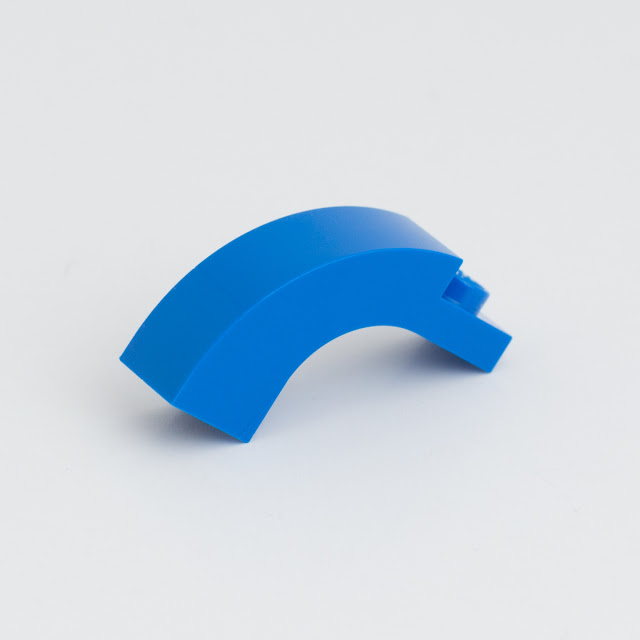 21311 Voltron is great fun to build and an amazing bit of engineering, with five separate models combining to form a single giant robot. Whether you’re a fan of the original cartoon (upon which this set is based) or the new series on Netflix, you’ll find lots to love in this set. (Especially the Silver Ink parts!) 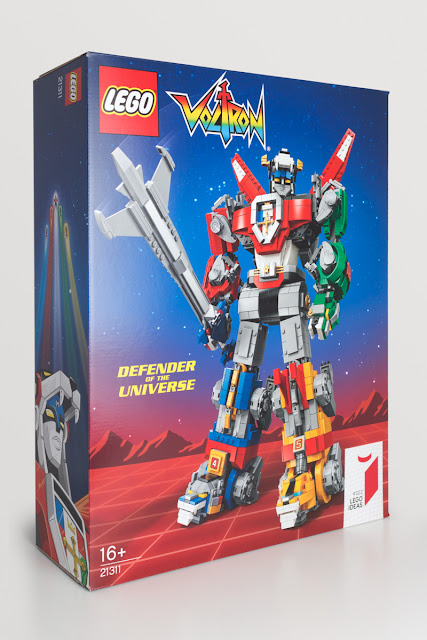 READ MORE: Check out what you can do with the new wand from Harry Potter

Products mentioned in this post were kindly supplied by the LEGO Group. All content represents the opinions of New Elementary authors and not the LEGO Group. All text and images are © New Elementary unless otherwise attributed.
Posted by: Admin Posted on 8/07/2018 08:25:00 am
Email ThisBlogThis!Share to TwitterShare to FacebookShare to Pinterest
Labels: LEGO Ideas, Set review, Space