We set Kevin Levell an epic task: to come up with his own original build using only the parts found in the latest wave of LEGO® Star Wars sets. That's seven sets with over 3000 parts at his disposal! Kevin shows us today what he's come up with and describes the creative process.

The challenge was to build something from the newest wave of LEGO® Star Wars sets but throughout the building process, one of the biggest temptations for me has been to sneakily/subtly add to the available selection of parts from my collection. I have remained disciplined, using only the parts contained within sets 75206, 75207, 75208, 75209, 75210, 75211 and 75212.

I had a number of ideas I wanted to explore, and I experimented extensively with various building techniques along the way in order to try to realise some of them. What I have finished up with for my main build is a long way from where I started out. 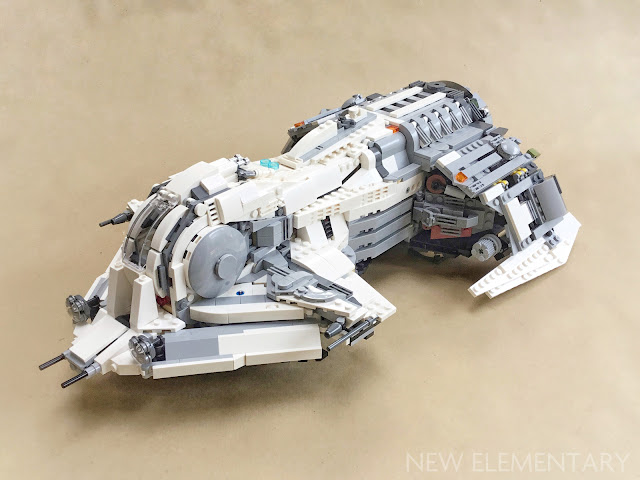 Initially I had plans for something grand. A control ship, a space station, something using at least 90% of the pieces or all if I could manage it. I'd even contemplated something swan-like. 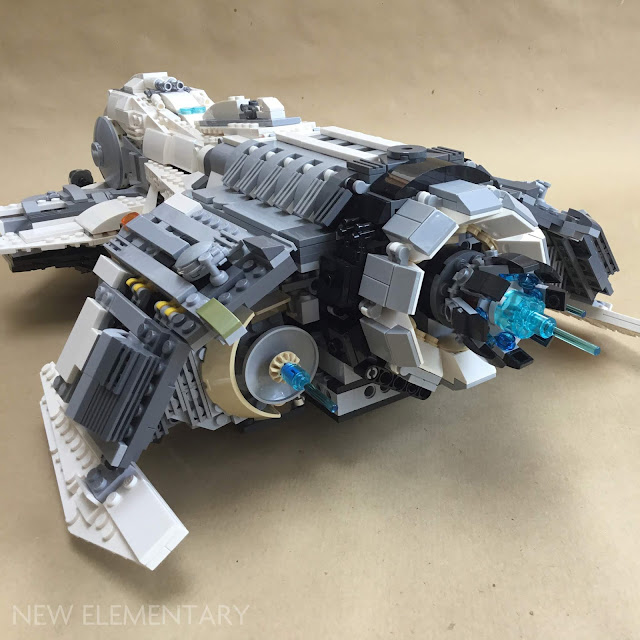 I began by extracting all the Technic pieces and large or long plates to build a framework from.
My structure fairly rapidly began to emulate a Toblerone, yes, one of the nasty newer controversial gappy ones. I knew I wasn't happy but set about trying to clad it with some of the larger plates. 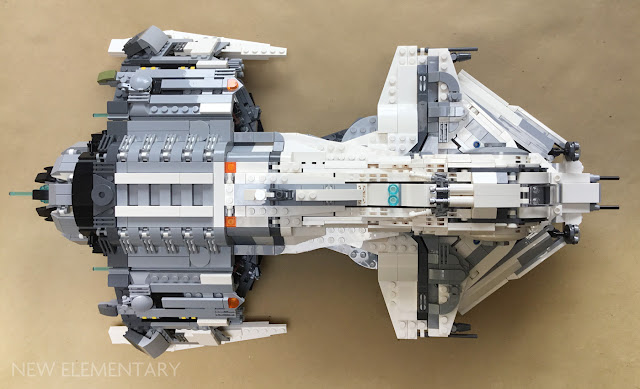 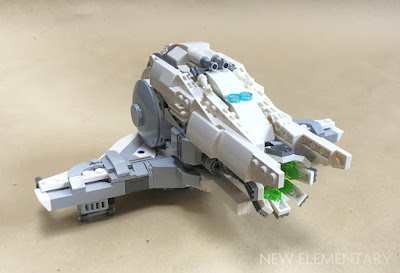 Specifically I had gravitated to the two 8x8 octagonal plates in Dark Stone Grey [TLG]/Dark Bluish Gray [BL] (Design ID 6063) found in 75211 Imperial Tie Fighter (Amazon USA). I had the intention of building doorways using these and the two 6x6 radar dishes (Design ID 44375); one in white, one in Medium Stone Grey [TLG]/ Light Bluish Gray [BL] and after a bit of tinkering and sort of failing to build what I'd set out to, I had the first thing I liked: something that looked a little like a prawn, the beginnings of a spiral, something vaguely "foetal" (I thought). I detached these from the fuselage and put that initial structure to one side. 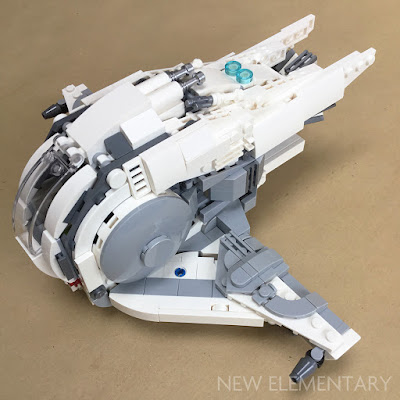 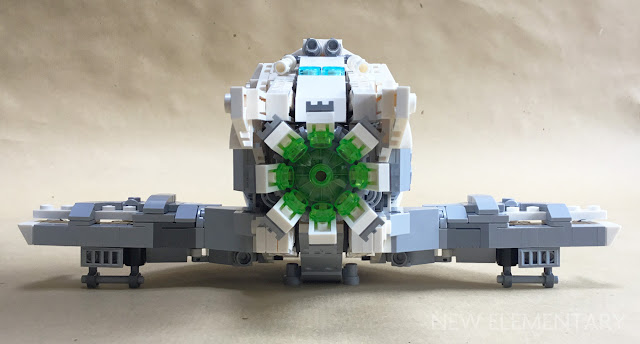 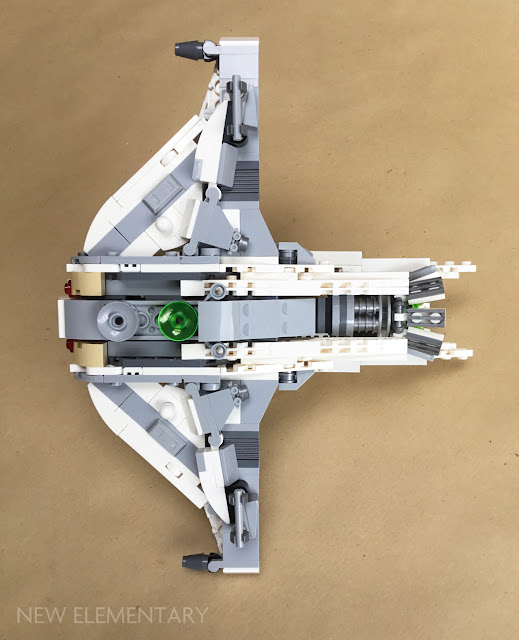 There were four potential windscreens (for my alternative build) available across these sets. 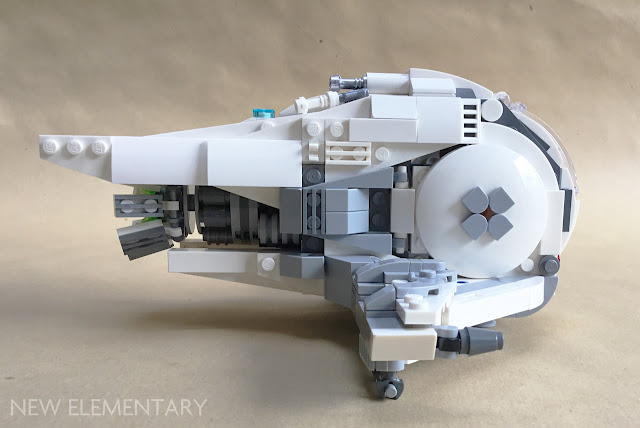 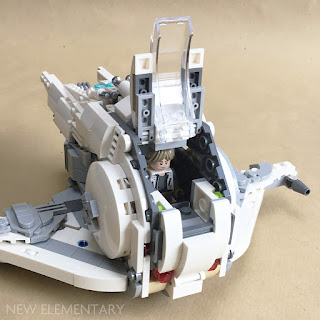 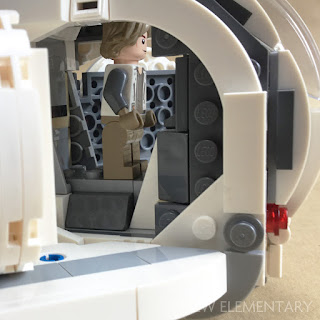 Suddenly I felt I had the beginnings of something I wanted to pursue. Something familiar perhaps, but my realisation of what I was echoing was yet to come.

The smaller ship docks into the part I've been thinking of as the Mothership. 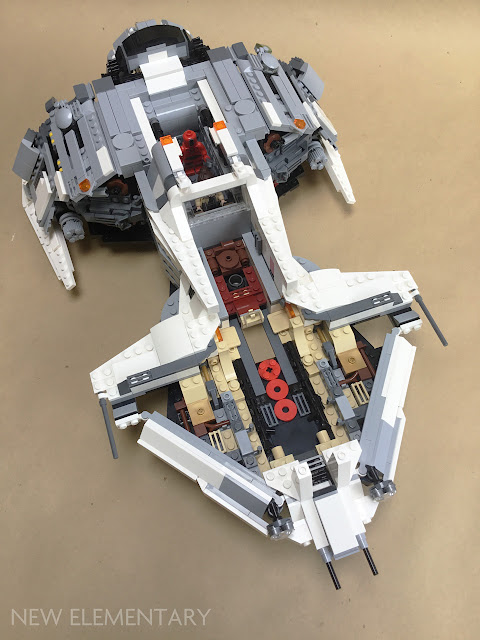 I don't have good names for either of these ships but I have realised that the smaller ship owes much in its appearance (via subconscious influence I think) to the Firespray 31-class patrol and attack craft aka 'Slave 1'. Any suggestions? 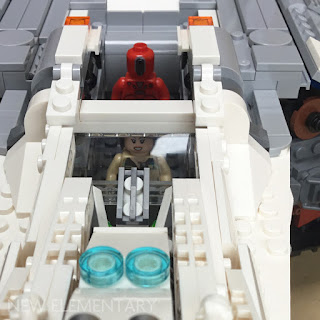 I would describe my building style on this project as sculptural, I was pushing blocks, bars, hinges and plates around (much as I would clay or wax) until I found things I liked the look of. It would be a stretch to say I was 'led by the LEGO', but the components themselves certainly influenced the final thing (by their very natures) and as the build progressed, simply by increasingly limiting my choices as I used the parts up.

I've enjoyed this first build enormously, but I will admit to feeling frustrated when an idea I would have liked to pursue was not possible due to the available store of parts provided by these sets. Various sketch builds/tablescraps have happened along the way and the next build I'm going to attempt finishing is going to be one of these two explorations. It should be possible to complete something using the remaining parts as there are quite a few pieces still to be plundered!

Following that I have in mind to possibly augment both the fighter and mothership builds with a few pieces I have purchased from BrickLink and eBay with a mind to creating something else with these ships.

READ MORE: See all the new parts to be found in this range of Star Wars sets


Products mentioned in this post were kindly supplied by the LEGO Group. All content represents the opinions of New Elementary authors and not the LEGO Group. All text and images are © New Elementary unless otherwise attributed.
Posted by: Admin Posted on 7/12/2018 08:16:00 am
Email ThisBlogThis!Share to TwitterShare to FacebookShare to Pinterest
Labels: Community, Space, Technique