The most common explanation is that they were "the first LEGO colours", but they were obviously not. Even ignoring the old wooden toys and starting our consideration from the first plastic bricks made in 1949, they were made in many more colours than these five. Shown below are a couple of different shades of green used then, and here, for instance, you can find a classification of those first colours. This "colour abundance" was quickly downsized and at the beginning of the 1950s the number of available colours decreased. 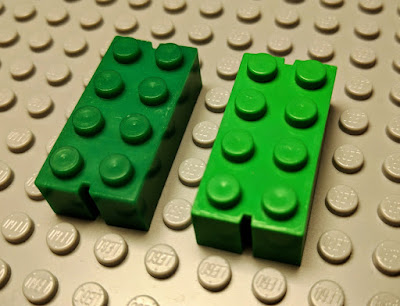 Other people say that the five colours were the colours in production in 1958, when the company requested the patent for their new brick design with bottom tubes. But again this is not true; there were many more colours in production then, if you consider all the LEGO System parts like trees, road signs, vehicles, baseplates and so on.

Were they, then, the colours in production for LEGO bricks in 1958? We're getting closer, but we're not there yet. Because, quite strangely, in 1958 there were no black bricks.

The final answer is probably the simplest. And I say "probably" because I haven't found an official explanation yet (if such explanation exists). Looking at the dates I think we can reach a reasonable answer: those five colours were the colours of the bricks in production in the moment they started using that logo, so in 1963-65. A bit anti-climatic, maybe?

As I said before, the missing colour was black and black bricks certainly must have debuted between 1960 and 1963 (see the discussion below this wonderful LEGO Color Chart that you might have already seen in Bricks magazine #14 or on this very site). The 1960 year is fixed by a German catalogue that includes everything for sale at the time, and that doesn't include any black bricks. 1963 is fixed by the fact that black bricks made in cellulose acetate (CA) exist (even I have some, as you can see in the next photo) and in Europe, CA stopped being used in 1963 when the company moved to using ABS. LEGO historian Gary Istok says that black actually started being sold in 1961, appearing first in 1962 catalogs. 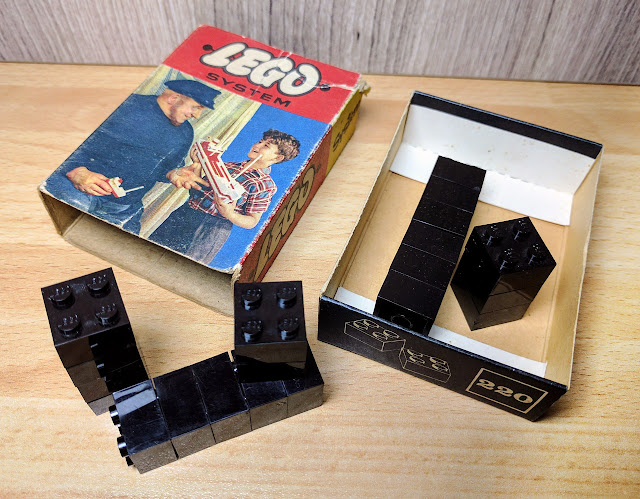 So in 1963, besides the "colour" transparent (which clearly does not concern us here), you could only find yellow, red, blue, white and black bricks in production. Exactly what we needed.

Let me stress, again, the word "bricks", because at the end of 1962/beginning of 1963 the first small plates were created, in light grey. And I'll also add a "regular" to that "bricks", because 1963 also saw the birth of Modulex bricks, and they had a completely different (and larger) colour palette.

In 1973 the LEGO logo changed again (the word "System" disappeared and the logo started looking very much like the current one) and the link with these colours, after a few cases where they were still used together with the new logo, was gone.

Just the link with the logo was gone, though, because the five colours were then used for many years on catalogs and advertising material (and on a few parts too, as shown above! The flag was sold in three sets released between 1985 and 1991. The torso and tail as well as some other parts and stickers not pictured here come from the 1985 and 1990 airport sets; the logo of which included the colours). And this still happens today, sporadically, even though now the colours are mainly used to give a "vintage" feeling... for example the old logo with the colours is used on the recent LEGO employee 2016 gift set, shown below.

Here's a video I found on YouTube with old LEGO Space commercials; some of them feature the five colours at the end (and sometimes the stripes are animated using 6x bricks).

In the AFOL community, these colours are fondly remembered and often used. For example they're part of the Paredes de Coura Fan Weekend's logo and buildable mascot. And even the logo of my LUG, ItLUG, includes white, red and blue - and not green, as anyone would think appropriate for Italy - for this reason (maybe a bit retconned). And they clearly feature in the Portuguese LUG Comunidade 0937's logo too... I could go on and on!

In closing, I'm not 100% sure that the origin of these five colours is really this, but it seems to be a plausible theory. If anyone has any corrections or any more data... please, let me know!


READ MORE: Before DUPLO, there were Jumbo Bricks