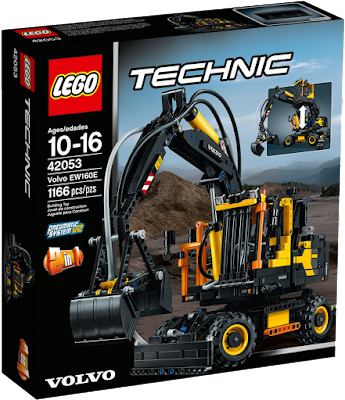 It has become a welcome tradition to provide the bigger Technic sets with boxes that can be easily opened and flattened. This Volvo excavator is no exception. The box has a square shape and shows the main model on its cover against a rough terrain background. An insert shows one of the two geared functions, namely the lifting and lowering of the cabin. This is just like the real thing which, it is interesting to note, is not shown at all on the box. It is not pictured until the last few stages of the instructions. 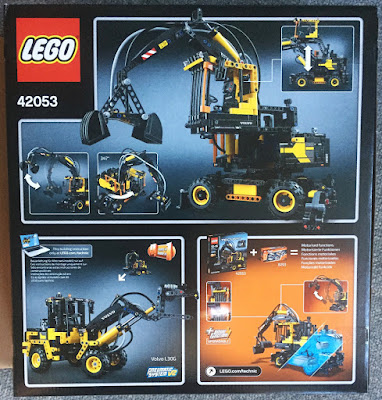 The back of the box depicts some more information: the upper half shows the excavator can turn 347° (yes you read that right, it doesn’t turn around freely) and besides the raising and lowering of the cabin we already got familiar with on the front of the box, it shows just one pneumatic function. A rather odd choice since the machine has three degrees of pneumatic movement. The bottom of the back of the box shows the B-model, a Volvo L30G Compact Wheel Loader for which instructions are solely provided online. And at the bottom right it shows the main model can be upgraded with Power Functions.

Once opened we see a 252-page instruction book with a rather extravagant sticker sheet sealed in plastic. An amount of 41 stickers for a set this size is rather insane. It must be pointed out, however, that 18 stickers are used for the B-model. I never actually apply decals on Technic sets (as you can see from the pictures in this review) and leaving them out becomes somewhat of an issue with the left side panel of the excavator, which is black but becomes partially yellow with the application of the biggest of all the stickers. Leaving this sticker unused very much alters the overall look of the set. The box contains 11 bags of regular parts, one bag with pneumatic pumps and valves, one bag of pre-cut pneumatic hoses and four loose tyres. 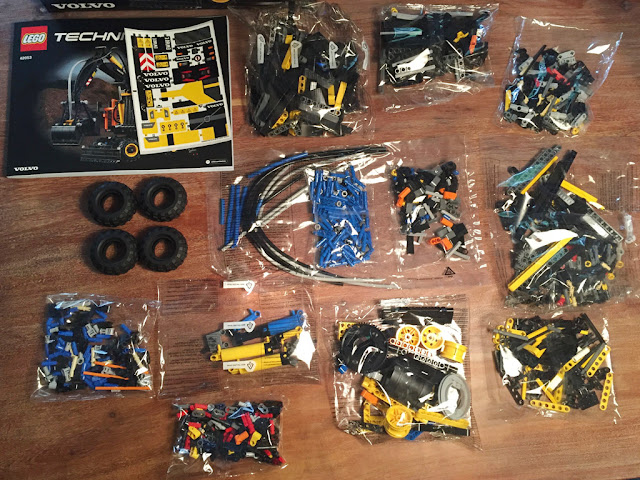 This pneumatic set only contains one new part: a pneumatic pump. For the last few years, pneumatic sets have all came with a motorised compressor. In fact, the last set that had a pump that had to be manually operated was 8049 Tractor with Log Loader, in 2010. That was also the last time the stud-based yellow pump (Design ID 74720) was officially seen.

To make all pneumatic parts studless, this old pump has been replaced by a new 3-stud wide pump in Black and Bright Blue [TLG]/Blue [BL] (Element ID 6152004 | Design ID 26280). Its spring now resides inside, causing the Black portion to be unnaturally thick. This feels very "un-LEGO-like", but the pump works like a charm. 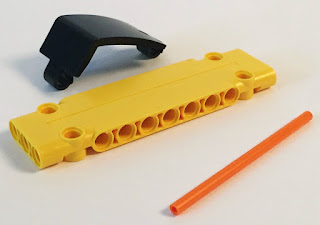 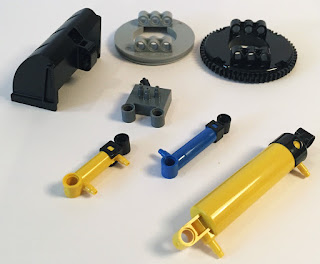 Other interesting but not-so-new parts are the clamshell digger bucket pieces, the wider turntable and the newly moulded pneumatic pieces which all came with 2015’s Mercedes-Benz Arocs 3245. 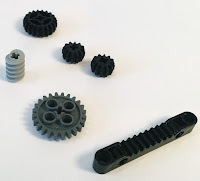 It may also be of interest to know that this set has only six gears (incl. one gear rack) of which two are merely used as knobs, to move things into motion. This certainly is a set for fans of tubes and valves, because gear-wise it may be somewhat of a disappointment. 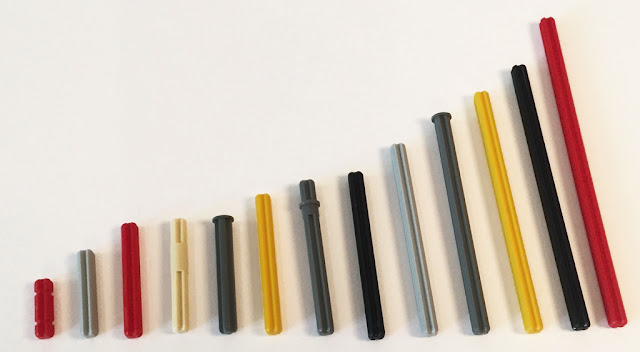 A final observation when looking at the inventory is the use of colours for the axles, sometimes referred to as ‘colour barf’ by the fan community. You get 12 different axles in five different colours. The 12L axle in Bright Red [TLG]/Red [BL] hasn’t been seen in this colour since 2005 and may be useful for builders that enjoy designing supercars. Regardless of its potential use, I am still not a fan of this rainbow assortment. The LEGO Group do this so as to not confuse younger builders, but since the instructions also contain 1:1 examples of the axles required, it seems rather redundant. 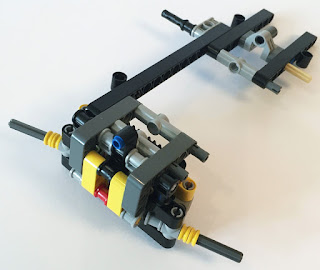 Building this excavator is pretty straightforward and starts with the lower portion. It is worth mentioning the last time the LEGO Group released a wheeled excavator was with set 8837 in 1992! So it is somewhat of a welcome treat to build a wheeled one and not have to focus on joining endless amounts of thread links.

That said, the build of the lower part of this Volvo EW160E is as simple as it can possibly be. It starts with the front steering unit, which is operated with a long axle. There you go: half of the six gears already have been used. 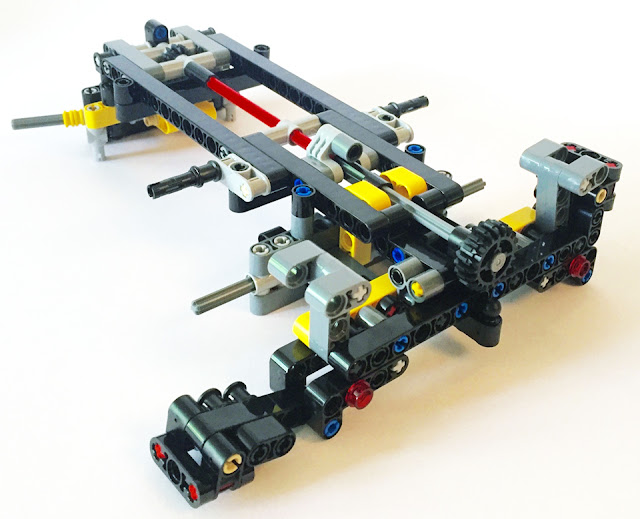 This is followed by a similar back unit that also has the beams necessary to mount the outriggers. It is somewhat disappointing that these have to be moved by hand. Nonetheless, the designer did include a rather intricate locking system that consists of two dark grey beams that can either be stored upwards or turned downwards to keep the outriggers in place Nifty! Yet, it would have been nice if these outriggers could be lowered and raised with a gearing system going through the central turntable. This would perhaps been too much of a hassle, considering we are dealing with a moving cabin. I see a challenge for builders here. 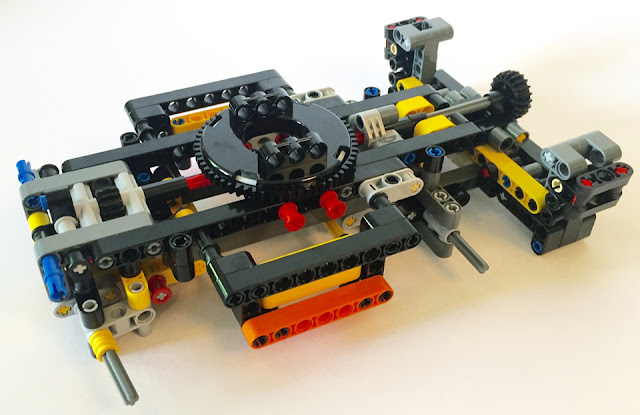 Next up is the central turntable, which also has no gearing, meaning the upper portion of the excavator has to be moved manually. To finish the lower half of the build there is a black plough that has to be lowered by – you could have guessed – hand. It has some kind of lever whose placement and movement is somewhat confusing and not all that effective. 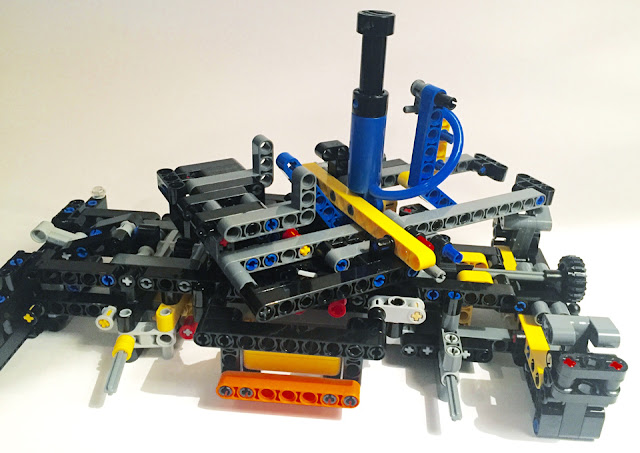 By far the most interesting part of the build is the upper half. It starts by attaching beams and liftarms to the turntable. With this model you cannot construct the entire upper portion and then click it on the turntable. Inside the jungle of beams, one Liftarm 1x2 with Bar (Design ID 85940) is placed. This causes the upper structure only to make the aforementioned 347° turn. This is somewhat of a peculiar choice, since there are no axles or pneumatic hoses going through the centre so no restrictions are present to make a full 360° rotation. Further inspection of the back of the instruction book, where the addition of Power Functions is explained, gives you the answer. A wire for the motor has to go through the centre of the model and a full turn would make it twist and tangled. 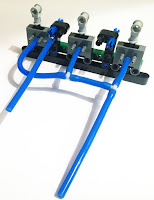 With the installation of the new pump, the first pneumatic elements are introduced. This is followed by three pneumatic switches. It is funny there is also a blue hose installed with a T-piece that clicks right into a Technic beam. It is there to make motorising the set a little easier, but for the time being it is completely useless. Another strange inclusion is a Dark Green [TLG]/Green [BL] Technic beam that is hidden inside the model and forms the basis of the row of pneumatic switches. The back of the switches is gracefully protected by some panels and then the whole unit is mounted onto the rest of the model. 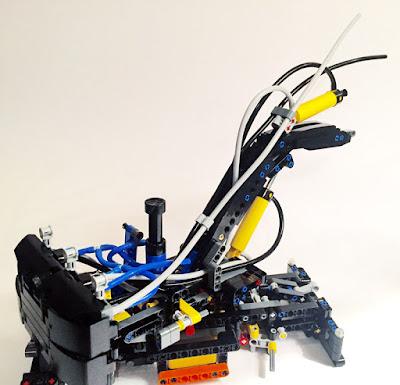 Then it is time to construct the arm of the excavator. Nothing special going on here, although the use of slopes and Technic bricks gives the arm a nice curved look. The pneumatic hoses that go into the valves are Black and Medium Stone Grey [TLG]/Light Bluish Gray [BL] and are guided by a whole bunch of axle connectors. When the arm is attached to the rest of the model, it is time to build the right hand panel. It includes a pneumatic compressor, which is left unused if Power Functions are not added. 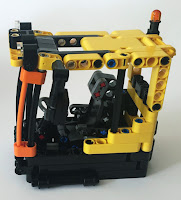 Next is the rather simple build of the grabber and the cabin. It is worth mentioning the latter is extremely dense with lifarms and beams, making it quite heavy. The cabin, which is half-black and half-yellow, can be moved with a simple worm screw arrangement that turns out to be quite flimsy. Considering the weight of the cabin, the designer should have come up with something more substantial.

This utterly satisfying build is concluded with some finishing touches like a black left side panel and some orange railings. 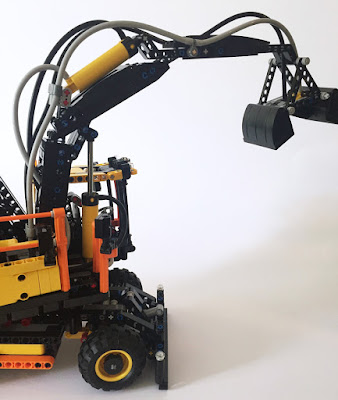 As I mentioned repeatedly in this review, three functions (the movement of the outriggers, the front plough and the rotation of the superstructure) are all done manually. The LEGO designers have decided to put all emphasis on the pneumatic and kept the amount of gears to an absolute minimum. That is defendable choice, but also feels a bit of a letdown. Surely they could have come up with some form of system to make the movement of these elements a bit more attractive.

The steering is as straightforward as it could possibly be and the raising and lowering of the cabin is a bit unstable and shaky, due to the weight of the cabin. The pneumatics work as they should, but because of its weight, the arm is likely to freefall once the designated switch is operated. Also, as with last year’s Arocs, I found the pneumatic valves suffer from some sort of leakage. I left the excavator arm up and when I returned home a couple of hours later it had fallen down. 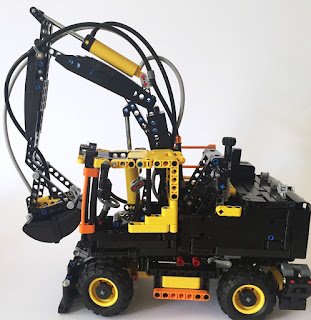 The instructions also contain two errors. Nothing severe, but these may be confusing for younger builders. I have notified the LEGO Group of these mistakes and I assume they will be fixed in further printings.

You can motorise this set with Power Functions 8293 but be warned: never ever I saw such an extensive way to include both LED lights and an M-motor. Even though a lot of the required arrangements are built in, a lot of parts still have to be removed and reinstalled to make this Volvo EW160E run on its own.

Considering its affordable price, this is a very good set. The license hardly plays any role and you also get just about every pneumatic piece there currently is on the market. This is a recommendable set, yet it has quite some flaws that ask for (AFOL) improvement. 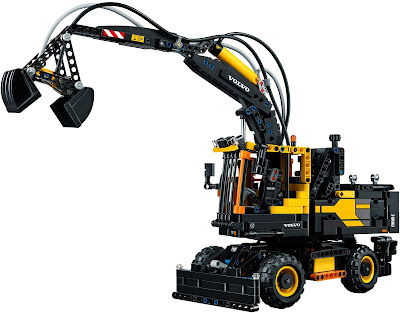