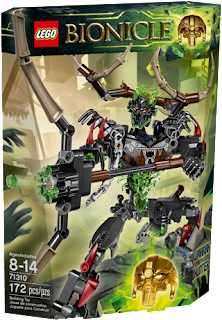 We return to our LEGO® BIONICLE reviews today and this time it is the turn of Andrew Barnick to look at one of the 2016 sets, 71310 Umarak the Hunter.

Bionicle’s second year may have brought new forms and allies for the heroic Toa, but what are heroes without a villain to fight? Umarak the Hunter is the Toa’s newest foe, and may be one of the most impressive villain sets of the rebooted Bionicle theme. Umarak may share the $19.99/£14.99/19.99€ price point with the largest standalone Toa sets, but at 172 pieces, this set has more parts than any other set in the rebooted Bionicle theme (including more expensive combo sets like last year’s 70795 Mask Maker vs. Skull Grinder or this year’s 71311 Kopaka and Melum Unity Set). And as is to be expected for a new Bionicle set, many of those parts are brand-new designs and recolors. Let’s take a look!

Like the Toa, Umarak features a new blended mask design (Element ID 6135060 | Design ID 24164). But while the Toa’s masks feature a clean split between a solid-colored bottom and a crystalline top in either silver or a transparent color, Umarak’s mask is characterized by an asymmetrical, fractured look, with a black center that fades to Trans. Bright Green around the edges. The resulting look is dark and chaotic, suiting a nefarious villain like Umarak.

Instead of a golden variant of his standard mask, Umarak comes with the legendary Mask of Control once worn by the evil Makuta (Element ID 6135225 | Design ID 24192). The design of this part is not quite the same as how that mask first appeared in the 2D web animations last year, but personally I prefer this new set version, which has a more ornate and regal appearance like its counterpart, the Mask of Creation. The Mask of Control appears in Warm Gold [TLG]/Pearl Gold [BL] and features elaborate runes like those on the Mask of Creation and this year’s Toa masks, but its heavy brows and curved horns help to give it a much more sinister look. Like Umarak’s standard mask (as well as several other mask designs from this year and last year), the Mask of Control is designed to be able to fit over a figure’s head even when that figure has horns or antlers like Umarak does. 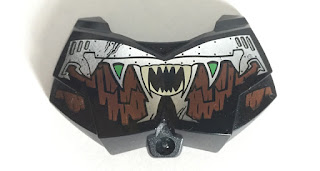 Instead of a new torso shell like this year’s Toa use, Umarak pairs the ribcage shell from last year’s villains with a new printed chest plate (Element ID 6135166 | Design ID ). This black chest plate features scratched metal plating and a small set of fangs on top of what looks like layered wood or tree bark, an eclectic blend of mechanical and organic detail. 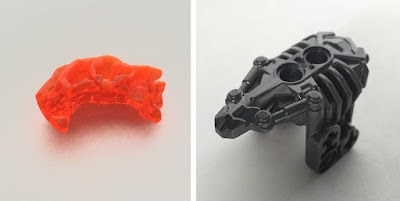 Umarak uses the same short eye stalk and “unity piece” as the Toa, but both of those are in fairly unique colors. The eye stalk (Element ID 6135215 | Design ID 24187) is exclusive to this set in Trans. Fluor. Reddish Orange [TLG]/Trans-Neon Orange [BL], and the unity piece (Element ID 6138237 | Design ID 24191) appears in Titanium Metallic [TLG]/Pearl Dark Gray [BL], a recolor that is shared only with 71301 Ketar Creature of Stone. The eye stalk in particular is a fantastically useful recolor, since not only is it a great eye color for villain sets, but it is also the only fluorescent color that the new eye stalk comes in, which helps to compensate slightly for its poorer light piping compared to last year’s longer eye stalk design. 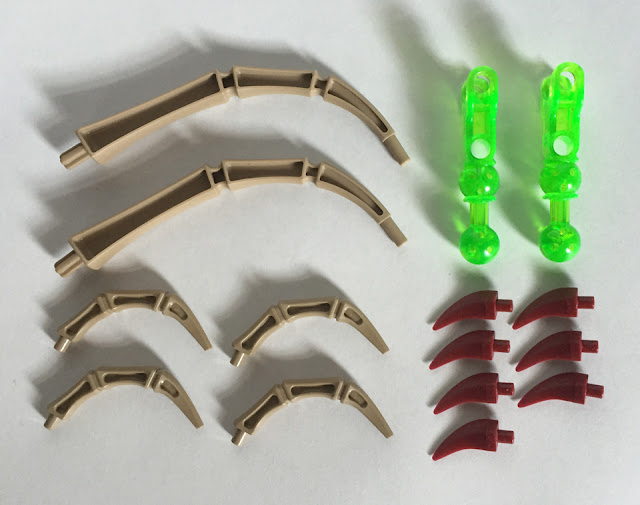 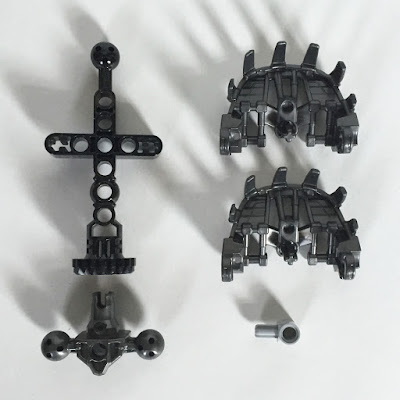 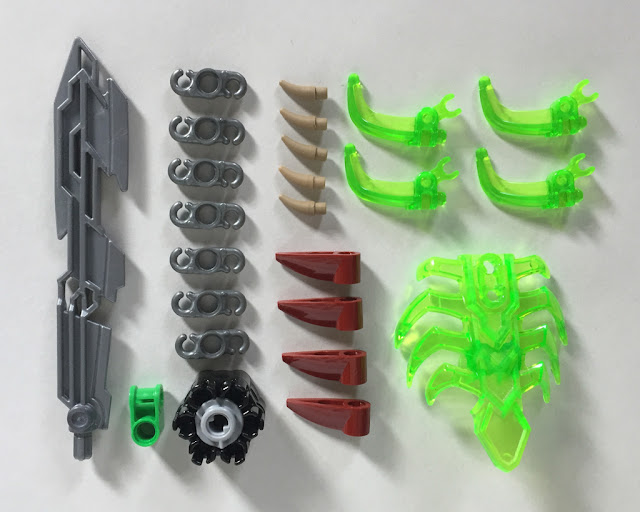 The completed Umarak stands over 11” tall, the tallest Bionicle set we’ve had so far in the new theme. Instead of standard bone pieces, Umarak’s lower legs are built with Technic parts and use CCBS “C” bones (bones which have a ball cup at both ends) for added support. The end result is a leg design that feels almost digitigrade, which combined with the enormous “antlers” attached to Umarak’s head give him a wild, bestial appearance. The thorny Dark Red spikes attached to his legs and arms, along with his Trans. Bright Green, Reddish Brown, Sand Yellow, and Dark Brown accents, also create a very forest-like aesthetic that suits his role as a tracker and hunter. Curiously, Umarak’s shoulder joints are attached lower than those of other sets like Gali and Lewa, despite the added length of his legs and arms making him more suited for higher shoulders in general. The lower shoulders are probably meant to provide more clearance for Umarak’s arms underneath his massive Shadow Trap shoulder pads, but that clearance is not totally necessary and it’s easy to raise his shoulders by one module if you so desire. 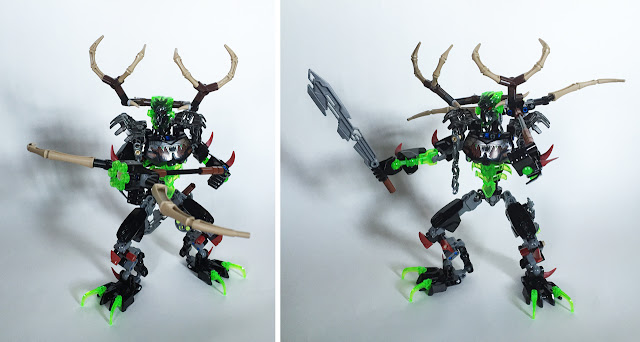 Umarak’s weapons are a longbow/crossbow that uses the six-shooter at its core, and a sword that uses the “hook blade” piece from last year. Both of these are similar to the weapons used by 70791 Skull Warrior last year, but unlike that set, Umarak lacks any effective place to store his bow when using the sword, and the instructions and box pictures give no insight into how his sword is intended to be held. Both weapons suit his hunter motif, though, and the sword holder on his hip even includes a Technic wheel on a chain for storing extra 1x1 ammo for his bow. Also, his waist-rotating gear function works quite well for aiming his bow without having to reposition both of his arms. 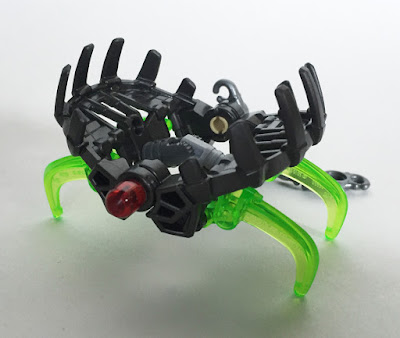 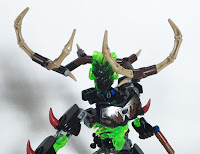 The shadow trap halves used for his shoulder pads aren’t just for aesthetics! The set actually includes extra parts that can be used to convert them and his Trans. Bright Green claws into a functional Shadow Trap like the ones in the creature sets. Unfortunately, removing those parts from Umarak does take away from his appearance slightly, and keeping track of the spare parts necessary for this feature could be a hassle—it would have been nice if those parts could also have been integrated into his build, rather than having to be stored loose.

Like the Toa, Umarak can unite with any of the creatures (at least, once he has captured them). Unfortunately, this works better with some creatures than with others... 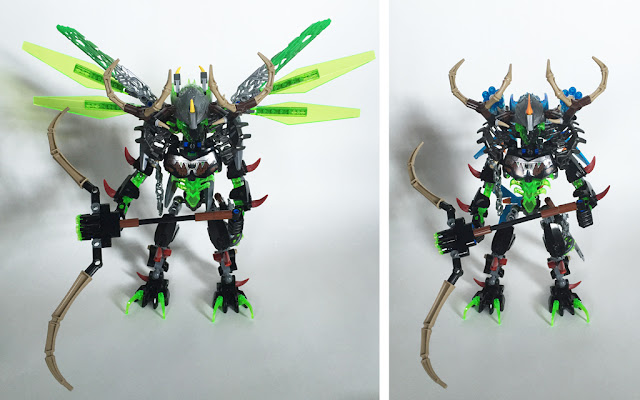 Uxar is a natural fit for Umarak, with a similar color scheme and a function that works flawlessly even when combined (above left). Unfortunately, combining Umarak with Akida (above right) has a much less impressive effect. Not only is Akida’s color scheme less visually compatible with Umarak, but it is also very hard to attach Akida to Umarak’s back with his bulky Shadow Trap shoulder pads still attached. Also, Akida’s slimmer form factor has less of a positive impact on Umarak’s overall silhouette than Uxar, and Umarak’s antlers end up pretty much directly in the line of fire of Akida’s twin six-shooters, undermining Akida’s main function.

Lacking the other creatures, it’s hard to authoritatively judge how well each of them would work with Umarak in practice, but if I had to hazard a guess I’d expect 71303 Ikir Creature of Fire to work best (considering its large flapping wings are very similar to Uxar’s), while the other three creatures might be less visually or functionally impressive but at least would not have weapons that pose a danger to Umarak himself even when united. 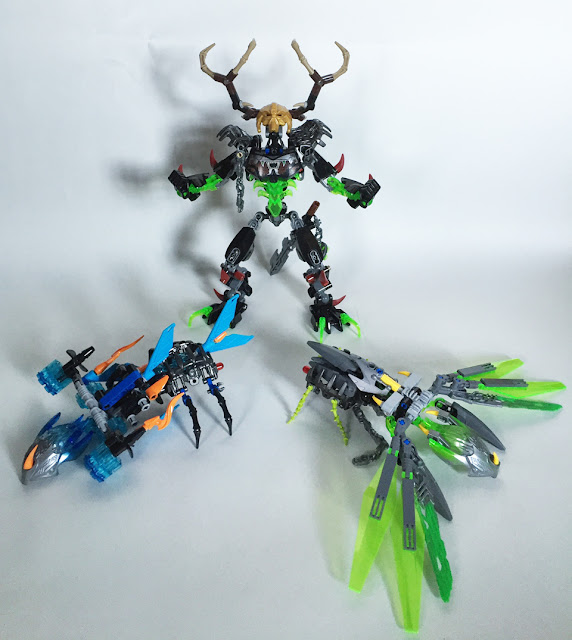 Ultimately, despite a few minor flaws, Umarak definitely fulfills his role as a major new foe for the Toa and creatures. While the mixed sizes and price points of modern Bionicle sets renders the old classification of “Titan” sets (figures that were larger and more expensive than the lower-priced “canister sets”) less useful or specific than it used to be, Umarak is definitely the first new villain Bionicle has had that really comes close, with a huge, complex build that stands taller than even the largest of this year’s Toa. And apparently, there’s even more where that came from—Umarak will take on an even larger form this summer, as 71316 Umarak the Destroyer. It looks like the Bionicle theme is continuing to push toward bigger and better sets, and I for one am excited to see what the future may bring!