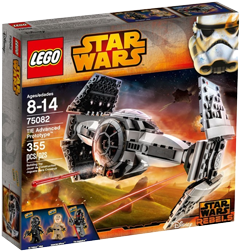 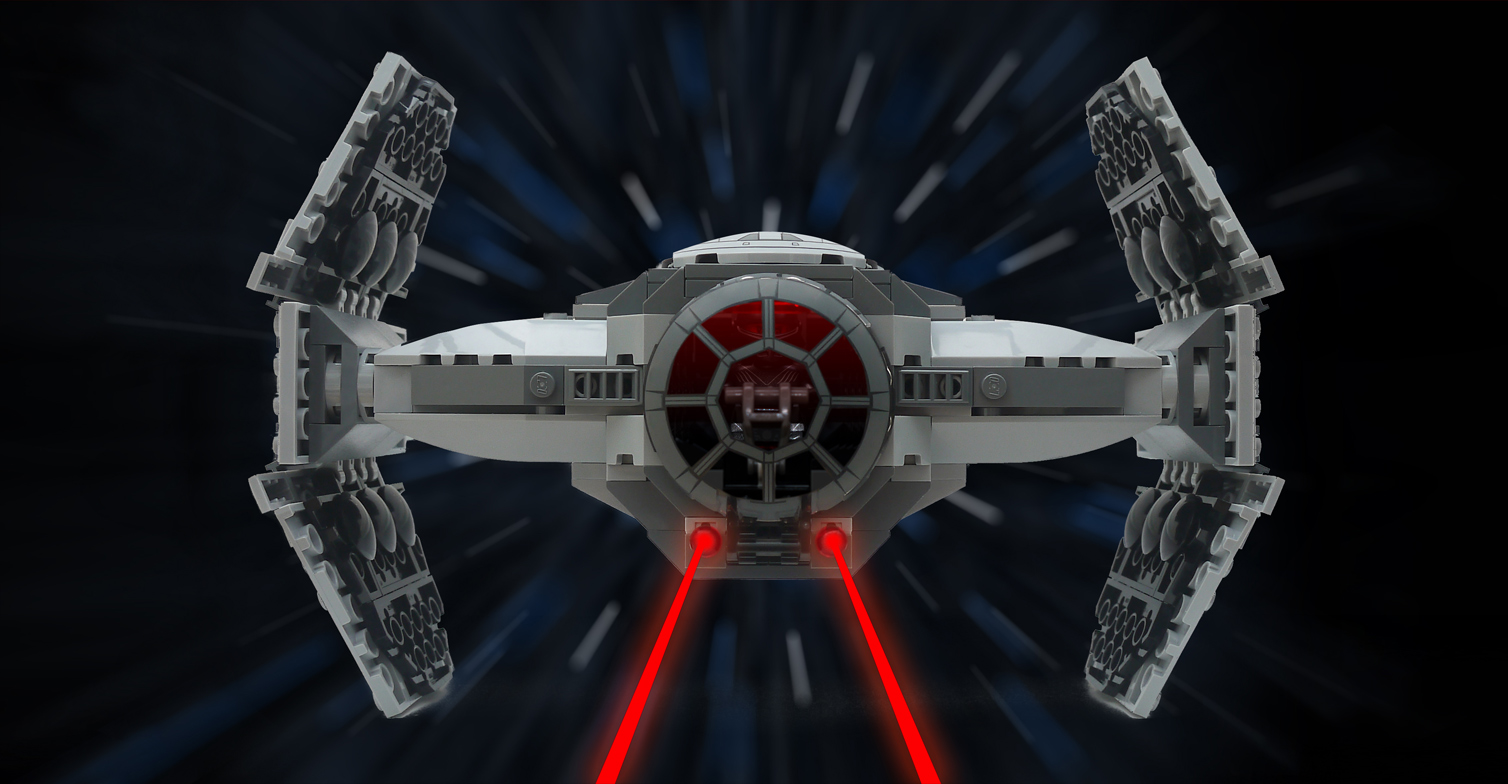 
In terms of new parts, these are concentrated in the minifigures and some TIE-specific parts, notably the two new hatches (Design ID 19229 | Element ID  6097348 and 19233 | 6097357) which incorporate handles for the first time. These are a great, streamlined shape and are nicely printed but I’d love to see a plain grey version for building with. 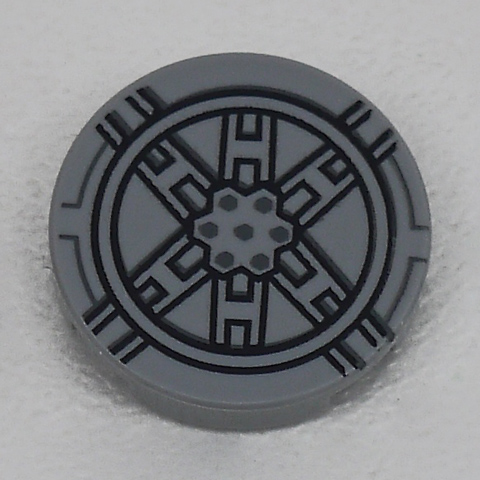 
The set only really needs a single minifigure but comes with three. You may have expected a TIE pilot, and an Imperial officer isn’t really a surprise, but nobody expected The Inquisitor! Monty Python jokes aside, he’s the standout figure. The legs and torso printing is crisp and subtle, but his shoulder armour and helmet (moulded with a trans-red visor) are stunning. The armour fits snugly around the Inquisitor’s head, hiding his neck from view, and both elements are printed beautifully. 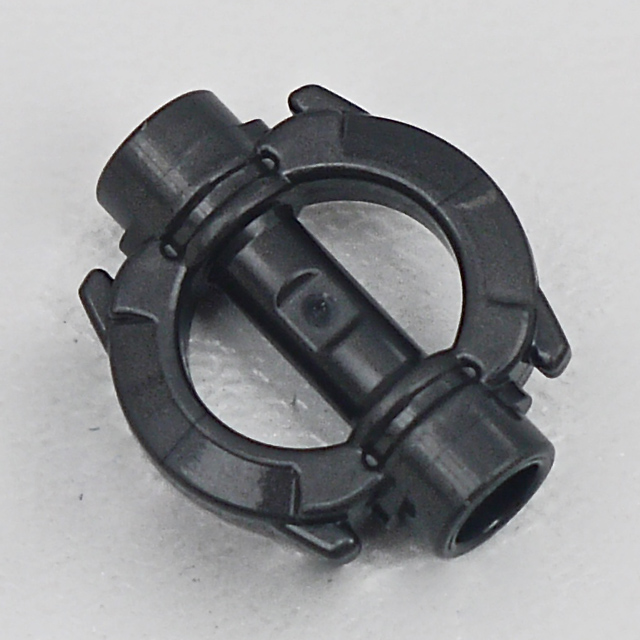 The Inquisitor also carries a cool weapon - a double-bladed lightsaber with a new curved hand guard (18673 | 6091582) in dark grey. In reference shots, this guard only has one curve but the LEGO® element contains a double curve. This makes it slightly harder to position in his hand, but looks excellent either wielded or stowed on his back (though let’s hope he never has to get through narrow doorways, or the redecorating bill will be huge).

The other two minifigs are not as notable but both are new. The TIE pilot’s helmet and torso are (like the printed tile above) a subtly different print from the four or five other similar helmets/torsos in production. The officer is more unusual, as he is in Sand Yellow [TLG]/Dark Tan [BL] instead of the more familiar grey uniform. His cap is also fairly rare in design, occurring only one other time (in dark grey) for an officer on 2014’s Imperial Star Destroyer set. 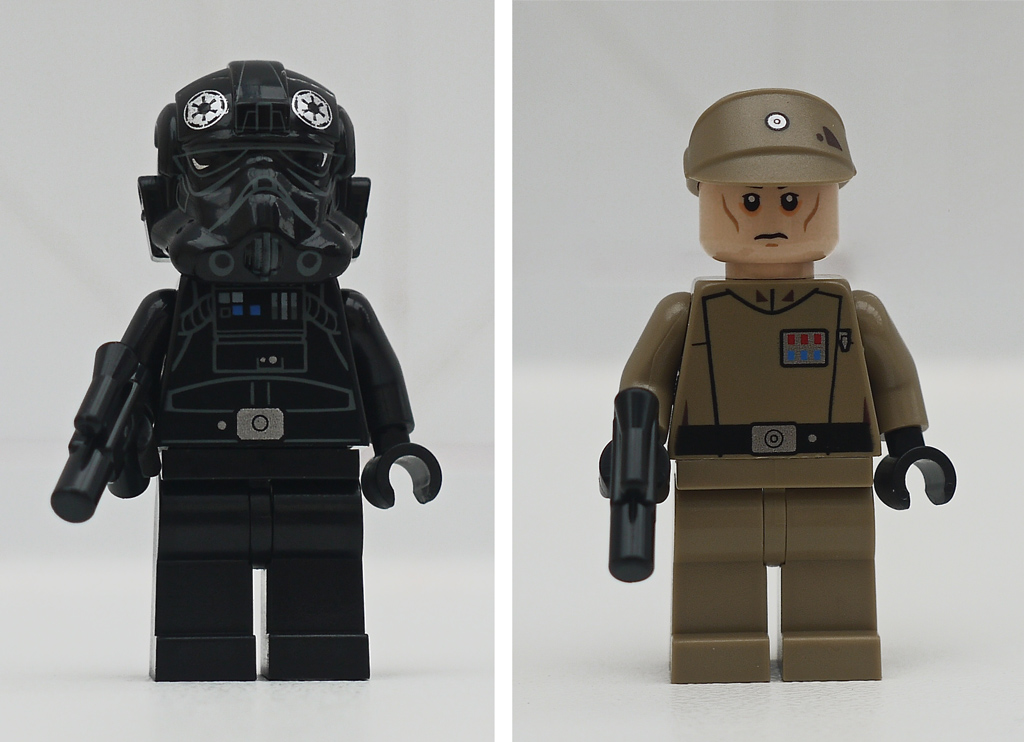 
The TIE advanced prototype is, in TIE terms, pretty cool, and notable for having curved instead of flat or angled wing panels. It seems to be the prototype for the eventual chunkier angled-wing fighter piloted by Darth Vader in Episode IV’s famous trench run scene. The wings fold against their stanchions for more compact in-hangar storage.

In build terms, this set is pretty straightforward. Bag One contains the base of the body and one stanchion; by the end of Bag Two, the entire central section is complete, and Bag Three contains the wings. As with all the recent sets I’ve built, I’m impressed with many of the building techniques which form a sturdy and nicely-shaped ship, something that can be tricky with TIE fighters owing to their somewhat odd geometry. 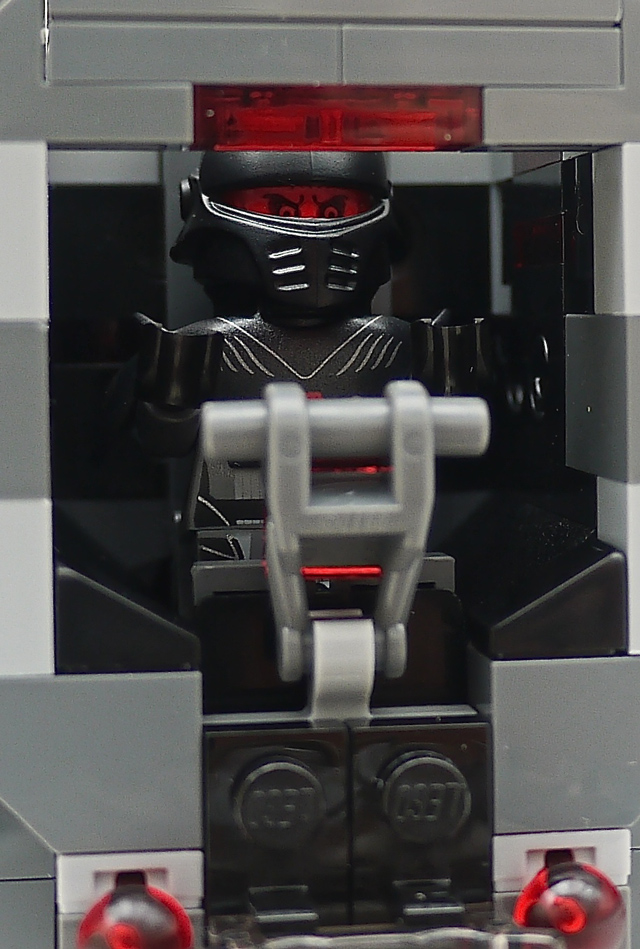 The final starfighter is impressive (with the wings out), and sports a more muscular shape than a typical TIE fighter – much more so than the reference shots, which show a spherical body and slender supports. This is a more obvious bridge between a regular TIE fighter and Vader’s ship. The pilot’s seat is nicely done; TIE fighters are notoriously cramped, but there’s plenty of room for some nice detail though a printed tile would have been a nice addition. Those hatch pieces keep the shape nice and svelte where it needs to be.

There isn’t a huge degree of SNOT building but some nice design touches - for instance, the dark grey stripe across the front of the stanchions.

The party trick of this TIE fighter is the ubiquitous flick-fire missiles. These are the new design, which actually fits the aesthetic really nicely in this case, as the small missile heads look about right, if slightly too big. Where the designer really shone on this set is the firing mechanism. The rear contains a panel that twists to either side, launching a missile in each case. It’s a pretty unnecessary complication (the missiles could simply be fired as is usual with a flick of the finger, and for that reason its inclusion is all the more laudable.


I think it’s a shame that the standard online image of the set shows the wings in folded position. It’s certainly easier to stand this way; the ship quickly keels over if propped up in wings-open position. But it really doesn’t do justice to this great addition to the TIE fleet. The Inquisitor is an excellent minifigure and the other two will no doubt add to any collector’s range. 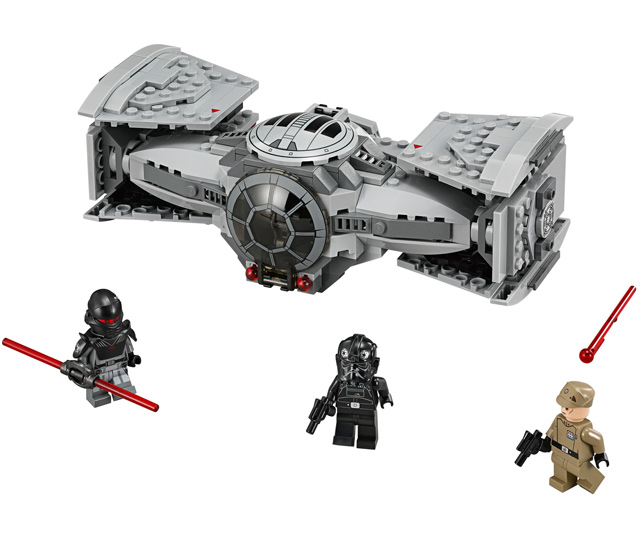 Our thanks to the LEGO Community & Events Engagement Team for providing this set.