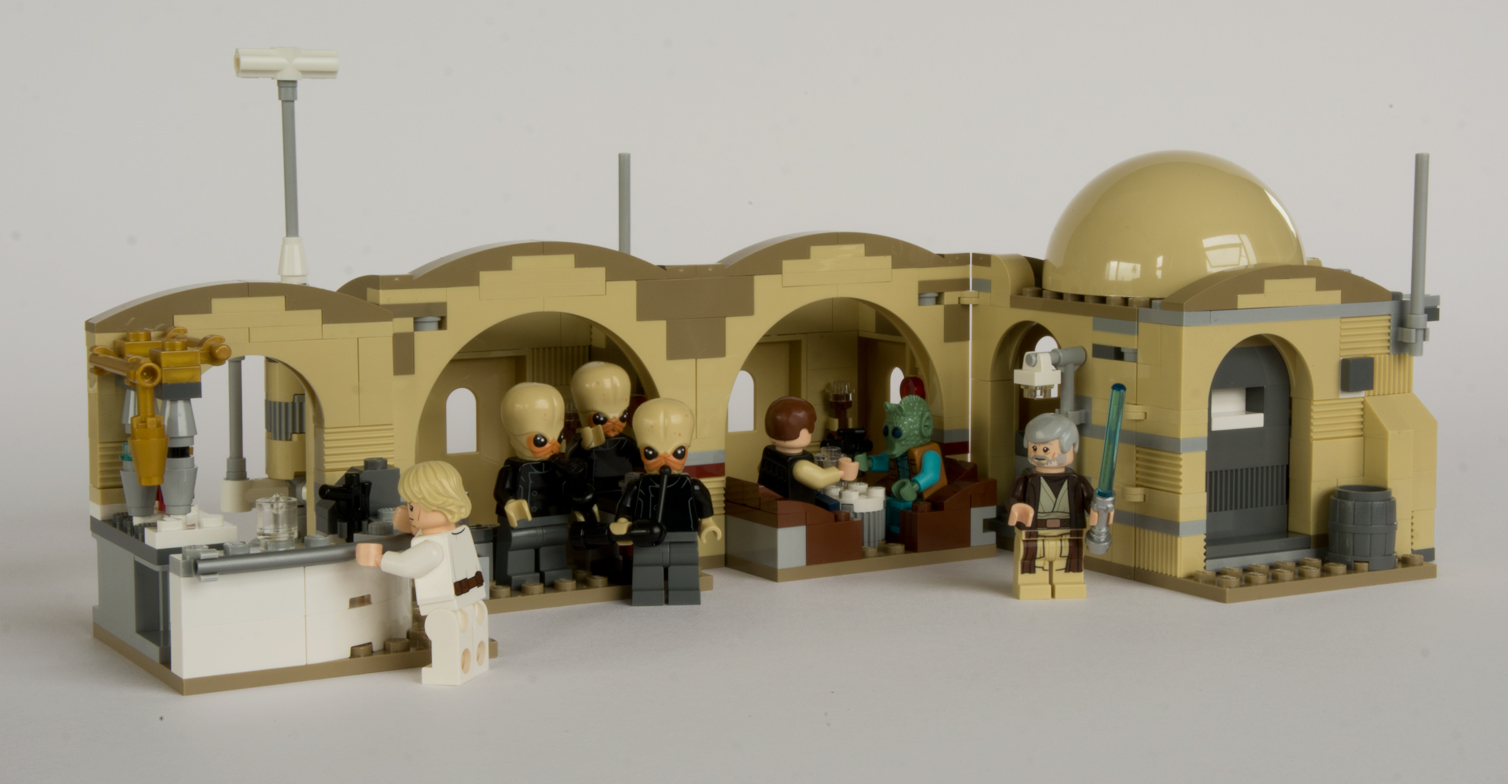 LEGO have released it as a set only once before; that was ten years ago now (set 4501) and in terms of providing the actual building it was a laughable effort – all you got was one alcove! The attraction of that set was really the Landspeeder and a Dewback and in this 2014 version the same formula has been followed; however this time we get an expanded Cantina including the much-loved band of Bith musicians. At first sight, I was disappointed as the Cantina still looked small… but as I have a lot of nostalgia for the original scene, I reserved judgment until I'd checked out what's on offer. 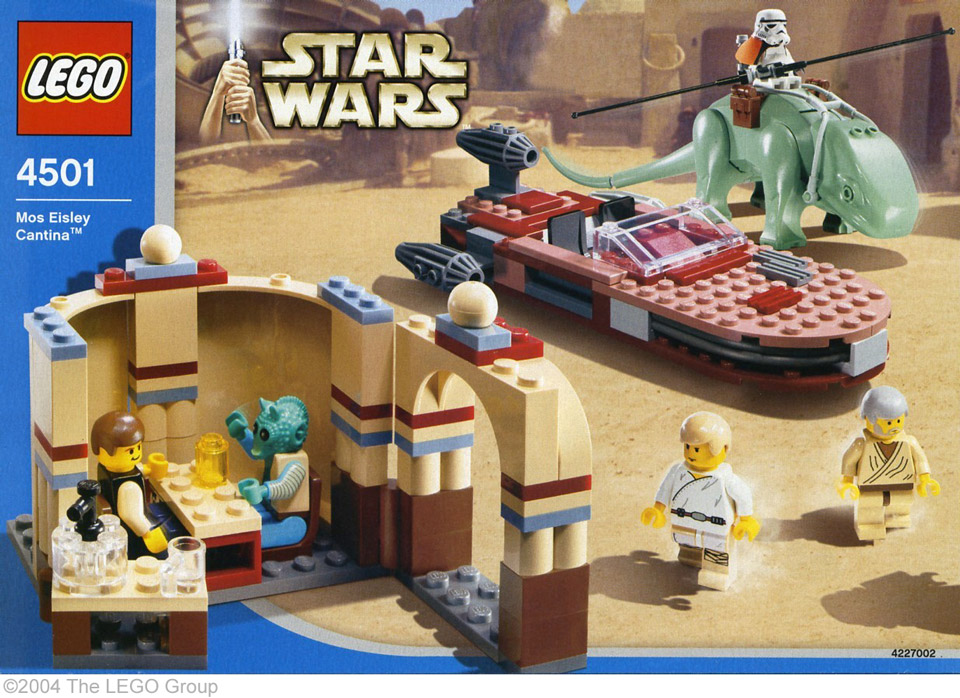 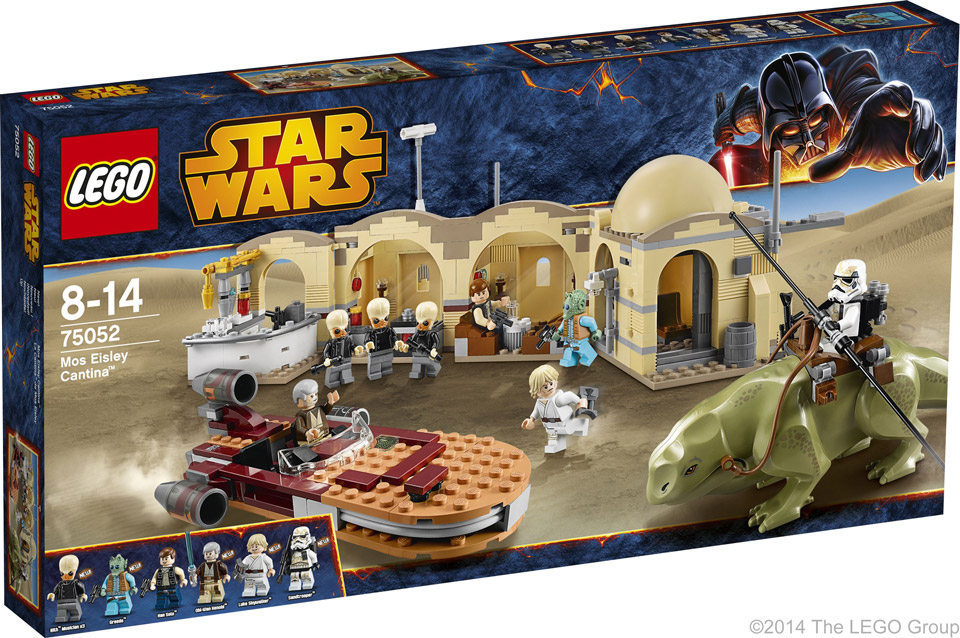 There are some completely new parts in this set which constitute a new design of the Dewback creature, in Olive Green. It’s a better representation than the 2004 version but that one was constructed of twelve parts; in this version sadly there are only two (Element ID 6079117 | Design ID 18131 and 6079125 | 18134). The only moving part is the jaw, attached via a shallow dimple, but he has a lot of character and looks very cute! There are only two positions for the jaw - open or closed - but as you can see from this quick animation, it is possible to position the jaw at other angles, however this is a very delicate balancing act. Note the small bar projecting at the rear of his mouth - there's one of these either side to attach the reins. Aside from his feet, the other point of connection is a section of 4X4 studs on his back where you can attach the saddle – having so many studs makes it a little difficult to then remove the saddle without sending pieces scattering, but once you manage that you can use the four Olive Green 1X4 'telephone' bows provided to complete him in the buff.

So, good luck re-purposing the Dewback pieces in other models! However you might find interesting uses for his reins, which are a new soft flexible part in Reddish Brown (6080359 16877). The connection points require a bar: these do not nestle in a regular hole. The part thickens out in the middle so that clips/minifig hands can be attached. If this part were gray I'm sure the Space heads would be going nuts for it, so I'm sure some of you will find a use for a brown one. I'm thinking of an interesting door frame - perhaps inspired by the way reins were used as architectural features in 10190 Market Street. 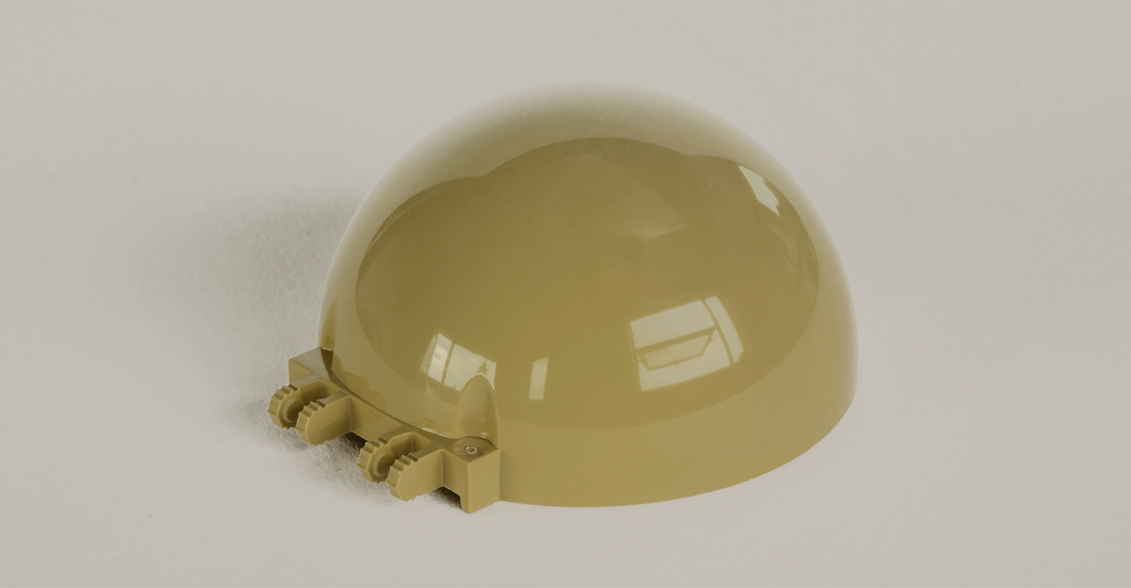 Speaking of architectural features, let's move onto a new colour of a cool part: the hinged hemispherical 8X8 dome in Brick Yellow [TLG]/Tan [BL] (6074604 95198). Previously this has only appeared as a Transparent [TLG]/Trans-Clear [TLG] canopy in a couple of UFO sets from the retro sci-fi theme Alien Conquest. I suspect this new colour will be especially welcomed by those that like to build Middle Eastern architecture, although of course the presence of the hinge is irritating in that scenario. 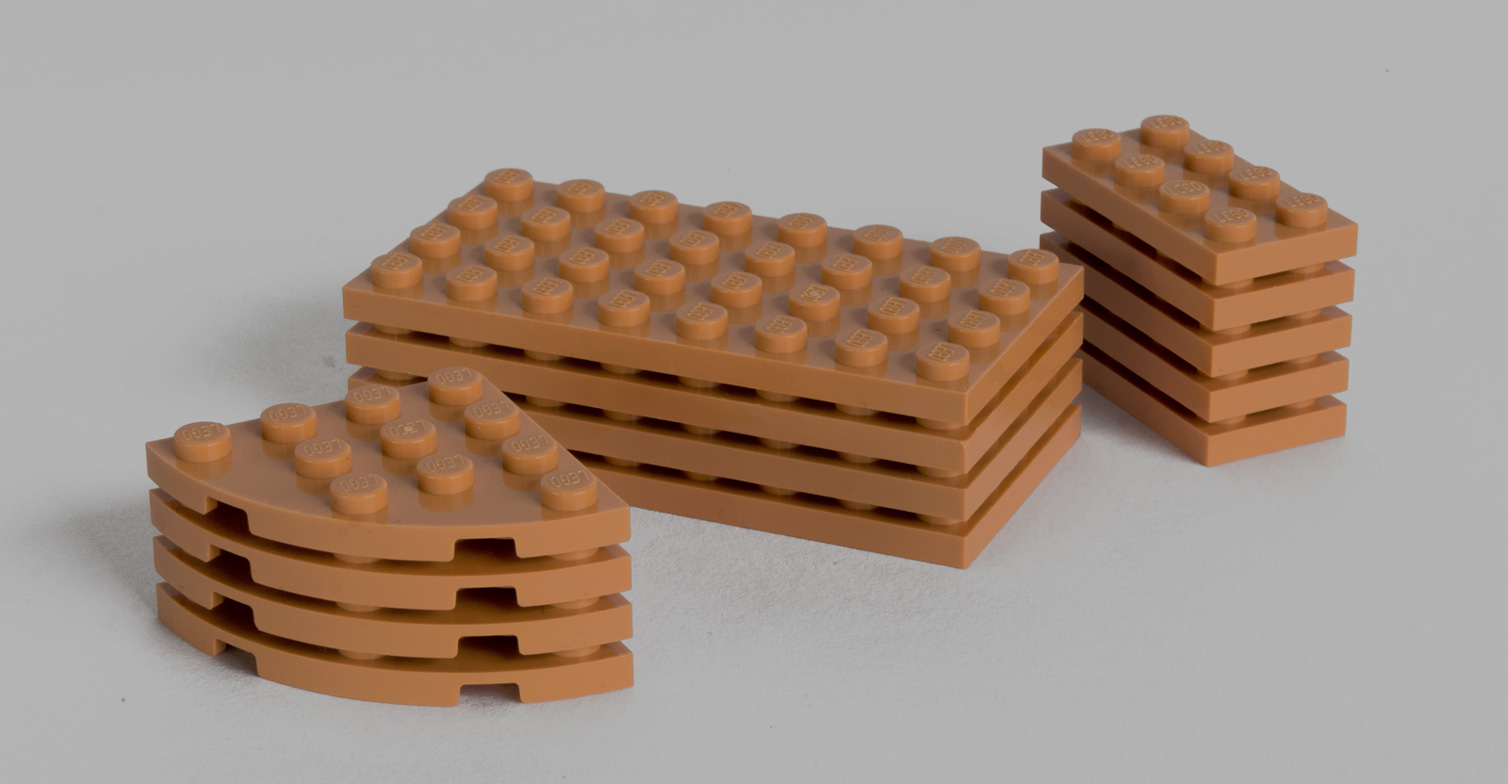 For geeks like me, the most exciting elements in this set are undoubtedly the plates in Nougat [TLG]/Flesh [TLG]. I figuratively drooled over these in a post back in July, and now that I have them in the *ahem* flesh I can literally drool over them, but I shan't. They're too lovely. Previously, this colour seemed to be reserved for figures and Duplo, but that changed with 71006 The Simpsons House

earlier this year which had doors and 6X8 plates. (Note that 6X8s now also come in 10245 Santa's Workshop 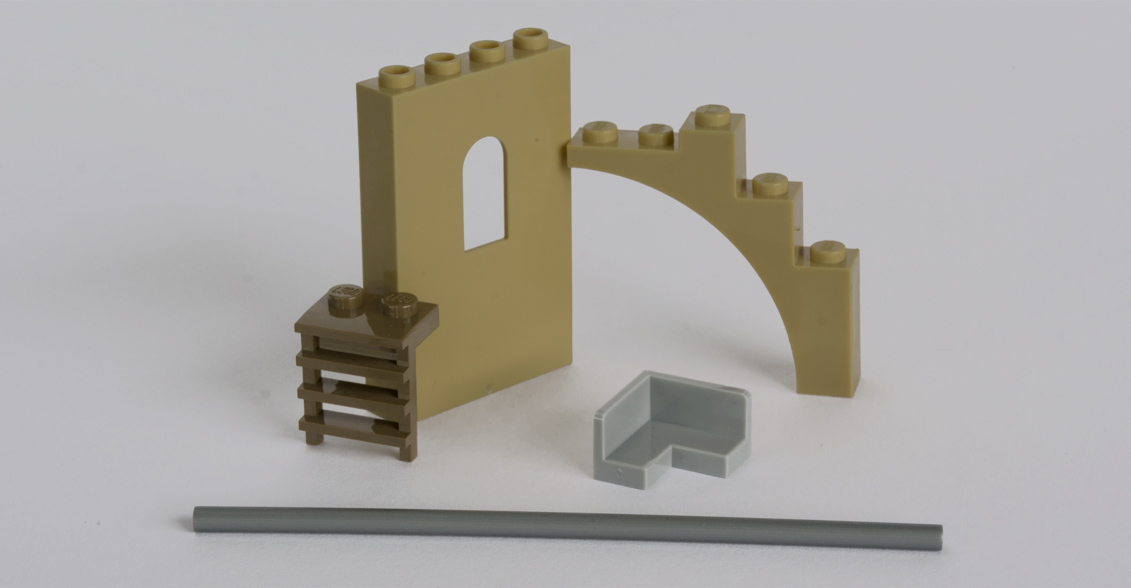 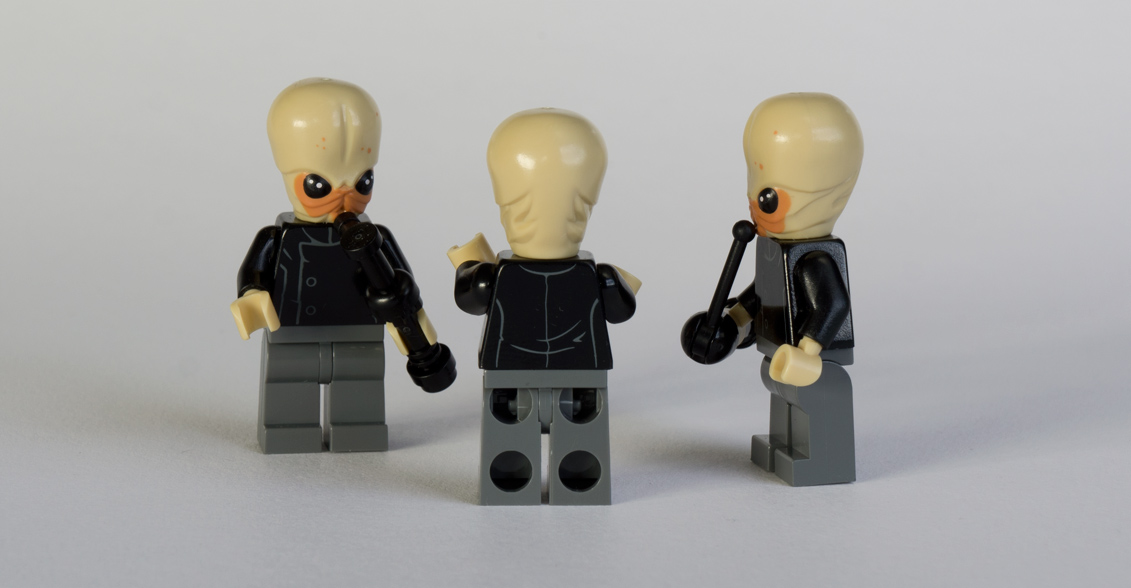 Undeniably the (eight!) minifigures are an enormous draw for this set. Luke Skywalker and Han Solo sport their new designs as seen in other 2014 sets whilst all other minifigures are unique. Most exciting of all are the three Bith, a race that LEGO have never made before. The sculpting and printing of the head piece is a superb job that captures them perfectly. Unusually for Star Wars figs, their torsos are something you might conceivably use in other minifigures. 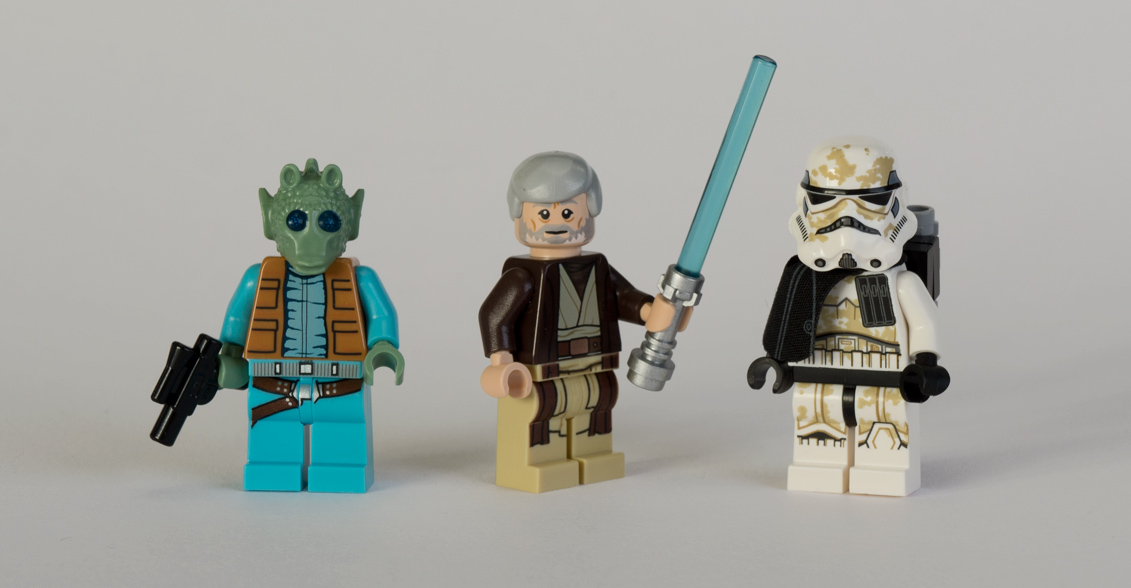 Greedo’s head is the same shape as 2004 but with detailed new printing, and whilst I prefer his new torso and legs, the lovely striped arm printing from the 2004 version is not included here. Obi Wan has a new design with his cloak printed onto the torso and legs, rather than a separate cape piece, which I personally prefer. Poor chap, his face is looking especially haggard. The Sandtrooper has been redesigned too, with sand stains that feel more realistic – less splodgy. 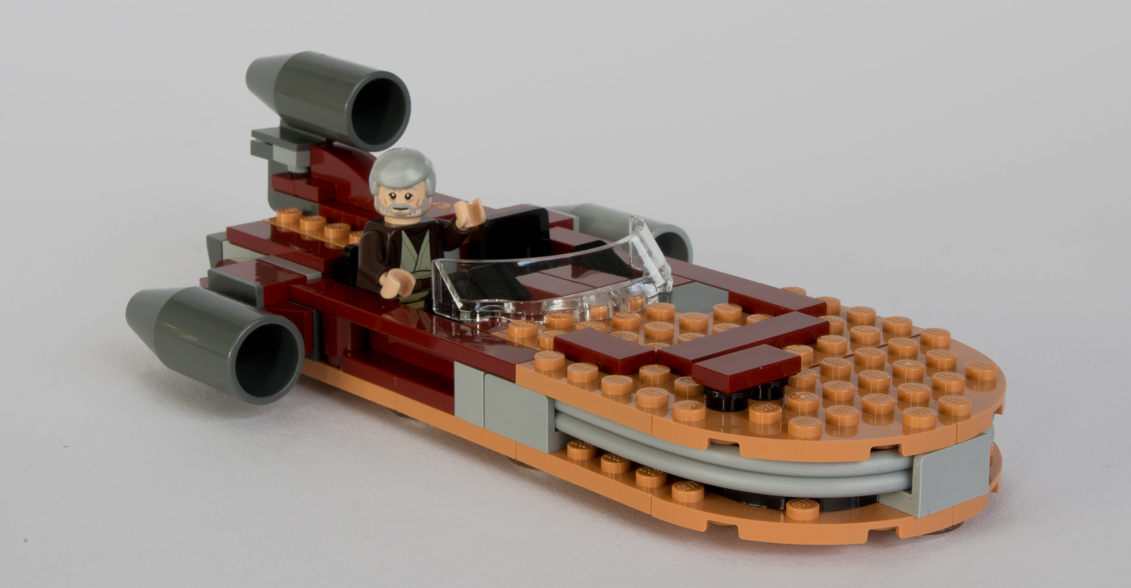 Bag 1 contains the Landspeeder; the design of which is nearly identical to 8092 Luke's Landspeeder which LEGO released in 2010, but this one is far superior as this is where the aforementioned Nougat plates are employed. To be honest I think I prefer the Sand Red used in 2004 – unfortunately this is one of the colours that LEGO stopped making in the great colour cull in the mid-2000s. The other aspect that makes this latest Landspeeder look better are the stickers that go on the three engine pieces, but I couldn't bear to apply them - so here's an official pic to show you. In fact all of the stickers in this set are cool and useful for control panels, so I did apply some of the ones that went on slopes. 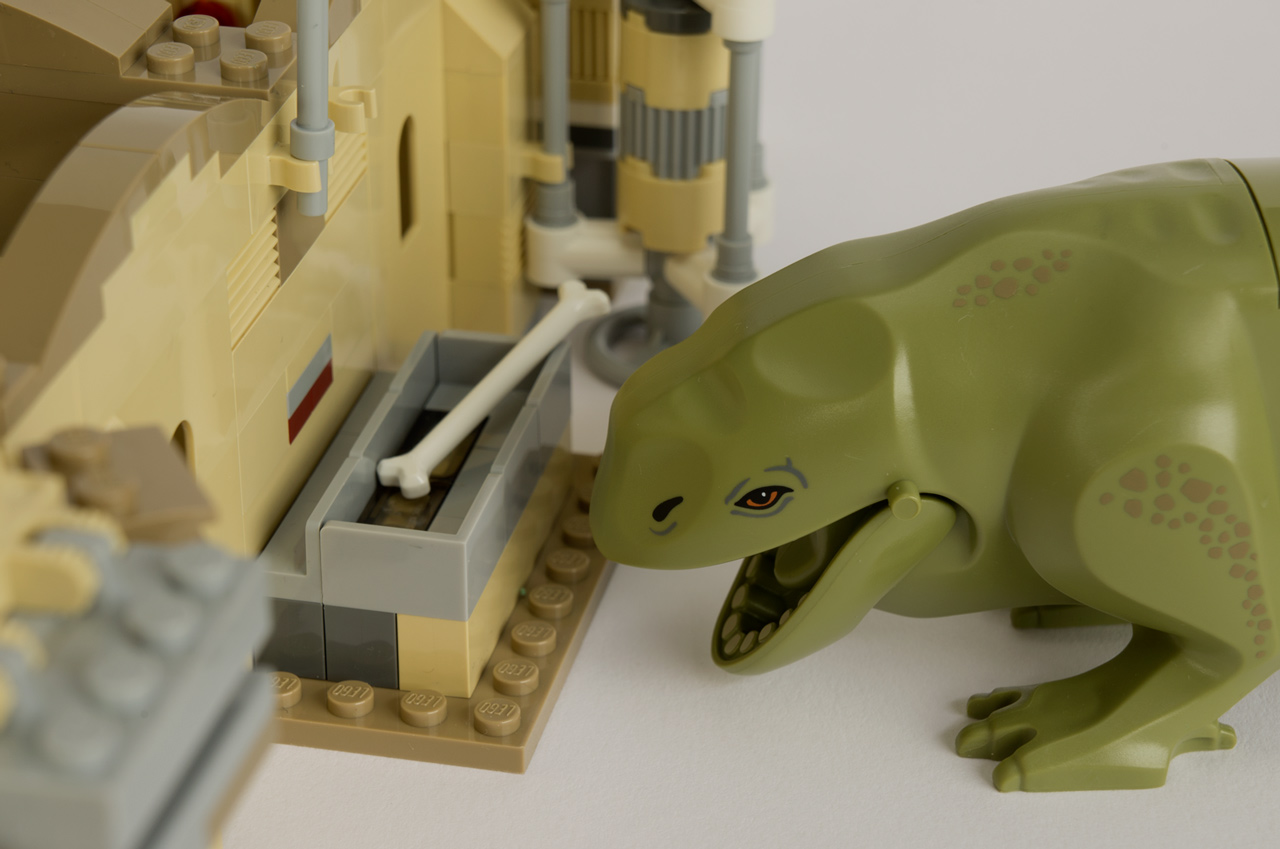 Constructing the building is broken up to avoid becoming too repetitive, and Bag 2 contains the first section consisting of two alcoves which get filled in Bag 3. One alcove contains Han and Greedo of course, and the other the Bith band. Rather neatly, these alcove interiors slide outwards on rails - a cute little play feature that makes it easier to place your minifigures. On the reverse side of the wall, there is a little feeding area for the Dewback! Cute. There’s also a triangular piece of tech that is quite fun to make, and probably counts as the most unusual build technique included (but that's not saying much; this is a fairly simple set). 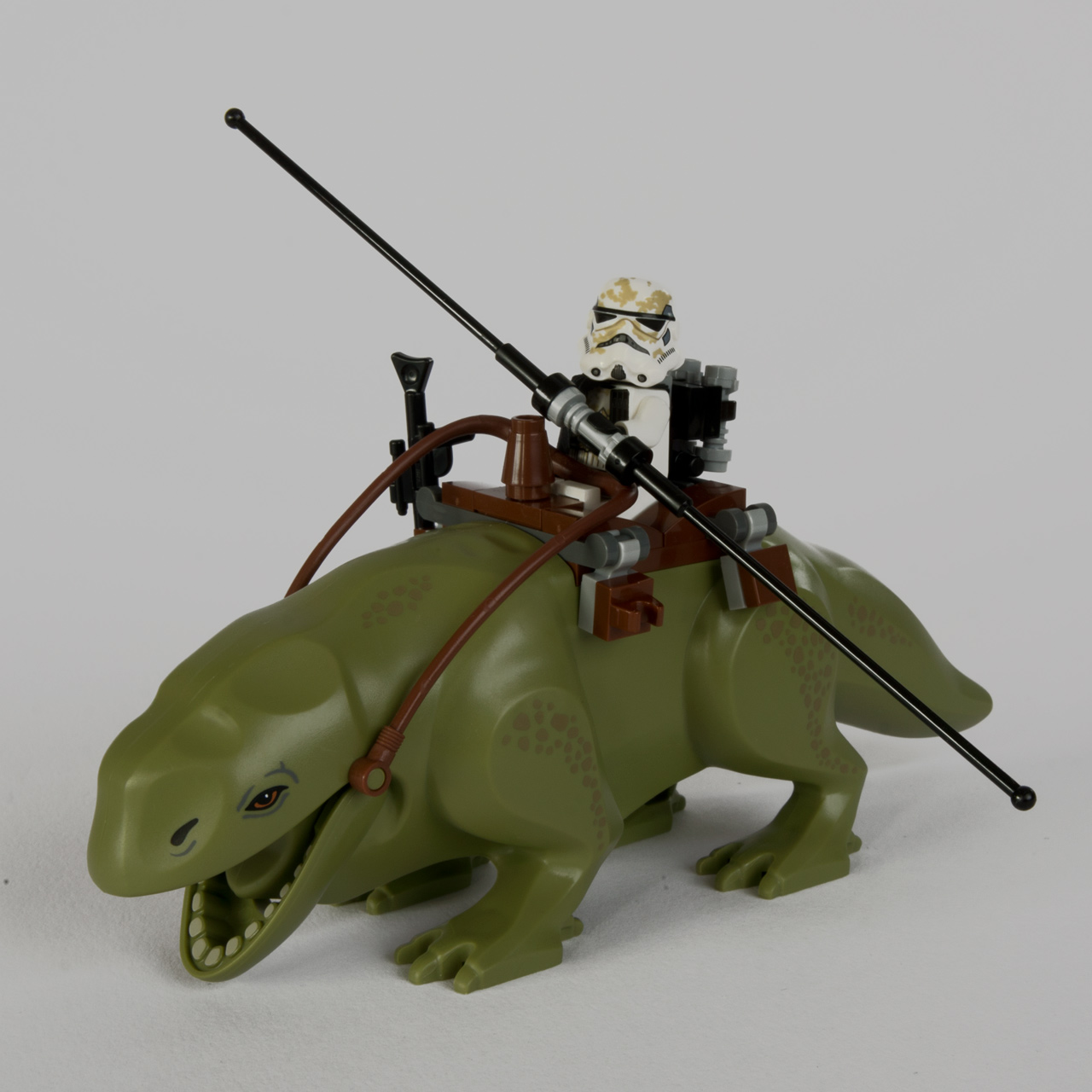 In Bag 4 the Dewback appears and you create its saddle, which is quite detailed for something so small and consequently looks great. You also build the segment of the bar, which has nice details like the weird pipework and the handrail made from the Silver Metallic tubing. The bar is awfully small compared to the original film and the lack of a bartender feels odd. Bag 5 contains the final segment of the Cantina; an entrance covered with the Tan dome. The entrance has a sliding door which I don’t recall from the film, but will be fun for play scenarios.

Once complete you can appreciate how much fun it is to rearrange the Cantina: there are three hinge points in its structure which permits a surprising number of arrangements. Careful attention to detail has obviously been applied during design as, regardless of how you arrange it, everything folds together neatly. I'm sure kids will love this play function - back in 1979 I certainly loved my sister's multi-hinged 375 Castle; this is pretty much the same trick!


When fully closed it looks like a smaller-scale representation of a building on Mos Eisley, which is pretty cool. The domes, arches and haphazard structure capture the aesthetic well. 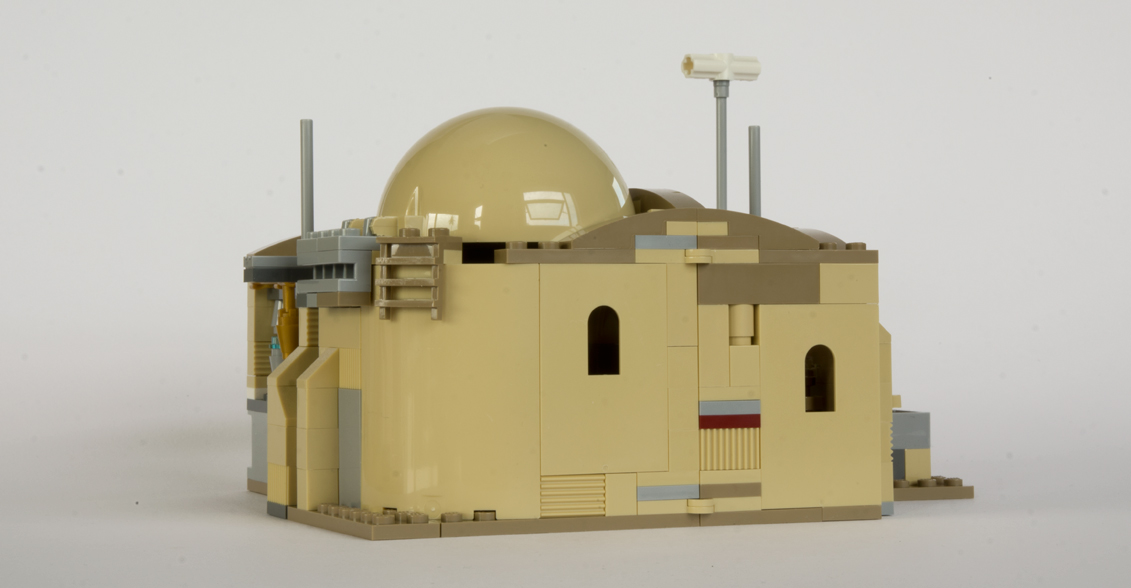 Given what an iconic location this is from the original film, a new LEGO version is highly welcome and obviously it’s a vast improvement on the size of the 2004 version. The proliferation of hinges and rails makes the Cantina a lot of fun to arrange and play with, and overall this is more a playset than a display set. The hefty price tag has no doubt been inflated in part by the development and production of the Dewback, but you get a lot of different models for the price, and superb minifigures which will surely excite your visiting SW friends! But if you’re not bothered about the minifigs and Dewback, this set is not worth the price. Aside from the Nougat plates, I wouldn’t buy it for parts unless you like curved Tan/Dark Tan pieces. 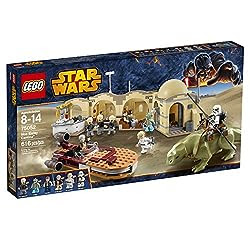 Although it’s great fun, this set left me wanting more: more Cantina, more of the bar area and more minifigures populating the scene. That's good really, because this is LEGO and all I have to do is build more! Personally, I'd have preferred it if LEGO had ditched the Landspeeder and Dewback this time around and focused solely on the bar and its occupants, but I can understand why they didn't. The vehicle and creature provide a lot more 'play scenarios' than just having a bar would, and frankly the eight figures supplied are a hell of a lot already.


They've done a great job of making the bar accurate and an interesting model to play with, so whilst this set is no Ultimate Collectors Series Cantina, it could be a head start towards creating your own… hey, if you bought two copies you could design a nicely-sized Cantina with a full turnout of the Modal Nodes!