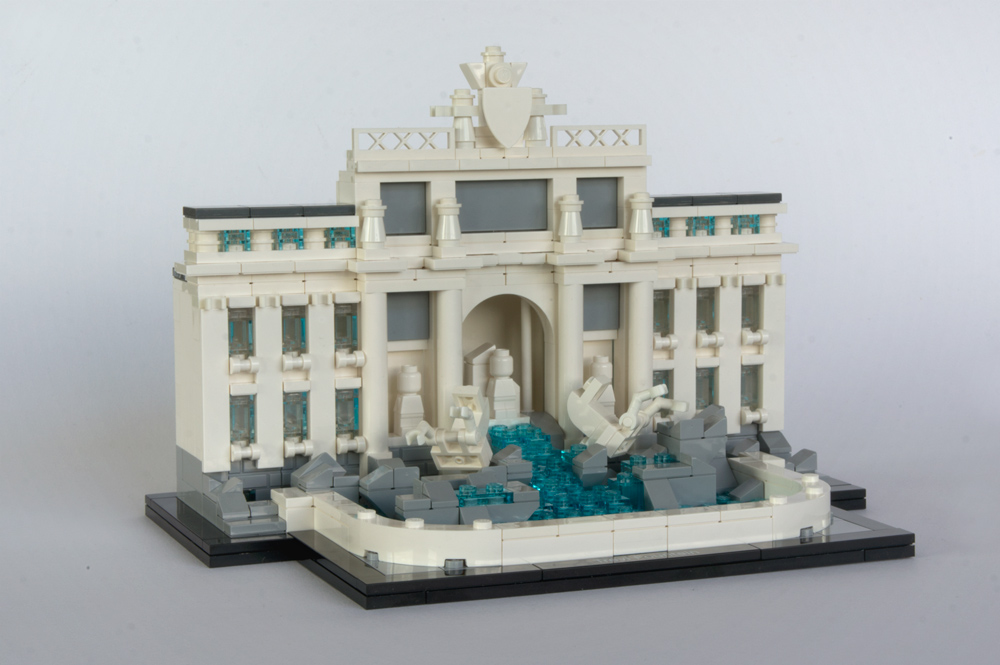 It's been known about for some time now, but the newest set in the 2014 Architecture line has been officially announced today; 21020 Trevi Fountain. More accurately, the set is the Trevi Fountain plus the façade of the Palazzo Poli, the palace that sits behind it. LEGO®'s Community and Events Engagement Team kindly organised an advance review copy for New Elementary but before you ask; I don't yet know the release date or price. [Edit: now listed on UK LEGO site at £39.99; same as 21006 The White House.]

The subject is a bit of a winner really; the 252-year-old Trevi Fountain is certainly Rome's most famous fountain and I'm struggling to think of one more famous anywhere. It's romantic, being in the Baroque style, and it's huge - almost 50 metres wide - and the tiny square it's packed into makes it feel even more colossal. I have visited it but that was over 20 years ago, so my dominant memory of it is really the famous scene from Fellini's 1960 classic "La Dolce Vita" when Anita Ekberg decides to spoil her nice frock. 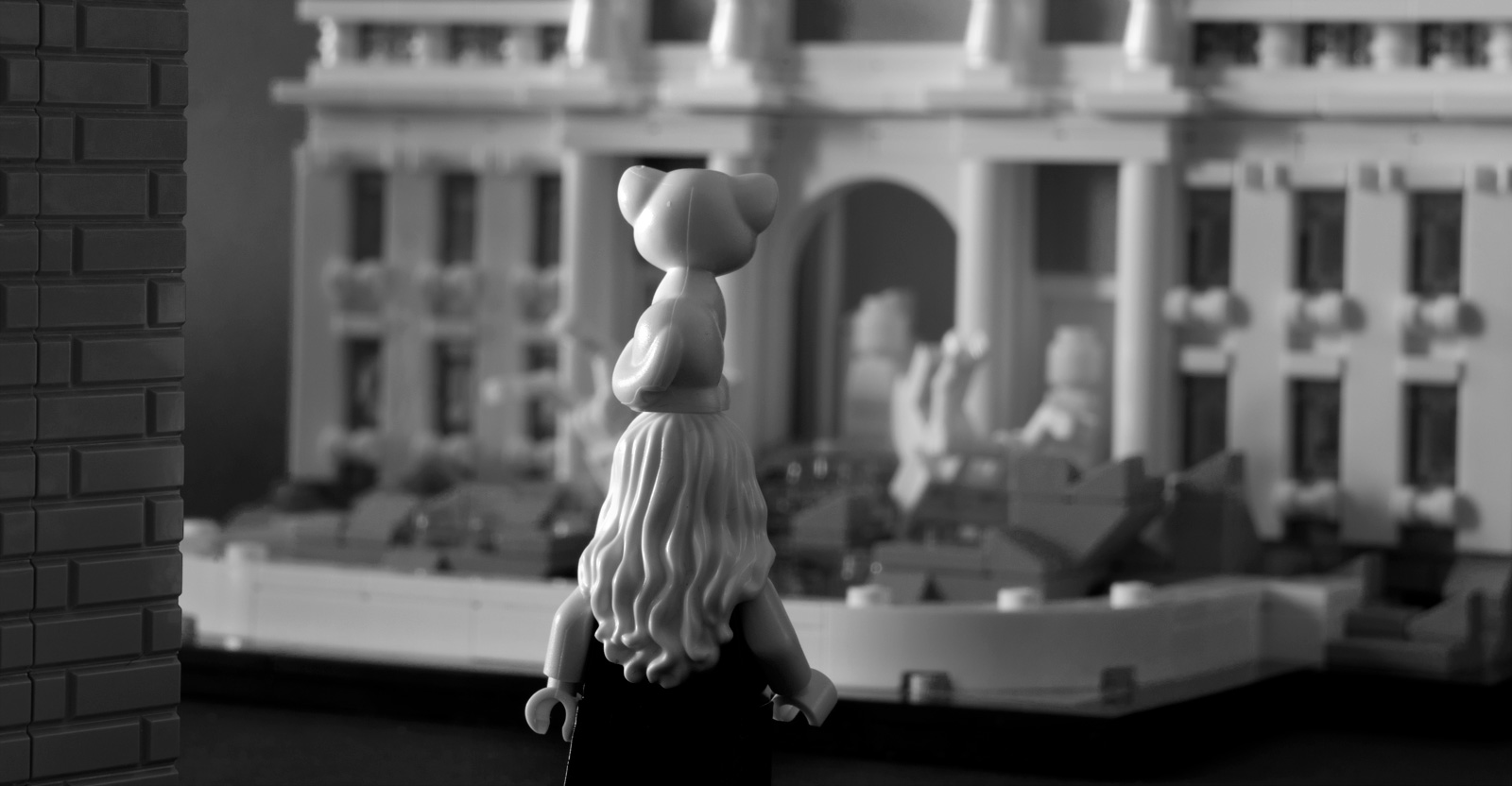 The set design is, once again, by Rok Kobe. He seems to be doing pretty much all the Architecture sets these days, and there's no complaint from me about that - I enjoy every one. He has a sound understanding of the particular skills needed for representing real-world structures in microscale and uses a range of technques in the builds that are appropriate to requirements. 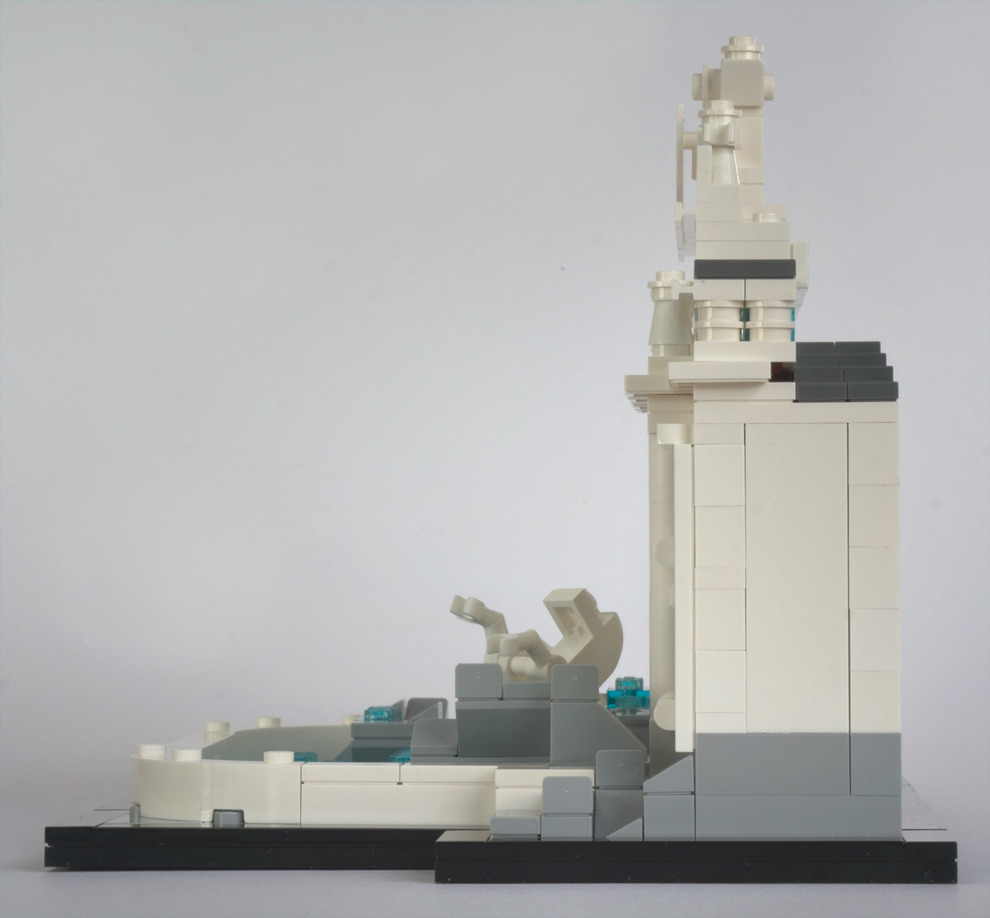 I suspect many folk think of all Architecture sets as being pretty much the same type of model and build experience, but I always find each has its own prevailing aspects. Unusually, 21020 Trevi Fountain is L‑shaped; essentially a horizontal plane and a vertical plane. Initially this did make me fear that I wouldn't enjoy this set so much. But what sets it apart is the massive amount of detail packed in, particularly in the façade.

As usual, the instruction booklet is satisfyingly thick at 144 pages and full of interesting tidbits of information. It's large too - approximately 18x20cm. I counted 743 parts (including spares and brick separator) which is pretty big, placing it below 21005 Fallingwater

. However it's smaller than both those sets, with the parts weighing in at 445g - virtually the same as 21006 The White House

. Obviously this means it has a greater number of small pieces in it, which is apparent from just looking at the pictures - this set has a lot of impressive detailing, and a lot of small transparent plates! 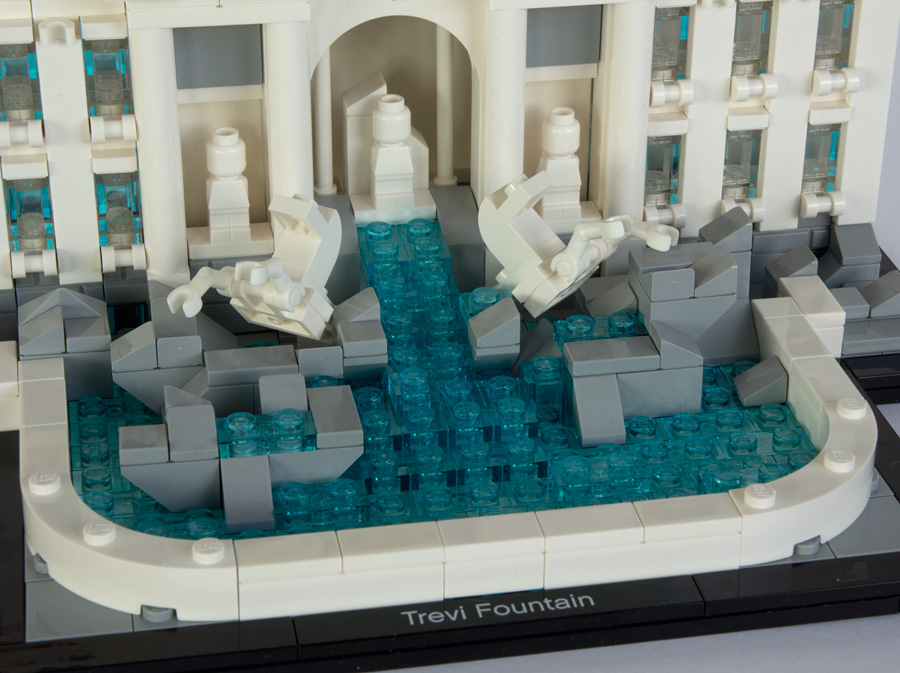 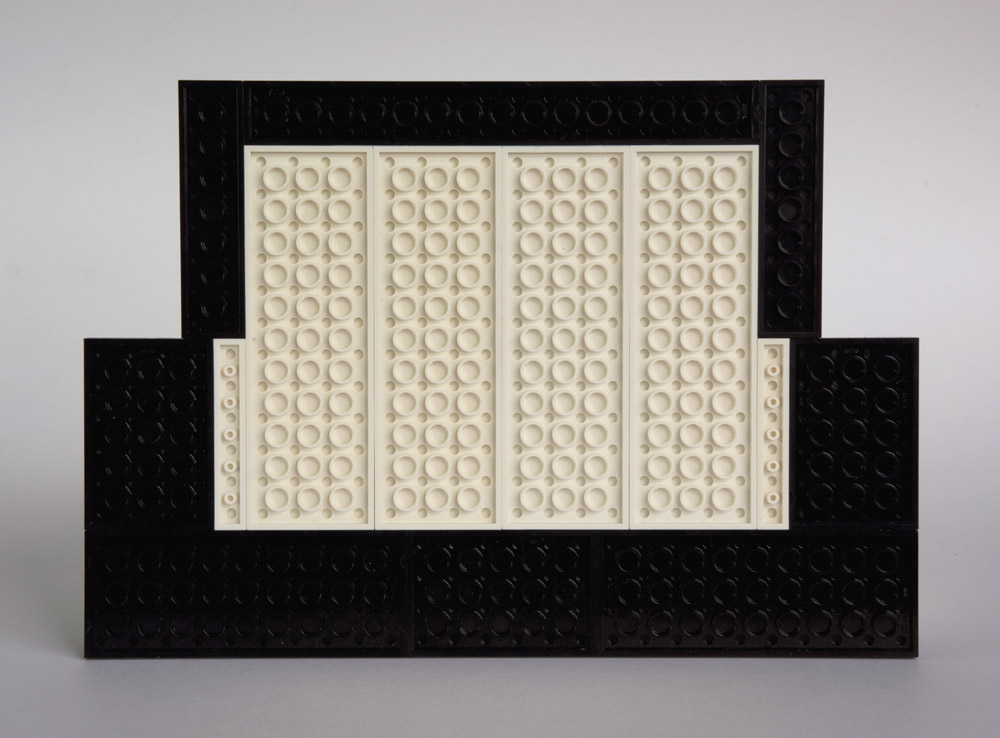 Unusually the base is not rectangular, which serves to highlight the different volumes of the fountain and façade. It's also made of two colours; the edges are the usual Black but the centre is White, because the Trans-Light Blue [BL]/ Tr.L.Blue [TLG] water in the fountain is placed directly onto the base layer. This makes construction awkward if, like me, you prefer to build in your hands rather than on a flat surface as the instructions recommend. I soon relented and moved from the comfy chair to the table.

It's fairly easy to position parts incorrectly when making the fountain, which is actually refreshing in these modern days of LEGO instructions and builds being too easy to get wrong. In many steps, the instruction makers employ the ancient tradition of placing an outline around new parts that are being added.

Haters of repetitive steps may find some cause to moan. I usually enjoy them, so the four steps where you position 69 Trans-Light Blue 1X2 plates in the fountain were just fine. But the palazzo façade largely consists of various types of 1X1 bricks, plates and tiles, and it does push my obsessive-compulsive buttons when you need to align a lot of 1X1 parts and I have to stop myself needing to get it juuuuust right. But hey, fine detailing like this ain't gonna come easy. 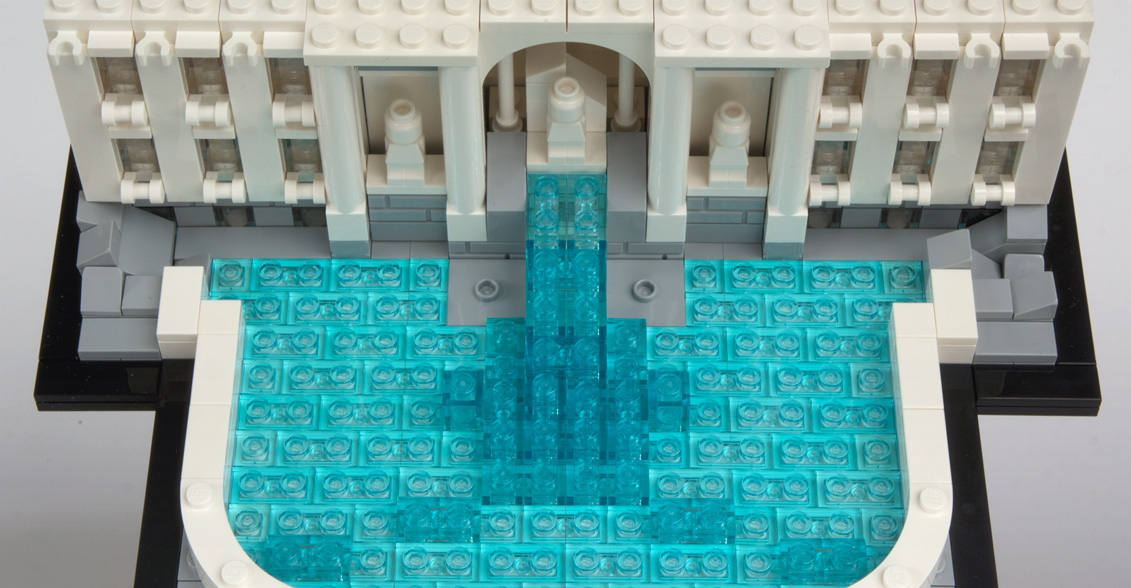 In fact, the detailing on the palazzo façade was the highlight of the build for me. Various modified plates - clips, handles and jumper plates - are cleverly used to provide gentle textures representing some of the Classical features on the walls, along with a little SNOT for the flat columns. The cornice is achieved by staggering 2X2 jumper plates, which results in some delightfully fiddly arrangements as you see in this picture of the roof nearing completion.

Achieving details like these is important and a key aspect to the build; indeed Kobe uses most of his page of blurb at the end of the booklet to discuss it (and I won't spoil his interesting insights here). But representing detail never gets in the way of keeping the proportions of the building in check, which I think is the true mark of a great microscale rendition. For example it would have been nice if he'd found a way to represent the Corinthian capitals on the four large central columns, but I can see this would have impacted the lovely cornices.

The other area Kobe has handled delicately are the statues. The main three are represented with microfigs, those mini-minifigs from the now-defunct Games line, and smaller statues are rendered with basic parts that achieve their form without detracting from the main statues. However the real highlight of the statues are the hippocampi (freakin' horse-mermaid monsters!) emerging from the water. Sadly we can't see their fishy halves, but their horsey halves are excellent, using just six parts each to create an unmistakable shape full of dynamism. 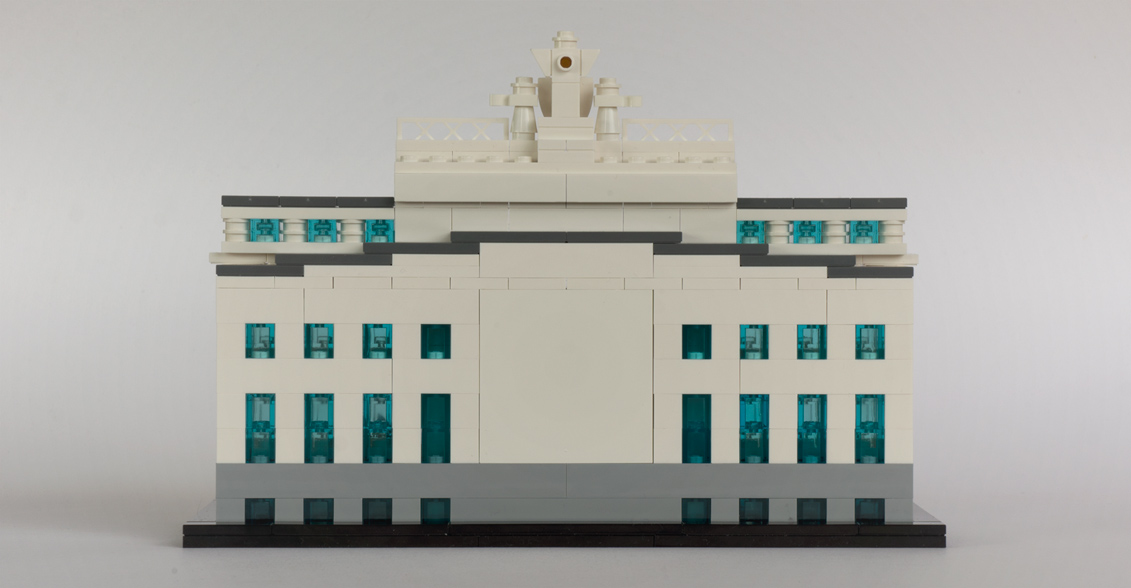 From glancing at pictures, you might think that the windows at the front of the palazzo are Trans-Light Blue, but in fact they're Trans-Clear [BL]/ Transparent [TLG]. It's the second set of windows at the rear of the model (shown here) that are Trans-Light Blue, creating an ethereal glow that imbues the front windows with a lighter shade of blue than the water in the fountain - suggesting perhaps that the windows are reflecting the water? Also, Kobe keeps the building hollow, resulting in the soft reflected blue light also creeping into the central niche - a magnificent bit of architectural sleight-of-hand. 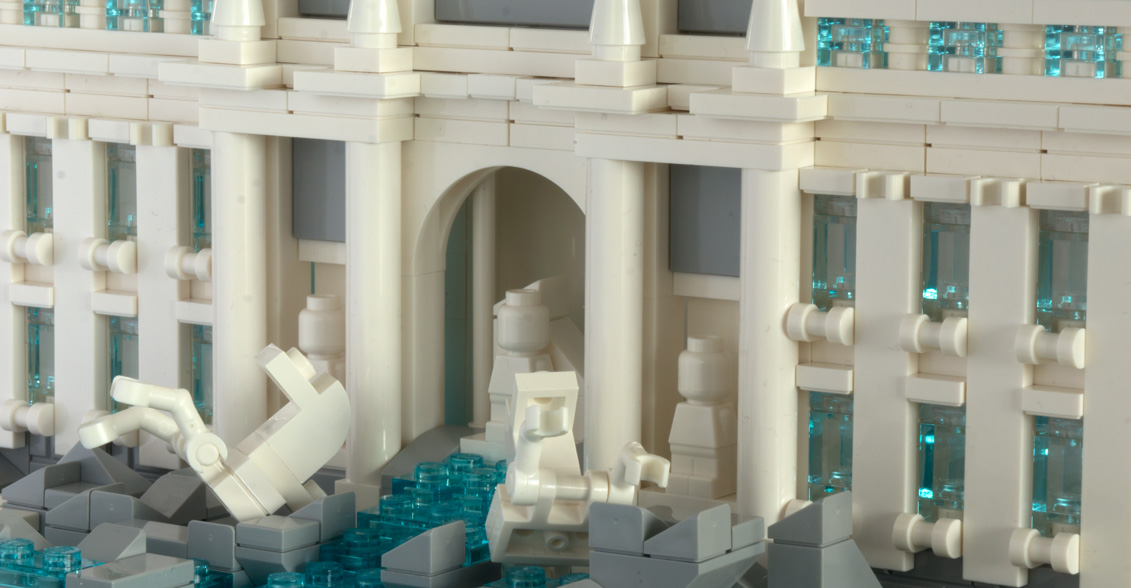 In terms of parts in new colours there are two fairly unusual ones in White: the classic shield (Element ID 6073416 | Design ID 3846) and the aforementioned three microfigs (Element ID 4552453 | Design ID 85863) which both come without printing. As ever, you get the printed 1X8 tile with the name of the set (Element ID 6082195 | Design ID 4162) which sadly comes only in English - often a second is printed in the native language in these sets. The copy on the box and in the booklet is in both languages, so it seems a little sad there's no second tile, but I can only assume this was a cost decision. 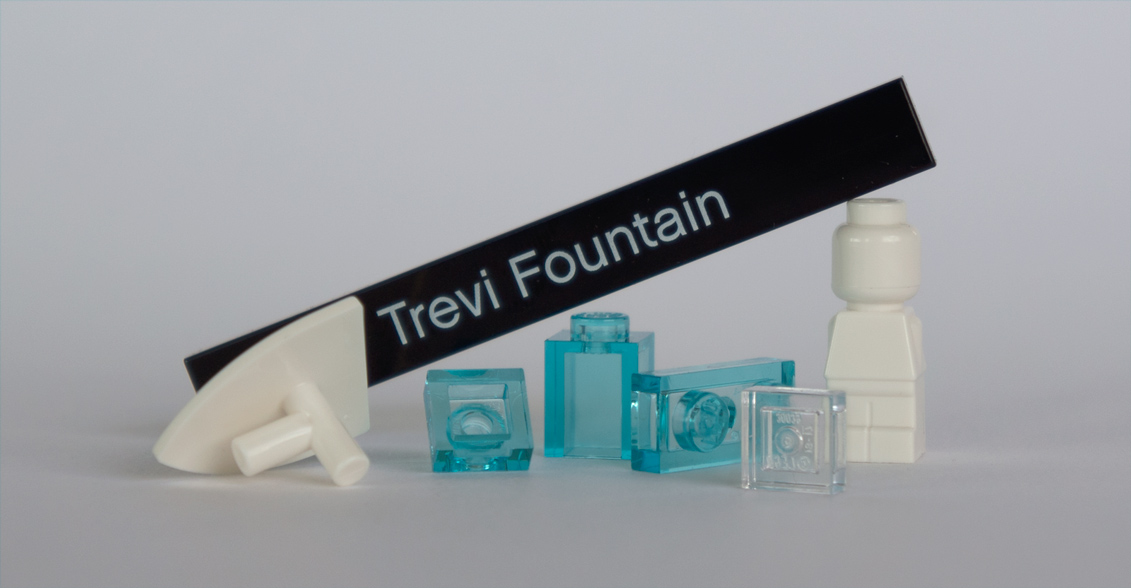 The transparent parts aren't new, but I'm sure many of you don't have them yet or would be happy to own more! The 1X1 tile in Trans-Clear (Element ID 6047501 | Design ID 30039) has so far only appeared in two limited release sets: 4000010 LEGO House and this year's Inside Tour set (which of course I will not reveal the name of here). There are three plus a spare in Trevi Fountain. Trans-Light Blue plates have been in a lot of recent Architecture sets in high quantities, and in this set you get 28 1X1s and 97 1X2s plus spares. There's also 34 1X1 bricks (Element ID 6052994 | Design ID 30071) - this element has been absent for a decade but is now back in sets and can also be found in 10244 Fairground Mixer

This set definitely exceeded my expectations, since Baroque and Classical architecture are so difficult to represent in LEGO, let alone microscale. Yet this is a superb job. Earlier I simplistically described the model as a horizontal and a vertical plane, but in fact these planes are packed with fine detail and layered texture. 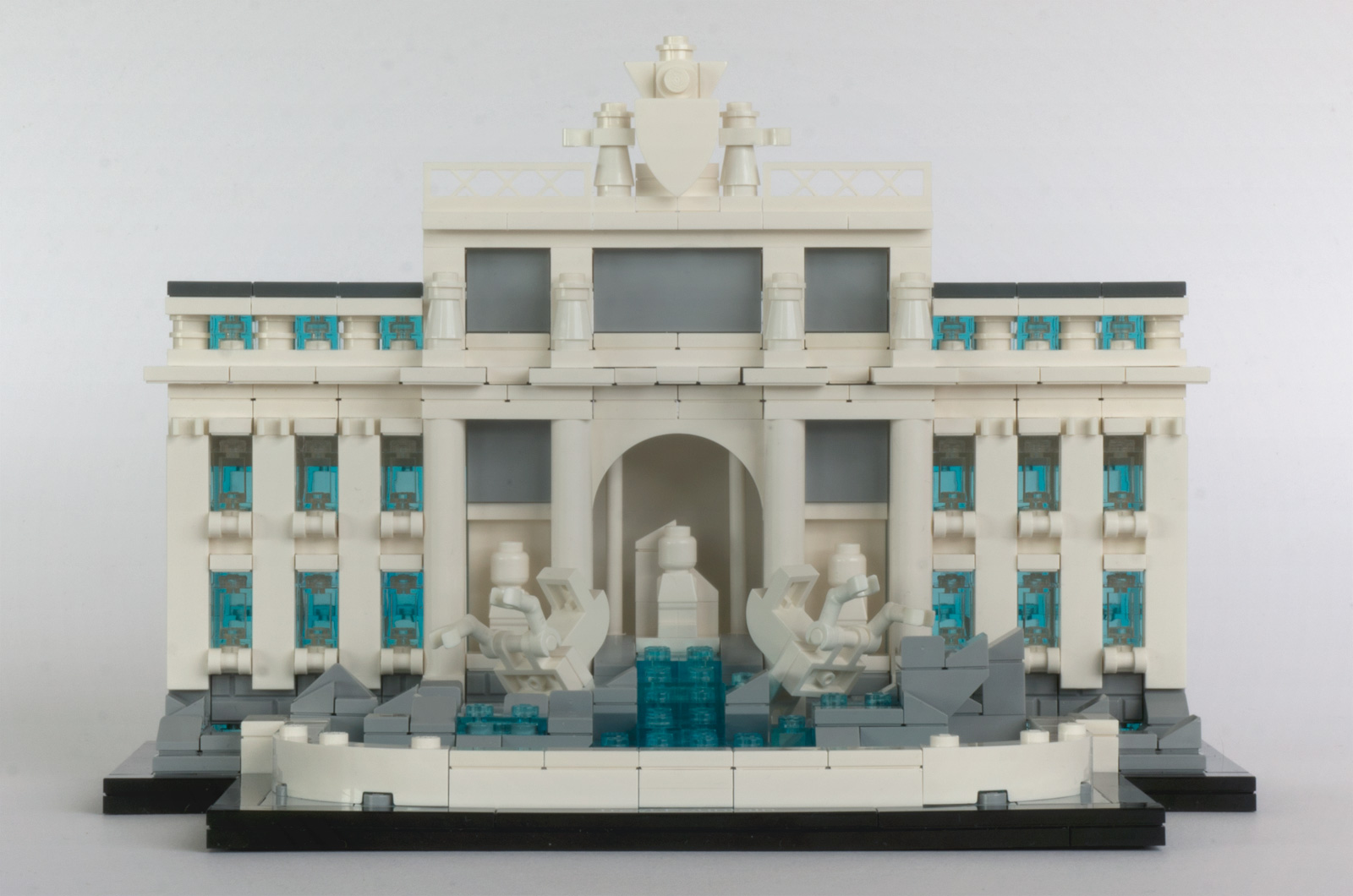 In terms of new and fairly new elements it's not mindblowing, but certainly decent for an Architecture set, with some unusual inclusions. I'm especially pleased with the White microfigs and Trans-Clear 1X1 tiles.

If you've never dabbled with creating architectural details smaller than a standard brick, especially using jumpers to create offset, this set will make a great primer and inspire you to try out some effects of your own. I certainly found inspiration from this design, in the subtle use of reflected light. The backlit effect makes the model look amazing when displayed on a window sill rather than a shelf.

My thanks to LEGO's Community and Events Engagement Team for providing this set.
Posted by: Admin Posted on 6/01/2014 12:02:00 am
Email ThisBlogThis!Share to TwitterShare to FacebookShare to Pinterest
Labels: Architecture, Set review