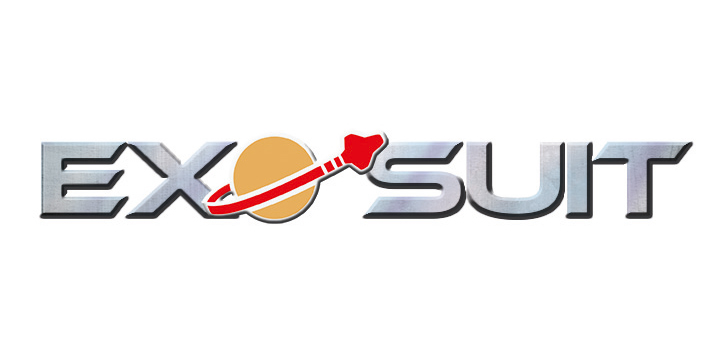 There was great excitement in October 2013 when Peter's model passed the CUUSOO review. Even those of us who aren’t into Space and mecha were glad to finally see a model get approved that wasn't based on an existing object or licensed property. 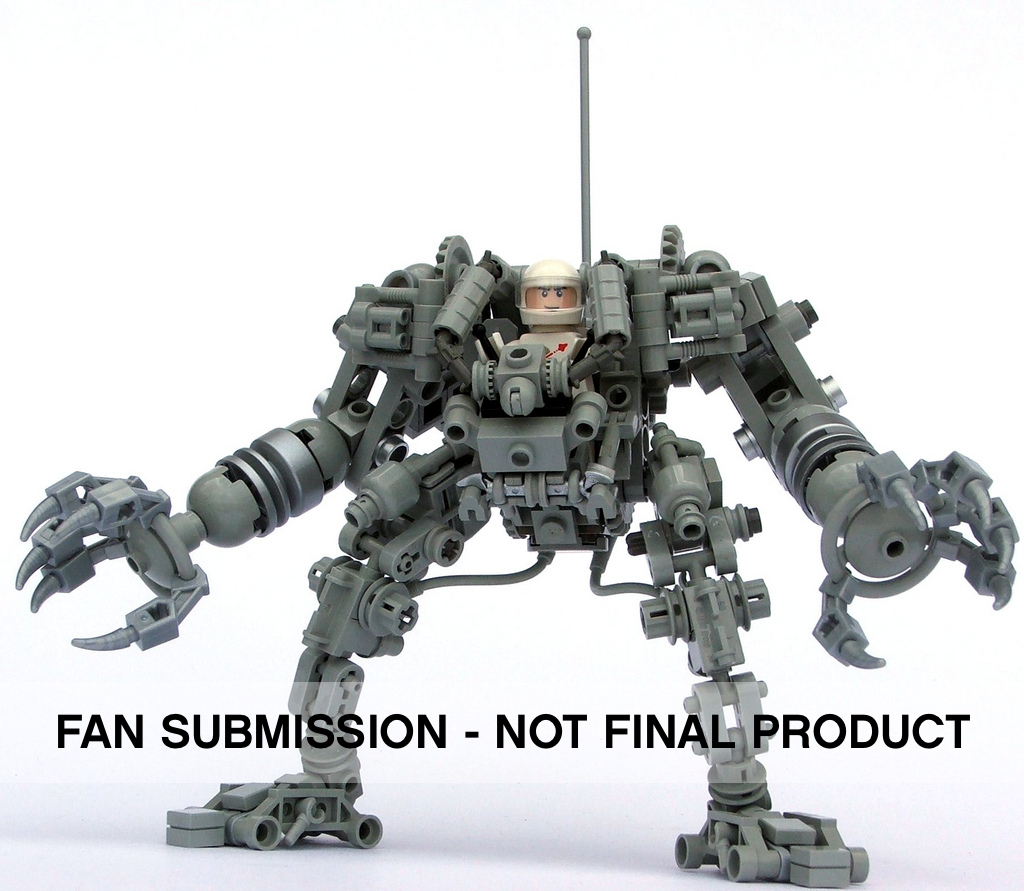 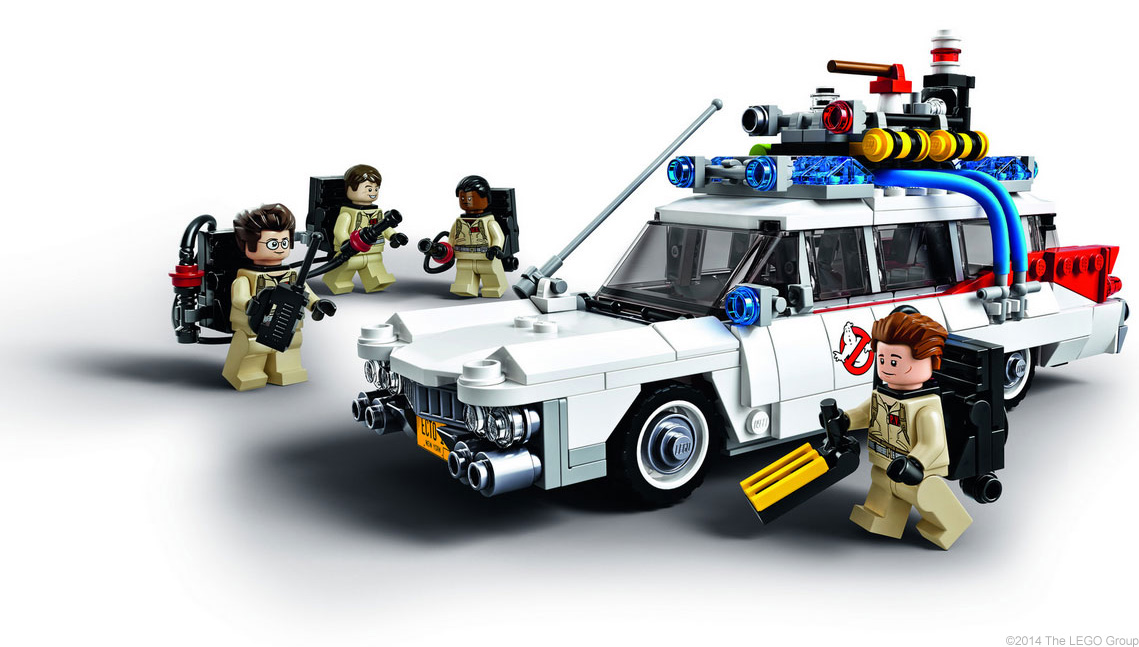 Seemingly, things have been quiet on the Exo-front since then and the Ghostbusters project has been in the limelight - despite being approved later, the official set has been revealed first and it will be released in June, before the Exo Suit comes out sometime in August. Ghostbusters’ move forwards was unrelated to the Exo Suit, which has been happily moving along on its original production schedule.

Having fans direct your marketing is a fairly radical approach, given that TLG have plenty of expert employees who actually do this shizzle for a living. But TLG’s relationship with their fans has been experimental and interesting ever since they realised in the late ‘90s that Mindstorms hackers could teach them a thing or two, and brought them on board to help develop the next version of the product. Admittedly, we fans would like it if TLG did even more experimental and interesting things with us, but in the grand scheme of things, they’re a pretty forward-thinking company in this regard. Indeed, they’ve never involved fans in the marketing of a set quite as much as they are with the Exo Suit. 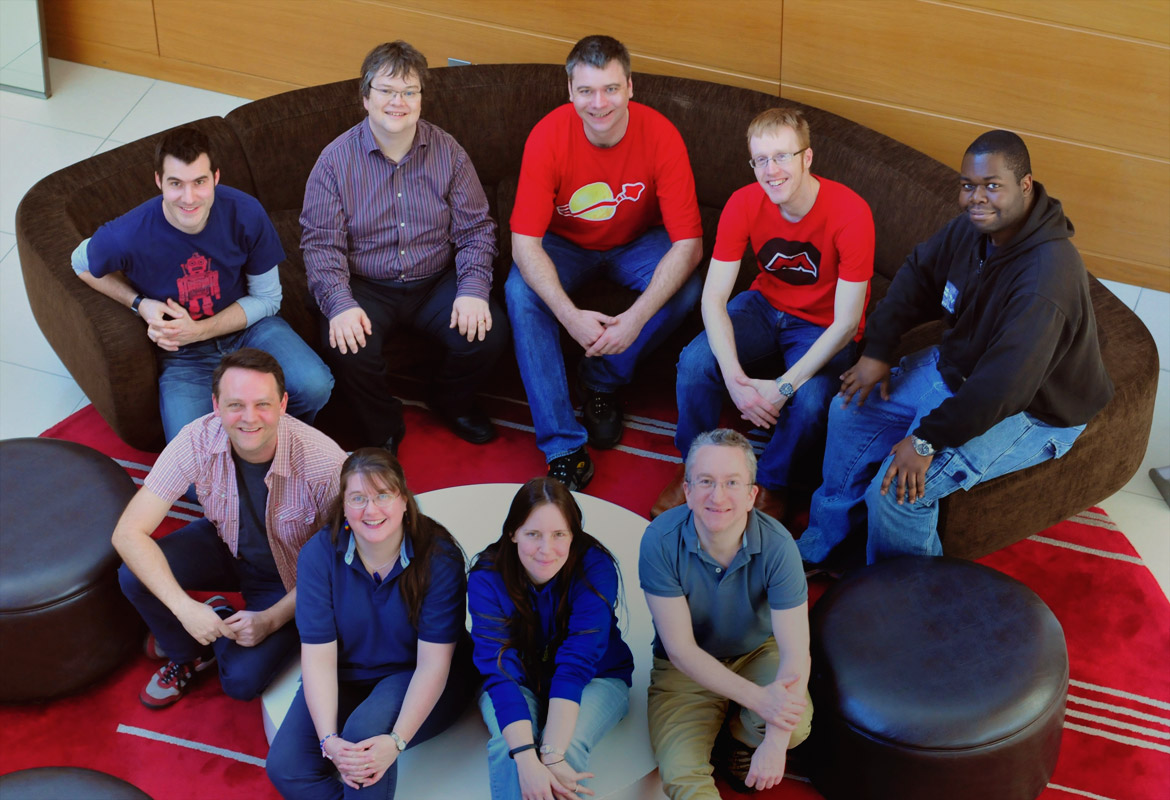 The AFOL team.
Back row: Andrew Hamilton, Jeremy Williams, Peter Reid, Tim Goddard, Drew Maughan.
Front row: Tim Johnson, Julie Greig, Yvonne Doyle, Ian Greig.
Absent: Chris Salt.
Photo © J. Broberg
As you may expect, there’s a lot that we're not permitted to tell you at the moment – undoubtedly, all the things you actually want to know! But the CUUSOO team have kindly agreed to me writing this post to give some insight into the process so far. So what has this actually entailed to date? Essentially, two all-day workshops which were held in Stansted, UK, in January and March with LEGO employees and us AFOLs. The first meeting mostly dealt with how the set should be presented and packaged, and the second discussed how the marketing campaign should pan out.
In case you're wondering what these meetings looked like, Andrew Hamilton (Wami Delthorn) has created this extremely accurate and realistic model. :O)

January’s meeting was highly creative. We didn’t have the finalised CUUSOO Exo Suit model to play with (nor at the March meeting), but we were shown an image that made us all squeee. The big fear that many FOLs have about the CUUSOO Exo Suit is that it won’t be as cool as Peter’s original, which enjoyed the luxury of being full of illegal and weak connections that would never stand up to a moment of a child’s attention. I should know… I’ve broken Peter’s Exo Suit more than once, including at one of these meetings! A teeny knock (honest) seemed to cause every limb to ping itself off in a crazed domino effect. (Self-ejecting feet are both a cool and irritating play feature.) 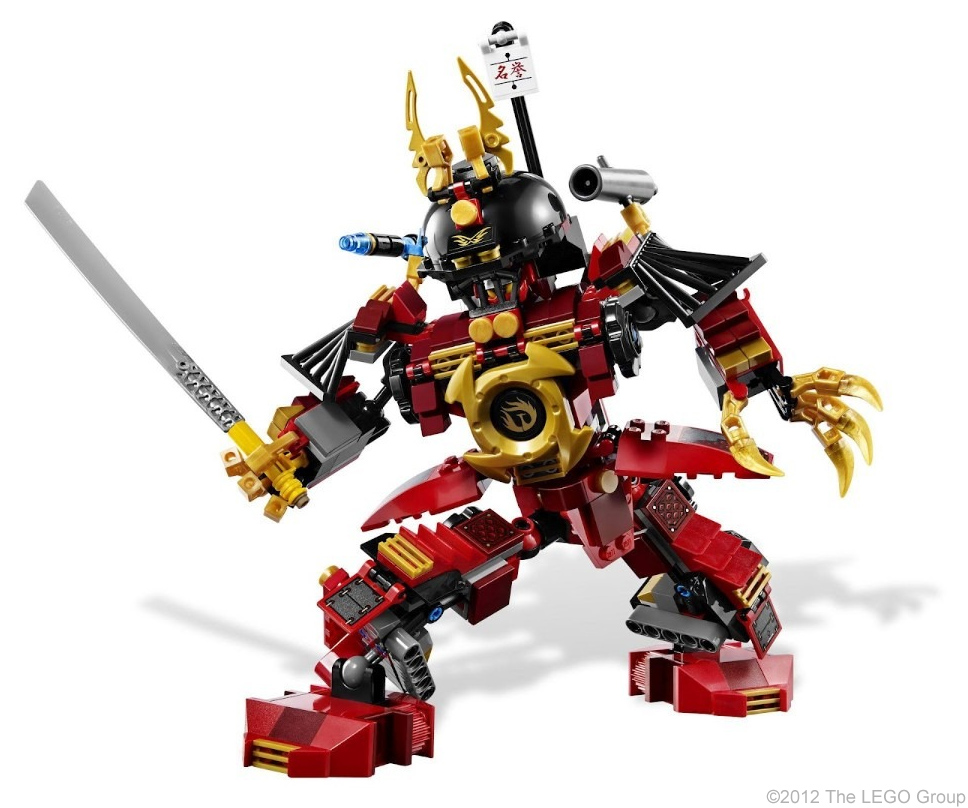 I can’t yet comment on the redesign, suffice to say it was undertaken by Mark Stafford who has designed many of LEGO’s greatest mecha such as Ninjago 9448 Samurai Mech; he’s also an AFOL and good friend of Peter. In late 2013 Peter flew to Billund to finalise the design with Mark, so whilst it is (by necessity) altered, it’s been in safe hands all along. 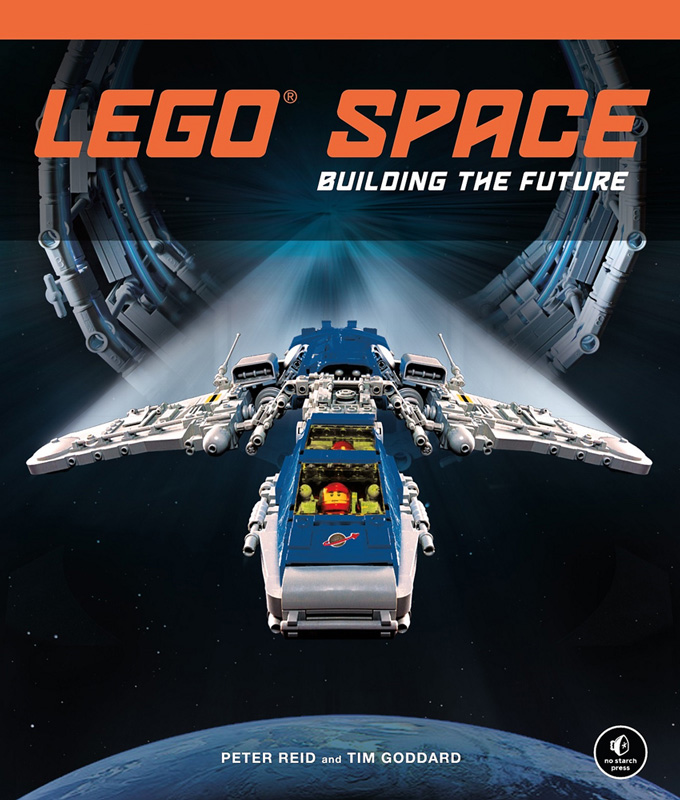 We were split into two groups to start brainstorming ideas around the possible story behind the Exo Suit. As you probably know, because I always go on about it, Peter co-authored an unofficial book with Tim Goddard (who naturally was also part of this team) called LEGO Space: Building the Future.

It re-imagined the various LEGO ‘Classic Space’ themes in a new cohesive narrative - and featured the original Exo Suit. So the CUUSOO Exo Suit ideally needed to work within that universe, and the CUUSOO team were cool with that. But what was the backstory - where did the Exo Suit come from, what makes it exciting? And what is the scenario of the set itself, what is the minifig’s role? (Yes, don’t worry, I can confirm there’s still a minifig in the set!) 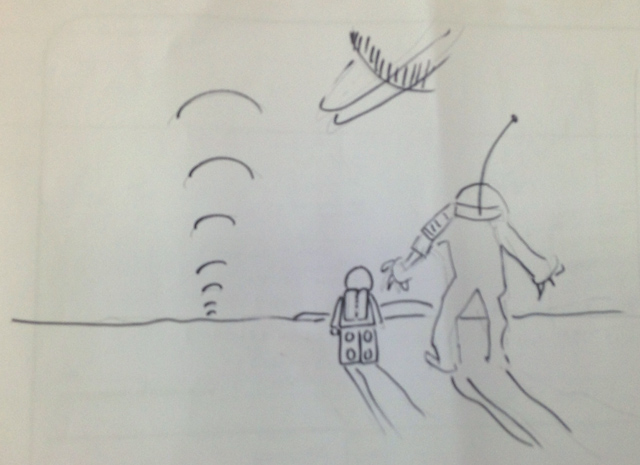 Concept sketch by Jeremy Williams.
Pages of ideas and sketches were scribbled and when we re-combined the two teams, it was interesting how many concepts were similar. As for the packaging, CUUSOO boxes don’t follow a template (aside from a few essential regular inclusions) so the brief was open. Unanimously, we wanted a modern riff on the original Classic Space look and feel from the late ‘70s/early ‘80s, and as you saw from the logo this is indeed the direction it’s been taken. 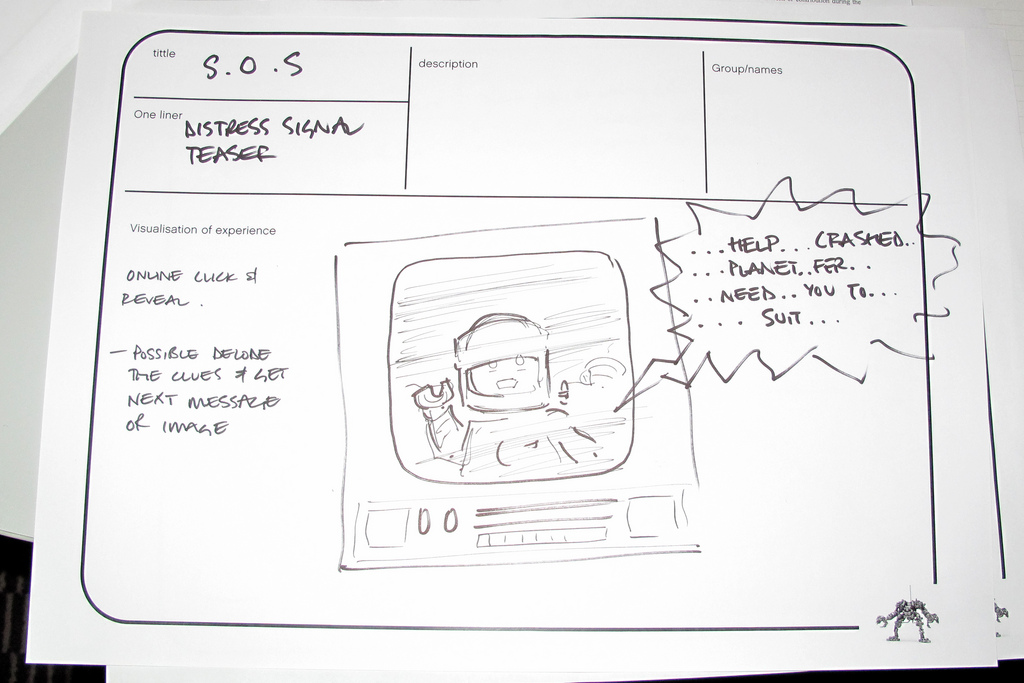 A marketing idea from the first meeting, but will it be used? (And before you guys ask; the little Exo Suit image in the bottom right is Peter’s original model, not the CUUSOO version!)
Photo © I. Greig.
We also brainstormed a range of marketing ideas to help promote the set, and everything was taken back to Billund where things progressed rapidly. TLG and Peter did a lot of work in between the two meetings and we were thrilled to commence March’s workshop by being shown the all-but-final artwork for the box and booklet. Once again I’m sorry I can’t share details yet, but hey at least we’ve been allowed to show you that Classic Spacey logo!
Everyone, including Peter, loved what they saw and the agenda moved on to the marketing campaign. Of course TLG will be reaching a mass market with this set, but as far as they are concerned the pre-release marketing is all about exciting the “alpha fans” - the TFOL and AFOL fan community. So they were extremely open to hearing how we felt the set should be promoted, and when. Our ideas from January had been written up into potential concepts by TLG’s internal Consumer Marketing Agency (CMA) who seemed quite pleased to have received a brief already brimming with campaign ideas! The next few hours were spent reviewing and finessing these, deciding which were strongest and when was the ideal time to run them.

I have to admit, the cynic in me did at first think we’d give TLG all our ideas and they’d just go away and change them beyond recognition. But I’m glad to say that wasn’t the case and that the whole release of the Exo Suit will be a true co-creation by fans and TLG, just like the model itself. Sadly there are still months to wait, but I hope this little peek has whetted your appetites! 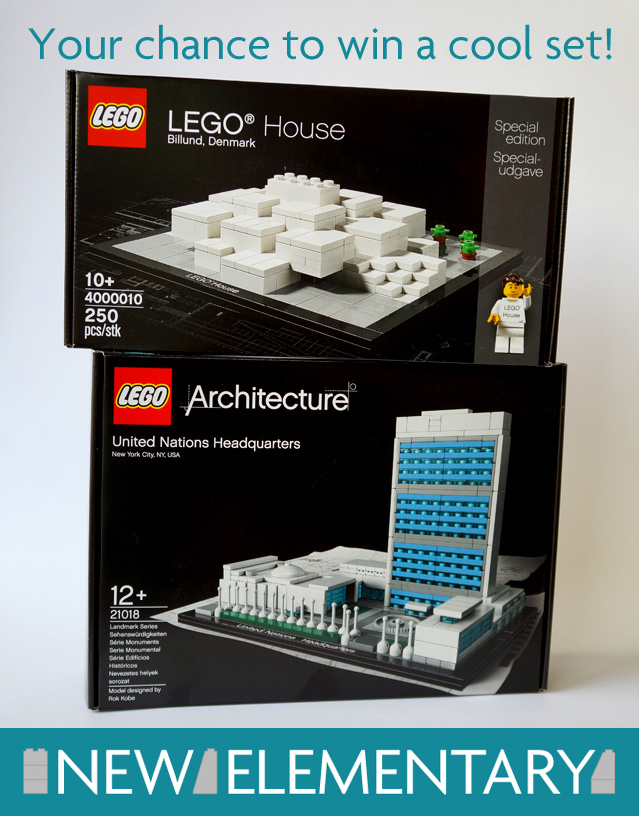