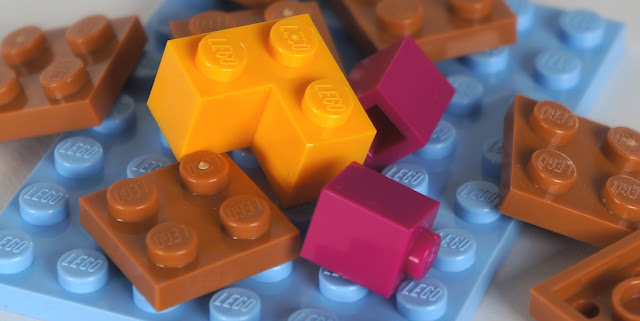 , a set that is stacked with exciting colours but I'm most excited that it has a plate in Flesh [BL]/Nougat [TLG] - the 6X8 (Element ID 6060856 | Design ID 3036). This is a common enough colour of plates in LEGOLAND Resorts - they're needed to create the skin on large scale Star Wars and Friends characters, for example. But in sets, this colour has only ever been used for... well, flesh... on figures and piggies. Also on sausages, which are mostly piggy flesh I guess. That was for some Scala sets 15 years ago, by the way. So using it in a plate (and also a door) in an official set is quite radical. Will we ever see a whole range of plates and bricks to match or will the secondary parts market be AFOLs' only source of other sizes?

One of the final missing basic plates in Reddish Brown is now here; the 1X12 (Element ID 6055145 | Design ID 60479) which probably would have appeared sooner had the same plate not previously appeared in Dark Brown. But it's here with a vengeance - appearing in three sets, including 15 of them in the massive 10241 Maersk Line Triple-E

. The Triple-E is yet another set I'll keep mentioning today...

. It's worth noting 1X4 and 1X6 bricks make a welcome return in Sunshine Ranch, and that you also get 20 1X2s, so that set is a great boost for anyone wanting to build in Magenta. (Sunshine Ranch also has a cool new plate and a tile, but I'll write about those another time.)

and, once again, Ariel's Magic Kiss. This colour is now extremely well-represented in bricks and plates.

Bright Light Orange [BL]/Flame Yellowish Orange seems to be a very popular colour with AFOLs and in official sets it appears in both 'girl' and 'boy' themes. The available parts are growing more slowly this year it seems; all we have so far in the basic department is the corner brick (Element ID 6034175 | Design ID 2357) found in Friends 41035 Heartlake Juice Bar

Yellowish Green [BL]/Spring Yellowish Green is an extremely new colour so I'm very glad to see another plate now available, and once again it's thanks to our friend Unikitty from The LEGO Movie. She's feeling queasy aboard 70810 MetalBeard's Sea Cow and the 1X3 plate that makes up the bottom of her face has turned Spring Yellowish Green (Element ID 6069258 | Design ID 3623). I may as well mention the top of her head is a Sand Green 1X3 plate, which isn't new, but not seen in a set for over a decade which could prove good news for anyone trying to buy the parts necessary to build 3450 Statue of Liberty or 7194 Yoda.

Bright Light Blue [BL]/Light Royal Blue [TLG] seems to be 'a blue too many' for some AFOLs but like it or not, the number of plates available is slowly and surely increasing. The 6X8 (Element ID 6056216 | Design ID 3036) appears in Disney Princess 41053 Cinderella's Dream Carriage

Following an alteration to the Maersk company's corporate blue, Medium Azure is now being used in LEGO sets instead of Maersk Blue [BL]/Pastel Blue [TLG] which, as far as I know, is now a discontinued shade. Once again the Triple-E brings us very useful parts: the 1X2 brick (Element ID 6004945 | Design ID 3004) and the corner brick (Element ID 6052877 | Design ID 2357).

I hope this post has alerted some of you to elements that you've been hoping for!