Nature in tooth and claw

I began December by discussing the new ball and cup connectors that I'd received in two new Chima sets (70126 Crocodile Legend Beast and 70127 Wolf Legend Beast) and promised I'd discuss these sets more fully "soon". Well, a horrible 'flu and the general nightmare of All Those Christmas Things to Do put paid to that! But here is the promised post at long last, and it's something to get your teeth into. Ba-doom kissssh. I'm here all week.

Most interesting of all are two new parts that have been based on part 49668, the 1X1 plate with tooth, which appeared a decade ago and has seen wide usage (not only as teeth and claws but also quite random stuff like headlights and ice skates) and been moulded in a surprising sixteen colours. That part has a couple of inherent problems though, each of which have been addressed by these two additional toothed parts. 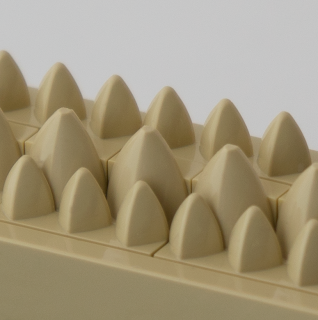 Firstly, if you use the original 1X1 part as a claw you ideally need several of them in a row, which quickly creates a very wide claw and therefore a large animal. So the first of these new parts is 15208, which I'll call the tri-tooth. Each of the teeth is a scaled down version of the tooth from part 49668 and they sit fractionally apart from one another. A slightly frustrating effect of this is that when you place two or more of these side by side they're not perfectly regular, as there's no gap between the teeth on adjoining parts.

These new smaller teeth extend out by just a little over half a plate width, which will cause you some irritation if you're trying to abut them against an offset plate. However plates with rails extend out just under half a plate, so you can abut the tri-tooth to a railed plate perfectly, as shown in this decorative example. 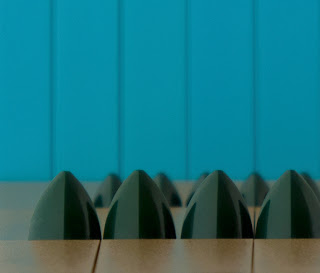 For these rows of microscale trees, I've employed the similarity between the original 1X1 tooth and the new tri-tooth to create a basic 'forced perspective' shot. The front row are the larger 49668 and the back row the smaller 15208.

Perhaps what struck me most about this part is how unusual it is for a section of a LEGO® part to be divided into thirds. It feels a little 'out of System' but isn't really, since the teeth are purely decorative and don't connect to anything. The temptation is to find a technique that allows you align other parts with one of these teeth! I've not yet investigated this but do let me know of anything you come up with by uploading pics somewhere and adding links in the Comments at the bottom of this post. 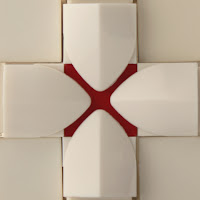 
The second issue with the original 1X1 tooth part is that if you want to use it as a tooth it needs to sit vertically, so you need SNOT, which might complicate the build. This is possibly more of an issue for LEGO Designers creating simple models than for us fan builders. However, the solution this next new part offers is very welcome; a vertical tooth - part 15070. It's very odd-looking, resembling a bracket. 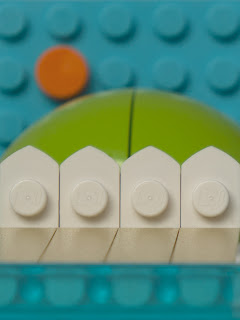 The tooth section projects outward from the 1X1 plate (fractionally less than a railed plate does) which creates an interesting shape on the top side of the part reminiscent of a hut in microscale! I seem to be in a forced perspective mood today.


But as for the side with the actual tooth, apart from representing a tooth or claw or some other real-world object, it's a really interesting piece just for creating detailing or texture - especially when combined with textured bricks or arranged repetitively amongst other parts. I had a lot of fun playing with this part and seemed to come up with a lot of things that would look nice in a castle!


A new element that appears in all five Legend Beast sets is this shield for minifigs, which previously has only appeared with printing on it. I've seen decorated oval shields used in MOCs before - most recently in Alice Finch and David Frank's astonishing Rivendell model - so having an unprinted version will definitely be of use to some.

As for the sets themselves, I found the animals to be more realistic than expected. However the animals aren't super-realistic, nor I imagine were they intended to be - they're based on cartoons. Within the Chima TV show, apparently the Legend Beasts are animals that decided not to anthropomorphise themselves, unlike the minifig tribes that we are familiar with. I've never properly watched the show but doubt it fully explores the ethics around sentient creatures deciding to genetically modify themselves into a master race that descend into war. Or maybe it does. Um... where was I? 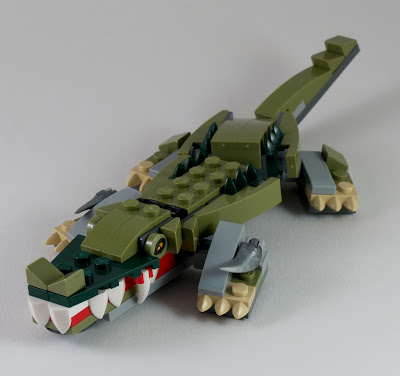 Oh yes, the aspect that is unrealistic are the feet which, at two studs wide and (at greatest) five plates high, are disproportionate. From a practical angle I suppose they're this wide because they wanted to use the tri-tooth at one end and the ball/cup joint at the other. From the aesthetic angle, I put it down to creative license - as I was saying, despite being 'pure' animals the Legend Beasts are being represented here with oversized body parts, as is common in Manga. It works with the wolf - with the crocodile, less so. The wolf's head is clearly oversized to match, the feet are further away from the body and they're centered in relation to the legs. All these aspects add up to the wolf looking very impressive, but by contrast the crocodile just seems to have fat sticky-outy feet. This is partially alleviated by the weighting of parts that top the feet, but perhaps the lesson is that if you want to use the tri-tooth as a realistic claw in your models, you'll need to build something a little larger than the Legend Beasts.

Given that I previously discussed the ball and cup connectors at length I will just comment here on their usage. The wolf is highly posable with a great range of movement, which by comparison leaves the crocodile seeming rather limited. The crocodile largely only moves his feet on the horizontal plane and it is only the presence of a boat stud on his belly (presumably included to allow kids to slide the crocodile across the floor more easily, but it doesn't really add anything to the shape or realism of the model) that gives some space for the feet to have a little vertical movement. It's no fault of the design, and is simply caused by the effect the shape of a crocodile has; but this isn't the most thrilling use of the new ball and cup connectors.

The croc is still chock-full of personality though. He seems to me to be a very sneaky chap thanks to his flatness, the way his legs move side to side, and his evil eyes which are printed Olive Green 1X1 round tiles (Element ID 6020144). Much as I would prefer those to be unprinted for wider usage, they'll nevertheless be fun eyes to use in your own creature builds. Most fun of all is his enormous mouth with ginormous tongue inside! The tongue is another printed Olive Green tile - this time a 2X4 (Element ID 6058771). 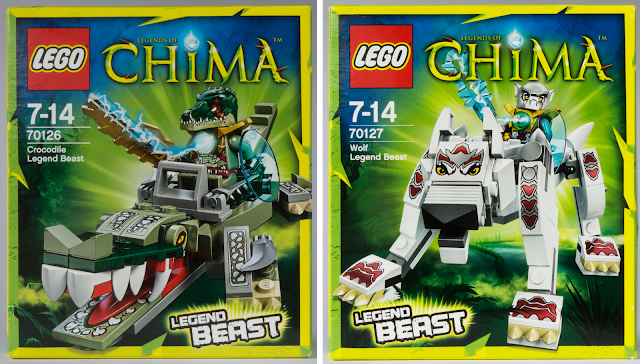 Although the crocodile has less ball and cup connectors than the wolf, it does have the tri-tooth in Dark Green [BL]/Earth Green [TLG]. Four of these are used with SNOT so that the teeth stick upwards, to form the ridges of the crocodile's back - a really lovely idea. Plus you get four tri-teeth in Tan [BL]/Brick Yellow [TLG] in both these sets. The other parts advantage to the crocodile are the vertical teeth, which don't come in the wolf set. You get a very healthy eight of them, compared to just two in 70123 Lion Legend Beast. The vertical tooth also comes in Yellow [BL]/Bright Yellow [TLG] in 70124 Eagle Legend Beast - a solitary yellow one makes a fine beak.

A final part definitely worth mentioning is the 2X2 bow, part 15068, which I highlighted when discussing 10243 Parisian Restaurant. The wolf has four of these on his feet in White (Element ID 6047220), plus a fifth which is printed with his eyes and forehead. Oddly the feet come with stickers as shown above - I'm at a loss to guess why the face is printed but the feet are stickered.

So if you haven't realised it by now; these Legend Beasts are excellent parts packs for the price. The ball and cup connectors make them unusual builds too, so they're definitely worth picking up!
My thanks to LEGO's Community and Events Engagement Team for providing these sets.
Posted by: Admin Posted on 12/30/2013 10:19:00 pm
Email ThisBlogThis!Share to TwitterShare to FacebookShare to Pinterest
Labels: Set review, Technique