It was always possible to center a second jumper, or any brick with a recessed stud, underneath the old jumper. But with this exciting new version we can now use parts with a regular stud. This new underside, the "nail rail", is not a new invention - it appears on some existing bricks, like some variants of the 1X2X5 for example. But for this to appear on the jumper? Ah, this is sweet joy, because small parts have wider application than large ones, and it will make some previously fiddly offset techniques easy - as well as opening up new possibilities.

I say new possibilities - in fact, there aren't as many as it seemed to me initially. Thing is, once you have more than one point of connection in your structure, you can use a 1X2 tile instead of a jumper. Take the example shown here; the Light Bluish Grey jumpers are the new style but they could easily have been tiles; the top plate would still be held in place by the White connections. Sure, the new jumper provides extra stability, but it hasn't wholly enabled this technique to exist. 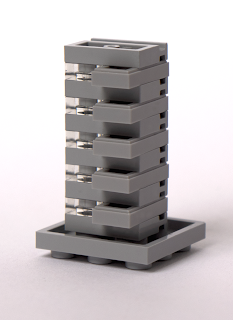 This example of upside-down building is a better example of an effect that was possible previously, but the new jumper makes it much more stable - and easier. You could have built the balconies of this microscale tower block using upside-down 1X2 tiles; it just would have been a bit of a pain to align them all and keep them that way. The other parts I've used in the tower are 1X2 plates with rails and 1X1 plates. But had I wanted to use 1X1 tiles instead of plates for some aesthetic reason, the new jumper would have been essential to hold the structure together.

I couldn't resist sitting the tower on the lovely 3X3 plate introduced last year. A quick bit of news on the 3X3 - it now comes in Dark Bluish Grey [BL]/Dark Stone Grey [TLG] in Lord of the Rings sets 10237 The Tower of Orthanc"

, and surprisingly the third colour it's been made available in is Bright Pink [BL]/Light Purple [TLG] which you'll find in Friends 41025 Puppy's Playhouse. 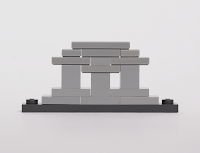 Here's a quick example that would not be possible without the new jumper. Each of the three 'columns' in this microscale archway are independent of one another - there is no additional connection at the structure's top - and so the new jumper is required.

But I think the real value in the new jumper will not necessarily be when it is on show, as in the previous examples. It's a functional piece above all else and will usually sit hidden at the heart of the cool effects you create in your MOCs. 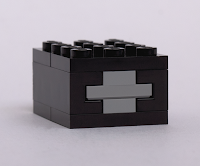 I'm thrilled because it will really help with a favoured technique of mine; using jumpers in combination with part 2653, the 1X4 brick with a plate-high groove. This basic picture shows what I mean - it's great that I can now use anything under the Light Bluish Grey jumper in the middle, instead of having to work around using only tiles or parts with recessed studs. I've used this technique several times to create an offset typeface with serif. It's the same principle but utilises the jumpers to offset the lettering by half a brick. This picture is old so uses the original jumper; consequently you can spot I've had to use 1X2 tiles underneath the jumpers which are noticable for the tiny groove at their base, included to assist removal. So whilst I will now be able to avoid including that groove, unfortunately I'm lumbered with the groove now being present on the jumper itself.

Yeah, let's talk about grooves, baby. It was a happy day for children's teeth but a sad one for aesthetics when the jumper was changed to include a groove. Presumably the catalyst for change was the introduction of a larger jumper plate - the 2X2 - in 2010, which had the groove. TLG like to keep "families" of bricks aligned, and the 1X2 'got its groove' the following year. It's a little ironic because the jumper had been around and (functionally) unchanged since 1978, yet here we are just a couple of years later and another new mould has been created for the 1X2 jumper. Like London buses... you wait for three decades and two come along. But absolutely no complaints from me - I'd just love to know what bright spark thought of this change!

The greater irony is that tiles underwent the very same groove alteration in the mid-1970s, a few years before the jumper plate was even invented. Perhaps it was felt by the original Parts Designers that the single stud was sufficient for kids to detach jumpers, or they just didn't forsee the issue. But surely by the time that first jumper mould (or later moulds) wore out, the issue was apparent? Perhaps TLG have adopted tougher standards on ease of removal of late - or as I suggested, the 1X2 only got a groove because the 2X2 has one.

You can expect the new-style jumper to begin randomly appearing in any sets containing Light Bluish Grey jumpers from now on, and I suspect White ones are out there too as those are the two colours Brickset currently has listed for the new part number, 15573. Doubtless all existing colours of jumper will follow. I found mine in 21105 Minecraft Micro World The Village

. Don't rush out and buy it expecting to get some too; when TLG change a mould they don't keep the old and new styles separately in their factories. Everything gets mixed together and you may even find both styles in the one set. A lot of AFOLs find this supremely irritating, but given kids probably couldn't care less it makes financial sense for TLG not to worry either.

This has tripped them up in the past however; 10211 Grand Emporium

contains a white flower which is attached to the building via its recessed stud. After the set was released, quite independently the mould was altered so that the stud was a regular solid one. Emporium sets began appearing with the new mould, making the model impossible to complete. TLG had to send the old style flower out to everyone who complained, and presumably had to distinguish between the two flowers on the production line for all future copies produced. I wonder if they even still had the old mould by that point - these things are so incredibly confidential, they are destroyed once decommissioned. 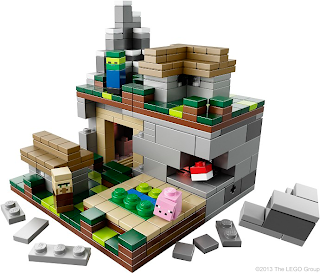 I've never played Minecraft so had no interest in the actual build (but I highly approve of kids getting into microscale). I did leaf through the instructions, to see if they take advantage of the new jumper's capabilities - they don't. That makes sense, given the Emporium example. If Designers specifically wanted to use the new jumper in a set, I assume an exception would once again need to be made to the factories' storage procedures to ensure the right variant was included. Which begs the question, when will Designers be able to safely utilise the new jumper? How will TLG know when they've exhausted the supply of old jumpers if they just mix them all up? (It's these kinds of hopeless questions that keep me awake at night.)

If you're wondering why I bought a set I didn't want to build, you'll be unsurprised to learn it was because of new elements. The most exciting aspect of the Minecraft sets for me is that they have have printed plates, which as far as I recall TLG have never done before. Look at these little lovelies! I've stacked them to indicate how wonderful they would be as decorative elements, but I would need a solid plan for a build before I forked out the money it would take to buy these by the dozen. Also seen here is the printed 1X1 tile from the set, which I understand is the face of a little pixelated piggy. Cute. 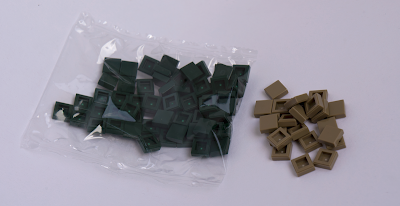 Of far greater use however are some other 1X1 tiles in this set. For the first time ever, they come in Dark Green [BL]/Earth Green [TLG] and Dark Tan [BL]/Sand Yellow [TLG]. Nice quantities too - the Dark Green ones even arrive separated in their own little polybag! Talk about a dream parts pack...
Posted by: Admin Posted on 9/08/2013 08:18:00 pm
Email ThisBlogThis!Share to TwitterShare to FacebookShare to Pinterest
Labels: Most popular, Technique