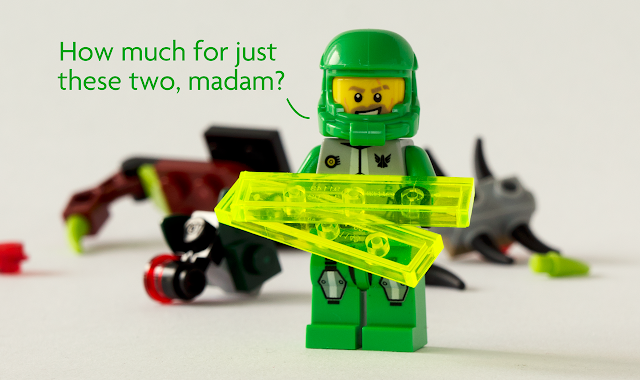 
A quick 'new element alert' for UK readers if you're not already aware; high street branches of WHSmith's are selling several LEGO® polybags for £2.99 each and of interest to me is 30231 Space Insectoid (which was a Toys R Us promotion during February in the US). It's the only set so far to contain these tiles in Trans-Neon Green [BL] / Tr. Floure. Green [TLG], and there's two in there, to make the space bug's little wings. It's the fifth transparent colour that part 91143 has appeared in since 2010.


Don't listen to Green Galaxy Guy - you'll want all the parts in this poly; nothing else is exclusive but plenty of great elements considering there's only 27 of them!

From what I've read on Brickset it seems stocks are limited and sadly there are already reports of greedy folk buying up entire boxfuls for resale. So get down there quickly, and please be fair guys - remember the kids would actually like some too!
Admin: Tim Johnson Posted on 6/29/2013 10:34:00 am
Email ThisBlogThis!Share to TwitterShare to FacebookShare to Pinterest
Labels: Event