Pick a Brick and Bricks & Pieces were two different ways to obtain loose LEGO® bricks directly from the company, and as you may be aware the two services have just been combined into one. 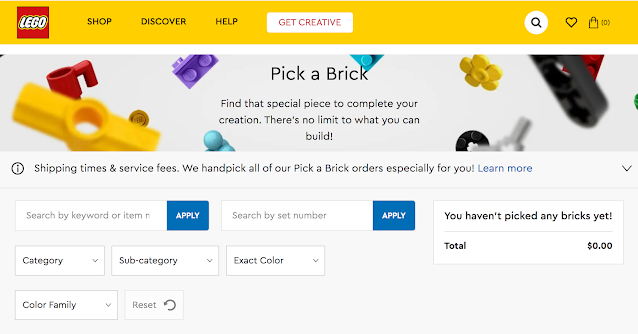 There are many advantages and improvements to the new system, which LEGO have been very communicative and transparent about with the fan community. However, there is a major change which renders the service largely useless to many, especially those of you who read this site: new elements are not currently available. And it might stay that way.

Complex internal discussions have been going on at the LEGO Group and were still underway at the time the new service went live this week, and so they erred on the side of caution in the meantime and new 2022 elements are not currently available. Depending how these discussions go, it may become the rule  that there is some sort of delay before they are added; we don't yet know.

Neither do we know quite what the definition of a new element will be – new moulds, decorated elements  and recolours of existing elements, or just some? How long will elements be held back? We've asked for answers via the AFOLET team, who have the often unenviable job of reflecting AFOL views back to the rest of the company. They will let us know once it is decided, and we will pass it on to you.

Of course, new elements can still be bought within the new sets, but I don't need to explain to you the issues with that! And with time, they will become available on the third-party sites like they always have.

Various other issues are being raised by the community too, such as price increases on elements. We won't delve into all that here, as the single issue of not being able to get new elements truly is the overwhelming issue for us. How about you; will this affect you, and how?

Posted by: Admin Posted on 3/17/2022 10:34:00 am
Email ThisBlogThis!Share to TwitterShare to FacebookShare to Pinterest