Mitch Henry (CZQ on Flickr) completes our Forbidden Elementary Parts Festival today which, as its seed parts, uses the 3 weird LEGO® pieces that rubber bands used to come on back in the 2000s. 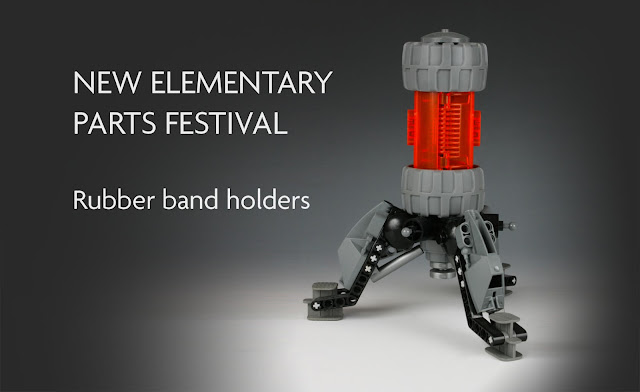 Growing up, Bionicle was always my favorite LEGO® theme. The characters were fun, the world was mysterious and intriguing, and of course, the parts were unlike any other LEGO elements I’d seen before. My first Bionicle set was 8573 Nuhvok-Kal, part of the Bohrok-Kal subtheme. The Bohrok are considered by many to be the peak of Bionicle; appealing design and multiple play features made them very popular.

One play feature was pushing a lever on the back to flick its head forward. To make the head return to its resting position the sets included a rubber band. Naturally, this means each Bohrok came with a rubber band holder as well. When I was approached for this parts festival I had just picked up a lot with all 6 original Bohrok, so I was eager to participate. 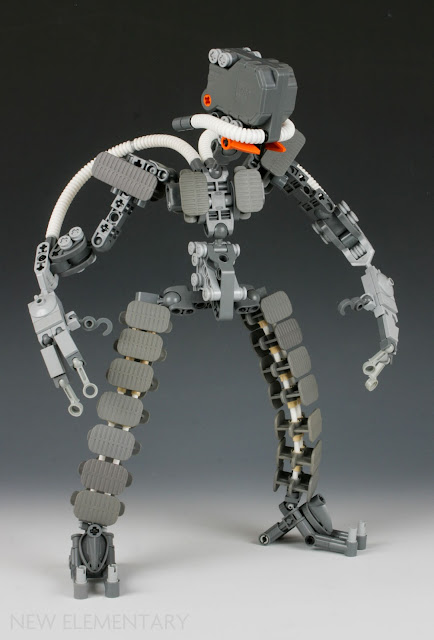 As a lifelong Bionicle fan I knew I had to make at least one humanoid robot. For this MOC I wanted to do a 'partspam' build since that’s not something I usually do. What resulted is this bowlegged mechanical monstrosity. This is also my only parts fest MOC to use the longer variant.

Though it doesn’t have quite the same texture, the Pullback Motor 5x6x3 12787c01 for the head matches the aesthetics of the rubber band holder well and helps to add a nice splash of color.

Silhouette is an important part of the character design process (and one that I prioritize highly) so I wanted that long-and-limber look of the stacked rubber band holders to continue through the whole MOC. The torso and arms were kept as thin as possible to keep things consistent. Hose, Ribbed 7mm D. 11L 78c11 not only accentuate the stylized proportions but also provide some extra stability to the whole MOC.

Next up is a piece of LEGO tech inspired by the powerups from Nintendo’s Metroid series. 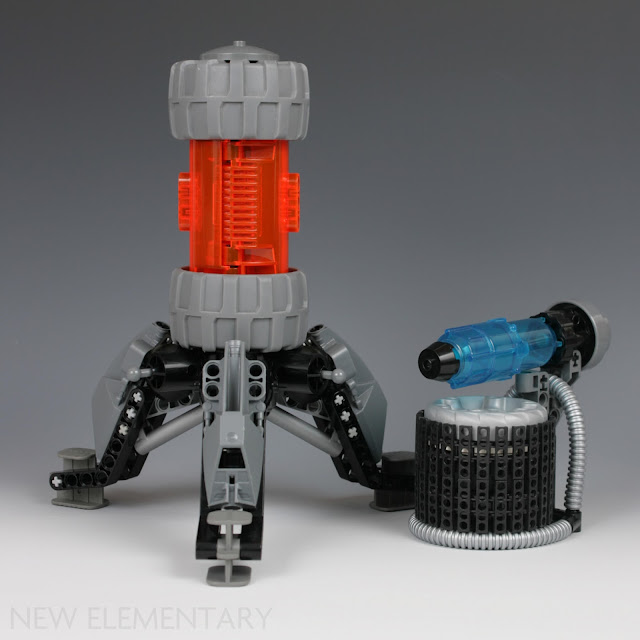 This MOC was built as part of a small collaboration with my friend Grayson M. Between the two of us we created 4 total powerups. Check out his page for the creative part usage that he came up with.

While I was looking at the rubber band holder I couldn’t stop thinking about the texture on the top and bottom of the piece. It’s unlike anything else LEGO has ever produced and the soft plastic used to make the part adds to its unique look. I decided to repeat the element to create a conveyor belt for a T-shirt screen-print drying machine, something I became all too familiar with for a time.

The rubber band holder has unusual dimensions so building around it (especially as an inexperienced system builder) proved to be a bit of a challenge. When lined up next to each other, there’s enough space for a technic liftarm between two rubber band holders. Using 1x2 bricks with 2 pinholes stacked with 1x6 plates I lined up a handful of the parts and the texture flowed seamlessly. There’s some empty space on the sides that’s too small to be covered with a 2x2 plate so I substituted a 1x2 with groove instead. At about 5 bricks high at a minimum, it may not be the most efficient technique, but for a large-scale city build the rubber band holder may be just what you need.