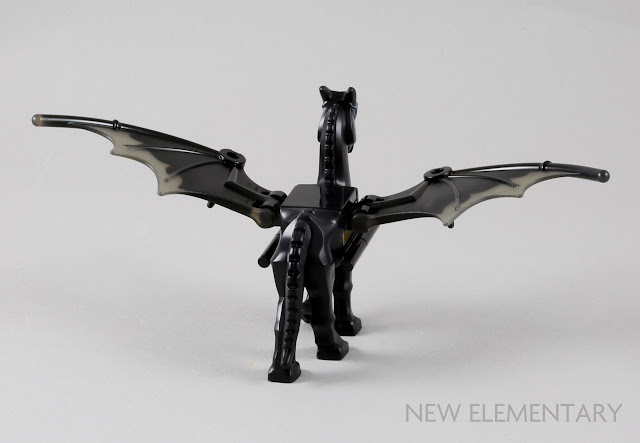 The pair of Wing W/ 3.2 Shaft, No. 2 (Element ID 6236256 | Design ID 38547) are interesting, with Black and Transparent Brown [TLG]/ Transparent Black [BL] used as the combination of colours to give the impression of wings that are thinner and stretched, like those of a bat. 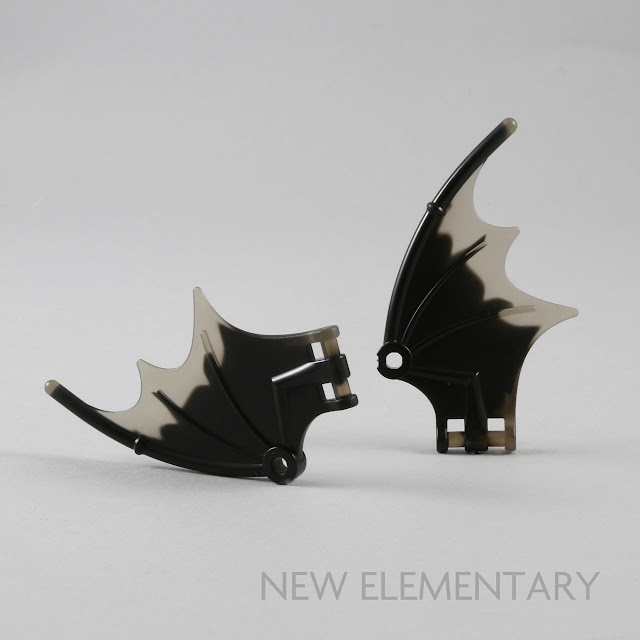 The main attachments are the two 3.18mm bars (used in the set to attach the wings to the body),  but there is also a 3.18mm hole and the curved outer edge is also 3.18, to allow further connections. 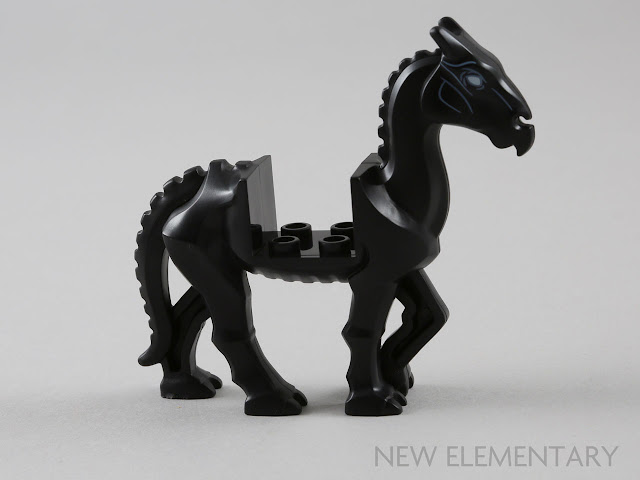 Thestral’s body - Black Horse No.3 (Element ID 6236734 | Design ID 39652) - is the other new mould in this set and accurately depicts the skeletal body and ‘dragon-like’ head.  This is not the sort of horse that gallops at a race course or is used by a cowboy. 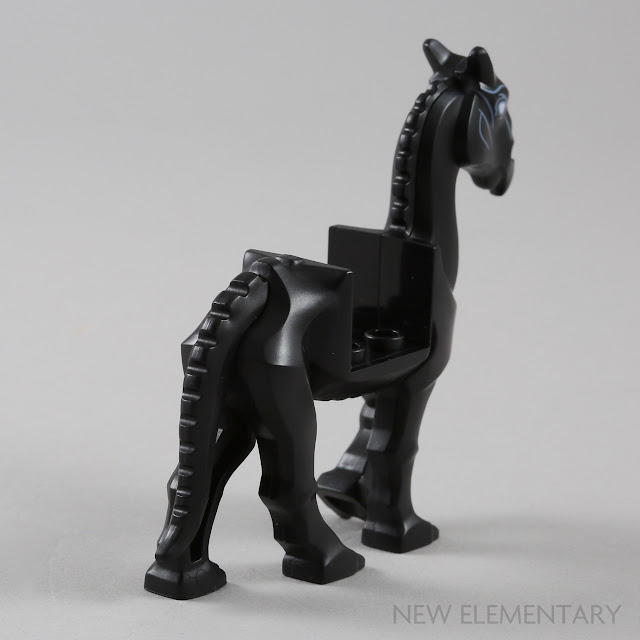 We have already discussed the new wands and their associated sprues, but I just wanted to remind readers that this is the only set containing it in Medium Lilac [TLG] / Dark Purple [BL] (Element ID 6236260) at present. 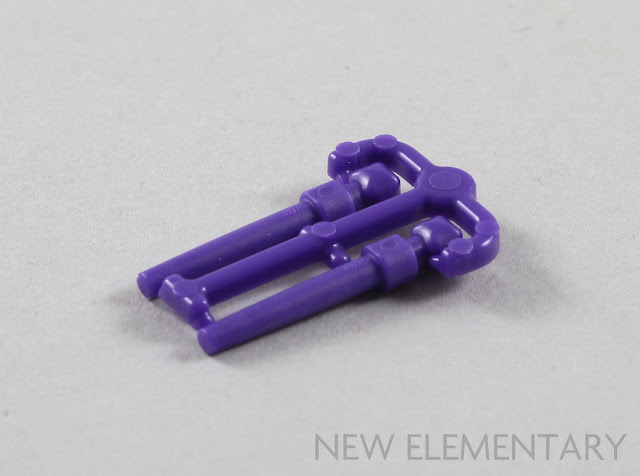 Moving on to Newt’s Case, there are a few more new elements, although these are mainly related to the beasties within the sets. (I'm from Scotland, where a beastie is an insect or a wee animal.) One is the extremely cute little Niffler; Animal, No. 54 in Nougat [TLG] / Flesh [BL] (Element ID 6236417 | Design ID 39561). 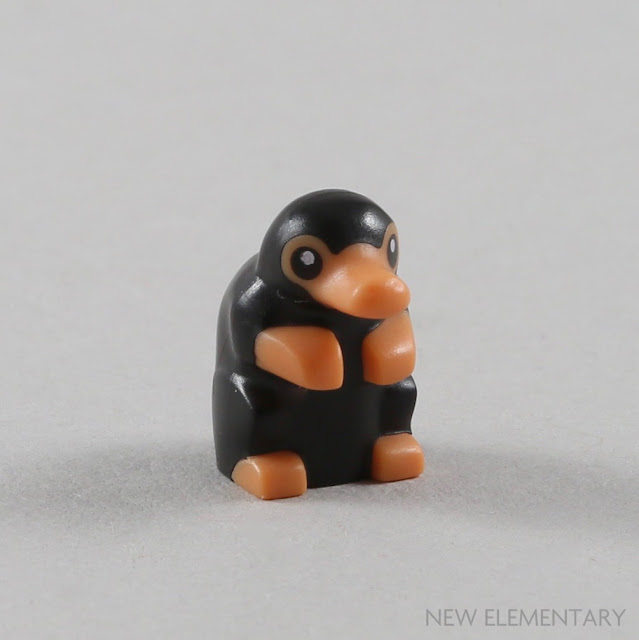 Niffler is able to connect with a stud thanks to the anti-stud recess on the base and, for scale, you can see him here next to the cat and owl from the LEGO Minifigures Wizarding World Series. 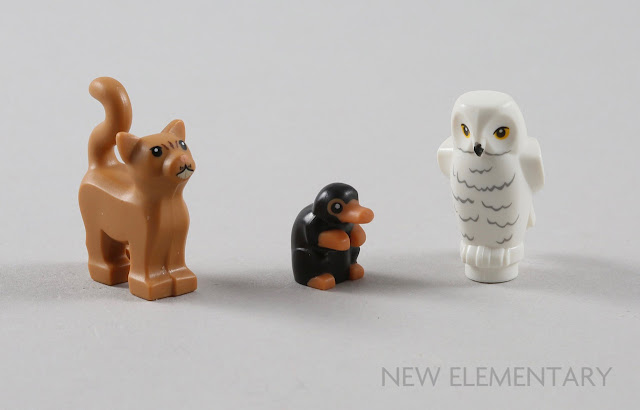 The heads of Thunderbird and Occamy are new elements: 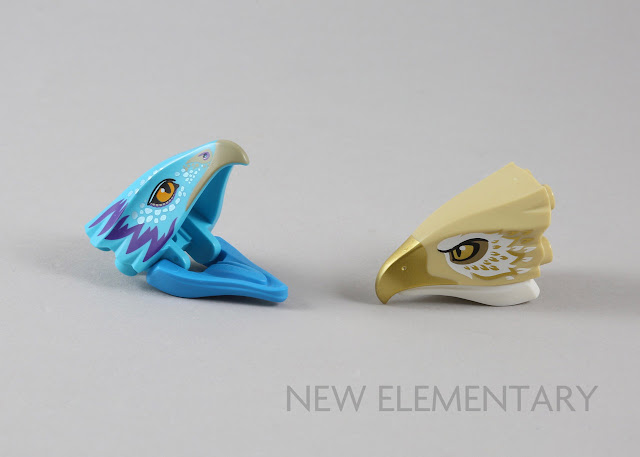 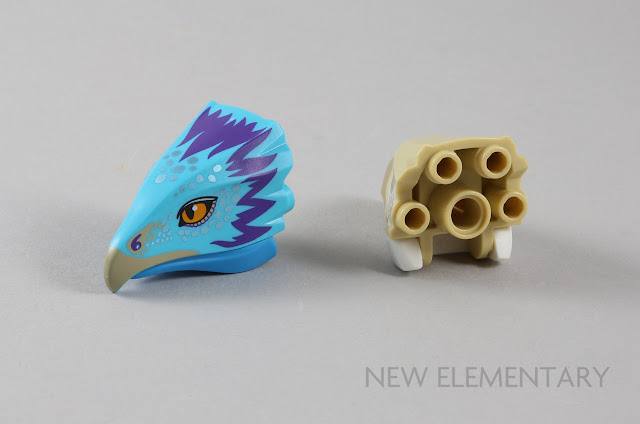 The lower part, Creature Jaw No. 5 (Design ID 39124), makes its debut in this set and it supplied in two colours: Dark Azure (Element ID 6236913) and White (Element ID 6236909). There are three opening positions due to click points on the jaw hinge: closed, half-open and wide-open. 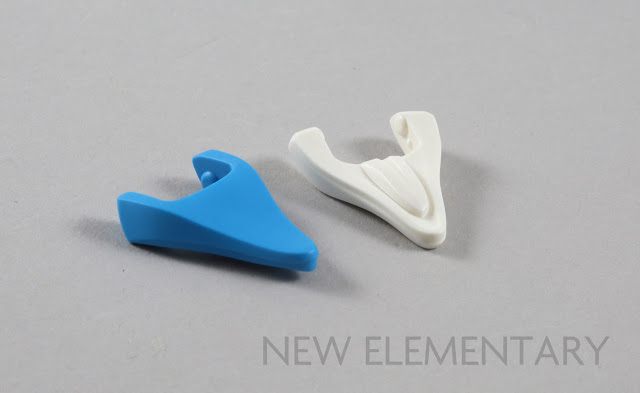 These are especially beautiful with their Metallic Gold print which, like the head elements mentioned above, are safely contained within their own little plastic bags to protect from being scratched. Each wing is shaped with a subtle curve and detailed feathers, with two 3.18mm bars for connection. 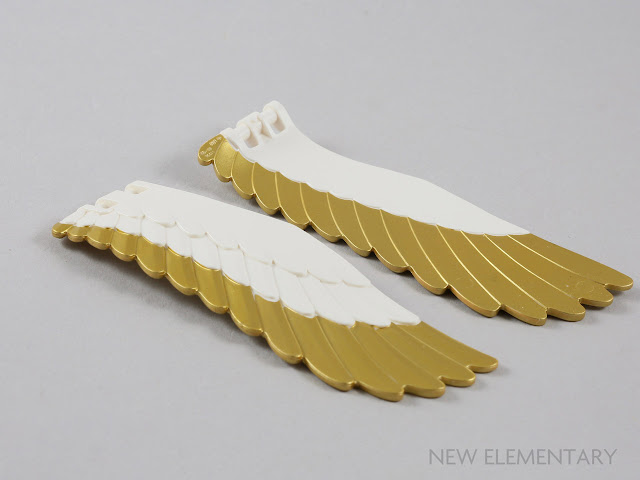 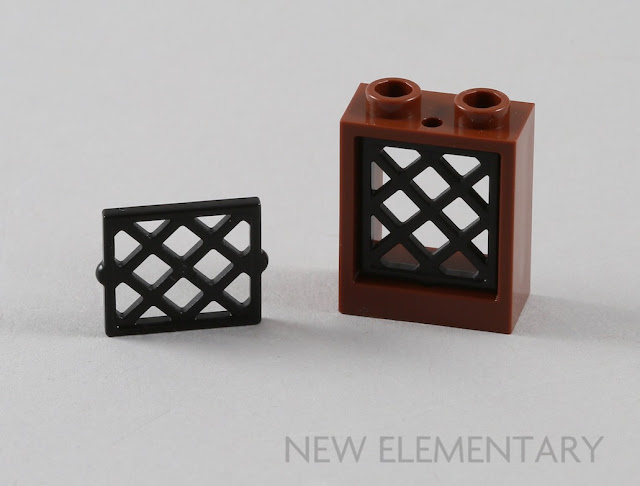 Let's now move on to the existing parts that come in new colours in these two new LEGO sets.

There are three elements that appear in new colours in Grindlewald’s Escape. The first is Spoked Wheel Ø56 in Titanium Metallic [TLG] / Pearl Dark Grey [BL] (Element ID 6233804 | Design ID 33212), used as the rear wheels of the carriage. 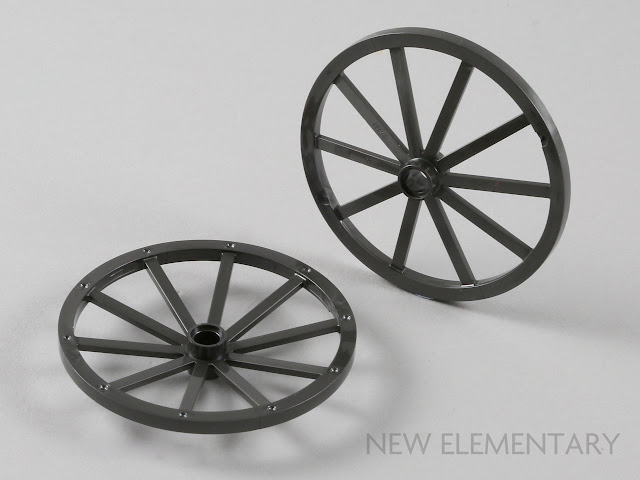 One element I was excited to see was Grass, W/ 3.2 Tube in Black (Element ID 6233805 | Design ID 31576). As someone who has a fondness for plant parts, it was interesting to see this used as a structural element in the carriage but of course can be used as a more sinister species of flora. Black joins four other colours of this element. 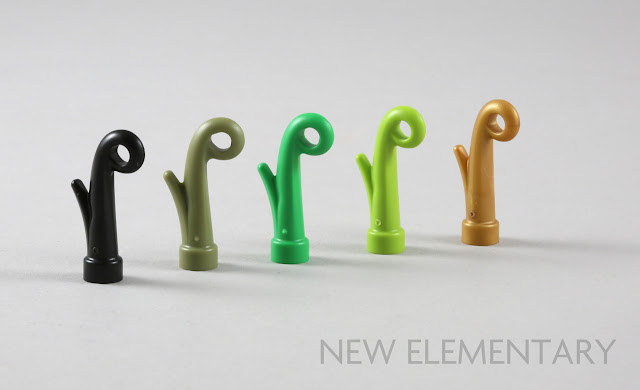 Bow Bottom 2X8X2 Ø4.85 comes in Dark Stone Grey in two sets (70654 Dieselnaut and 76081 The Milano vs The Abilisk) and Medium Stone Grey (in 75188 Resistance Bomber) but is provided here in Reddish Brown (Element ID 6222970 | Design ID 28919). Some readers in the EU may already have this piece in Reddish Brown as it appeared in certain countries in another summer release prior to the Wizarding World theme, namely 41157 Rapunzel's Travelling Caravan. 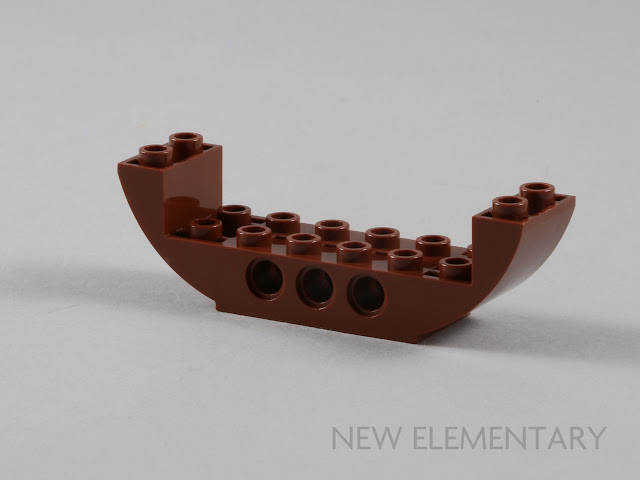 Moving on to Newt’s Case, there are quite a few new colours to enjoy. Especially since some are in Reddish Brown, a commonly used colour ... although perhaps not as aesthetically pleasing when placed next to Bright Reddish Violet [TLG]/ Magenta [BL]. 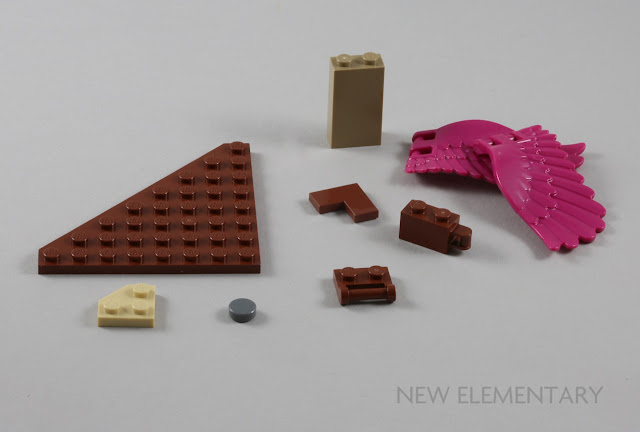 The four Reddish Brown elements pictured above are:
The latter joins five other colours of this relatively new element. There’s one missing from my pretty line-up photo - do you know which? 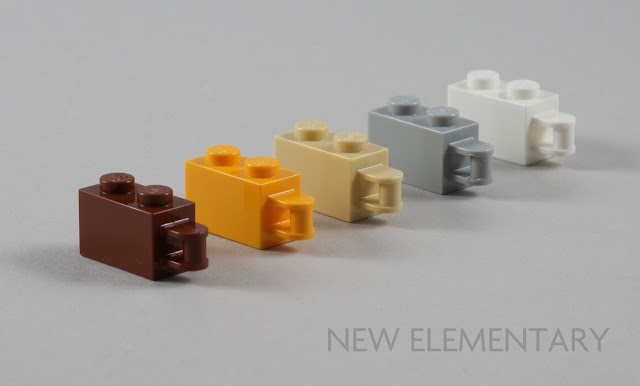 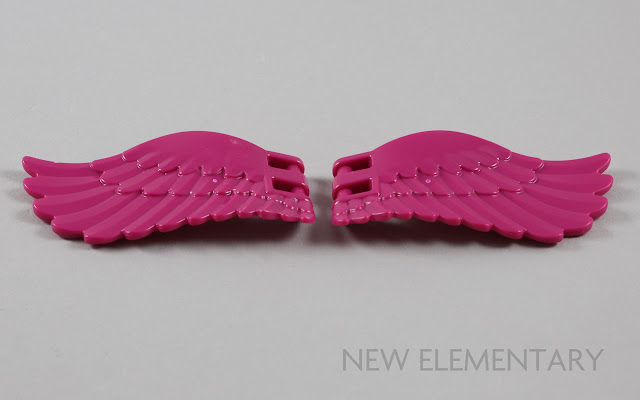 These vibrant wings belong to Occamy and look particularly nice when used with her contrasting Dark Azure body colour. 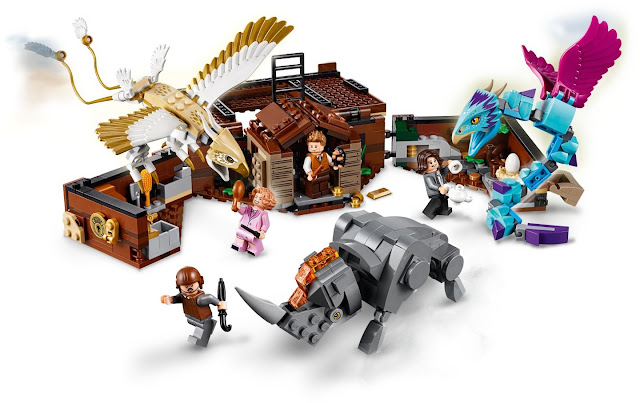 Image ©  The LEGO Group 2018
Next we have one of those elements that I was convinced was already in my collection and out in the wild! It turns out that Dark Stone Grey Flat Tile 1X1, Round (Element ID 6222416 | Design ID 98138) has not appeared in any previous sets. There is also a printed version with an eye. 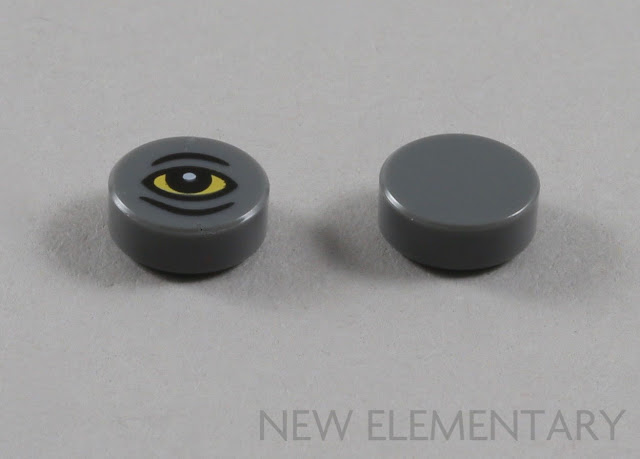 Finally, seen at the top of the picture below, we have Warm Gold [TLG] / Pearl Gold [BL] Whip (Element ID 6239754 | Design ID 2488) which joins the Dark Green, Black, Metallic Silver, Earth Orange and Reddish Brown entries in the whip department. 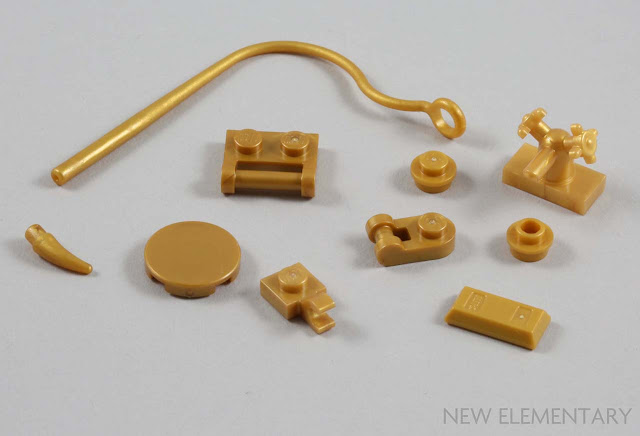 Also pictured are the little treasure trove of nine other Warm Gold elements in this set, for those that may be considering purchasing it as a parts pack. 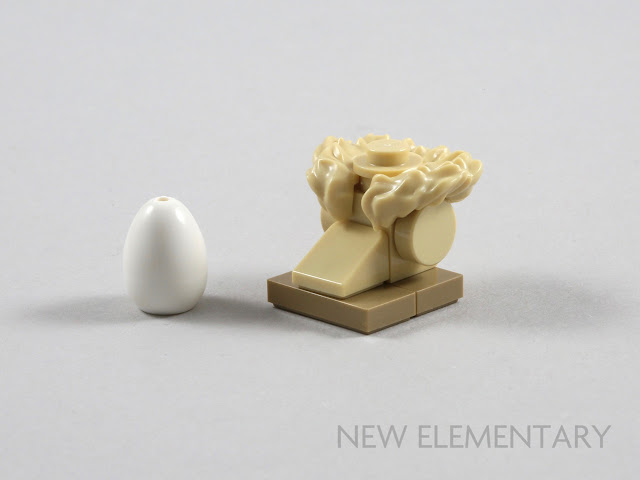 The piece has appeared in one other set, 76057 Spider-Man: Web Warriors Ultimate Bridge Battle from 2016, when it was Kraven the Hunter’s fur collar. In this set, the fur collar becomes a cosy nest for the Occamy egg; it looks perfect! 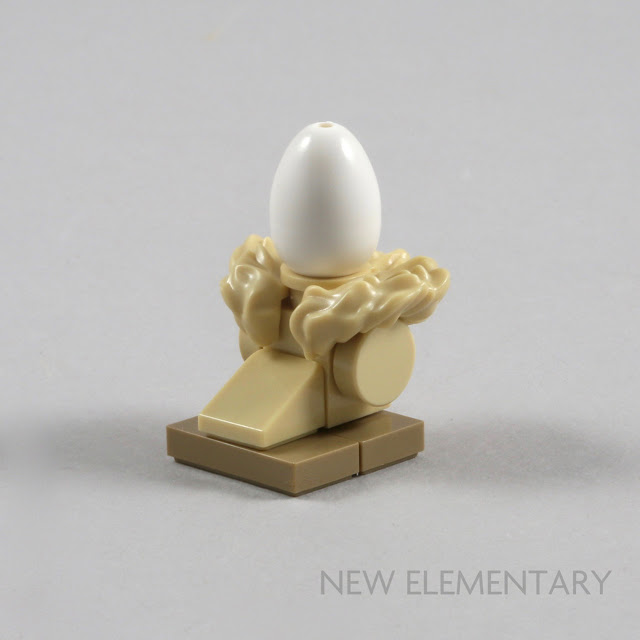 All of these new elements can be found in 75951 Grindelwald’s Escape and 75952 Newt's Case of Magical Creatures.


READ MORE: What you can do with the new wand piece from Harry Potter
Posted by: Admin Posted on 10/02/2018 02:38:00 pm
Email ThisBlogThis!Share to TwitterShare to FacebookShare to Pinterest
Labels: Castle, Harry Potter, Set review