When the new roller coaster tracks were first introduced last autumn, I think we all knew TLG hadn’t made six new elements purely for the Joker Manor. It was just a matter of time before we saw the first ever official roller coaster set. 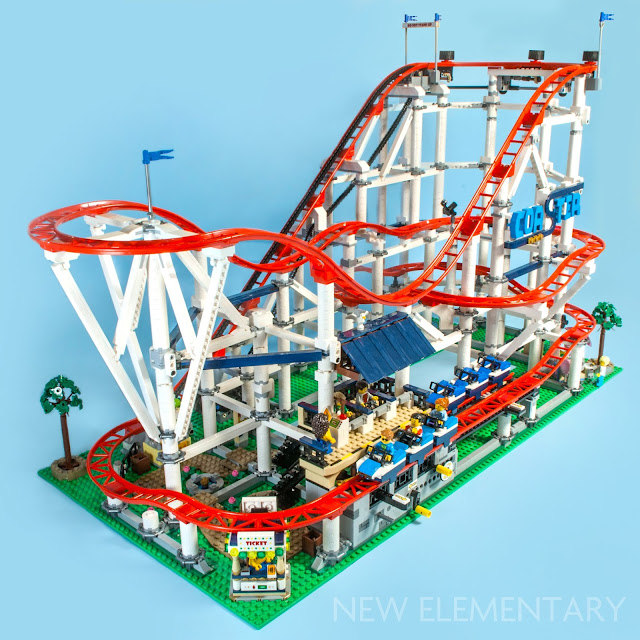 Even with specialized track and car elements, the 10261 Roller Coaster is a feat of mathematical LEGO engineering. All that geometry serving both structural and aesthetic functions had to be legal, which looks simpler than it actually is.  In terms of overall dimensions, I think this is the largest LEGO set ever. Besides, it is a sort of milestone in the LEGO System.

If I were to design a large metal scaffolding construction, such as a roller coaster, my first instinct would be to grab the bin with LEGO Technic beams. They are easy to connect at odd angles and have several times more connecting power than any System brick. Since this is a Creator Expert set, it is safe to assume that having most of the construction built in Technic wouldn’t fit the theme, despite the Technic design team’s efforts to convert Creator Expert designer Mike Psiaki to their “superior” building system (as our friends at Zusammengebaut discovered).

It is hard to believe the Technic department wasn’t involved, at least as advisors, but as far as the construction holding the rails goes, it is built in Creator-friendly System brick.

However, there is more to the white pillars than meets the eye. A fortunate functionality of the centre axle hole in the 2x2 Round brick must be its most efficient use in this piece’s 40-year existence.  A whopping 530 of them are used in the set as vertical beams for the rails which would likely collapse without the indispensable help of Technic axles securing them through the core.  The only part where Technic beams are used is to bridge between short segments of the pillars where modified plates without the functionality of axle holes had to be sandwiched in. 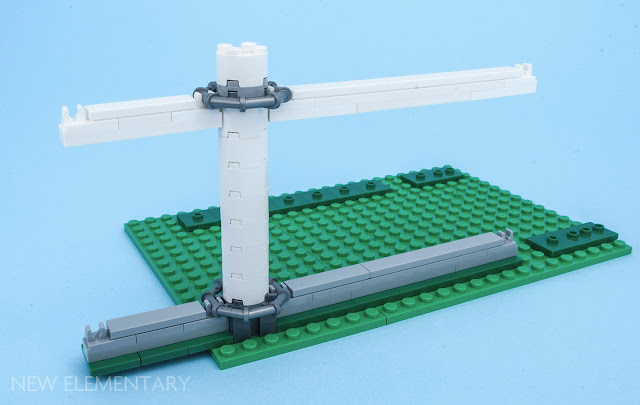 Securing all these pillars to the ground requires an equally ingenious method. A frame surrounds the foundation holding down the pillars with clips, making the “parabolic ring” (Element ID 6020990 | Design ID 75937) with its octagonal bar connections one of the most copious elements in the set. 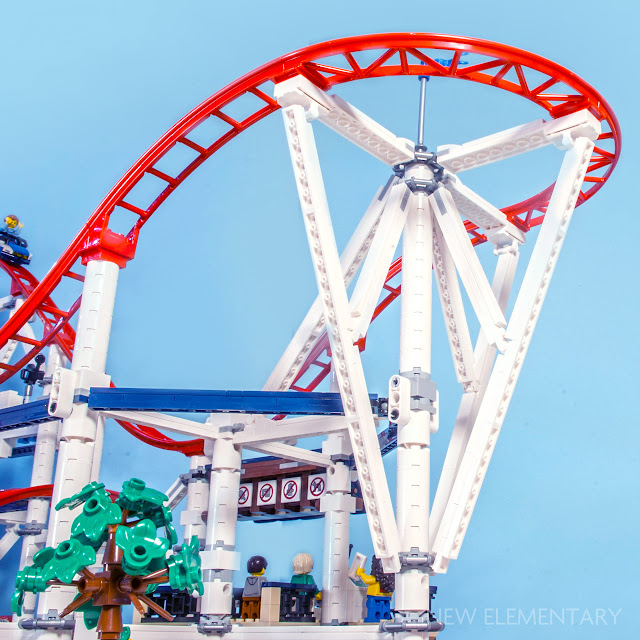 The use of the Technic rubber connector (Design ID 45590) as a tension spring to get a satisfying rocker-switch feel when pushing the lever is a stroke of genius and a kind of subtle detail that adds shine to the overall play experience. Exploiting the ornamental design of the “Ninjago fence” (32932) to support the lever shouldn’t go unnoticed either.

Another unexpected and clever solution is the ratcheting freewheel mechanism for one of the cranks. In layman’s terms, it is a system that allows a gear to rotate or apply torque in only one direction, like the rear gear on a bicycle.  I find it unnecessary for the function in this set, but its pure simplicity is enchanting nonetheless.

To get the conspicuous rail elements out of the way: there are now seven individual segments of rail elements available and, so far, the complete range is only available in Bright Red [TLG] / Red [BL]. Neither of the other two colours (Medium Lilac [TLG] / Dark Purple [BL] and Medium Stone Grey [TLG] / Light Bluish Gray [BL]) can complete the full length of track in this set, with the short steep segment of rail (Design ID 62561) exclusive to this set.

The complete track of the roller coaster is made up of these parts, which are now available in the colours indicated:

It is a useful substitute for the cult “R-slope” element (6091) (a nickname passionately advocated by AFOL Simon Liu) when the distance between them has to be less than two studs. This comes at the price of having a single connection point which affects the structural integrity of the builds.  Even though I would rather have a 1x1 version of this, every new piece in the curved slope category is welcome. 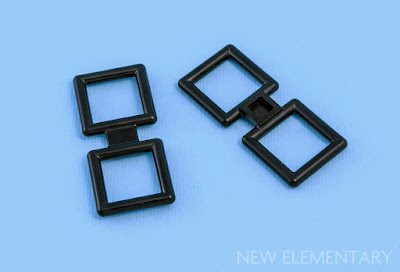 Although Chris McVeigh has already introduced New Elementary readers to the Brickheadz glasses, I will still sneakily categorize this piece as new.  The Roller Coaster comes with just the rectangular version, Bar 2.25 x 5.25 Double Squares (Element ID 6208551|Design ID 35366) which is suitably used as a fence. For a minute I was worried that this was a Brickheadz exclusive piece, even if I couldn’t yet find any revolutionary function for it apart from adding character to the brick interpretation of yourself. 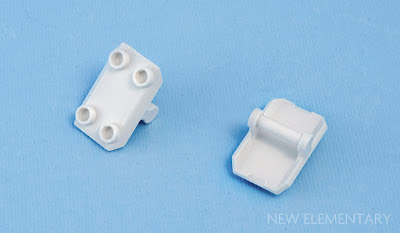 A piece that was introduced in 2017 in the 75192 UCS Millennium Falcon has passed slightly under the radar. It’s not until it made an appearance here as a functional part that it caught my attention. This is perhaps because BrickLink calls it a minifigure shield (6188400|30166) which is an easy category to overlook.

The piece is used as a bar connection support directly under a plate which, despite its rather large dimensions, is the type of piece I can see myself reaching for whenever strange geometry is required. 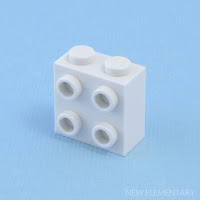 The set comes with an exciting recolour in White of the Brick, Modified 1 x 2 x 1 2/3 with Studs on 1 Side (6218823|22885) but, as if to tease us on purpose, there is only a single piece in the set. If it is any consolation, it is used for a function in the set that is not essential in this colour which almost certainly means it is coming soon in other sets. 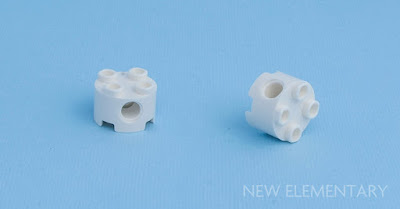 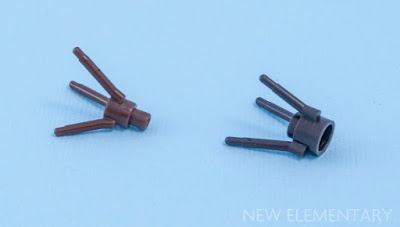 Just as the old flower stem element (Design ID 3741) seems to be going out of production after 40 years and becoming available in Dark Brown in its last days of existence in 70620 Ninjago City, the updated mould which exchanges the anti-stud for a bar on the bottom is now available in the next best thing: Reddish Brown.

Some of these plant elements are made of a softer plastic which is known for weaker clutch power. A bar makes a stronger connection than an anti-stud. An added incentive for changing some of the plant moulds might also have something to do with the new sustainable plant-based plastics which are planned to be used first on those softer plant elements. 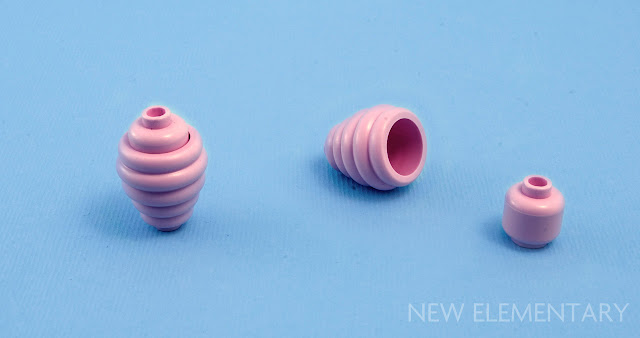 It is funny how some LEGO elements are stuck with the name for what they were first used. What BrickLink calls a beehive, and TLG’s bizarre naming habits designated a “Mini Hat”, is now available in Light Purple [TLG]/ Bright Pink [BL] (Element ID 6229124 | Design ID 35574). This set cleverly recycles the piece as fairy floss, more commonly known as cotton candy.   It is a four-piece build and after you insert a minifigure head – which is also new to Light Purple (6229124|3626) – the “Mini Hat” name suddenly makes more sense. It is likely a technical function of the beehive piece to accept a minifigure head element rather than to function as a possible fashion accessory in future sets. 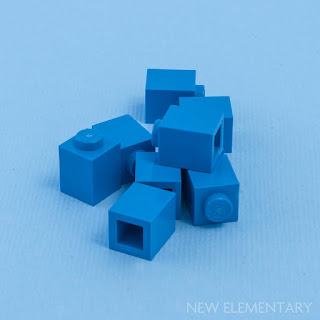 Dark Azure is a colour that has matured very quickly in recent years. Starting its life in 2011 in the Alien Conquest theme, it spread throughout all LEGO themes and has become a widely accepted member of the palette. Sometimes it just so happens that a certain colour has gaps in the very essential elements available, and for Dark Azure this was the ubiquitous 1x1 brick. Thanks to the “Coaster” lettering in this set, we can now close this frustrating gap (6225538|3005). 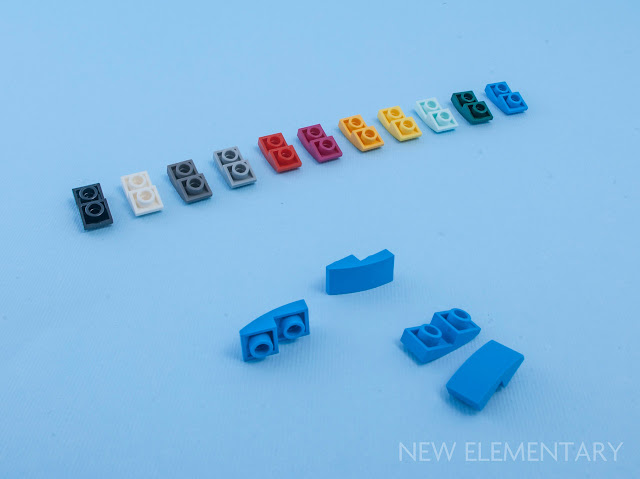 Another happy addition to the Dark Azure lineup is the “inverted baby bow”, Slope, Curved 2 x 1 Inverted (6231942|24201). Here’s hope that the inverted versions get as many recolours as their non-inverted counterpart.

Earth Blue [TLG] / Dark Blue [BL] is used as an accent colour in the fairground sub-theme of Creator Expert, so some recolours in this department are no surprise. 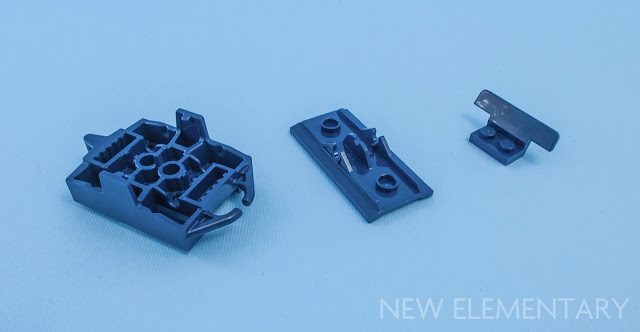 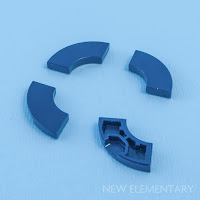 The set uses no new printed pieces. Most of the stickers are set-specific. The juice bar and cotton candy tiles might come useful some day. 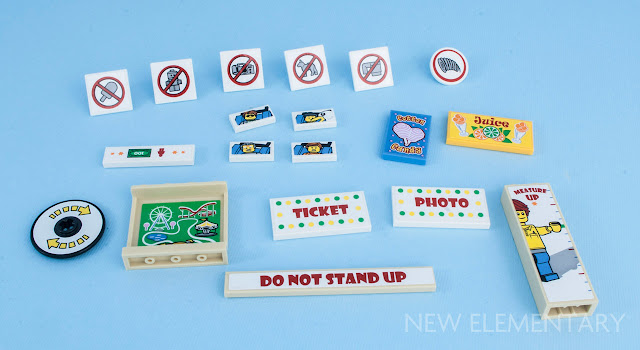 With the resources needed to develop a brand-new track and car system for the Roller Coaster, TLG must have pinned a lot of hope in it. The LEGO City Miners sub-theme came at an appropriate time, making use of the rails, and I am eager to see what other new ideas they come up with to exploit the elements.

The old narrow rail system introduced by the Indiana Jones theme is still used in the Friends 41130 Amusement Park Roller Coaster. But with its limited range of only two individual track elements per colour, it doesn’t seem to be going far in terms either of further development or ride excitement. 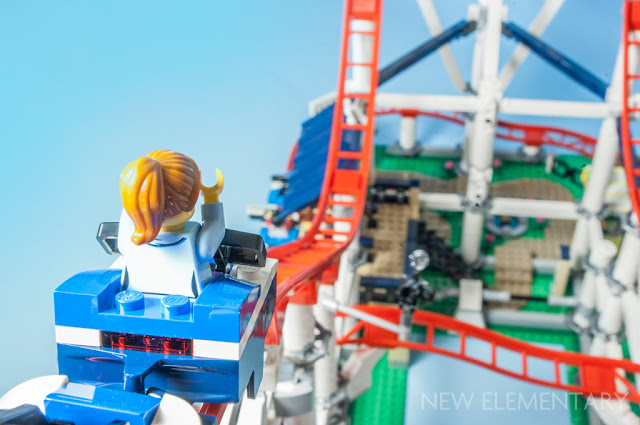 It is a good time to be a LEGO fan with three iconic fairground rides available at the same time.  I can’t wait to see the humongous reinterpretations of these rides in upcoming AFOL conventions. Suspended railway, anyone?

READ MORE: See the new and recoloured parts to be found in the new LEGO Star Wars sets

Or even better: help our fundraiser! If you enjoy what we do and can spare the cash, how about giving us what you feel we are worth? The price of an app, a book, maybe an annual magazine subscription? It would really help us bring you even more great articles.


Products mentioned in this post were kindly supplied by the LEGO Group. All content represents the opinions of New Elementary authors and not the LEGO Group. All text and images are © New Elementary unless otherwise attributed.
Posted by: Admin Posted on 5/31/2018 05:34:00 am
Email ThisBlogThis!Share to TwitterShare to FacebookShare to Pinterest
Labels: Creator Expert, Most popular, Set review, Technic