AFOLs from all over the world took part in our first ever live parts festival in June in Portugal at the Paredes de Coura (PdC) Fan Weekend. Each day, 15 builders had just over an hour to explore what might be done with a range of new LEGO® parts. See the parts selection here, but today let's look at what the second round of LEGO fans came up with. 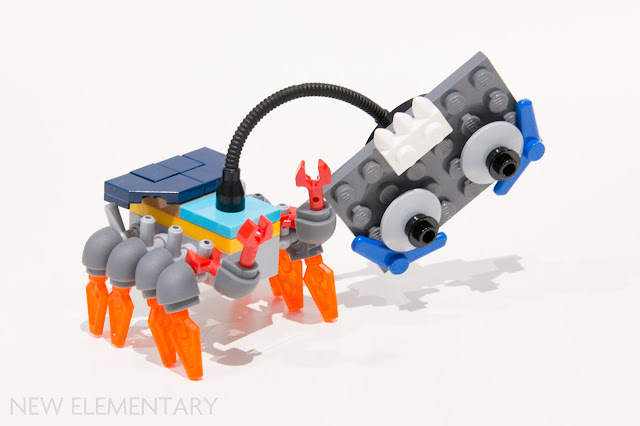 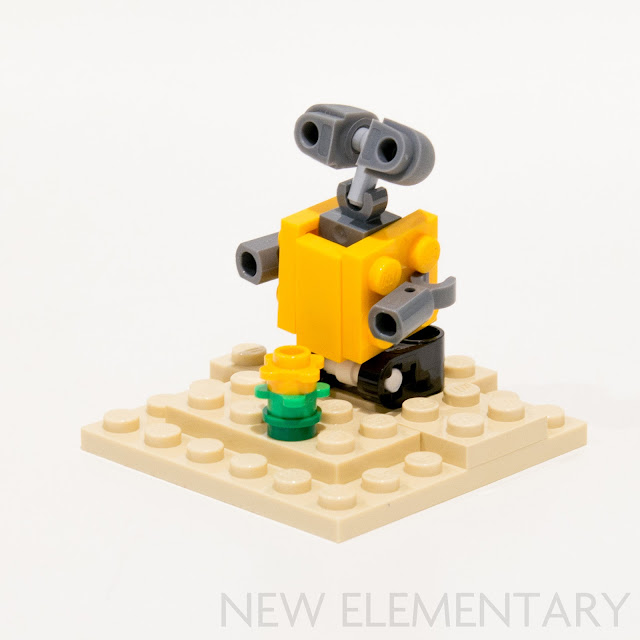 The shoulder pieces now become WALL-E's eyes! His body is attached to his 'wheels' below by using lipstick (6189137 | 25866 ). One, whcih you can just see, is inserted into the Black Technic beam and another vertically into his body. The bendy nature of lipstick allowed Markus to wedge the vertical lipstick into the tight gap below. This is the kind of dodgy move you'd never see a real LEGO Designer use. 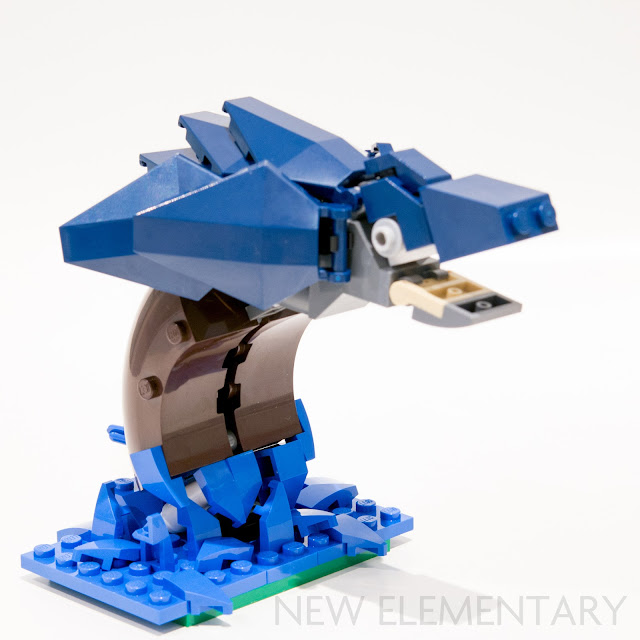 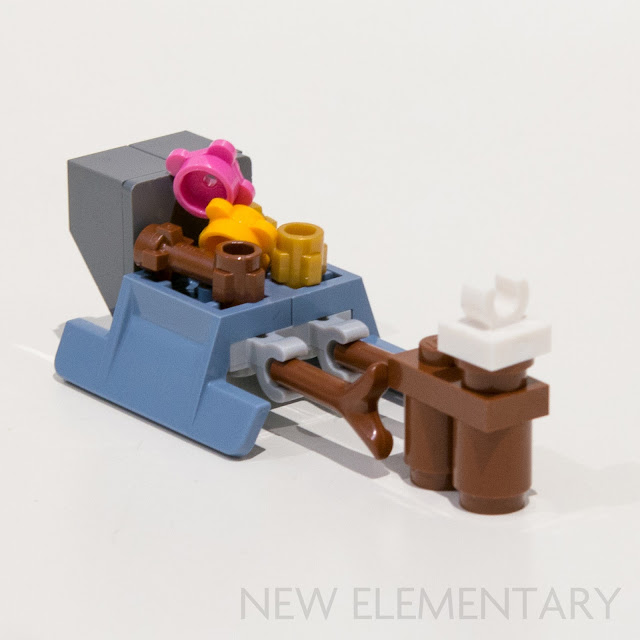 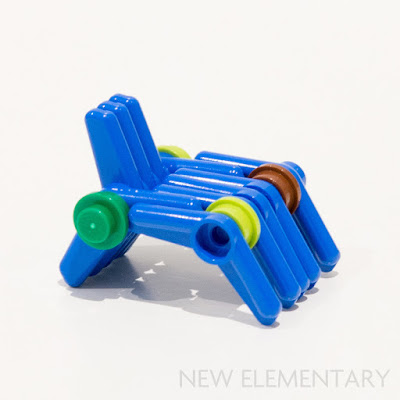 Some original use of the new Boomerang (6153574 | 25892) went on here! This sun lounger comprises two sections which are actually unconnected - the left and right sections just clasp together delicately by virtue of the boomerangs intersecting. 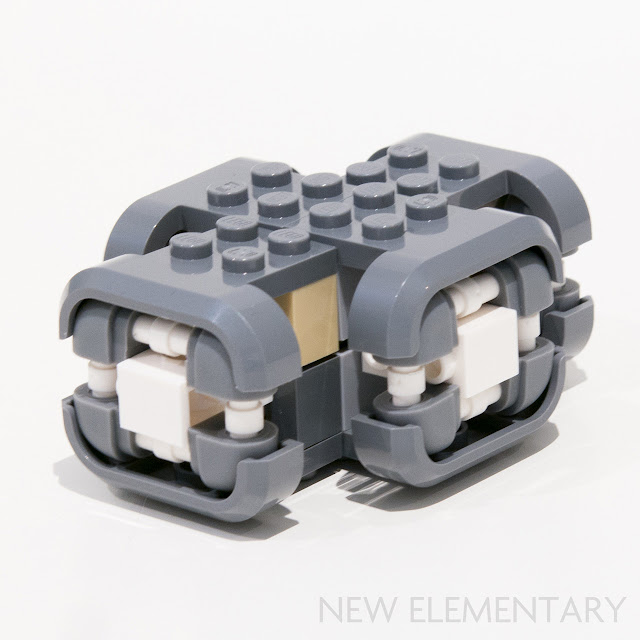 Several builders took the combination of lipstick and Nexo-bot shoulders as their starting point and the results led Inge to wrap them with Mudguard 3X4, W/ Plate, No. 1 (6178912 | 28326), since the curves were so similar. A great core for something spacey. 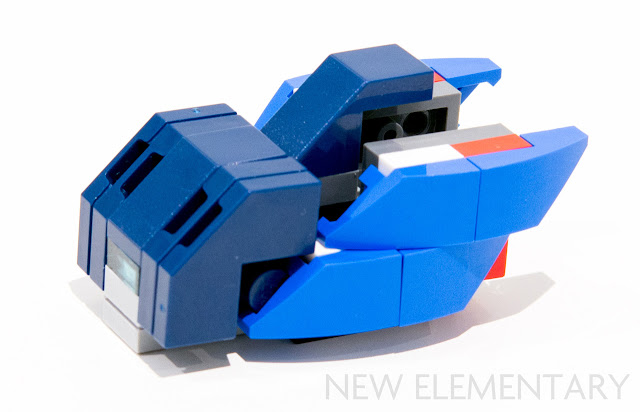 The front of this mini dropship uses SNOT technique to match up the 45° angles of three new parts, all in Earth Blue [TLG]/Dark Blue [BL]:
The sides have an interesting diagonal effect where David has staggered baby wedge bows, which would look even more effective on a larger ship. 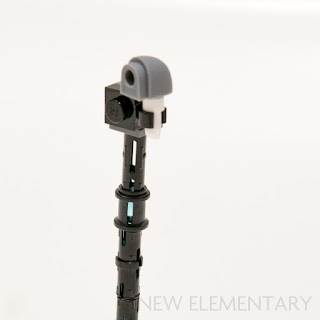 An inspired usage of the Nexo-bot shoulder here; a speed camera! See if you can spot it in this magnificent street scene David created. (Click to enlarge) 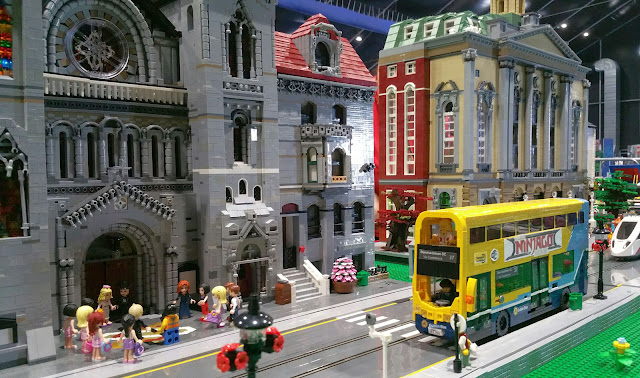 This tablescrap needs further investigation but you can see the idea; use the baby wedge bows to create a circle. David intends to create many rings out of these to make an interesting tower. 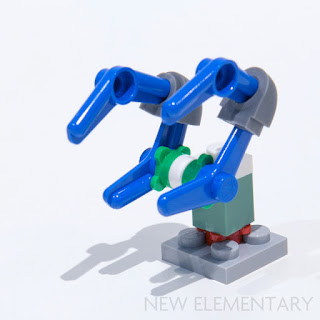 David thought of factory equipment when he built this tablescrap, but I'm just thinking "The Claw!!" Note how cruelly he's treated the Nexo-bot shoulders, jamming the boomerangs into their 3.18mm holes. 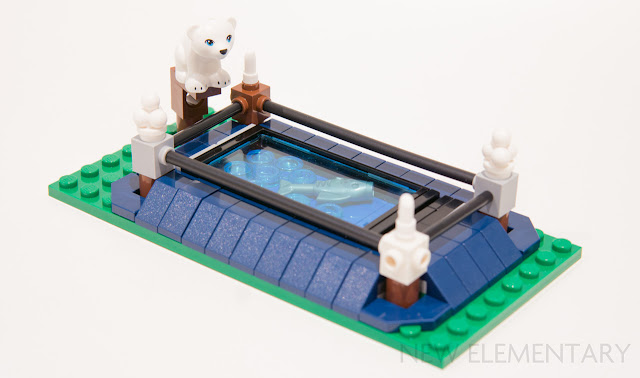 The lack of a stud on the top of anti-slippers permitted Francesco to place bars close to the top of them. I also like the way corner wedge tiles are used to fill in the corners instead of corner wedge bricks, permitting space for other pieces to be included. 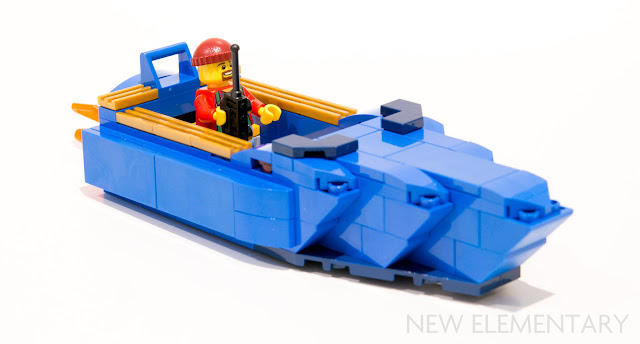 The baby wedge bows help shape the bow of Steven's boat while his use of spears suggest this is a high-powered vehicle! 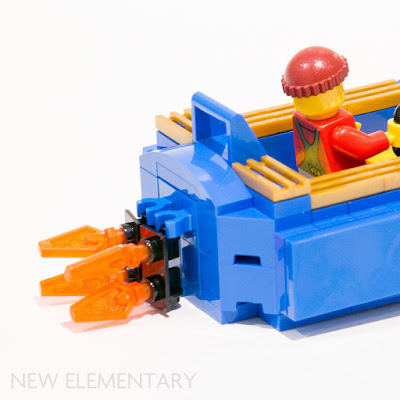 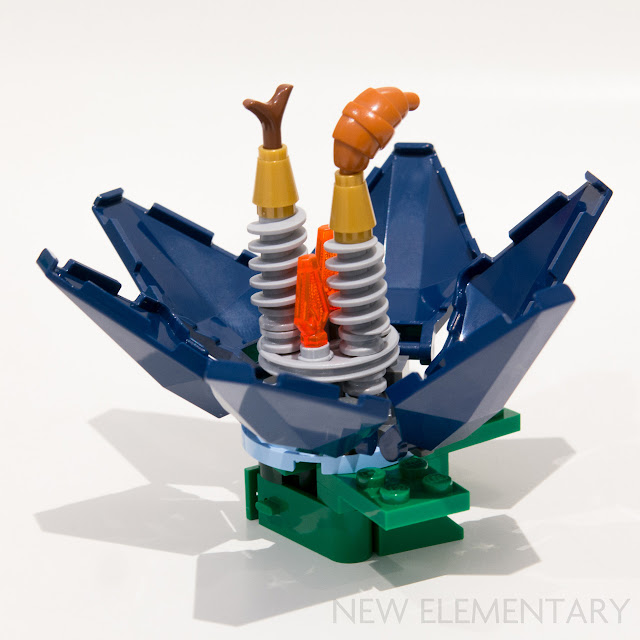 Several builders over the three days were inspired to use the windscreen from Nexo Knights as petals. Eduard's has six petals rather than four and its strange stamen will certainly be attractive to bees, and French people.

Mudguards become air intakes on Christophe's sleek neo Classic-esque ship, leading nicely to a body made of anti-slippers, then contasted with the angle of the spoilers. 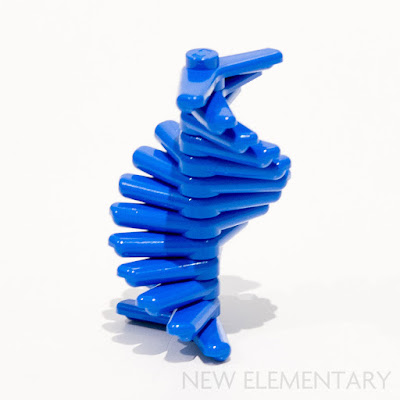 Blighted by the Portuguese sun, Sophie didn't much feel like building but turned out a neat pile of boomerangs that reminded her of DNA. This would make an excellent spiral staircase. 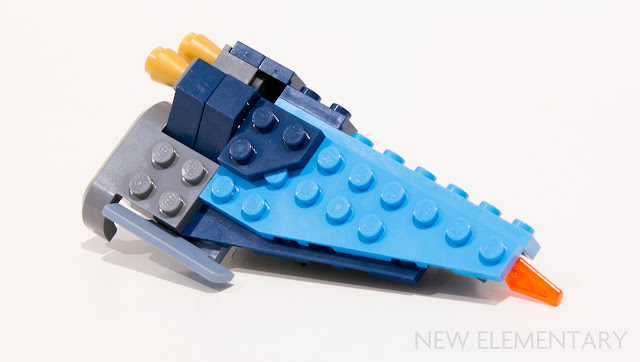 A lot of seed parts in a compact, sleek model! The 2x2 wedge plate is used as a decorative element in Wilfried's spaceship while the mudguards become rear exhaust guards. Note the use of the spoiler and the spear too. 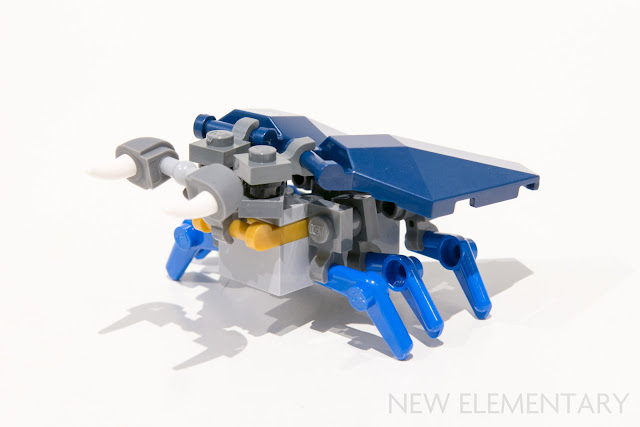 The other seed parts are used in Wifried's second model, an insectoid with boomerang legs and windscreen wings! 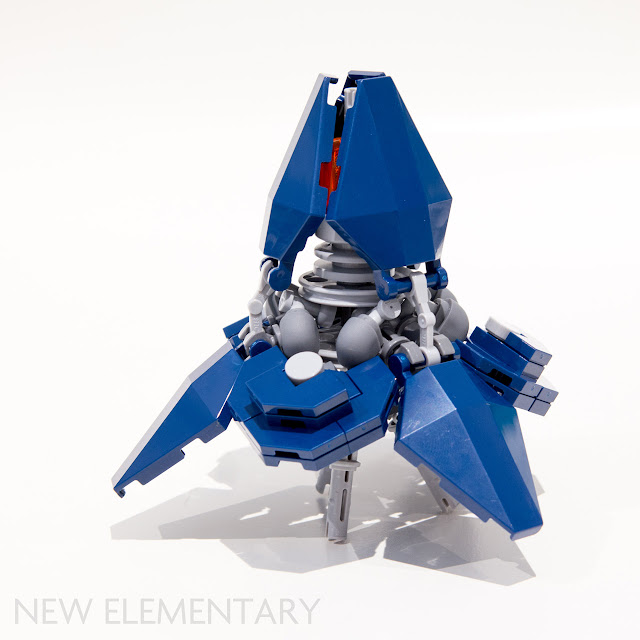 Those 'windscreen petals' return but this time in a triangular arrangement, creating some sort of spaceship or perhaps landing module. Note the offset corner wedge tiles creating an interesting pattern. This model opens up... 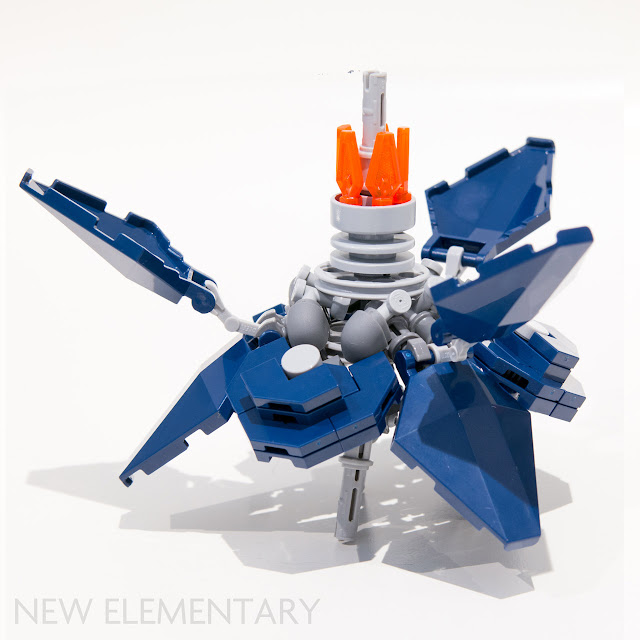 ...revealing the original idea that started the model: to place the spear pieces inside the rim of the wheel.

Products mentioned in this post were kindly supplied by the LEGO® Group. All content represents the opinions of New Elementary authors and not the LEGO Group.
Admin: Tim Johnson Posted on 10/11/2017 06:42:00 am
Email ThisBlogThis!Share to TwitterShare to FacebookShare to Pinterest
Labels: Community, Event, Parts workshop, Technique