Happy Boxing Day everyone! To keep your eyes entertained as you recover on the sofa, Elspeth De Montes (AzureBrick) has a festive review for you from the LEGO® Creator Expert Winter Village theme.

'Tis the season to build LEGO, tra-la-la-la-fah-la-la-la. With the nights now drawn in and the festivities upon us, what better time to review the politically-correctly named 10254 Winter Holiday Train priced at £69.99/US$99.99/89.99 with 734 pieces. The set is rated 12+ and is part of the LEGO Creator Expert line but it is actually a very straightforward build with no new techniques or difficult build portions. I can say this with some authority as I followed the retail description: “Gather the family for some festive LEGO building fun with this charming model…” and built this with my only 12+ family member, my very novice LEGO building partner.

This set is part of the ‘Winter Village’ theme that are released in time for Christmas the winter holiday period. This theme includes seven other wintery, festive sets:
Also, back in 2006, TLG released 10173 Holiday Train. This was also a winter holiday-themed train in green and red with a wagon of presents and Christmas trees as well as the passenger carriage. It cost £49.99 and was a larger set at 793 pieces which resulted in two more cars, although it did not come with any track. Since retirement, this set has become rather costly to find in new condition (about £500).

The box comes with bags numbered 1 to 3 and oddly the instructions are split into 2 booklets. The smaller, thinner booklet is for the minifigures, micro-build toys, presents, boarding platform bench and lamppost, while the other larger instruction booklet is for the train. I did wonder if this was to give the younger builders something to keep them occupied while the over-enthusiastic parents could build the main model…maybe I am a little too cynical. 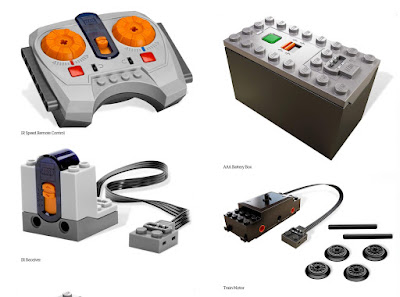 The set is not supplied with Power Functions but within the instructions there is a portion for installing them, making this into a powered RC train. This would require supplementary sets 8879 IR Speed Remote Control, 8884 IR Receiver, 88000 AAA Battery Box and 88002 Train Motor; which you can buy separately costing around £46.

Alternatively purchasing a PF-enabled set like LEGO City 60051 High-Speed Passenger Train (RRP £99.99 but often reduced by 20-30% on sites such as Amazon) is an option as it has all the parts required.

Also within the box are 16 sections of curved track, which allows a circular track of about 65cm diameter to be built. I imagine that those who want to set this up as part of a larger Winter Village display will want more track and in particular some straight track but for the purposes of pushing the train around manually then this allows a good reach. 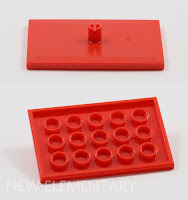 Bright Red [TLG]/Red [BL) Bogie Plate 4x6 (Element ID 6148786 | Design ID 18626)
The red Bogie Plate 4x6 has been previously seen in both Bright Yellow [TLG]/Yellow [BL] (five sets including 60051 High-Speed Passenger Train, mentioned above) and Black (10233 Horizon Express). The bogie plate is visible in the completed model as it sits within the engine, so it is good to see that effort was made with the colour, one is supplied with the set.

And that’s it for new elements. Should we all go home now? Well, maybe I can interest you further in some other parts in this set…

I thought I would also mention a couple of other elements that are worth highlighting due to being semi-exclusive to this set.

White Limb Element, Small (Element ID 6135500 | Design ID 2423)
Eight are supplied with this set and form the seasonal decorations on the outside of the tender and guard’s van. At present the only other set with these white small limb elements is 41068 Arendelle Castle Celebration, which has four. The White limbs are worth highlighting as the element is commonly used for making trees and I can imagine these being used for winter scenes. Perhaps using the White ones could be considered an efficient way to add snow to a tree.

Bright Red 3 Train Wheel Ø30 M+U Flange (Element ID 4584104 | Design ID 85489)
These lovely train engine wheels are another good aesthetic colour choice for the Winter Holiday train with one set of the three wheels supplied. The alternative, black, would have been far less effective with the green, gold and red colour theme of this set. These red wheels are actually found in a retired set from 2010, 7597 Western Train Chase, which has two. 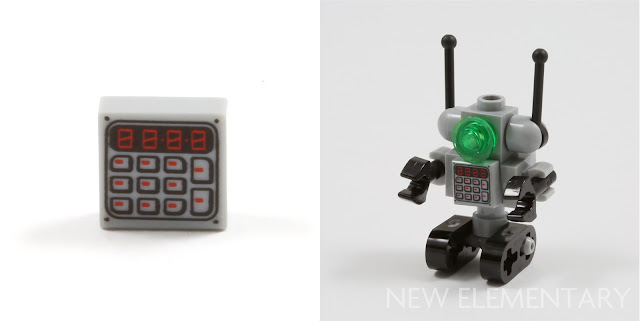 This little keypad is quite cool and I have a few of these printed tiles in my collection that I was considering using for coded entry security doors, a safe keypad, maybe part of a console or a biolab with a fridge that had Level 4 viruses inside… I haven’t actually used them yet but I’m sure I will.


All that glitters is Warm Gold [TLG]/Pearl Gold [BL]

Thanks to the colour scheme in this set, there is a plethora of Warm Gold parts supplied: 11 different elements with a combined part count of 79 (not counting spares).

Being a New Elementary review, I am not going to describe every step of the build in this set, there are plenty of other reviews that do this but I did build the set, play with it and ponder over it a fair bit. What I will say now is that my favourite parts of this set are built in Instruction booklet 1 - the little toys! 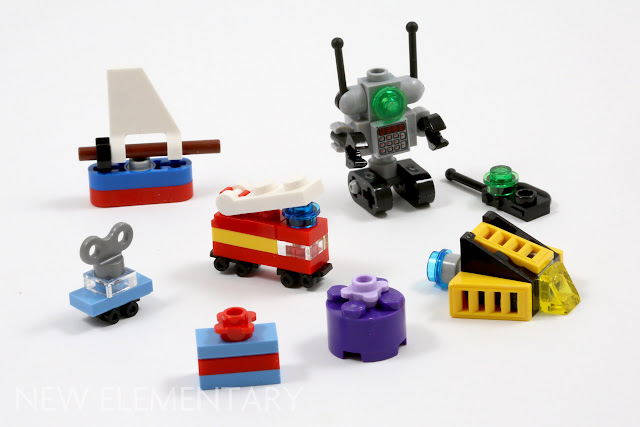 The selection of micro toys are adorable and very clever, especially the fire engine and the tiny clockwork car. I hardly ever see roller-skates actually used as minifigure roller-skates any more!
So, as mentioned, booklet 1 covers the accoutrements in this set, including most of the minifigures. Here we have the train driver/engineer, the train guard, girl, boy and granny. 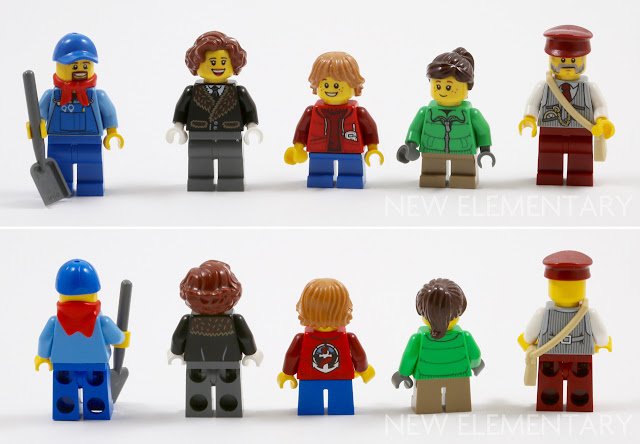 Poor granny gets to sit on the rather austere platform bench in the freezing cold waiting for her grandchildren to arrive. Fear not, the kind LEGO designer has appropriated Penguin’s torso with its fur-collared jacket with white gloves to keep her cosy. Black Mini Upper Part No. 2488 (Element ID 6055298 | Design ID 76382) from set 76010 Batman The Penguin Face off. 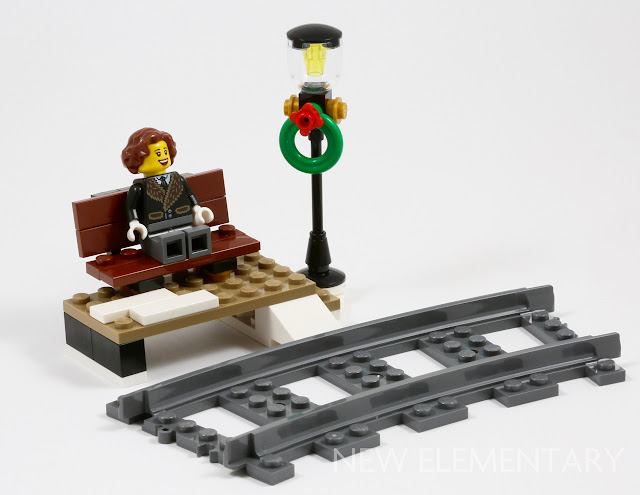 We begin with the engine, a straightforward build that starts with the rear portion of the engine and then onto the front ‘drive’ portion with the bogey allowing movement between the two. 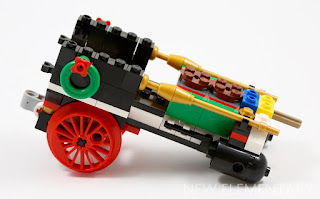 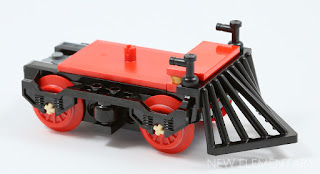 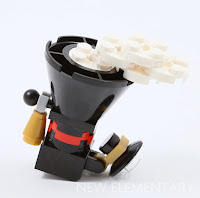 The best part of the engine is the funnel with steam coming out of the top and the light at the front. Clever use of the Medium Stone Grey Stick Ø 3.2 w. Holder (Element ID 4542590 | Design ID 48729) means that the upside down cone is unable to slide upwards despite not being held in place with any clutch. I thought it might be fun to replace the White 2x2 round plates with lots of ice cream parts for a real steamy effect. 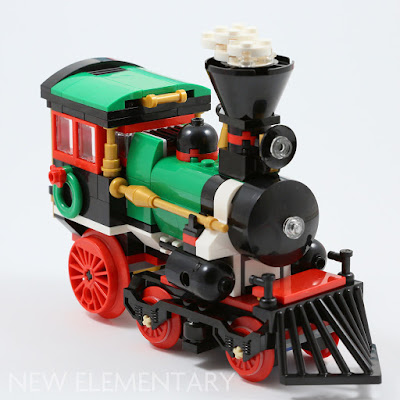 The final result includes the ‘cockpit’ area where the driver can be placed and some decorative Winter Holiday wreaths on the side of the engine. It is clear that those red train wheels were definitely worth using again as without these, the engine would not look as good.

It does have the appearance of a toy engine for taking children around in rather than a huge steam engine for delivering children to their granny who lives in the Winter Village up in the mountains. 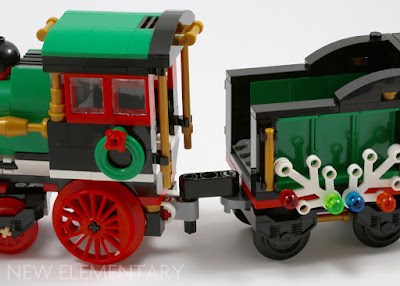 The coal tender sits behind the engine, connected via a secure but rather retro-looking Technic-axle-goes-into-hole connection. The tender is the first instance of the White limb elements and coloured decorations being used and they also appear on the guard's van - how cheery. There are about four pieces of black coal left in the tender so I really hope it is not far until granny’s austere bench appears on the horizon or she could be in for a long wait and a chilly bottom. 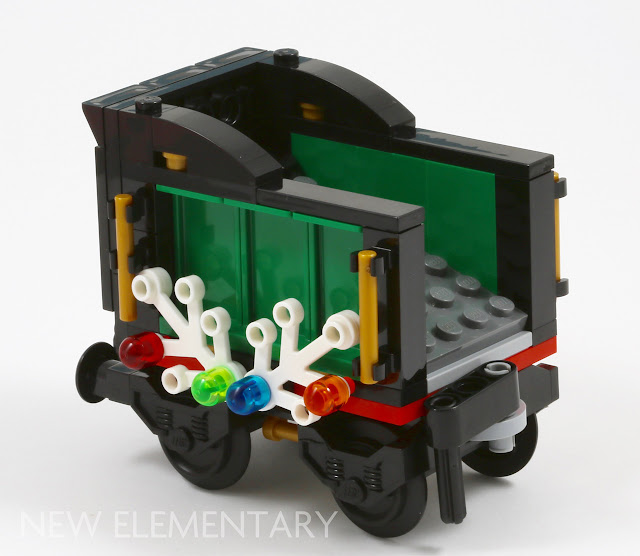 Next we move on to the flatbed wagon. Half of this is a compact fenced-off area to either fit some toys safely or all the toys with the risk of arriving with one of two on the ground somewhere along the journey. The other half is a rather clever Holiday Tree (yes it really is, rather than a Christmas tree) with micro-train that revolves as the train moves along the track. 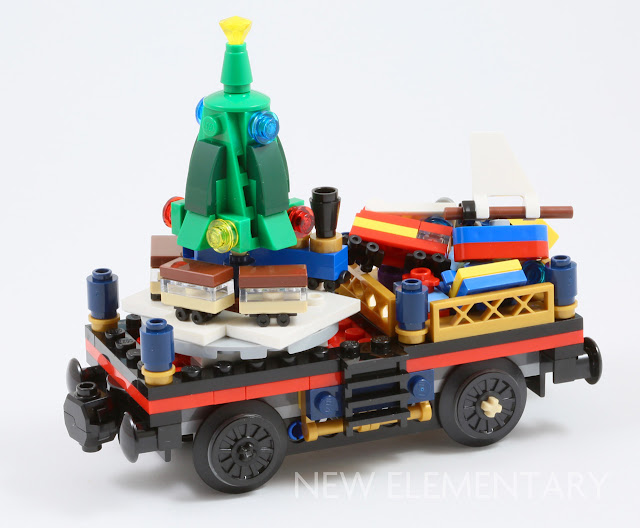 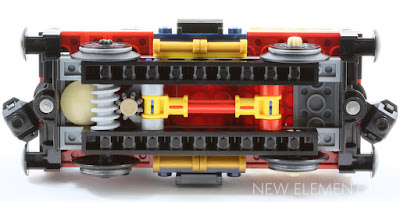 The revolving mechanism is actually very simple. I mean this is a compliment as simple means effective and functional in the LEGO world. A worm gear is placed on the wheel’s axle and this rotates a smaller gear to which the Christmas tree is attached, thus rotating as the carriage moves.

A microscale train sits on the round plate at the base of the tree. In summary, a LEGO train goes round resulting in a microscope LEGO train going round - genius! The designer video gives a great demonstration of the rotating tree in action.

Did anyone else notice that there is no covering on the flatbed wagon’s wheels? It looks a bit odd since the engine, guard's van and tender all use the Black Motorbogie, Ornament (Element ID 4493326 | Design ID 2871). Perhaps there is a ‘drag’ issue or something else in the train physics department that I am not aware of. 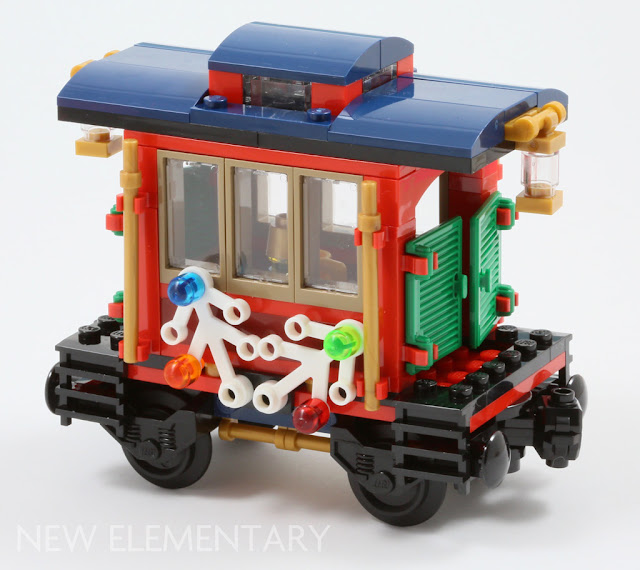 Finally we have the caboose/guard's van depending on whether you prefer the American English or the Proper UK English name. Again this is a straightforward 'add one piece to the next' build which results in a somewhat gypsy-caravan-saloon-looking guard’s van. 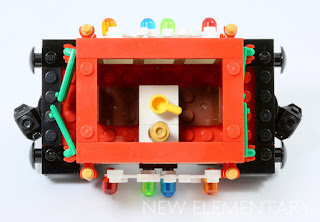 The roof comes off to allow those with nimble fingers to place minifigures into the two seats across the table, which spans the centre of the interior. The little lamp is cute and uses the Warm Gold Fez (Element ID 6006217 | Design ID 48729) as the lampshade. There’s not much else in here thankfully, there is not really any more space! Apparently this is where the two children travel, if you watch the designer video.

The 16 curved tracks are fitted together to make the circular track, the tender has its retro-connection to the engine whilst the rest of the connections use Black Train Buffer 2 (Element ID 6125770 | Design ID 91994) and click together with majestic magnetism. Voila…that is the Winter Holiday Train complete.

I mentioned adding Power Functions; sadly I need 88002 Train Motor but it’s on back order at LEGO.com so I can’t power my train yet, apart from giving it a push by hand. In a way this is better as it feels more like a toy train than a fast intercontinental winter express!

I am still concerned about the lack of coal in the tender, but have realised that the spares could come in useful… 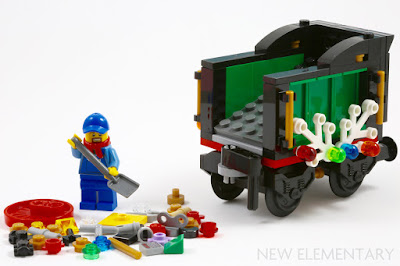