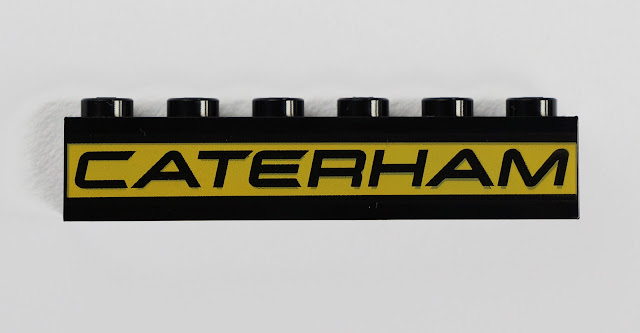 Today we have an extensive review of the parts that come in LEGO® Ideas 21307 Caterham Seven 620R, peppered with comments from the designer of the original concept, Carl Greatrix. I could not be happier for Carl, who is a top bloke and a remarkable builder. He’s also fun at parties.

Speaking of which, here he is at the launch party at Caterham last Thursday. Carl is on the right, revealing the final model along with the LEGO designer that amended his original, Henrik Andersen. Being revealed on the left is an actual Caterham Seven in the same livery as the LEGO version. Life imitates art!

I’m no car buff, in fact I hate them but I like pretty things, and even I know of the Caterham Seven thanks to the credit sequence from The Prisoner. It is released on 1 October and at 771 pieces this LEGO version is the largest Ideas set to date, just trumping 21305 Maze by two pieces! (Okay, let’s call it a draw.) It costs a bit more though, £69.99 / US$79.99 / €79,99, and if it is not immediately obvious to you why that would be, read on.

If you are simply looking for a review of the build and the finished set, you won’t find that here… having analysed the parts, photographed them, interviewed Carl and written 2000 words about all of that, I’ve actually run out of time to build the set itself! No-one is unhappier about this than me.


“No new parts have been made for my set,” Carl points out, because indeed new moulds are never allowed for LEGO Ideas sets. But Carl really struck it lucky. “It has some new parts from future sets that have not yet been seen… these parts were already in production for these other sets. The interesting thing is though, at the time when I first saw the LEGO designer's ‘almost final’ version, a lot of the new parts had not yet been shown in new sets. So we were hoping that these new sets would be launched by the time my Caterham came out, as otherwise we would have to replace them with other parts. At least, thats what I was told when I was there.” 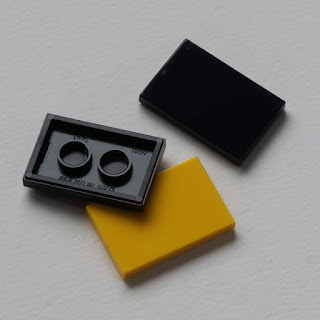 Well thank goodness they were, because the new parts are awesome. Sure, they are not the same parts that Carl used in his original submission, but as he points out, “if I'd known these were coming out, I would have instantly used them where the LEGO designer has.” So, what are they?

Well first up - yippee! 2x3 tiles join the LEGO family with a Design ID of 26603. You get four Black (Element ID 6162892) and two Bright Yellow [TLG]/Yellow [BL] (6179184). The appearance of this part was not a complete surprise; I first became aware of it when Chris McVeigh spotted it in the images of the upcoming new theme, LEGO BrickHeadz, revealed at San Diego Comic Con. 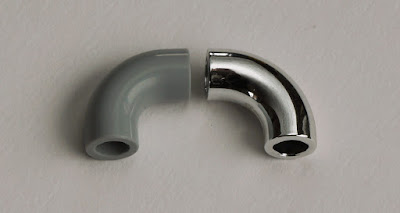 It’s back! The new part, to the left, is a redesign of the old one to the right: “Brick, Round 1 x 1 90 Degree Elbow - No Stud” (Design ID 71075), which was used in twelve sets between 1995 and 2008. I don’t know the TLG or BL name for this new version yet either, but Carl sensibly calls it a macaroni tube (as opposed to macaroni bricks I guess). It even comes in two colours in this set: there are two in Black (Element ID 6179182) and five in Medium Stone Grey/Light Bluish Gray [BL] (6151349). It is a lot of fun to make shapes with, especially once you start adding 2L pin connectors as well.
{EDIT: Scott Barnick has pointed out that the new macaroni tube has already appeared in a summer set! The Design ID is 25214 and TLG call it Design Shape W/ Tube, Crosshole. It is Titanium Metallic [TLG]/Pearl Dark Gray [BL] and appears in Ninjago 70589 Rock Roader (Element ID 6156875)} 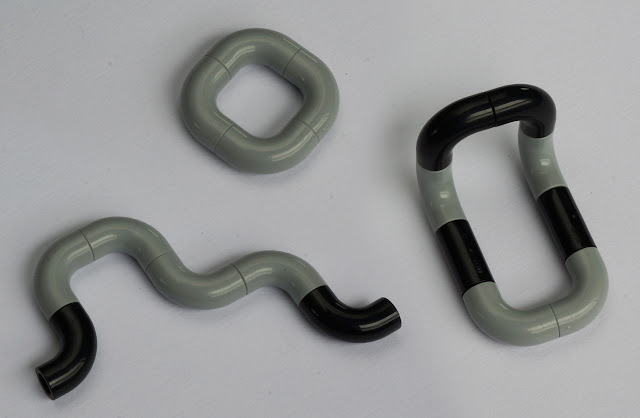 I’ve previously been told that the old version was pulled because its design made it too tempting to connect illegally. What am I going on about? Well, the connection points at either end were only intended to take a stud (hence BL categorising it within the round brick family), but it is easy for anyone to imagine that it should take a Technic pin, especially given its similarity to the 2L Technic pin connector. However there is not enough space inside to receive a Technic pin as the curve begins almost immediately, and forcing it will crush your pin. The LEGO Group do not like connections that ‘stress the elements’; well this connection was bound to send Technic pins to the point of nervous breakdown. This connection confusion even made its way into a LEGO product, albeit not a mainstream one: an Audi TT roadster released at LEGOLAND Deutschland in 2002. 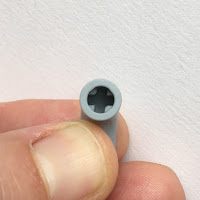 This new version has been tweaked to have longer straight sections and a smaller curve. The connection point still takes a stud but also now an axle; perhaps they chose an axle over a Technic pin so that connections between two of these parts could be firmly fixed at 90 degree angles. As with other parts that can take an axle, you can also use any 3.18 connector (like a lightsaber)… in fact, this set actually uses Friends lipstick at one point! Yup, your Caterham Seven 620R comes with lipstick.

This fascinating part has already appeared in three other sets, all Ninjago, and so far only in Black (Element ID 6157554 | Design ID 26047). TLG call it Plate 1X1 Round W/3.2 Shaft, BL call it Plate, Modified 1 x 1 Rounded with Handle. I will not discuss it further today because you’re going to be seeing a lot more about it on New Elementary over the coming weeks… 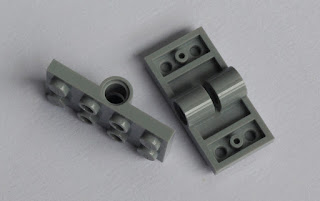 I think I will call this new part the see-saw! It is an extended 2x4 version of the existing piece known on BL as Plate, Modified 2 x 2 with Pin Holes (Design ID 2817). The studs on the extended ends are regular ‘LEGO’ studs, not recessed, which is a shame as having eight recessed studs on a plate would have been useful. However the LEGO Group are not keen on having studs without their brand embossed on them, unless it is necessary. The new version is Medium Stone Grey (6176242 | 26599) and you get two in this set.


“I'm extremely happy that there have been many colour changes of some VERY useful parts,” Carl told me. “Trying to get some recoloured parts or rare / expensive parts into the set was quite important to me, from a fan viewpoint. I tried to push for the Technic half-bush (being used to secure the wheels on) to be used in black, as these are extremely rare! They are, I'm afraid, off the list of being used in a production set though, so no matter how much I tried to push for them, ultimately that choice was out of my control and light grey ones are used in the set.” Indeed, you can spot them in this official image from the LEGO Group. 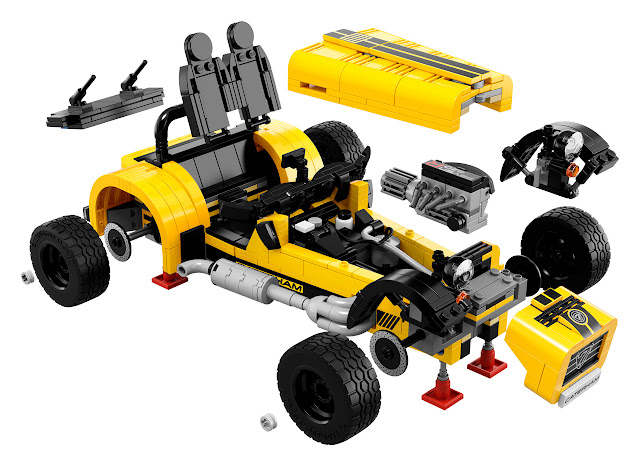 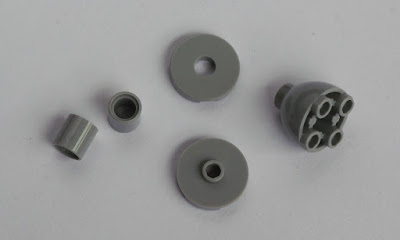 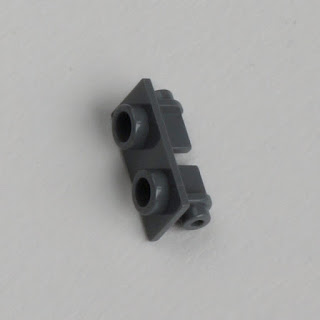 Which leads us nicely onto Dark Stone Grey recolours, and to what I feel is the most thrilling of all recolours in the set: the top section of a 1x2 hinge brick (6176400 | 3938). This has never appeared in this colour, nor in its predecessor Dark Grey. Given that the part has been around since 1979, that’s exciting. I suppose that given the part is usually almost completely hidden in official sets it was not high on TLG's priority list of recolours, but AFOLs certainly like to expose it fully, making the most of its unusual texture and illegal connection points. You get three in the set. 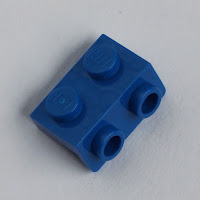 
There’s lots to discuss here, because there is no sticker sheet! The amusing thing there is that anyone who knows Carl and his models will know that he loves coating them in a multitude of carefully designed handmade stickers, so this is a delicious irony. Nevertheless, Carl is thrilled by these prints, and I think we all will be too. Just look at them! 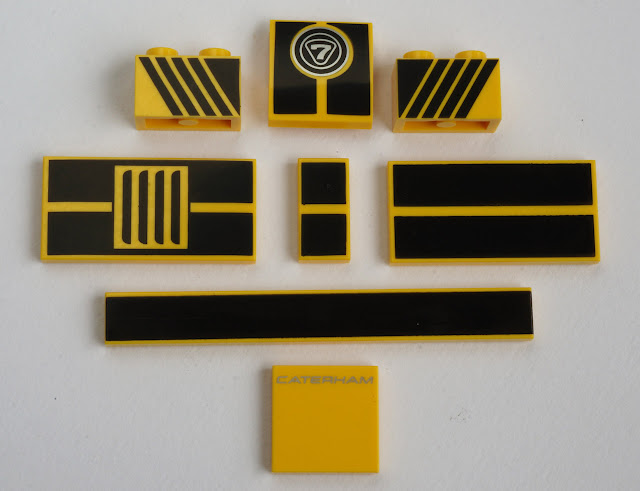 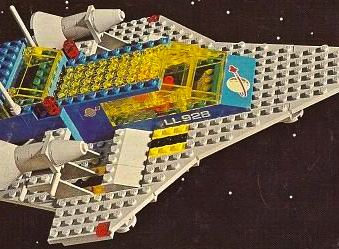 You know, Spacers are going to love this set. You may think I’m stretching things here, but the yellow printed parts could be used to make some very interesting bumblebee stripes for Neo-Classic spaceships. ‘Bumblebee stripes’ are a nickname for those three little lines that appeared on the wings of spaceships in the early waves of LEGO Space, representing some sort of hazard area presumably. If you are a hardcore Neo-Classic Spacer, you will always include these on your blue and grey ship designs (and only ships - never anything else) in the correct order of yellow, black and yellow. By this rule, Benny is actually not a Neo-Classic Space builder; proper bumblebees were sadly absent from his spaceship, spaceship, SPACESHIP! 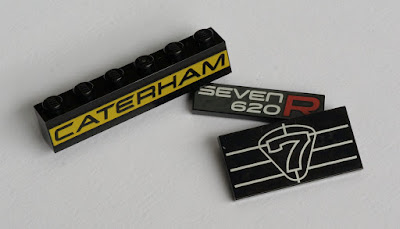 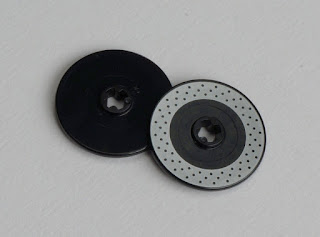 It’s incredible that they have bothered to print these 3x3 discs which represent the brake rotor discs (6191951). “They are not seen in the final model unless you take the wheels off,” Carl points out. You can see this clearly in the exploded view further up this post. “That’s testament to the detail they strived to keep in the model.” 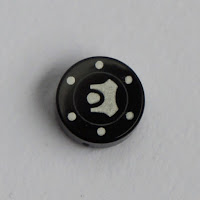 There’s also a Black 1x1 round tile with a print of a fuel filler cap (6181538). Could be useful in other applications as it is quite abstract. 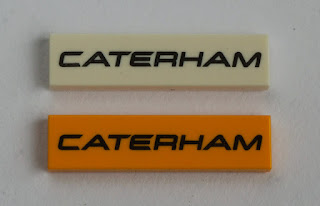 
As Carl pointed out earlier, some parts which are expensive on the aftermarket are in the set. “I'm over the moon about the yellow brick arch being used, this will really help cheapen the currently high BrickLink prices on them.” 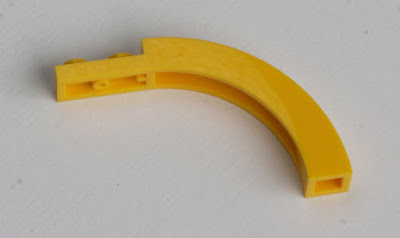 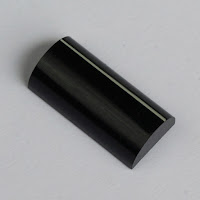 If you notice any more expensive elements now found in this set, shout out in the comments!


There are actually loads more interesting, nearly-new and cool parts in this set, so even without building it I can recommend it highly! For example, in Black there are corner tiles, 1x1 round tiles, inverted baby bows and the 3.18 holder with 3.18 handle which Elspeth discussed in the VW Beetle review. There’s a glow in the dark minifigure head too!

Since I can’t draw any conclusions about the build yet, except that it looks to be full of fascinating techniques, I will leave you with these official images and a final word from Carl... 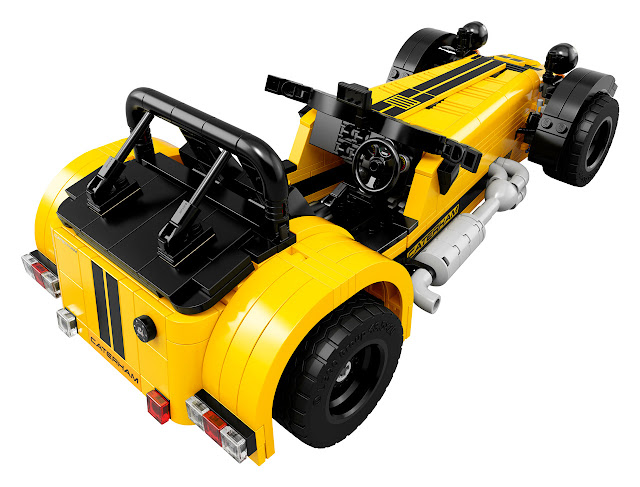 “Now that I've finally built the set, I'm impressed with some of the solutions used to solve small areas that were slightly stressing connections....such as the 2x2 round plate at the front underside of the bonnet stripes, that just sits on tiles. I'm also really happy that they kept the foot pedals in the model!” 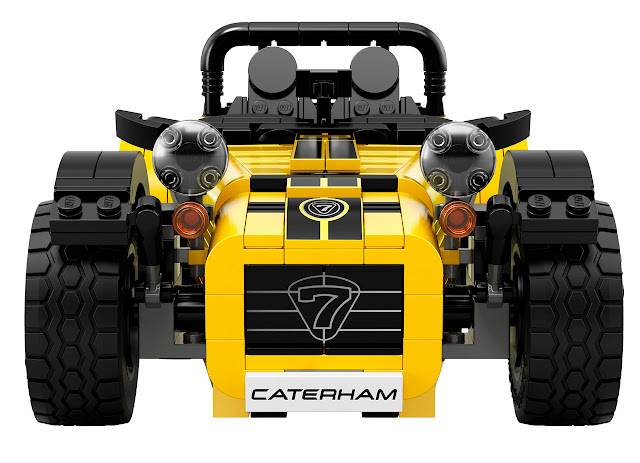