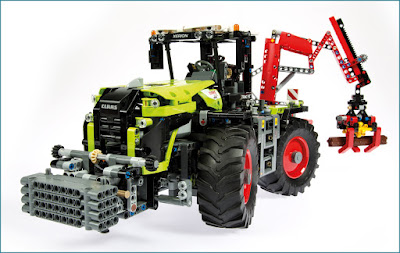 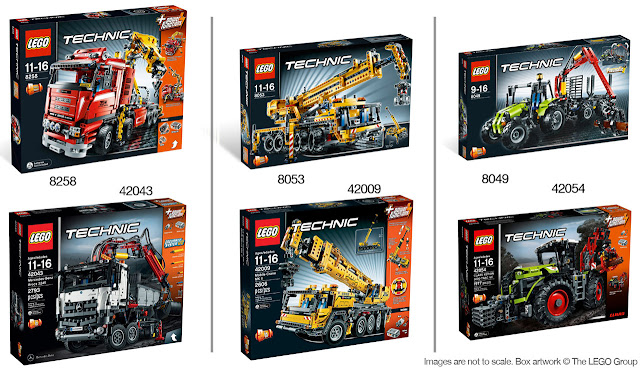 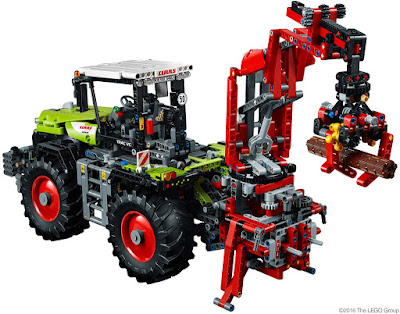 42054 Claas Xerion 5000 TRAC VC (Variable Cab) is currently the fifth-biggest Technic set available, at 1,977 parts, although with the monstrous 42055 Bucket Wheel Excavator looming large, it’ll soon be eclipsed along with most other Technic sets!

The box retains the same look and feel of Power Functions Technic sets released over the last ten years and weighs in at a shade under 2.9kg, although 700g of that is the single 340-page manual.


The box itself is pretty well stuffed with parts all of which come in 15 bags, labelled ‘1’ and ‘2’, split (mostly) between the tractor build and the extendible crane. As usual, TLG’s bagging criteria seems almost – but not quite – logical. By the time we hit step 20, pretty much all of the bags have been opened.

There’s not much here that seasoned Technics builders won’t have seen before. With just one medium motor and a battery box, it’s Power Functions-light, but it does come with a whole bunch of useful elements, including more than 60 gears, one small and two large turntables, a couple of small linear actuators, universal joints and gear shifters, plus numerous cross-axles in various colours. 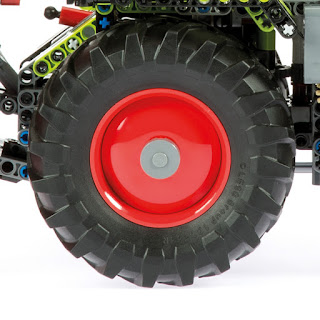 Of course, when TLG first demonstrated the Xerion 5000 back in January, the main thing that builders focussed on were the new wheels and tyres. The wheels are actually standard Technic Racing Mediums 56x34 in Bright Red [TLG]/Red [BL] (Element ID 6149984 | Design ID 15038), with curved hub caps covering the spokes. It’s the first time these 6x6 dishes have appeared in Red, with solid studs (6156534 | 44375); the hollow studs versions were only ever released in two sets back in 2003 and 2007.

However the tyres are a brand new part (6141782 | 23798). At 107mm across and 44mm deep with chunky treads, they’re ideal for gnarly off-roaders and other industrial-grade machinery, and will no doubt be making guest appearances on other builds before long. 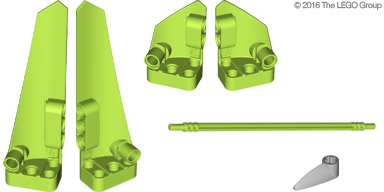 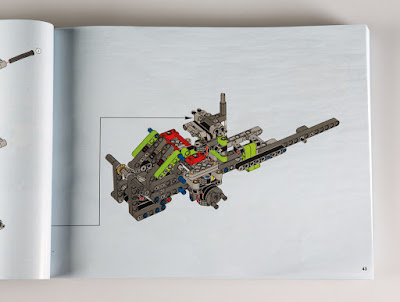 The build starts toward the back of the model, concentrating on the steering mechanism for the rear wheels. One of the key elements to be added is a couple of red cross axles with a bar that slides across, which is linked to the steering mode selector. This has three settings: four-wheel steering; front wheel steering; and crab steering.

The sliding bar simply changes the point at which the steering mechanism is applied to the rear wheels – so when it’s on the right they steer one way; when it’s on the left they steer the other; and when it's centred – with no real bias either way – they just go straight ahead. It’s both devilishly simple and fiendishly clever.

After fleshing out the chassis and adding the gears and gear shifters for the central steering mechanism, a second linear actuator is added at the front, along with the drive shaft that provides PTO (Power Take Off) at both ends of the vehicle. And at this point the sheer scale of the model becomes clear – this is going to be a whopper! 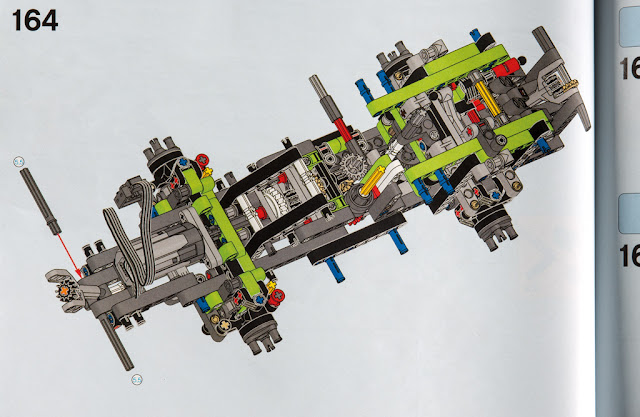 Things start to get exciting after all four wheel hubs are attached and the motor goes in. The next major milestone is the addition of the Z60 turntable that first appeared in last year’s Mercedes-Benz Arocs truck. 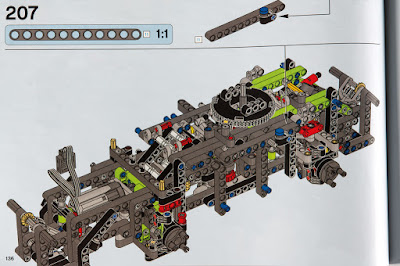 The tractor is now becoming a heavy old beast. The build is still pretty simple, thanks to a nicely printed manual that’s easy to follow, but you need to ensure things like gear shifters and switches are located in the right place and aligned properly. A lot of this complex gearing soon gets buried in the bulk of the chassis, so if something’s not quite right now, it’s a huge dismantling job to get it fixed later on!

Soon we hit another milestone with the addition of the battery box, which sits under the tractor’s bonnet. Its cabling is woven through the end beams to keep things tidy. It’s also connected to an external switch, which – thankfully – means you can turn it off and on without having to open the bonnet. This now enables us to test some of the operations, and make sure the gearing is all working as it should. 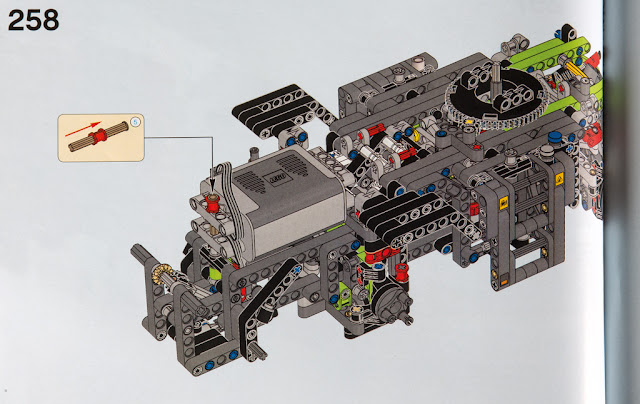 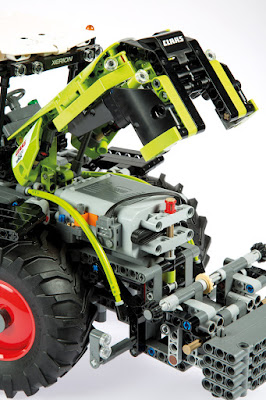 There’s plenty of nice attention to detail in the later stages, like the design of the engine cover, which uses a variety of Technic panels and angles, and even includes a little emblem (a Bionicle tooth) as well as a strut to keep the bonnet open when working with the battery box.

The tractor’s cabin is quick and easy, and after a few flourishes – such as a fire extinguisher – the giant red wheels go on. At this point it’s worth mentioning the sticker sheet, which at just 100mm x 120mm is small for a model this size, and features 31 stickers, including some very tiny and fiddly elements. The good news for sticker-haters is that you can leave them off and it doesn’t detract too much from the overall model.

Finally, it’s time for the bags labelled ‘2’, and a change of colour scheme. Despite feeling like an ancillary part of the model, the crane is actually a complex beast with a host of tight-knit gearing and some very fine tolerances. It’s also cleverly designed because it uses a single PTO from the rear of the tractor, but enables you to both rotate the crane and raise and lower the arms at the same time. 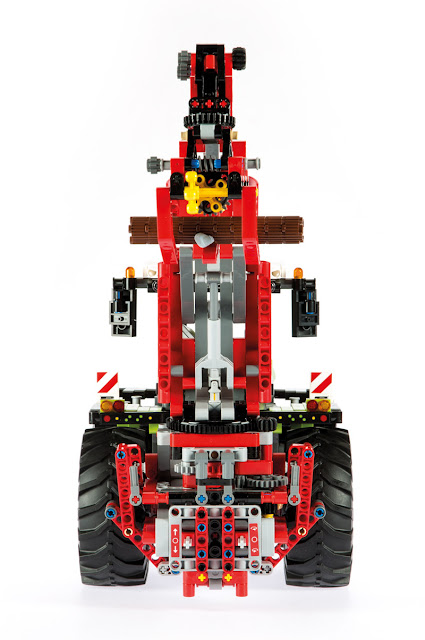 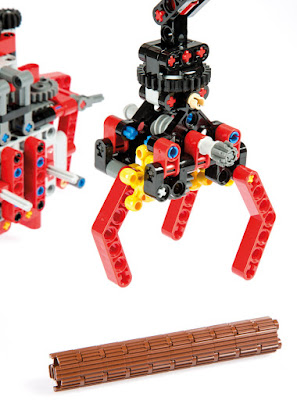 The grabber, which has a small manual gear operation using a worm screw, is attached to the crane arm, and the crane is then added to the tractor using a pair of twin-axle pegs. All that’s left is to build a log for our logging tractor to carry, and we're done!


TLG’s model of the Claas Xerion 5000 is simply excellent: big, bold and brash. It looks great, and from ten feet away you’d be hard pushed to tell it was made of LEGO pieces, so neat is the design. Visually it’s very close to the real vehicle, with the exception of the curved, gradually sloping bonnet, which is hard to achieve with the elements available. If anything, the wheels and tyres on the real vehicle look even bigger, but with a turning circle of around 56cm, the LEGO version can – to scale – actually out-steer its big brother.

Once the model is completed, the decision to not have it fully powered starts to make sense. The key engineering element of the model is the three steering modes, which would have been practically impossible to implement and have it driven as well (there’s barely a spare cubic centimetre of space inside the gear-filled chassis). Take away the ingenious steering element and you’d just have another radio-controlled Technic set. 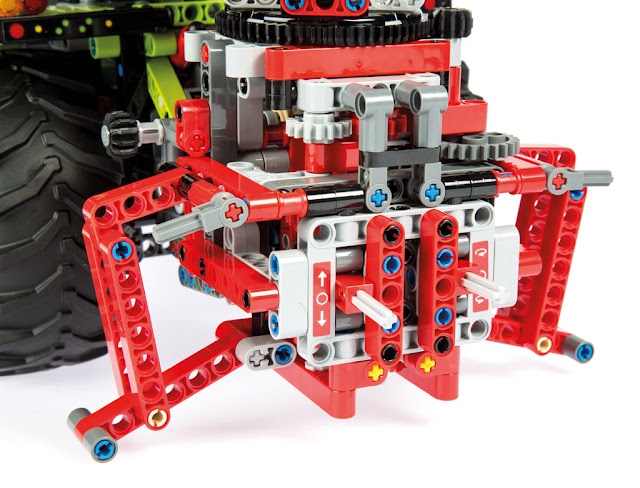 Despite its odd looks, the crane is surprisingly fun to use. A pair of manual outriggers ensures that it’s nice and sturdy, although the crane is not particularly powerful. The manual extension and claw reduce the overall effect slightly, but it’s hard to see how they could be motorised with the current range of PF elements. 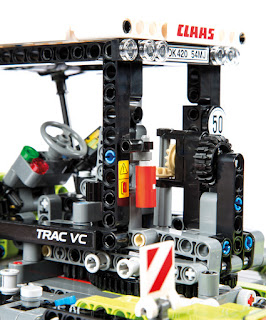 Naturally there are some downsides. The cabin – by dint of both function and accuracy – is rather flimsy and rattly, and wobbles about when the tractor is moved. However the rotation system – which raises and lowers the cab as it moves – is ingenious, as is the ‘hand-of-god’ steering mechanism, which rotates along with the cabin. The lime-green bonnet is rather loose fitting too, but this is less of an issue when driving the tractor around.

The ‘B’ model is more of a mod than a rebuild. It’s basically the tractor with a few crane parts used to create a silage plow, which is understandable but a bit disappointing, given the number of parts in the set.

Intriguingly, having PTO at both ends provides a great way for builders to extend the functionality of the model by creating their own implements and add-ons. (And, somewhat optimistically, it would enable TLG to produce Claas-branded accessory sets… if it so desired.) 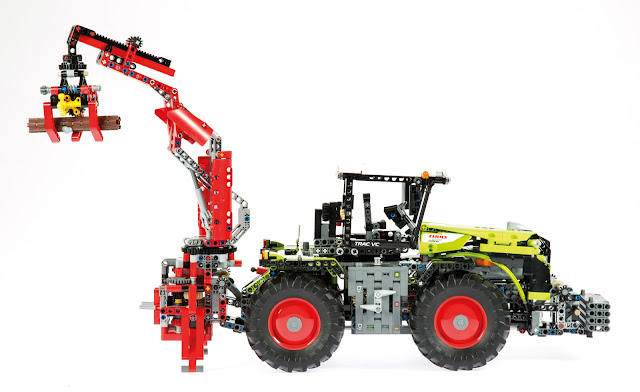 The PTOs are connected via universal adapters to the linkages, which can be manually raised and lowered, so implements don't need to be specific sizes/clearances. Also, because both linkages are the same, you can swap implements from front to back – although in this case, the crane is too bulky to be fitted up front.

Overall then, the Claas Xerion 5000 is a brilliant set. Despite a few niggling issues, it’s a very satisfying build and there’s something here to please everyone: it’s a great model to play with or just have on display; Technic fans get a huge array of parts to employ in their own models; and it sets a great challenge for modders to motorise and improve in different ways.

I was adamant that 42055 Bucket Wheel Excavator was going to be this year’s leading, must-have set. But if you can only afford one more Technic set this year, I think it has to be the Xerion tractor. It’s prettier, cleverer and almost definitely more fun.

So, in short: loads of parts, ingenious engineering, brilliant aesthetics and an engaging build – the LEGO Xerion 5000 is a Claas act.

This review was produced in association with Bricks magazine. Photography by Andrew Tipping except where noted. A different version of this review appears in the August 2016 issue number 15. Print and digital editions are available from republic66media.com.