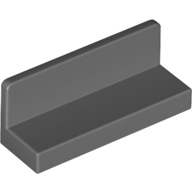 When new parts are introduced that are three studs long, eyebrows are sometimes raised in the fan community about their necessity. (The same usually goes for corner pieces, too.) Discussions would certainly always happen within the LEGO Group about whether a three-long part is genuinely warranted, and in this case I believe it certainly is because this part is not POOP... i.e. you can't make it out of a 1x2 panel and a 1x1 panel, because a 1x1 panel has a corner wall. Also you will be able to offset this part by a half-stud using the two pins on the underside (which, although I haven't seen one, it must surely have). 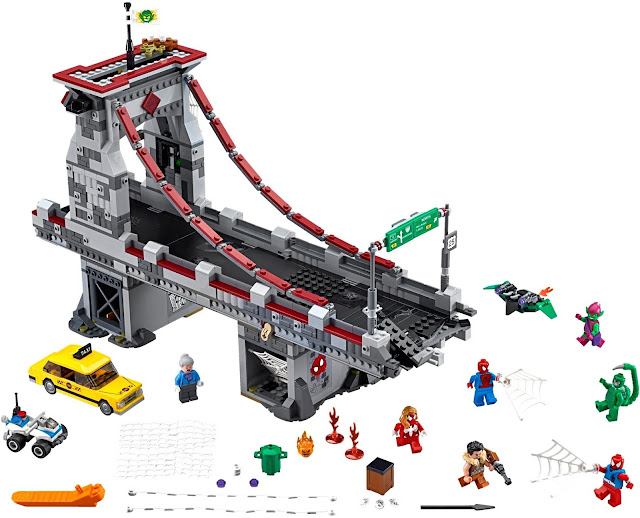 So far it only comes in one set, 76057 Spider-Man: Web Warriors Ultimate Bridge Battle, which I have at least had the pleasure of seeing, and I think is a very cool set. (This is coming from a man with little love for Super Heroes sets.) It's the biggest set that LEGO designer Justin Ramsden has yet worked on - he's the former LEGOLAND Windsor modelmaker who appeared in the Channel 4 LEGO documentary as he scored the job - and he's done a great job. I especially like that multiple copies can easily be combined into a larger bridge, but it is fine as-is... for one of these "it's a chunk of a larger scene"-style sets, you don't feel shortchanged by what's offered. Whether it offers value for money is a different decision, though. It retails for £89.99 / $99.99 / 99.99€, has 1,092 pieces and weighs 1.66kg. 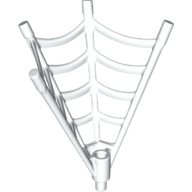 I may as well mention other new parts in this set while I am here. This web piece also is in two other Spider-Man sets this year and comes only in White (Element ID 6153494 | Design ID 25895). TLG call it Web W/ 3.2 Shaft and the BrickLink inventory is still underway at time of writing. Two of them form an (imperfect) hexagonal cone, much like a shuttlecock. The connection points - one at the pointed end and four on the wide end - are 3.18mm bars. Within the set, the piece is attached to Spider-Man's hand, but via the next new piece... 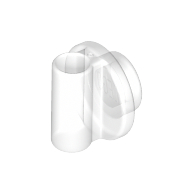 This one is really interesting. If you rotate it from how it is shown in this image it's essentially a 1x1 round plate with recessed stud, but instead of the usual 'anti-stud' underneath, it has a 3.18mm bar laid horizontally. Spider-Man holds the bar in his hand and the web is inserted into the recessed stud... at last, minifigs can point something forward with their arm outstretched... but I'm sure you can think of a gazillion other fabulous uses. I won't discuss these further as I intend to feature this part in a post of its own. But for the record it comes only in Transparent [TLG]/Trans-Clear [BL], has an Element ID of 6153264 and a Design ID of 25893, TLG call it 3.2 Shaft W/ Knob (and, Justin remarked, designers call it "the ring") and BrickLink are yet to add it.

There's also a 10x10 textile net that I believe is a new design, plus plenty of exclusive minifigure parts and some recolours of useful parts. Take a more detailed look by browsing the Brickset parts inventory. Thanks to Huw once again for this database, which alerted me to this new part and details of the set it comes in.