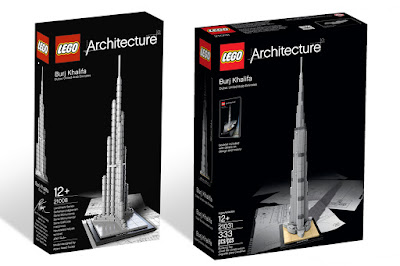 The managers of the LEGO Architecture range aren't too shy about instituting change; they've tweaked the formula of the sets gently in various ways over the years since launching in 2008. The new set 21031 Burj Khalifa is an interesting indicator of this, being the first set in the range to offer a new version of a building that has been released previously - in this case, 21008 Burj Khalifa from 2011 (on the left in the picture). I absolutely love the LEGO Architecture theme but there are some sets I never bothered with, 21008 being one of them. The model is a pretty enough object but paying £22.99 for the pleasure of stacking 112 round bricks was never something that piqued my interest.

Enter 21031, a new, taller version with much more realistic proportions and interesting building techniques. It has 333 parts (which is rather pleasing given that the building is triangular) and retails at £39.99 / US$39.99. 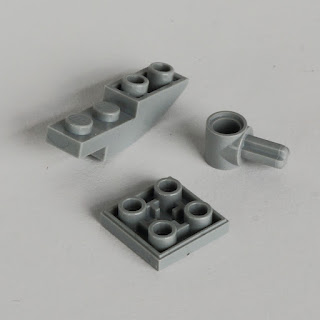 This will be pretty quick as the set only contains two recolours and one new part. Happily, they're all exciting... well, to a light bley lover like me they are.

First the completely new part, of which you get only one. Each year of late another useful, small Technic piece seems to have been added to the LEGO inventory; the kind of part that is so adaptable everyone wants to get their hands on it. This year it is a pin hole with axle (which BrickLink are calling Technic, Axle and Pin Connector Hub with 1 Axle). The Element ID is 6123815 and the Design ID 22961. It isn't exclusive to this set, in fact it already appears in 11 other sets across the Creator, Technic and Bionicle ranges. What is it for? A gazillion things involving pins and axle holes. 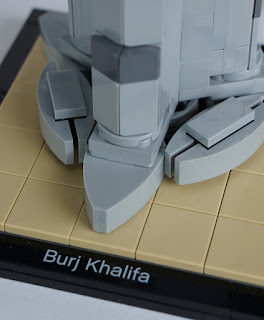 More inverted light bley goodness comes in the form of the 1x4 inverted bow (Element ID 6132872 | Design ID 13547). There are three provided and they're used to mirror the regular 1x4 bow. Whilst we're on the subject, this part also now comes in White, in 31044 Park Animals.

For the first time ever, the 1x8 printed tile bearing the name of the building is not exclusive to the set, as of course one was used in 21008. Ironically though, TLG have had to assign a new number to the one in this set. I haven't compared them (well, I don't own it) but I doubt there is any appreciable difference.

To many, the words "LEGO Architecture set" actually translate as "LEGO parts pack". 21031 certainly contains some pieces in bulk but they're not ones I find especially thrilling. There are plenty of cheese slopes: 54 light bley 1x2s, which is pretty good, and 24 1x1s in Dark Stone Grey [TLG]/Dark Bluish Gray [BL]. 1x2 SNOT bricks with 2 studs on the side are always useful and there are 29 light bley ones here. Less thrillingly, there are 47 1x2 light bley plates but I was happier about the 20 2x2 tiles in Brick Yellow [TLG]/Tan [BL], as I always seem short of these. 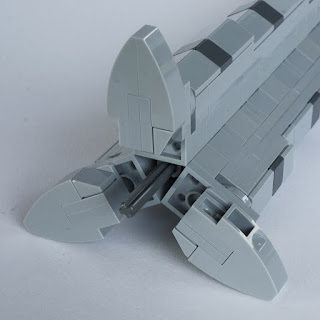 The base is petal-like, indeed because the form is based on a local desert flower (as the booklet informed me). This is fun to build but things become slightly repetitive for a short while as the triangular SNOT core of the tower is stacked up.

The main bulk of the building, the three projecting wings, are less dull because each is slightly different. They are made of stepped lengths of plate coated in cheese slopes, including those ones in dark bley which really helps add some definition to the otherwise monotone form, and the clever idea of spacing the darker bands further apart as the building rises definitely accentuates the height of the overall form.

Towards the top that new little Technic piece assists in returning the build process briefly to a studs-up arrangement. The triangular core is now abandoned and a range of tiles adorn a 1x1 SNOT core to mimic the final tapering to the topmost point of the tower. I do wonder if this change could have been avoided by using the three-axled Technic piece (Design ID 57585) in some way, although it's likely the designer considered and discarded this option for some good reason.

The height of the finished model is quite formidable: 39cm (15"), making it the tallest LEGO Architecture set to date. It also makes it fairly easy to knock over and some may have trouble finding the right spot to display it.

The bulk parts are certainly nice to have but as always with LEGO Architecture sets, the cost is high. I'm very pleased with the two recolours, as will my many studless-loving Spacer friends I am sure. The new Technic connector is very exciting, but other sets offer this in higher quantities. 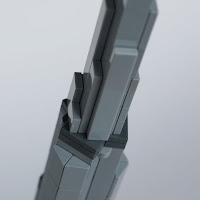 This is a fun and unusual build, as you'd expect of a triangular construction. The variety of techniques balances the mildly repetitive sections. I really enjoyed building it, but having had it on display for a day or so I realised I don't actually like the way it looks all that much. The switch from a triangular arrangement to rectangular near the top distracts from the clean shape of the real building. The use of dark bley highlights definitely helps lift the building from total light bley mushiness, but the solid (and unavoidable) chunks of light bley that form the bulk of the wings really drag the aesthetics down in my view. This truly is the Super Star Destroyer of the LEGO Architecture theme: a whopping bley wedge. A bledge.

Funnily enough, for all its faults, the earlier version 21008 does look prettier and actually achieves it aim: to encapsulate the heart of the design in rudimentary form. 21031 is an exciting and more realistic attempt, a thrillingly tall model and great to build but at the end of the day, I just don't like looking at it for long.


The product mentioned in this review was given to New Elementary by the LEGO Group. This post represents the opinion of the reviewer, not the LEGO Group’s opinion.

Posted by: Admin Posted on 2/10/2016 11:43:00 am
Email ThisBlogThis!Share to TwitterShare to FacebookShare to Pinterest
Labels: Architecture, Set review