The core of the Kermit is a 2X2 round brick that is only two plates high. It has the same central axle hole as regular round bricks/plates. But its main feature are of course the four petal/leaf shapes protruding downwards. These emerge in a + shape (as opposed to an x shape).

I really didn't like it on first sighting; it felt more like a DUPLO® piece to me. But having played with it, it's quite elegant and the four leaves have been precisely engineered to work well 'in System'. You can actually attach a square 2X2 part underneath; the corners project out of the higher spaces where leaves meet. Also, a part placed two plates below a Kermit can be any size; the tips of the petals curve delicately in between studs. Kinda looks like something's melted here, doesn't it? 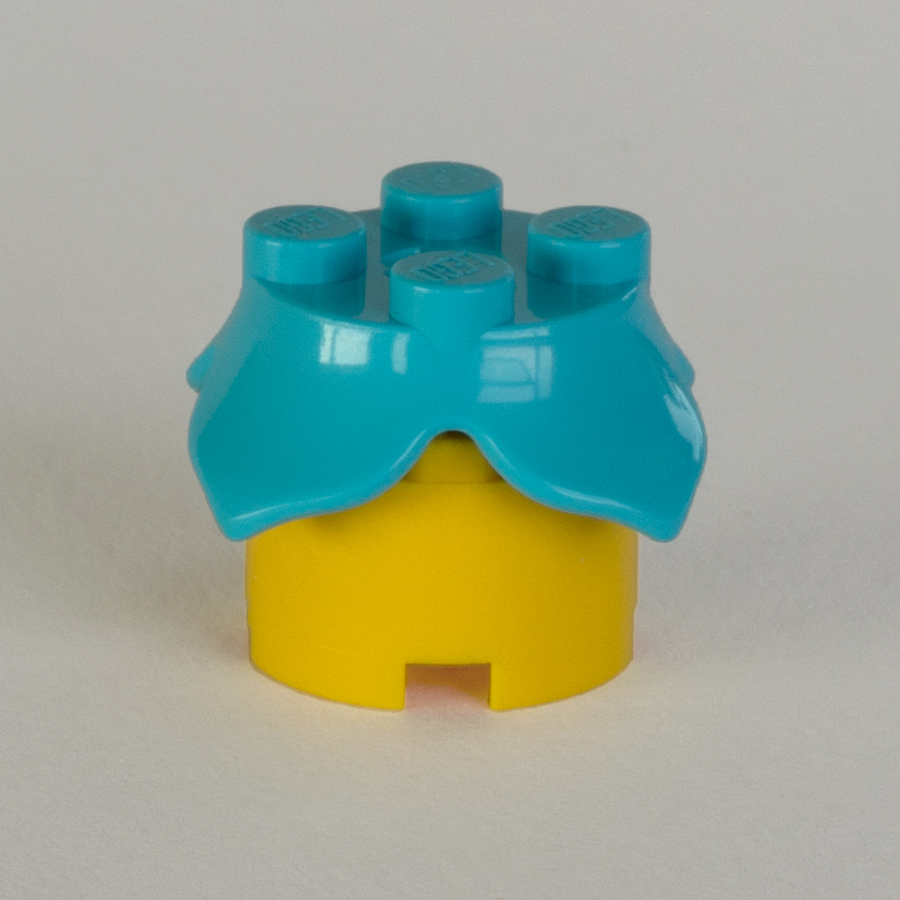 A nice side effect of the leaves protruding in a + shape is that when you place a part underneath, the studs are quite exposed where the leaves meet. As you see here, it feels like there's only one colour below the leaves when in fact there are ridges of Medium Azure brick hidden under each leaf, which would have been exposed had the leaves been designed in an x shape instead. 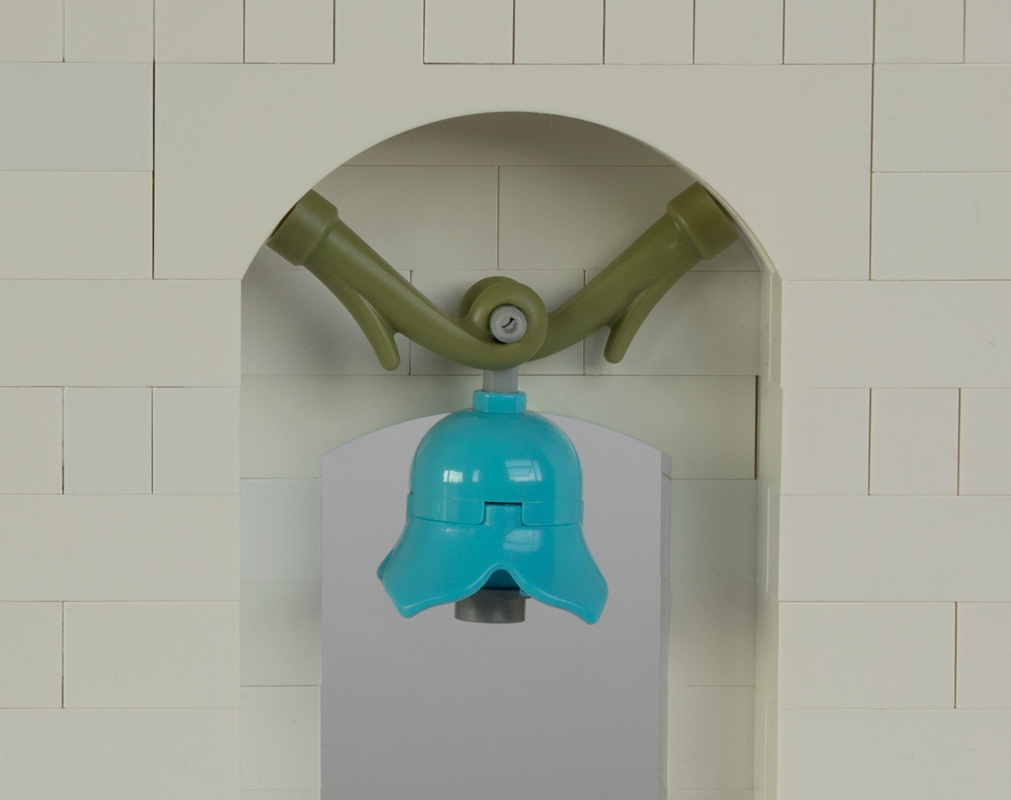 which adds a Medium Azure 2X2 dome on top to create a lampshade. This latter combination really shows off the elegant curves in the design. The resulting shape reminds me of a Pac-Man ghost or perhaps a pith helmet! But here, I've made a ornamental bell using the new curly plant piece. (Medium Azure domes are still rare in sets, having only previously appeared in 2013's 41015 Dolphin Cruiser.)

Here it is combined with some other rounded parts and cones to create some possible architectural features and furniture. 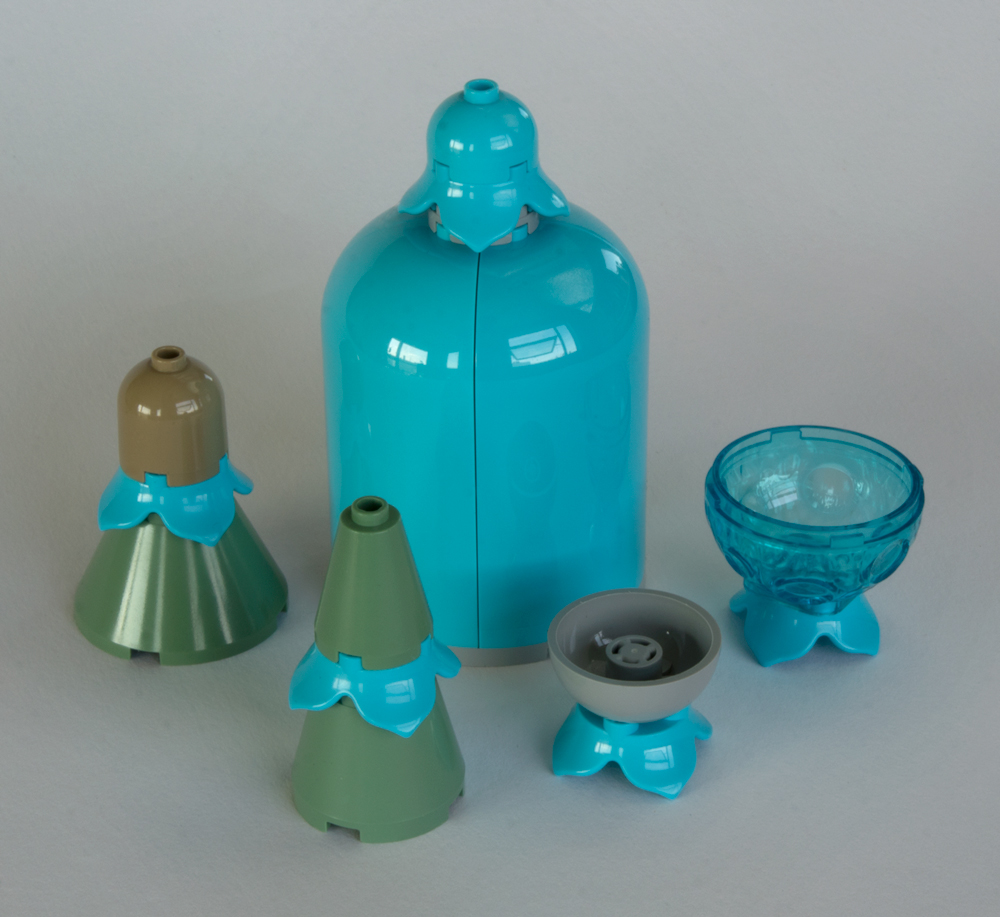 I suspect many of us would like to be seeing this new part in shades of green, given that it resembles plant leaves (and Kermit the Frog's collar). I suspect it will happen, as TLG have categorised it under "Plants" in their database. It's unusual for plant leaves to point downwards in LEGO® parts, so it'll be quite useful for combining with other plant pieces. Turning the part upside-down suggests a lily to me, or some sort of ornamental fountain. 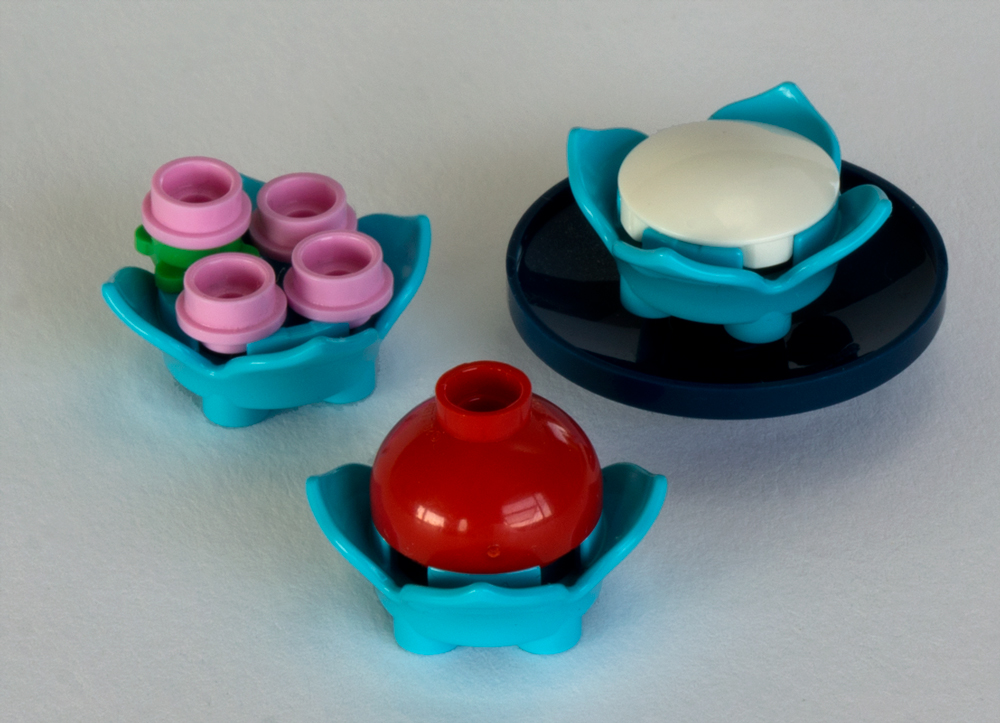 Stacking them creates a weird ridged effect like the spine of an underwater beast. In Reddish Brown this could be a palm tree trunk perhaps. 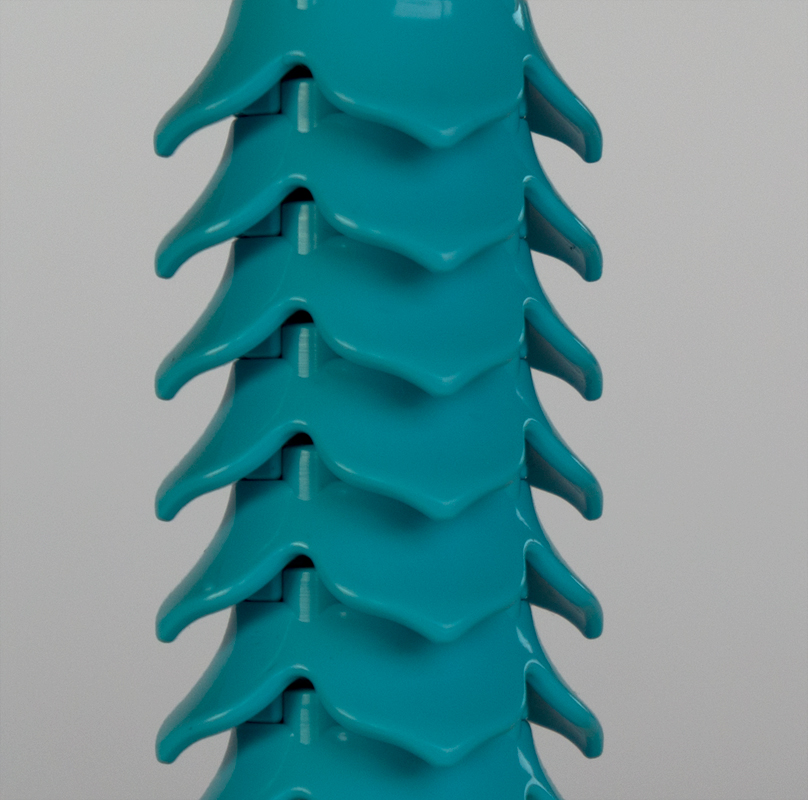 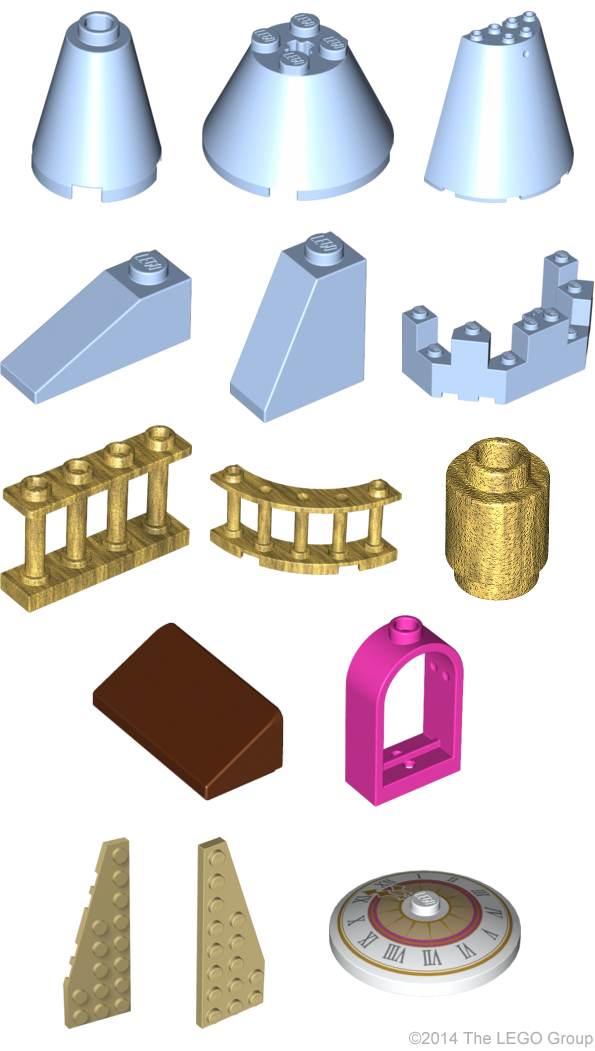 I'll also mention the other exclusive elements in Cinderella's Castle, because boy is it is stacked with them! Most obvious are the various cones, slopes and a castle turret in Bright Light Blue [BL]/Light Royal Blue [TLG]. But there's also some very neat Pearl Gold [BL]/Warm Gold [TLG] elements: the 1X4X2 spindled fence and its matching quarter-circle fence, as well as the humble 1X1 round brick! Not only is that in Pearl Gold for the first time; according to BrickLink this is the first time it's appeared in any metallic colour in a set. Better yet, you get 20 of them in this set. Another useful element making its premiere in this set is double cheese in Reddish Brown, which I'm sure all of us (bar the most hardened of PooP-haters) will be very happy about. Also new are the arched window frame in Dark Pink, left- and right-hand 3X8 wedge plates in Tan [BL]/Brick Yellow [TLG] and a 4X4 dish with a new clock face print on it. A very nice clock face it is too, with Roman numerals, but I suppose the small amount of pink on it may turn some of you off using it, since this is not a common colour on real clock faces.

There are also some new elements in Cinderella's Castle that appear in several other 2014 sets; the 2X4 tile in Medium Lavender, the new heart jewel in Trans-Dark Pink [BL]/Tr. Ml.R.Viol [TLG], the 1X1 swirl in Pearl Gold, and in White the inverted 2X2 dome and the 1X1X3 brick.

The elements I've mentioned here make up 16% of the set's pieces, plus of course I've not mentioned parts like the minidolls. So 41055 Cinderella's Romantic Castle packs quite a new element punch!