"The Naming of Cats is a difficult matter,
It isn't just one of your holiday games;
You may think at first I'm as mad as a hatter
When I tell you, a cat must have THREE DIFFERENT NAMES."

Extract from T. S. Eliot's Old Possum's Book of Practical Cats.
When we were kids and played with LEGO® alone, naming an element was no issue; we had a mental image of what we wanted and we located it. But many of us also liked to build with our siblings and friends and this is where our naming issues began. I might have asked my sister for "a red two-er" but this did not guarantee I would be passed the red 2X2 brick I had in my mind - she may have given me a red 1X2 plate instead. More successful were our nicknames; if I asked for a "milk bottle" I would confidently get a white 1X1 round brick and an "empty milk bottle" would gain me one in Trans-Clear [BL] / Transparent [TLG]. Those were simpler times. Now milk is sold in all kinds of packaging by many different companies.


As the AFOL community formed on the internet in the 1990s, the need to name and categorise LEGO parts suddenly became very necessary. For example, this 1993 thread on rec.toys.lego (RTL), which was one of the first AFOL forums, describes tiles as one-third height bricks with a flat top. Catchy. In those days, TLG didn’t even recognise the existence of AFOLs let alone share information with them, and so inventories with the official names and numbers of everything were not available. AFOLs created lists of sets using the set numbers on boxes and names from sales catalogues, and as shown in the previous link they also created lists of part numbers (what I refer to here as Design ID, to match Pick-a-Brick

) which had begun to be embossed on the undersides of elements from the mid-'80s. However TLG’s numbering systems weren’t fully known, failsafe nor wholly user-friendly and so adaptations or alternate numbers were created by the community. The major players here were the contributions to the sites LUGNET, LDraw and Peeron.

In June 2000 BrickBay was launched by AFOL Dan Jezek. Over the next couple of years this resale site for LEGO sets and individual parts became hugely popular; successful enough for the lawyers at eBay to make him change the name, which he did – to BrickLink. Despite this no-doubt frustrating setback the site went on to arguably become the most important AFOL resource on the web, thanks in part to the semblance of order it brought to the chaos of LEGO parts by naming and categorising them into the BrickLink inventory, which Jezek had always made freely available for anyone to download. The online community supplied much of the data and images and continue to do so to this day, and from what I have read online it seems that in those early days of the site many names, numbering systems and even images came from those co-existing sites LUGNET, Peeron and LDraw. BrickLink’s success grew and grew. It was rumoured in the mid-2000s that BrickLink’s sales were equivalent to a quarter of all LEGO purchased by AFOLs. Competitors appeared and disappeared, unable to match the quality and scale of BrickLink’s offering.

In recent years, however, things have changed. Sadly, Dan Jezek died in 2010 aged just 33. Despite rising popularity – these last three years have seen twice as many visitors than the site obtained in its entire first ten years of existence – it had never received the massive overhaul needed to remain competitive in today’s expectations of internet sites. Infuriated by the extensive security flaws of the site, it began to get hacked by person/s demanding these issues be fixed. Response from the new admins, Jezek’s family, was slow and rare and some fixes ruined finer details of functionality. Community frustration and fear grew and it became clear that not only was the time ripe for competition, it was possibly necessary. Indeed, competition began to appear in 2013 and of these it is Brick Owl, which launched in late June, that seems to be most successful and now has over 500 sellers. A proportion of this success is no doubt down to the “BrickLink Sync” functionality they offered, which utilised Jezek’s free-to-access data to allow sellers to maintain stores at both sites more easily.

Just a few weeks earlier, the announcement had come that Jezek’s family had sold BrickLink to Jung-Ju “Jay” Kim, the founder of a successful online game company based in Hong Kong, and that development of the long-mooted “BrickLink 2.0” was now to begin. This development was cautiously welcomed by most of the AFOL community, especially given Kim was an AFOL himself. Things have taken a sour turn this month however.

On September 10 BrickLink Limited amended the Terms of Service (ToS) of the site with the stated reason: “to prevent our competitors from unfairly profiting from the database that the BrickLink community has painstakingly built over time”. (That is interesting phrasing on their part, emphasising the perceived harm to the community rather than the financial loss to their company.) Gone was the sentence in the ToS indicating that text and images are the intellectual property (IP) of their creators, and a new clause assigned usage rights to BrickLink Limited. (It’s worth noting these are “non-exclusive” rights, meaning the contributor is allowed to use the image anywhere else too.) Suddenly it seems information collated partially by unpaid AFOLs and initially partially based on data from other sites has been sold and is now thoroughly owned.

The other main amendment forbids using “any content or data you receive from or which is displayed on the Site” with “any third party”. The vagueness of this clause is especially disturbing. The intention is to stop competitors using BrickLink’s catalogue data but in its current catch-all wording, this clause could for example stop me providing reliable part availability information on this blog. It could even apply to you ringing up a mate to tell them a BrickLink store is selling a thousand Light Bluish Gray Boat Mast Rigging Long 28 x 4 for 5p each. (If indeed they were. Which they’re not.) I don’t of course suggest BrickLink Limited would ever take things that far, but there’s no guarantee of how far they will take it. But laying down vague confusing clauses like this and expecting the community to swallow them really isn’t the wisest piece of PR.

On Wednesday, Lawrence at Brick Owl published a letter purportedly from BrickLink Limited threatening legal action. The more understandable section demands that Brick Owl cease to use the “Bricklink Sync” functionality. It’s sad for Brick Owl sellers to lose this, however the very gray area is whether Brick Owl’s usage of it is more in their own good than the community’s. Lawrence will be disabling the functionality on Saturday at around 4pm.

The far stranger and vaguer sentence in the letter is BrickLink Limited’s claim that “you are using our unique numbering and naming systems for the Lego pieces”, a claim restated in their clarification post on BrickLink Forum on Thursday: “Bricklink’s intellectual property comprises amongst others its system of naming, numbering and classifying LEGO parts, set and minifigures.” That’s as much detail as they’ve gone into, and clearly more detail is needed because as it stands the statement is ridiculous – the vast majority of their part and set numbering comes from TLG and many of the other nomenclature stylings were adopted or adapted from earlier sites. For BrickLink to now claim them wholesale as their own IP is at the very least galling and at worst a breach of IP rights (by their own woolly definition). In the same post they sagely reminded us, “let us not forget the countless hours that BrickLink catalog and inventory admins have spent on shaping Bricklink’s catalog together with the support of our user base,” clearly forgetting the countless hours that admins and users spent shaping LDraw, Peeron and LUGNET data, and indeed LEGO employees shaping TLG data, which was then used by BrickLink… for financial gain.

The naming and categorisation of parts and minifigs are far more defendable areas of their claim. TLG’s part names and categories are very different and far less intuitive on the whole. BrickLink’s are by no means perfect and, as with any large and complex system, they take time to absorb. But their system is the dominant one and is far and away the closest thing we have to a community standard. And this is where I think BrickLink Limited are really shooting themselves in the foot. To force every competitor to come up with their own unique naming and categorisation system is compounding the nightmare for us, and if a competitor offers the guarantee of a new catalogue that remains freely publicly available forever, on which site will the community choose to volunteer their time in providing free data?

I don't wish to belittle the amazing work Jezek did and I think BrickLink Limited are right to protect their business, but when their business is founded on the work of the community, the situation is far more delicate than their current mishandling of the situation caters for. Do the community actually want this sort of protection? Reactions on the BrickLink Forum are varied; many welcome the changes but others are leaving BrickLink for good – some are even demanding their image and text contributions to the database be deleted. It will be interesting to see if BrickLink Limited ignore these requests and ride the risk being sued by an angry (and rich) AFOL.

Of course BrickLink Limited’s intentions all boil down to not losing money to a competitor who is clearly worrying them, but I’d have hoped that they'd chosen to direct all faith into BrickLink 2.0 rather than altering the open nature of the catalog. The pressure on the new version to exceed every expectation of the community is now even greater, because they need to deliver a product so amazing it overcomes this increased distrust from the disenfranchised sections of the community and sweeps all competition away by merit, rather than with legal weight. In financial terms, Brick Owl are the David to BrickLink Limited’s Goliath and can’t risk an expensive legal battle. Consequently the intimidation has worked and Brick Owl are removing all their “BrickLink” names and numbers, despite the fact that the question of what constitutes BrickLink Limited IP is legally unchallenged. How interesting it would be if TLG played Goliath with BrickLink Limited.


I got a bit heavy there didn't I? Enjoy this unrelated brick owl built by alexhui0416, whilst I go trademark the phrases “milk bottle” and “Apollo stud”. 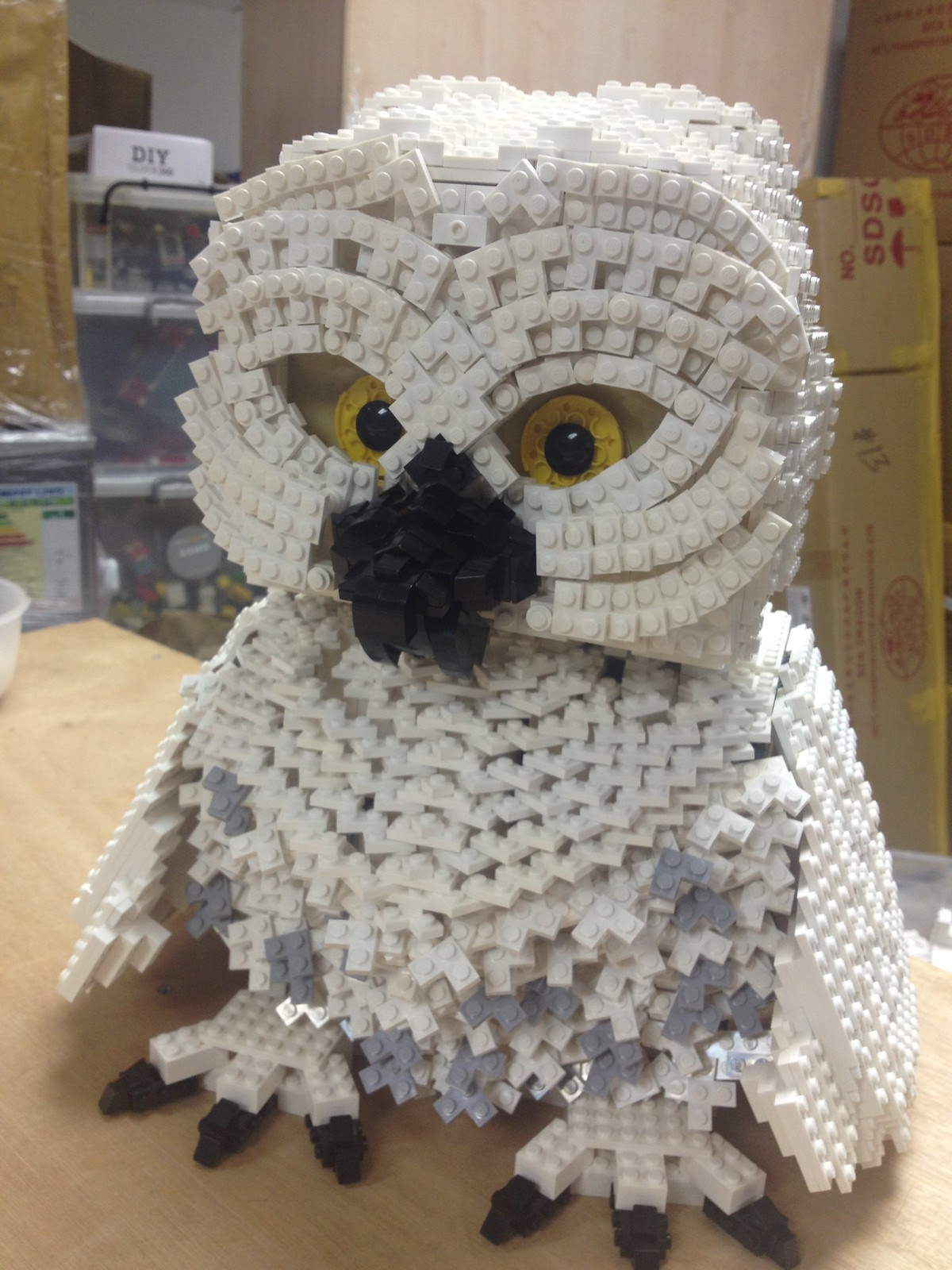 I'm indebted to DaveE for the fascinating link to RTL. There are plenty more on his AFOL History Project, including what is possibly the first use of the term AFOL, and Dan Jezek's announcement of BrickBay on LUGNET.
Admin: Tim Johnson Posted on 9/27/2013 01:33:00 am
Email ThisBlogThis!Share to TwitterShare to FacebookShare to Pinterest
Labels: Commentary, Community