Omid (@nwbricks) is back today, monster-jam-packed with more LEGO® Technic reviews for you: 42118 Monster Jam Grave Digger and 42119 Monster Jam Max D. Buying these sets? Consider using our affiliate links: UK LEGO Shop | USA LEGO Shop | Australia LEGO Shop, for other countries 'Change Region'. New Elementary may get a commission. The products in this article were provided for free by LEGO; the author's opinions are not biased by this. 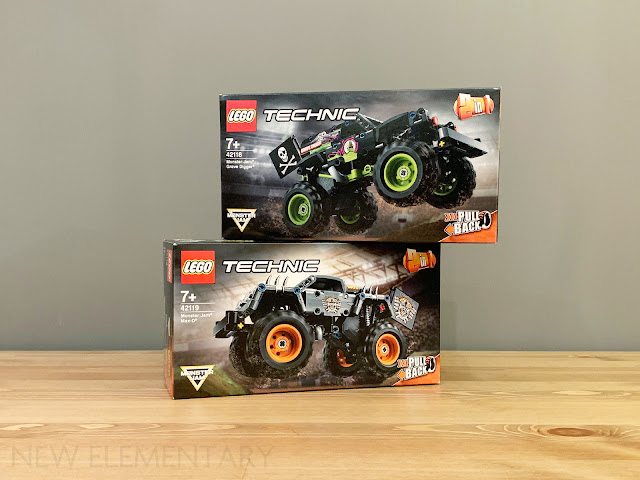 In my second double-header review we take a look at the new Monster Jam LEGO® Technic sets, Grave Digger and Max-D. Featuring licensed trucks from the live motorsport event tour, pullback motors and some interesting recolours, they are aimed at intermediate young builders with just over 200 parts each. They both weigh in at £17.99/ $19.99/ 19.99€ and were released on 1 January as part of the first wave of 2021 sets. Start your engines!

Those bright Tic Tac-coloured rims catch the eye immediately, and you’d be forgiven for thinking we’re in for a glut of new parts. As it happens, the array of recolours is fairly limited — only Grave Digger offers anything beyond Black or Dark Stone Grey/ Dark Bluish Gray, although both sets share a selection of relatively rare pieces. Let’s start with the green.

When the 42115 Lamborghini Sian was released  in 2020, buried amongst all the hype about the model itself was a universal issue with colour consistency across the Bright Yellowish Green/ Lime elements, explained here by LEGO® Consumer Perceived Quality Director Bjarke Schønwandt as being an ongoing issue with materials supply. Another reason for discolouration can be a badly designed mould causing the plastic to get too hot before being injected. 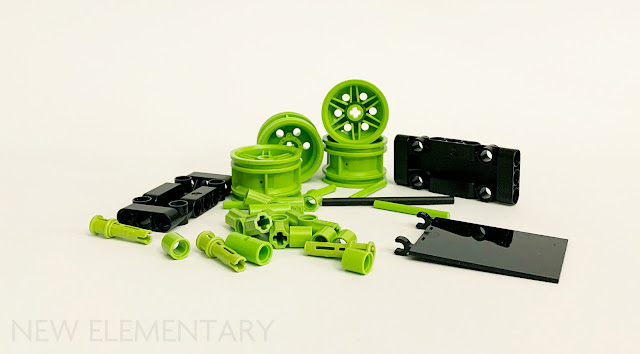 So it looks like either LEGO are slowly working through their supply of discoloured parts or, more worryingly, the problems haven’t been fixed yet. The main culprit in this set is Technic Pin Long with Friction Ridges Lengthwise and Stop Bush (6308237 | 32054), which is noticeably different from the other parts. 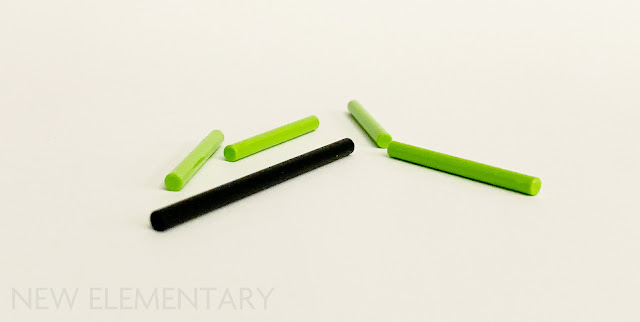 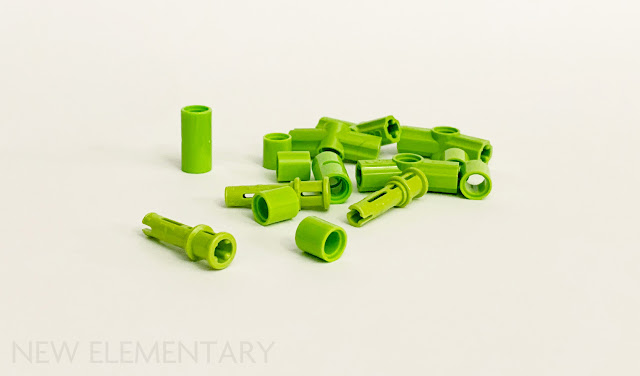 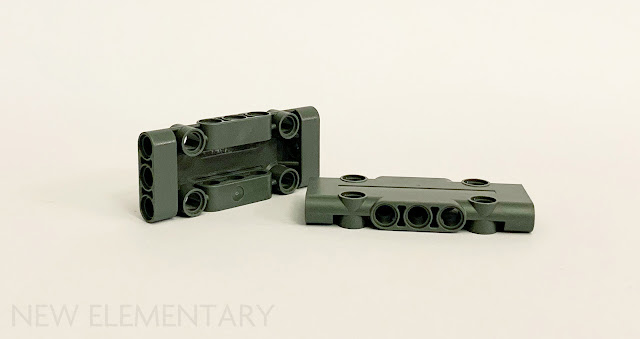 And on that note, that same Technic Panel 3 x 7 x 1 is available for the first time in Dark Bluish Gray (6321715 | 71709) exclusively in the Max D model. I promised in the review of the 42124 Off-Road Buggy that we’d start to see a bunch of recolours of this part, and I imagine we’ll be getting a lot more through the rest of this year. 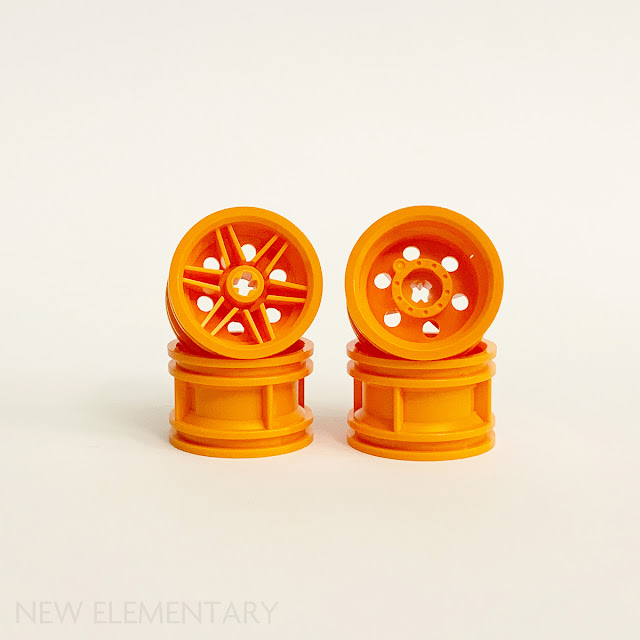 The orange rims are notable for one, very niche reason. They’ve appeared in four sets since 2009: can you guess what links them all together? Take a look at the list: Monster Jumper, Monster Truck, Monster Burger Truck and Monster Jam Max-D. Whether or not this was intentional is up for debate, but it’s a funny little quirk that came up in my research! 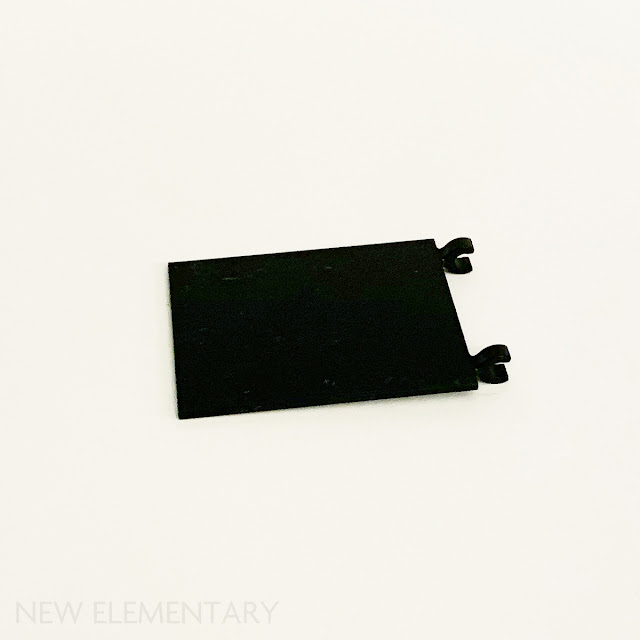 As you can probably guess, both builds are centred around the pullback motor. This little unit is surprisingly powerful with very high torque for the first few revolutions before it starts to free-wheel, giving good acceleration over short distances. There have been various incarnations of the LEGO pullback motor over the years, and this one first showed up in 2013. 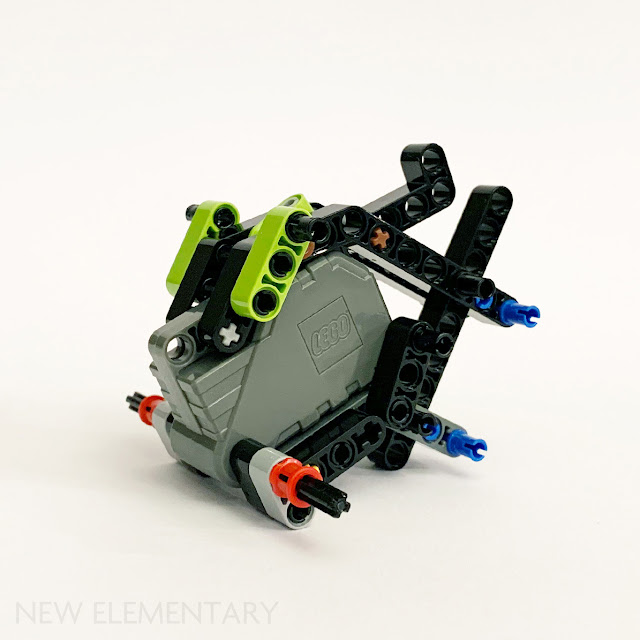 Given that these sets occupy a sort of middle ground between the super simple Technic starter sets and more complex models like the Senna or Wrangler, the build process feels about right. It’s fairly straightforward, and while the two sets are far from identical they do share some characteristics as you can see in the photos below. 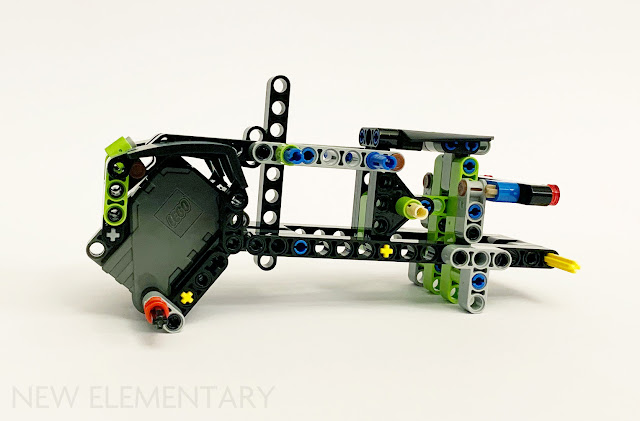 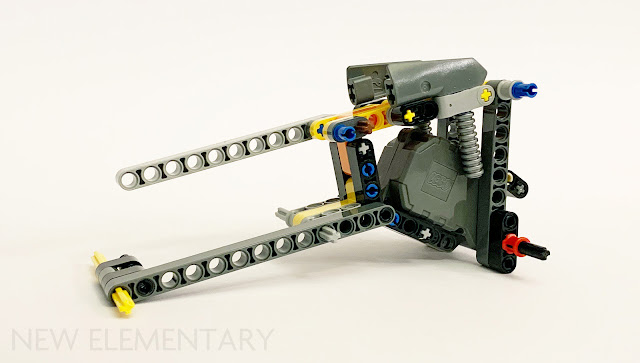 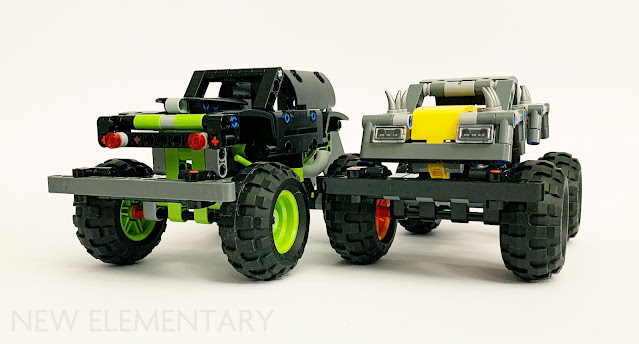 When finished, the models both look the part! I would have loved to have seen the new tyres we got in the recent City Tractor, but don’t let that detract from two very fun little sets. 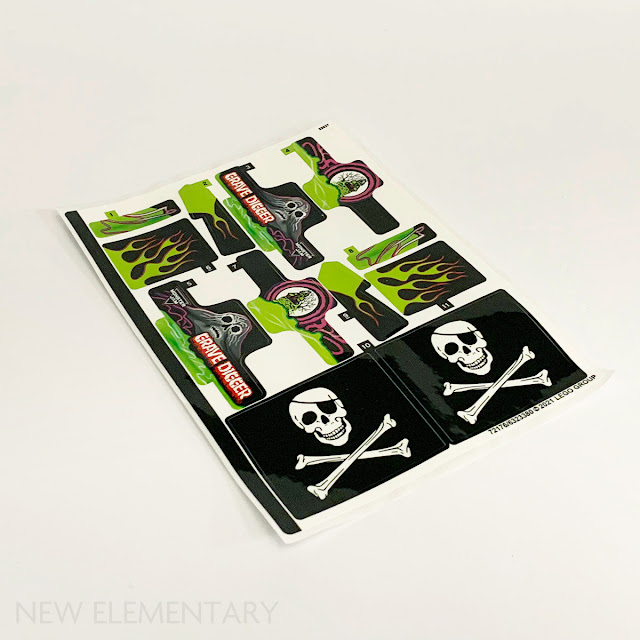 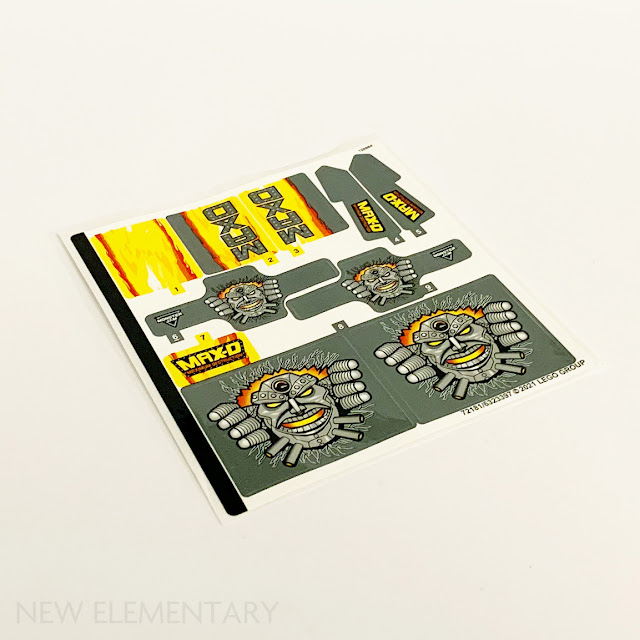 As mentioned above, both models come with sticker sheets — though as per usual I didn’t apply them. I recently built a Greek food stall using one half of the Gyrosphere sticker from a Jurassic Park set, and it looks like we might have another great donor here. Max-D is a pretty niche affair, though I’m sure they will appeal to fans of the real-life truck. Grave Digger on the other hand gives us two 4x6(ish) skull and crossbones stickers which will certainly excite fans of a certain LEGO theme. Pirates IV confirmed??

Ok, so that’s all well and good so far, but these are most definitely not display models. They are to be played with until the motors are dead and the bottom of every door in the house is chipped or dented. The 42124 Off-Road Buggy looked great but wasn’t much fun to play with because of the flawed Control+ system, so how do these simpler models hold up in that regard?

Short answer: they’re awesome. Pullback cars are a delight I’d forgotten about, but there is something childlike, almost primitive, about them and as soon as I started revving the motor along the floor I felt like I was 8 years old launching toy cars down the stairs again. I think it’s because you can’t ever know what’s going to happen when you let go: like a pair of clockwork teeth or a parking warden, you wind it up and stand back hoping for the best. 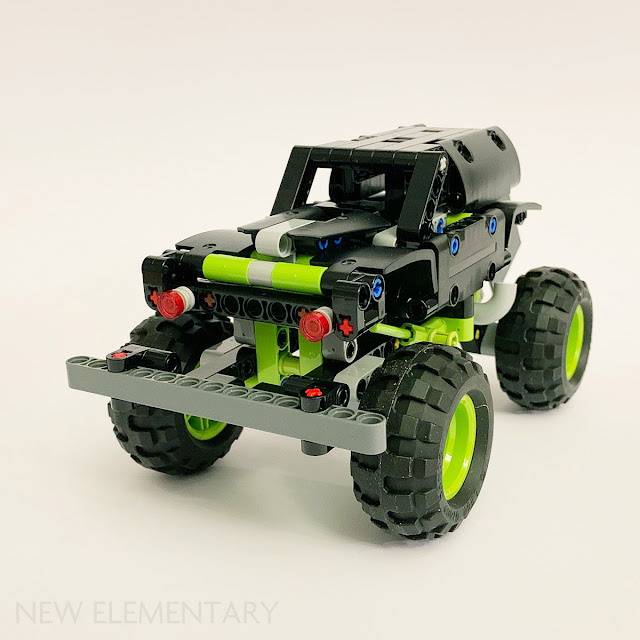 Of the two, I prefer Grave Digger. Under the hood, there’s not much to separate the two and certainly no impact on the motor performance. 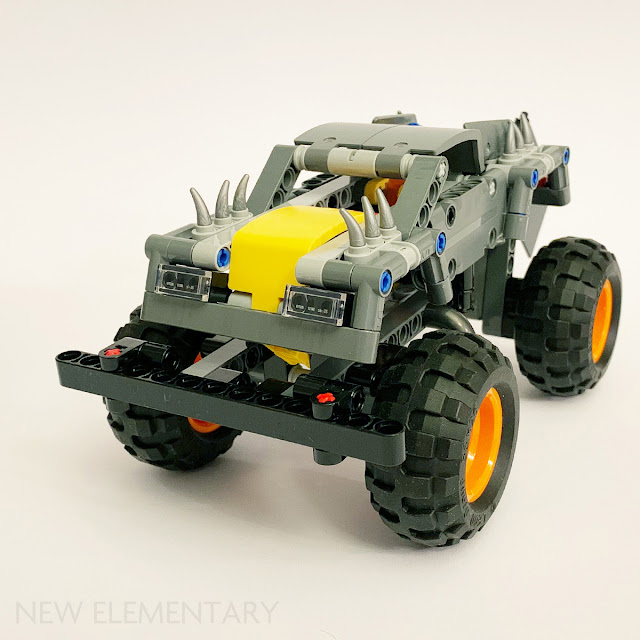 These two little sets are proper, hands-on fun. You aren’t abstracted away from the experience by having to constantly look at a phone screen. There’s no batteries to worry about, no apps nor wires. No firmware updates, no Bluetooth, no connectivity issues...

Ripple dissolve. It’s a Sunday, sometime in summer 1998. You just got back from playing football at the park and the trees are dappled with golden light from the afternoon sun. There’s a wood pigeon calling somewhere in the distance. You set up a ramp with a bit of wood and an old Yellow Pages, get down on the floor, wind up the motor and let her rip. Bits fly off everywhere; mum yells at you to stop destroying the damn skirting boards and the cat wonders what the hell is going on with this weird plastic mouse.

This is what LEGO is all about.

Posted by: Admin Posted on 2/24/2021 06:32:00 am
Email ThisBlogThis!Share to TwitterShare to FacebookShare to Pinterest
Labels: Set review, Technic