Omid (@nwbricks) reviews LEGO® Technic 42116 Skid Steer Loader and 42117 Race Plane. Buying this set? Consider using our affiliate links: UK LEGO Shop | USA LEGO Shop | Australia LEGO Shop, for other countries 'Change Region'. New Elementary may get a commission. The products in this article were provided for free by LEGO; the author's opinions are not biased by this. 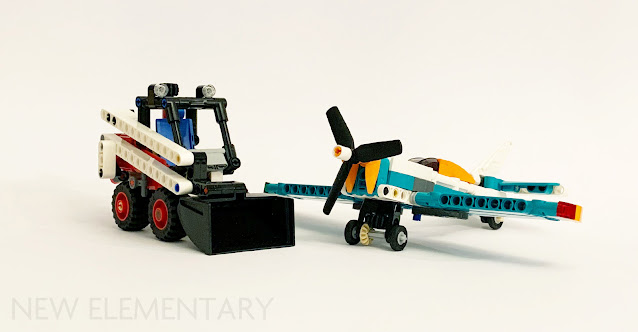 This double review examines two small-but-mighty LEGO® Technic sets. With just shy of 300 parts between them and a price tag of £8.99 / US$9.99 / 9.99€ each, 42116 Skid Steer Loader and 42117 Race Plane are definitely targeted more at young builders but are not without their fair share of neat features. They were both released at the start of the year in the first wave of 2021 Technic sets. Let's take a look!

There's a nice array of parts across the two models, including specialised moulds for the bucket and propeller. 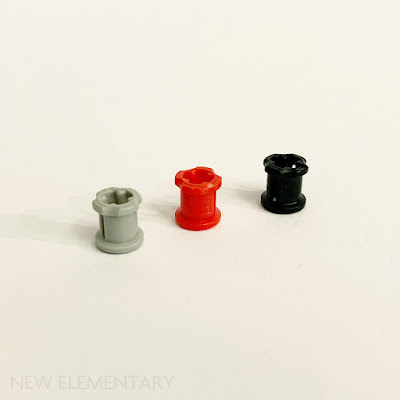 The skid steer doesn't have any new parts, but it's always nice to see the Technic Bush make an appearance in Black (6332148|3713); they last showed up in 2018 in the Darth Vader and Darth Maul poseable figures but had been dormant for 13 years before then. 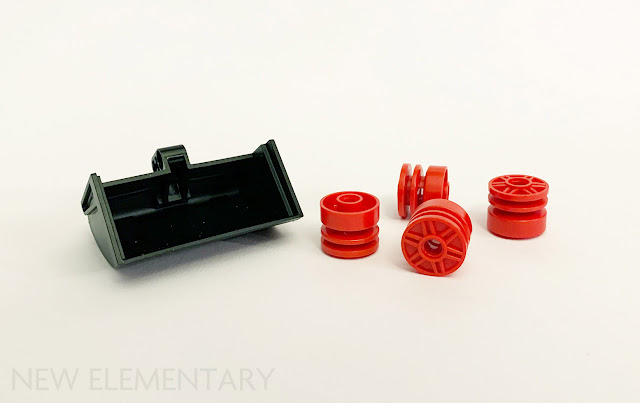 In this set you could potentially get a new version of Tile 1 x 1 with White and Red Gauge Print  (4255629 | 3070bpr0007) as well as Tile 1 x 2 with Red 82, Yellow and White Gauges Print (4227776 | 3069bpr0101), both still printed on Light Bluish Gray. I didn't, however. We're currently in a bit of a transitional phase as far as printed pieces go, with some elements across a whole range of sets getting fresh new prints, but there's no guarantee which version you're likely to get — in 10278 Police Station  for instance, some people (author included) got a new version of the 2x2 white clock print with a red second hand, while others got the older, plain black version. 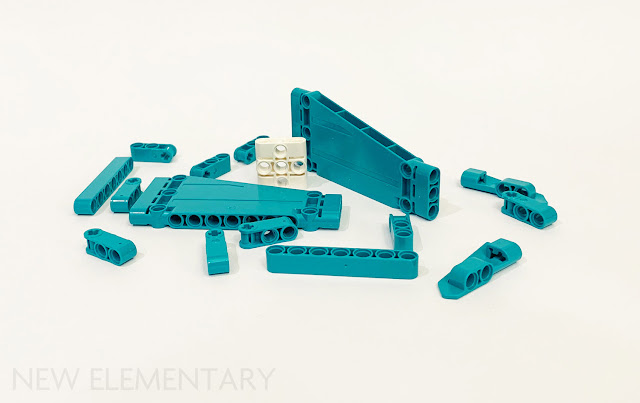 As you might imagine for such small sets, the build process is pretty straightforward. One thing that always strikes me with small Technic sets is how everything looks so weird until you put the wheels on. With larger sets you have the whole process of building a chassis then adding bodywork and so on, but with such a low piece count there's no room for anything that doesn't serve a purpose here. 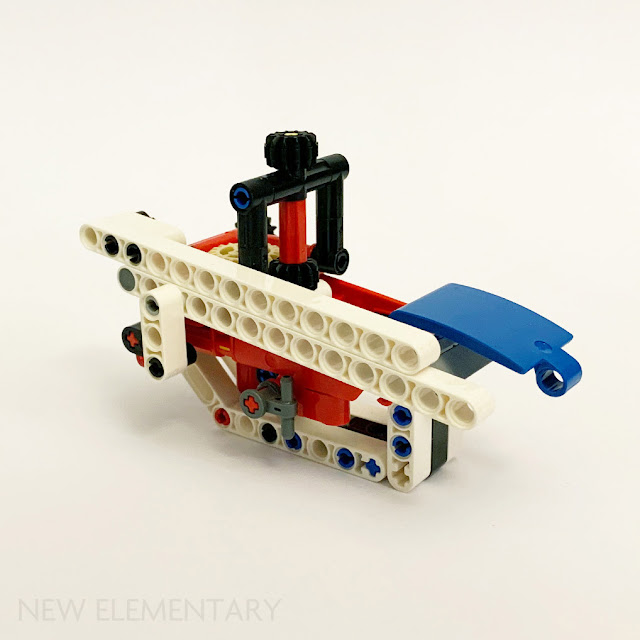 The skid steer build is mainly centred around this central column, which contains a small set of gears used for operating the excavator functions. The mechanism is quite satisfying, with one cog used for raising and lowering the arm and another for manipulating the bucket. 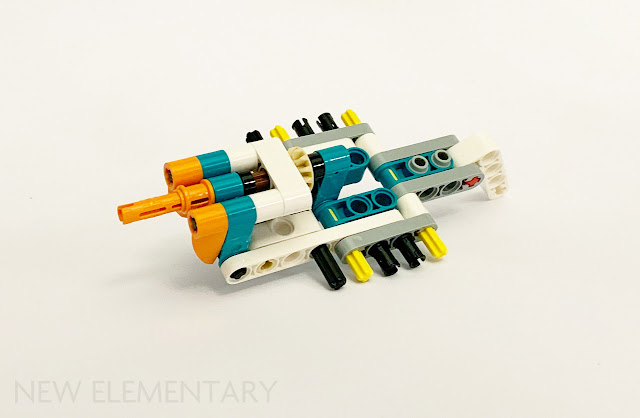 Meanwhile, the race plane is slightly less complex with just one small drivetrain, used to transfer the motion of the wheels up into the propeller. It's a satisfying little feature that adds a big swoosh factor!

Once built, both models are pretty decent considering their scale. 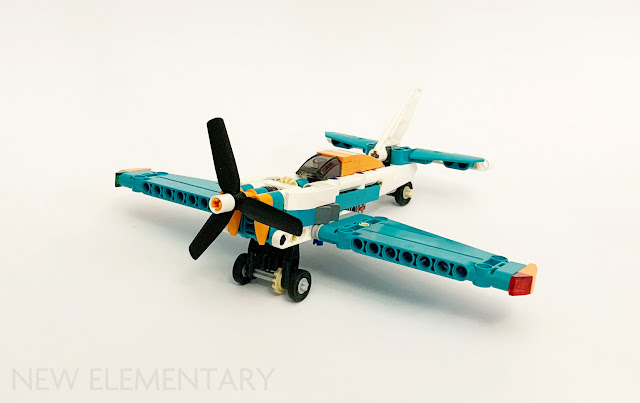 The plane is just a really cute little model and would look great hanging from the ceiling. 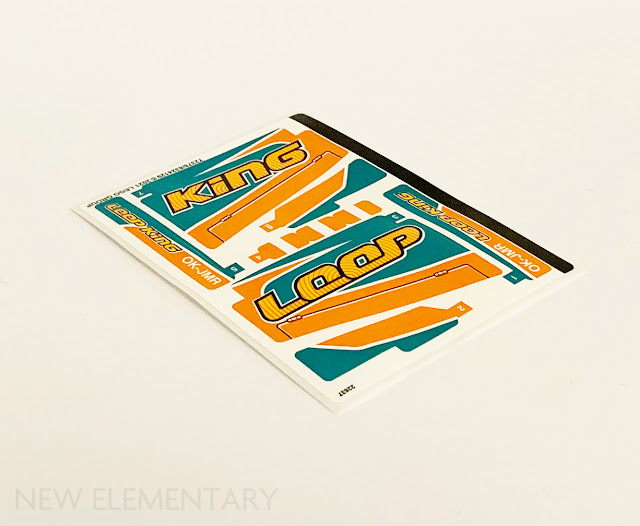 It does include a sticker sheet, which I neglected as usual. I personally think it looks fine without them and stickers on panels make my toes curl a bit, but if you're only going to display it I guess there's no harm. 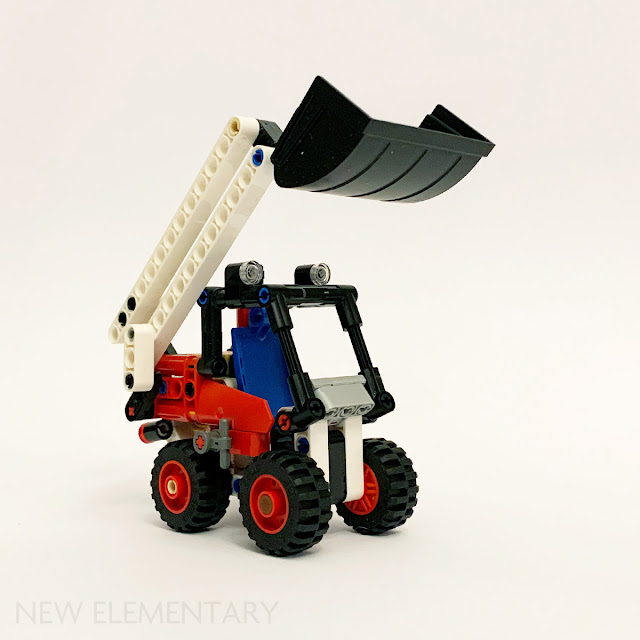 Similarly, the loader more than holds its own next to its bigger, all-singing all-dancing cousins and the play features prove there is still a firm place for HOG functions in the Technic world. 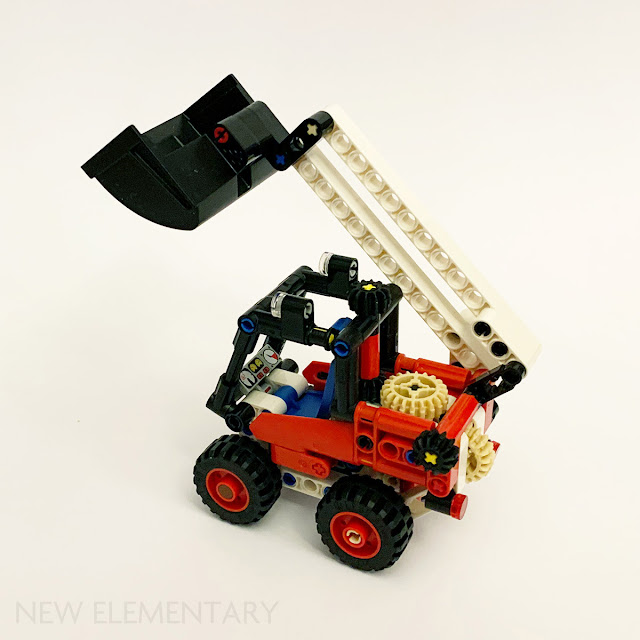 As I touched on in my previous review, 42124 Off-Road Buggy, there is a certain "mystery box" aspect to the new-fangled Bluetooth Control+ sets. They are genuinely impressive — pushing the envelope as far as toys and tech goes — but nonetheless it is reassuring to see these dinky sets still getting some love.

When you turn the handle, you can watch the kinetic energy transfer through the worm gear and manifest in the arm going up and down — no fiddly apps here. Boom!

These are great little sets. They don't try to do too much, and there's nothing overly complicated here — indeed the most frustrating part of the build would be applying the stickers, if you chose to. Nevertheless they include some neat mechanical functions that serve as a great introduction to Technic for young builders.

Considering the price you really do get some good value, with plenty of play functions in each model and a decent set of parts both old and new, including those exciting new teal recolours in the plane. I love little sets like this, and it's refreshing to build a classic Technic model with no wires or apps to worry about!


All text and images are © New Elementary unless otherwise attributed.
Posted by: Admin Posted on 2/06/2021 05:28:00 am
Email ThisBlogThis!Share to TwitterShare to FacebookShare to Pinterest
Labels: Set review, Technic