Thomas Jenkins (on Instagram) reviews two upcoming LEGO® Brick Sketches today: 40456 Mickey Mouse and 40457 Minnie Mouse which will be released on 1 March 2021 priced £14.99/ US$16.99. Buying them? Consider using our affiliate links: UK LEGO Shop | USA LEGO Shop | Australia LEGO Shop, for other countries 'Change Region'. New Elementary may get a commission. The products in this article were provided for free by LEGO; the author's opinions are not biased by this. 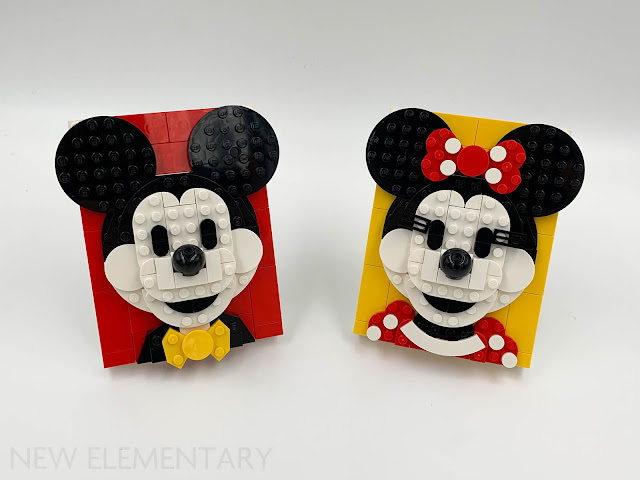 LEGO® designer Chris McVeigh is back with more delightful recreations of two iconic characters: Brick Sketches 40456 Mickey Mouse and 40457 Minnie Mouse. It’s interesting to see LEGO continue to expand their range of art-themed sets and offer something different from the typical building experience. I’m certainly intrigued to see how these sets stack up.

A quick glance over the parts for Mickey and Minnie show a good helping of plates in a variety of shapes and sizes in bold primary colours.


There are no new moulds or recolours in the Mickey set but there is one element of note: 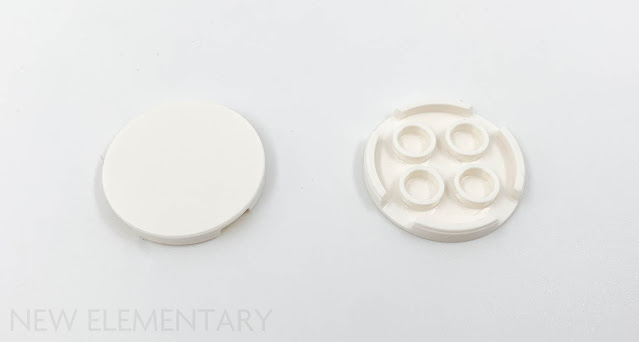 Likewise Minnie boasts no new or recoloured parts but there are a few more noteworthy elements. 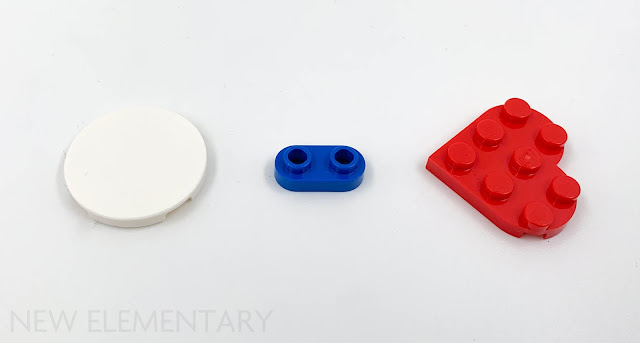 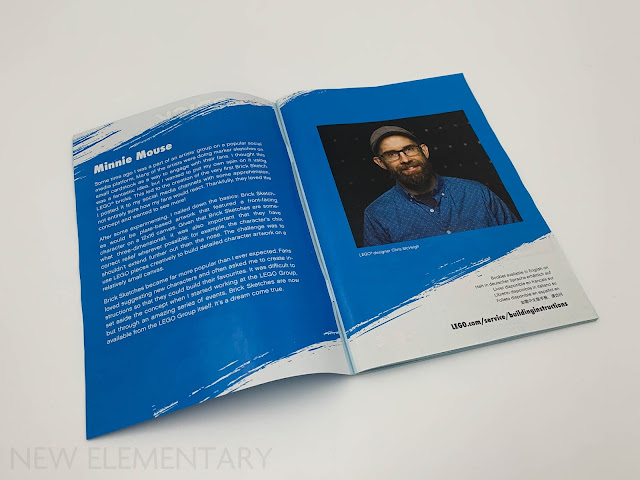 The instructions start with a foreword from designer Chris McVeigh, something unusual for a set of this size. It gives a little information about how these sets cae to be. For a little more insight into the conception of these sets, our interview with Chris here. 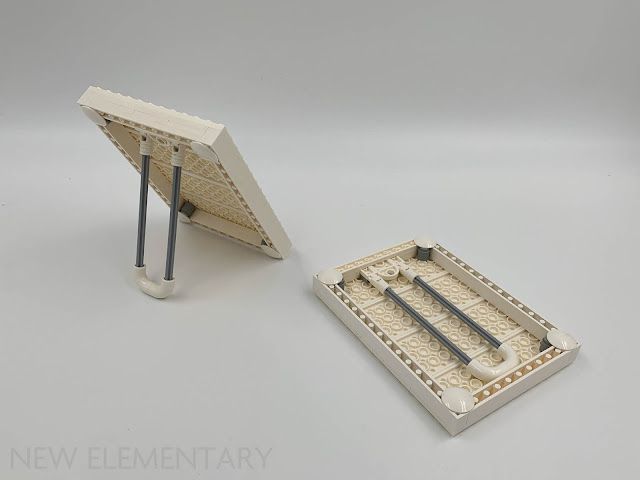 Both builds sit upon the same white frames shared with the other four sets in the Brick Sketches line. The choice of white as a base definitely emulates a blank sketch book, just like Chris’s original models. It’s a bit of a shame that we don’t get a couple of brick built markers complementing the set to drive this feeling home and pay homage to Chris’ original concept. A simple stand is concealed within and a Plate Special 3 x 2 with Hole (3176) allows the completed build to be mounted on a wall with the help of a nail.

As you may have guessed, the builds consist almost exclusively of plate stacking. But that’s not to say these were boring builds. Watching the parts assembled into the two iconic characters - with an uncanny resemblance - was surprisingly satisfying.

Both builds begin with a layer of tiles. It seems the number of studs has been kept to a minimum in each layer of parts to ease the removal of the parts above. The builds came together very quickly, barely ten minutes each, but what do you expect from a set of this size? 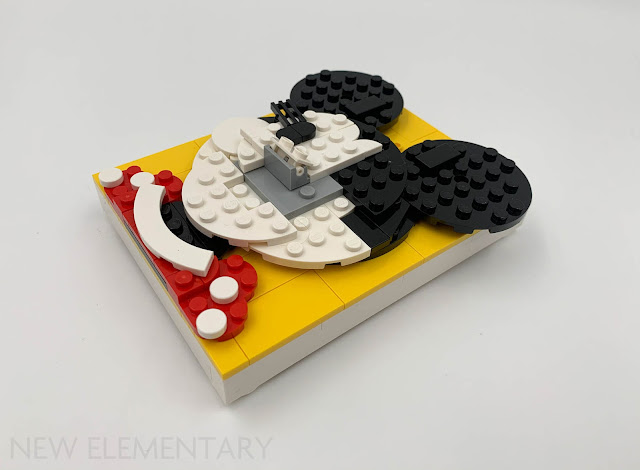 There are no unusual building techniques to speak of but the use of grill tiles for Minnie’s eyelashes is a bit of NPU. Indeed, the whole parts selection and their assembly into what is undeniably Minnie and Mickey Mouse is really quite clever. 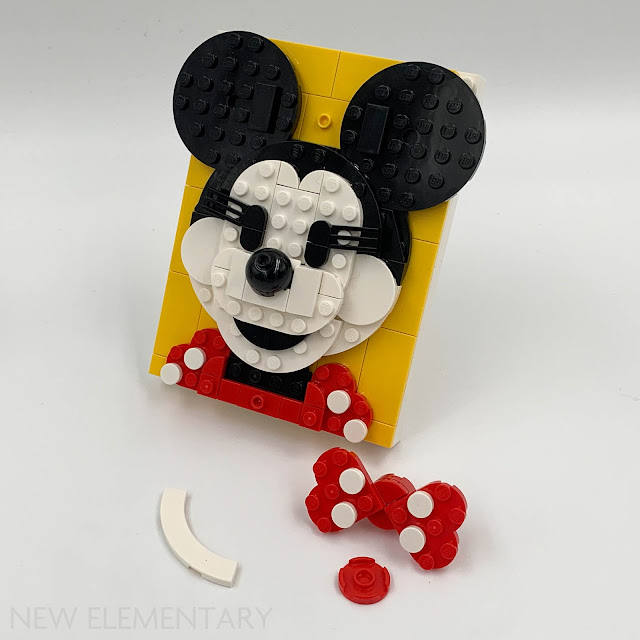 The building experience is something akin to assembling a collage or a mosaic. It makes me want to give it a try myself. 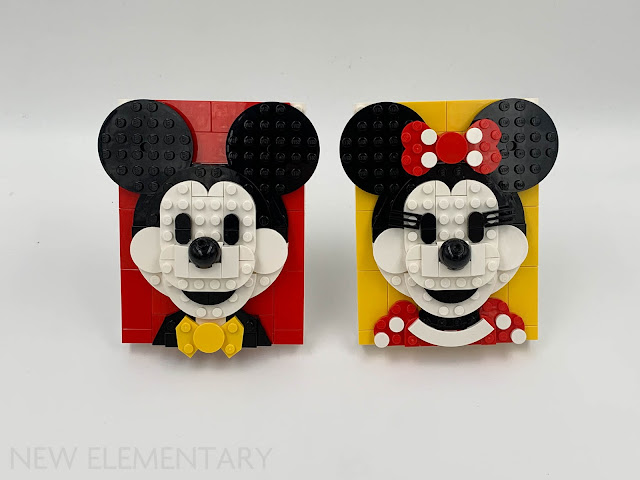 The stylised renderings of the two characters are wonderful. Considering that these characterful portraits were created with a handful of basic shapes, I can’t help but be at least a little impressed. 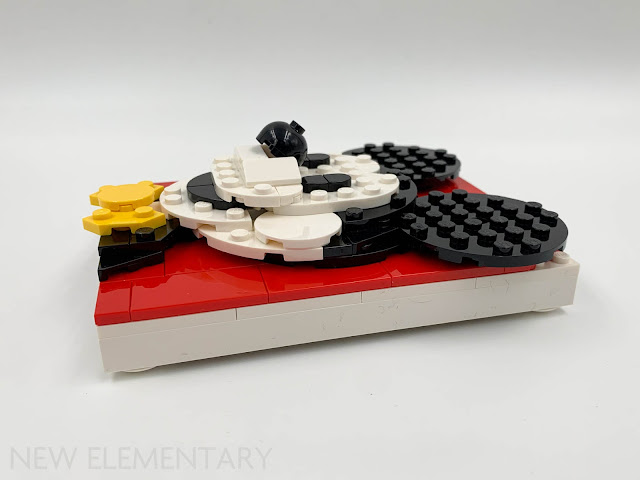 Despite their very flat appearance on the front of the box, these are more substantial than you’d expect. The frame adds a bit of bulk and the ‘sketch’ element of the build itself isn’t that flat at all - especially the noses that sit proud of the base by quite some distance. It creates the effect of the subject emerging out of the canvas and the finished product ends up more like a sculpture than I expected.

Although the construction is simple: layering plates, the building experience is pretty rewarding and contrary to my initial expectations, I had a good time assembling the two sets. There is definitely a charm to the stylized interpretation of these classic characters and creating two universally recognisable characters from a pile of shapes is a fun little building experience.

I have to admit, the sets are a bit expensive for what they are. A couple extra rare parts, a printed tile with a Disney logo or maybe even a minifig complementary to the subject matter might improve the desirability of these sets, but they do have their charm.

When the theme was announced last year, there was speculation that these Brick Sketches would become the new Brickheadz but they haven’t quite taken off in the same way, which is a bit of a shame. Brickheadz all share a standardised formula which is easily customisable allowing anyone to try their hand at creating their own unique figure whereas the similarities between each Brick Sketch end at their initial white frames - very much a blank canvas, with less-clear rules dictating how to create your own sketch, which is great for some but might prove a hurdle for less experienced builders. The instruction booklet from the Bonsai released earlier this year included images to inspire builders to create their own original trees; it would have been nice to see something like that in the set as we did get a nice foreword from Chris himself. That said, you can find about 50 original Brick Sketch designs on Chris’ Flickr page if you’re in need of inspiration.

I enjoyed building the Brick Sketches and my time with the sets inspired me to try my hand at creating a sketch of my own design. 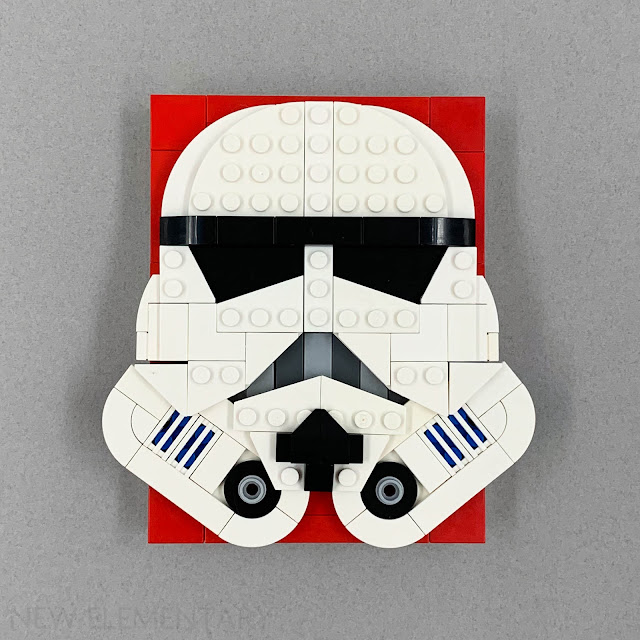 Naturally, I gravitated towards Star Wars and set about building a stormtrooper. Although quite different subject matter, the instructions of the Mickey and Minnie sets helped inform the construction of my sketch: they really got me thinking about recreating the helmet one layer at a time.

I’m a bit concerned that my helmet spills out from the canvas a little too much- it ended up a little bigger than I intended- but this was a fun little experiment building in this new genre. Hopefully we’ll see a more masterful version from Chris and the LEGO Group sometime in the future. 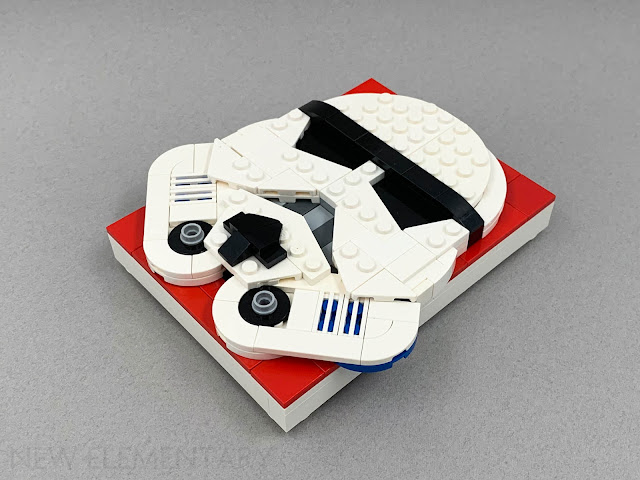