Tim Goddard (@tim_goddard928) gets inspired by a 2020 LEGO® City set today, 60263 Ocean Mini-Submarine – or rather, one of its massive parts: 44665. The products in this article were provided for free by LEGO; the author's opinions are not biased by this.

The LEGO Group has a long and glorious history of underwater themes, whether fantastical like Aquazone or more contemporary – like a LEGO® City subtheme of sets. Indeed, in 2020 we once again journeyed underwater with the Deep Sea Explorers sets which have the tagline ‘Supporting National Geographic Explorers’.  This seems to mean some cool aquatic animals and a light-touch pro-environmental feel. LEGO Friends also took part in this collaboration in 2020 with some jungle themed sets which also came with some nice, somewhat cuter animals. 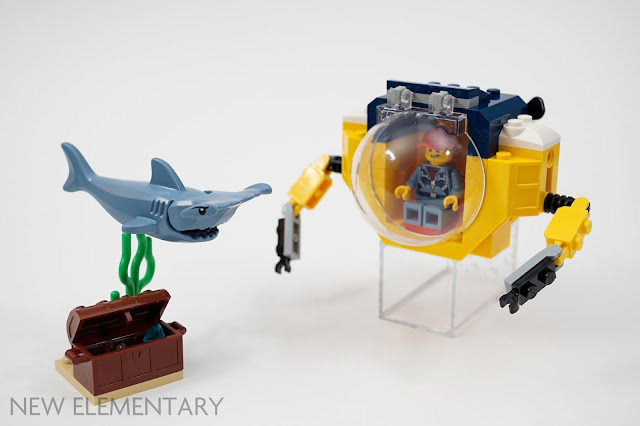 60263 Ocean Mini-Submarine is the smallest of the range and falls into the 4+ age mark, a bracket which used to be called Juniors and is designed for those who are ready to leave swallow-proof DUPLO behind and tentatively begin their System journey. 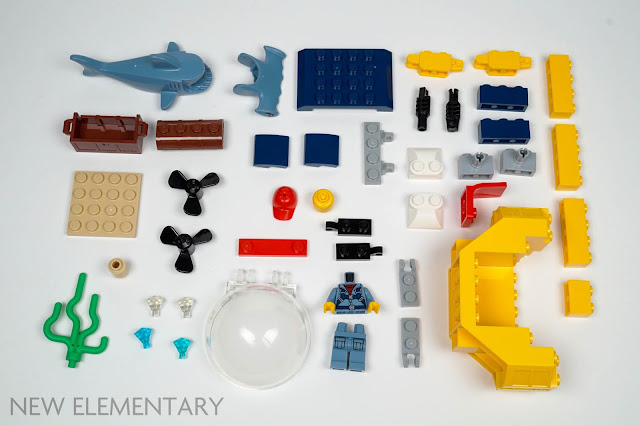 It is indeed a straightforward set, the very antithesis of the Colosseum, with only 41 parts.

LEGO seems to be deliberately diversifying its range at the moment and I think this can only be a good thing. Appealing to as wide a range of builders as possible makes economic sense and will give younger fans a foothold into an ever growing portfolio of sets many of which seem to be getting more complicated and expensive every year. This is not a new phenomenon of course but it feels like there is a more deliberate guiding hand in place now to ensure there are sets to cater to as wide a range of potential builders as possible. 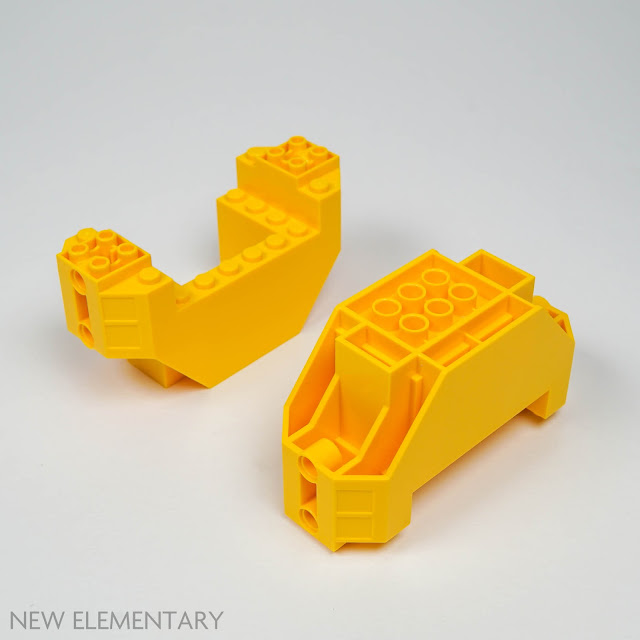 You may be wondering why New Elementary is reviewing such a small set for young builders. There was one part that piqued my interest: the catchily named Brick Special 4 x 10 x 4 - Plane Bottom (44665). I shall call it the Big Torso, because when I first looked at it, that is what it immediately suggested to me. It is exclusive in Bright Yellow/ Yellow (6299783) in this set and has so far appeared in two other similarly simple sets: 2019’s 75237 TIE Fighter Attack in Medium Stone Grey/ Light Bluish Gray (6253093) and in 2020’s 76149 The Menace of Mysterio in Bright Green (6295118).

Its name indicates it is intended to be part of a plane but to date this has never been the case; this set and the TIE fighter use it for other vehicles. The Mysterio set sort of uses it for a torso for a squat robot with wheels (but I do not believe it has achieved its 'torso potential' so far). This strongly suggests LEGO designed the element for broader purposes rather than for a specific usage. I am sure the Big Torso was designed specially for 4+ sets, allowing young builders to skip the tedious part of building a structural base and get straight to connecting more interesting functions and details. 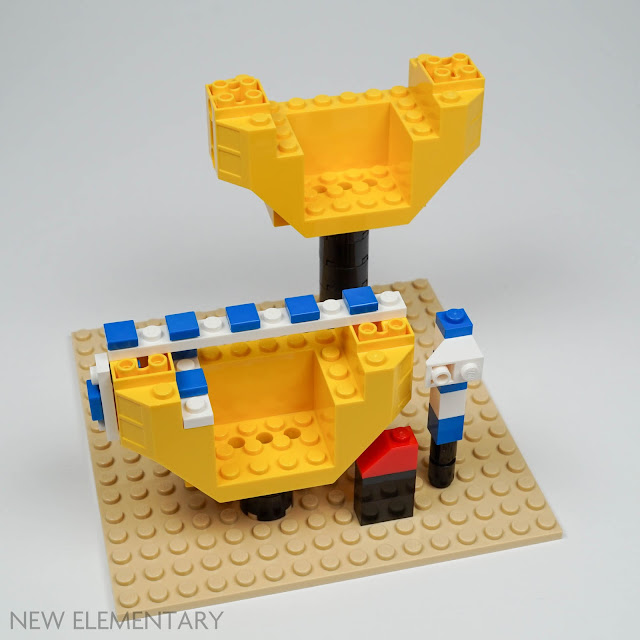 It is 4 modules deep by 10 modules wide (not 12 as the TLG name erroneously suggests) and seems to be 4⅓ bricks high i.e. 4 bricks and a plate (not 4 as the name suggests).

The angles around the ‘shoulders’ are 45 degrees. The tapering angle towards the bottom is 50 degrees, a rare but not unprecedented angle; the Duplo roof part (31030) uses this angle although I do not think there will be many people who take advantage of this match.

A lot of the underside, where angles are present, is hollow and does not offer many connection opportunities although a piece with two studs will slide in upside down and hold in the ‘armpit’.

There are pairs of Technic pin holes on either side, where arms and such can be attached. 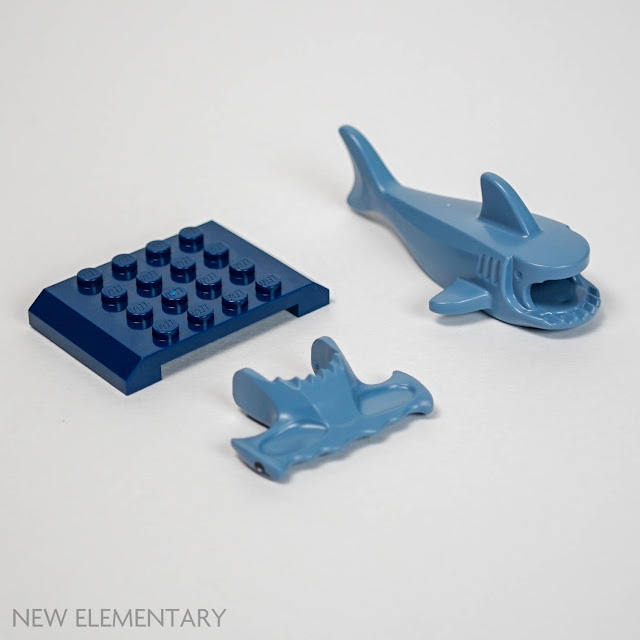 None of the other parts in the set are exclusive. The rarest are:

My brain had a bit of a problem with the sand blue hammerhead shark. I grew up with the Pirate line featuring dark grey sharks, and until I actually held this one in my hand my childhood brain insisted it was dark grey.

We AFOLs love to talk about colour inconsistencies in parts and I came across an interesting anomaly in this set. There are two Rock 1 x 1 Jewel 24 Facet in Trans-Light Blue (4119482 | 30153) in the set and one is clearly darker than the other. 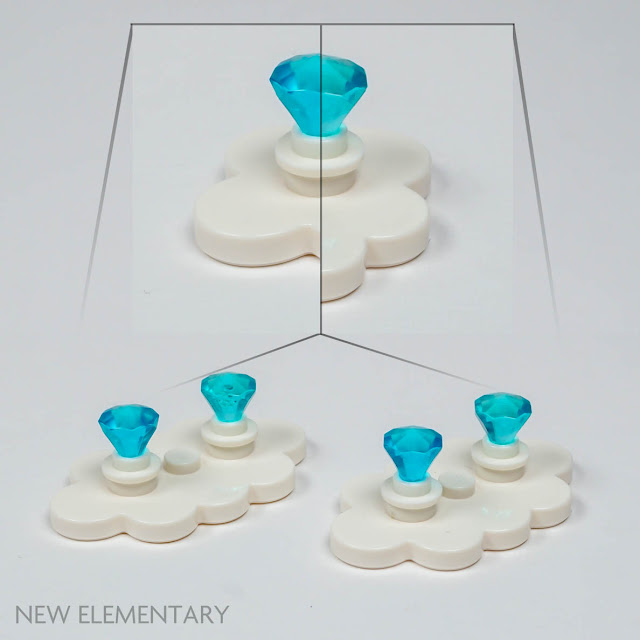 New Elementary ordered me two copies to build with, so I had enough parts to build with and the same colour difference was also in the second set. The lighter of the two colours is more consistent with other parts in my collection, so it might be a different plastic material used, or it could just be batch variation within the tolerances LEGO allows. For parts such as these jewels this is no major issue as it means more variation in your treasure but I have used them as engine glows or eyes, where it would be a bit more of an issue.

The build and design of 60263 Ocean Mini-Submarine

There is really not a lot to say about the build, it could not be much more straightforward! Which fulfils the brief. 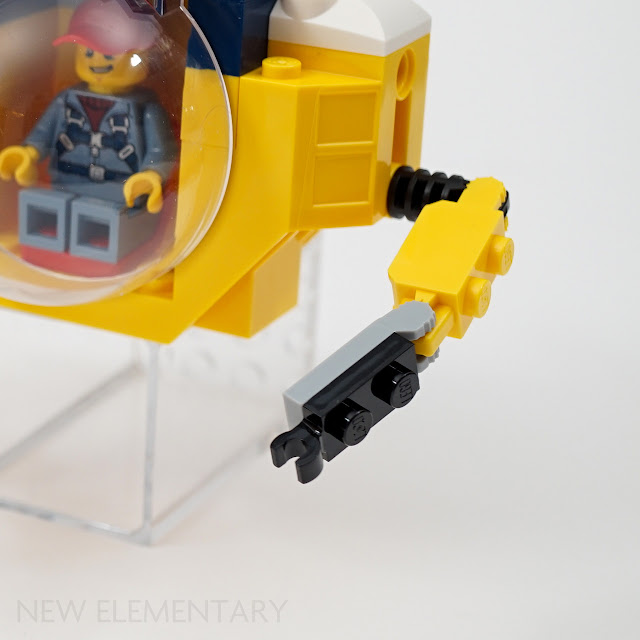 The design is similarly simple but I do think the claws on the end of the arms are a bit lacklustre; the grey click hinge just stands out a bit too much. I understand that the construction needs to be simple and robust but it could look better. 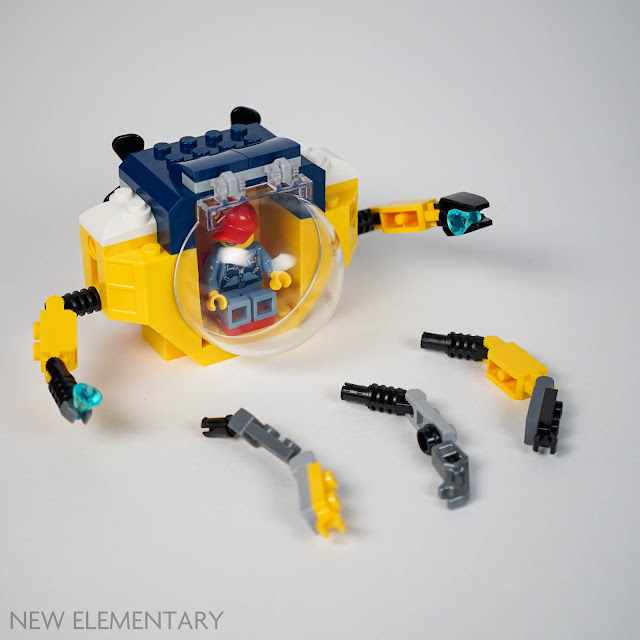 Here are a few other options I came up with, none of which increase the overall piece count. Of course these may not all get through LEGO quality control, which is even higher for the 4+ age mark; these are just a few examples to show something not quite so jarring in appearance.

One other thing about the design: it features two of my pet hates in sets: obvious gaps around the cockpit, and the poor pilot has no controls! Given the nature of the set I think these things can be forgiven though. Overall this set is a solid entry point for children and I am sure most will not give a second thought to the points I have nitpicked over.

It seemed worthwhile to use the Big Torso in a new build to explore it a bit more. Normally I dismiss large parts as they can prove restrictive to use in MOCs but this one appealed to me. The subtle relief detail on the sides reminds me of the old tipper bucket (818) and adds interest. It also has some interesting angles. 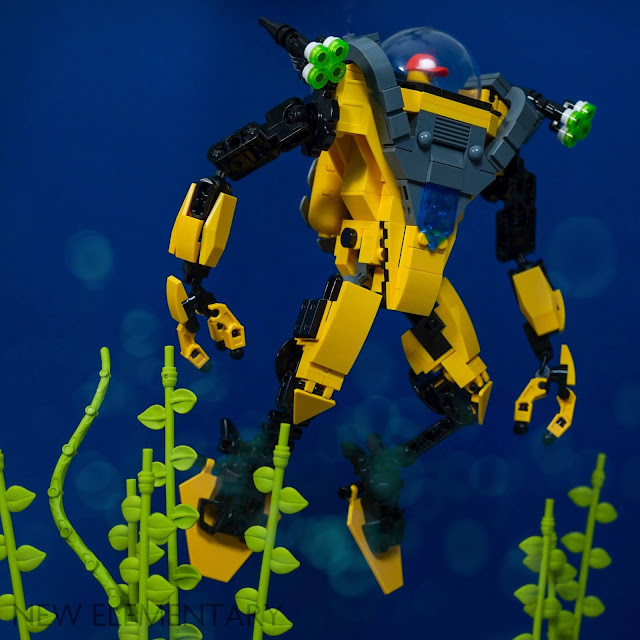 I decided on an underwater mech, to tie in with the set design, and to use it as the torso it was destined to be in my eyes.

The shape of the mech extends the taper of the torso as well as playing off its shape. The 4 Technic holes are made use of, to attach arms and two spotlights. 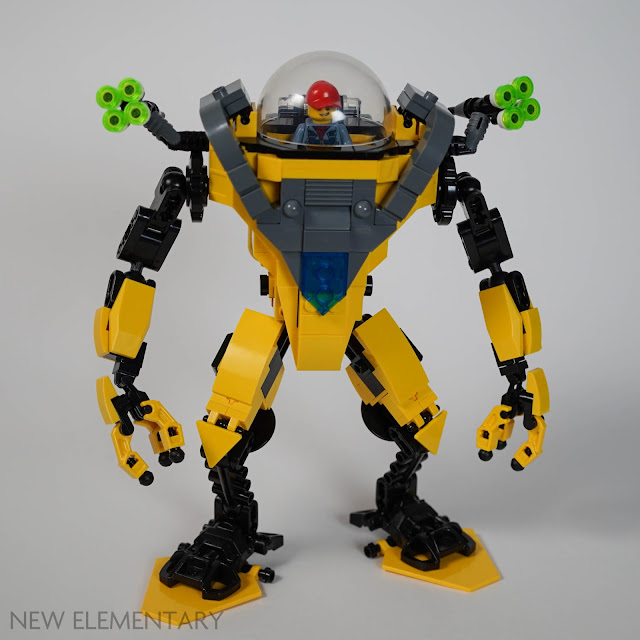 The same dome and pilot are present from the set but he now has some controls and no gaping spaces for water to gush in.

I thought some flippers were also in order; not something you see on mechs very often. 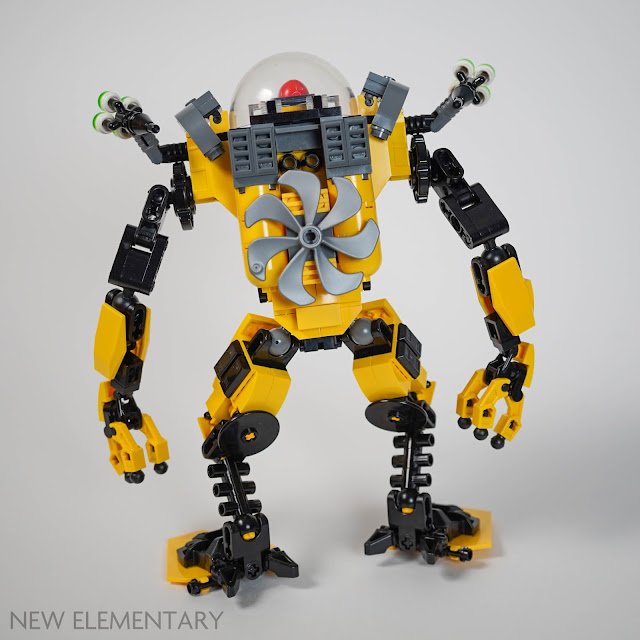 Posted by: Admin Posted on 2/22/2021 02:32:00 am
Email ThisBlogThis!Share to TwitterShare to FacebookShare to Pinterest
Labels: City, MOC, Set review