I was laying the groundwork for a little trap there. If (like me) you thought heck, I'd just buy them on BrickLink at a fraction of that price, you'd (like me) have been wrong. Clearly I didn't feel like sleeping tonight as I've just spent 45 minutes calculating the part-out value of that inventory on BrickLink. The results surprised me:


About $15 of that is accounted for by the six White 8X8 Plates, but that's it for very expensive inclusions. (See the end of this article for some more details on the top element costs.) Of course you'd also have to pay shipping on top, to several sellers, if you bought all these parts on BrickLink. So the large cost of the set is mostly just down to the large quantities of elements involved.

Perhaps my sneaky question, would you pay $US149.99 for these parts, actually comes down to do you want these specific parts in these quantities anyway?

But wait, there's more. No not a set of six steak knives but 21050 comes with a "272-page inspiration guidebook with tips and techniques" which will no doubt be beautifully done, as all other booklets in the Architecture series have been. You get a glimpse here on the box art, but Miro78 has kept his MISB so we'll have to wait to see just how nice and inspiring the book is.

Perhaps rather sadly, what excited me even more than the booklet are the little trays you get! These totally take me back to my youth. So much better than bags!

So you do get more than just a 'parts pack' with 21050. You get an experience, and a play concept that is pure and true to the very early days of LEGO. I'm not clutching at straws here - that's really important. And perhaps even a breath of fresh air in this era of 'hand-holding' instructions with no alternate models pictured, and endless licensed Themes full of custom parts. I'd love to sit down with a thousand basic elements and build some white buildings.

LEGO tried out the same concept 50 years ago with their Architecture sets in 1962 (see picture, from a display in LEGO Ideas House), and in 1963 released a wholly different System of parts called Modulex, which was aimed at professional architects. Neither lasted. I don't see 21050 being any kind of massive hit with AFOLs (though please comment with your thoughts), but it will be perfect for teenagers and those fresh out of their Dark Age - or about to come out of it! - who have an interest in Architecture. Or Hoth.

Would you like to see more parts packs of this scale as official releases? I'd be very happy to see the return of the classic Supplementary Pack! Some further large Architecture Studio packs would be great, perhaps without the glossy booklet and at a lower price point and containing other popular neutral tones.

Click to see all Miro78's pics of 21050 Architecture Studio. And finally here's the screengrab I mentioned earlier of the top elements by Total Value - this was done in Brickstore software. 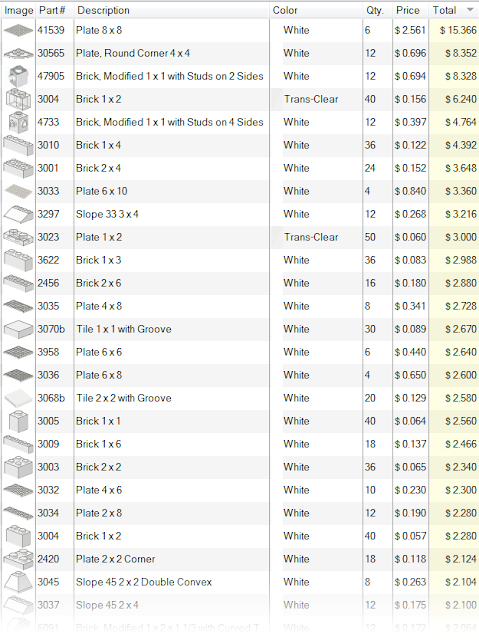