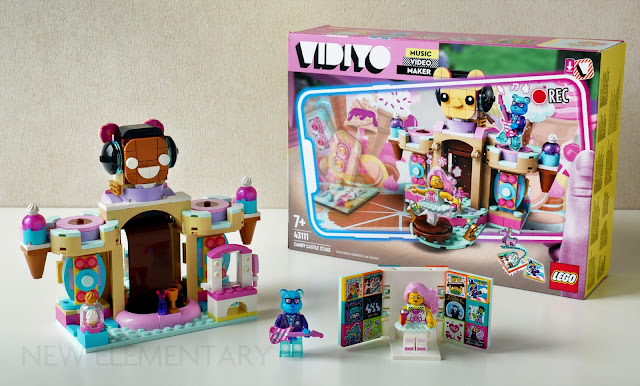 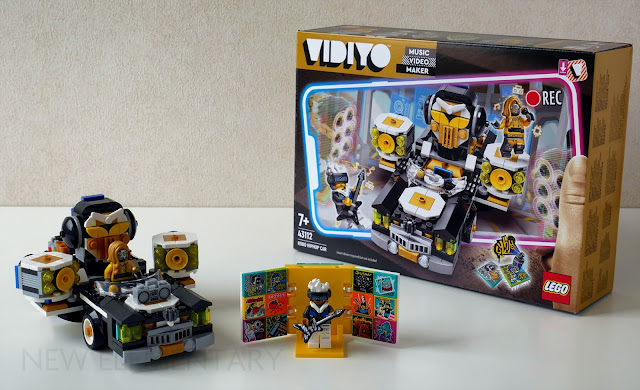 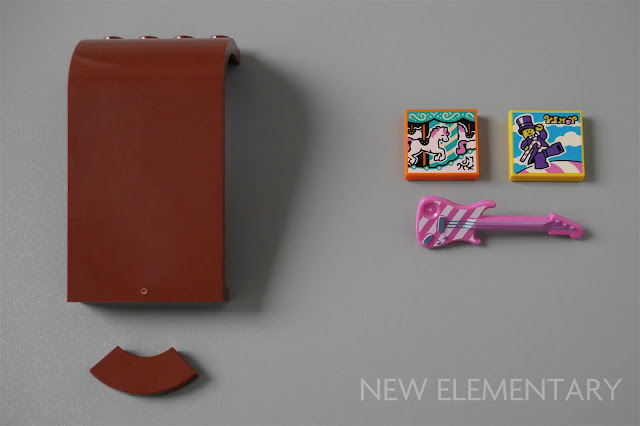 There are two re-colours included in the set:

My review of the VIDIYO Beat Boxes shows that each minifigure in them gets two unique BeatBits. However, the minifigures in these sets have just one each. In this case: 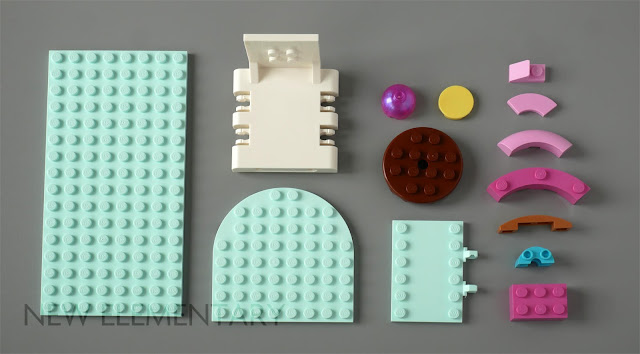 Considering it is such a small set, the Candy Castle contains a large selection of elements in rare colours: 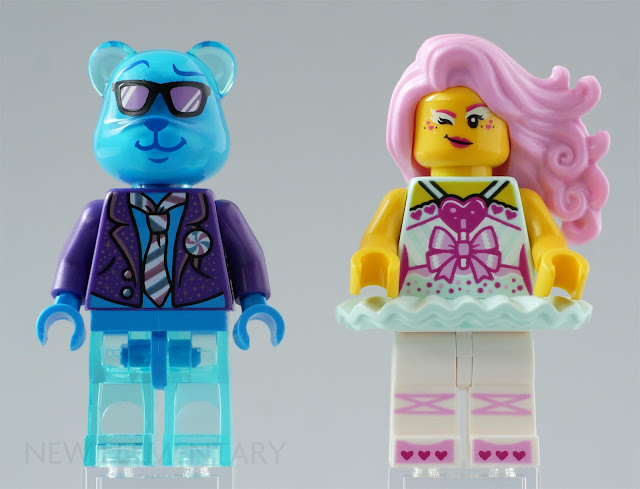 The minifigure parts in these characters are all unique to this set. 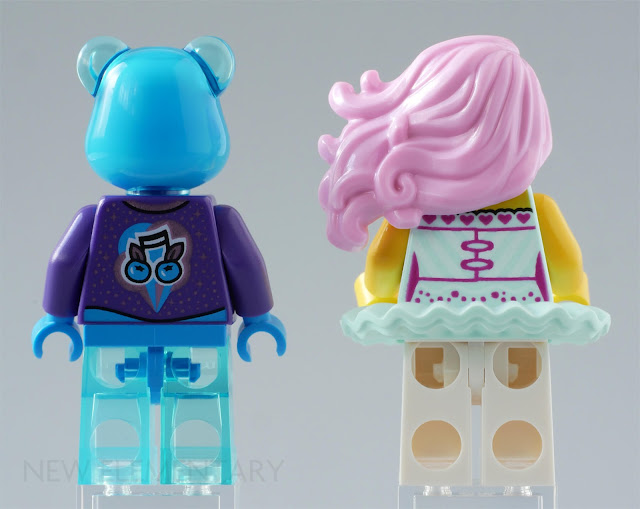 As with the other offerings in the VIDIYO theme, the minifigures have some lovely printing on front and rear. They comprise the following elements.

As you may be able to tell from the photos, my Blue-Beary actually has two slightly different trans light blue colours for left and right legs. TLG changed the formulation of this colour slightly a while back, and some AFOLs (me included!) have been annoyed to find that the older, slightly more turquoise version (Bear’s right leg) is less milky than the newer bluer example (Bear’s left leg). Sites like Bricklink do not distinguish the two variants but they are easy enough to spot if you look closely side by side. It’s a bit of a shame my Bear has mix and match legs on the same minifigure! 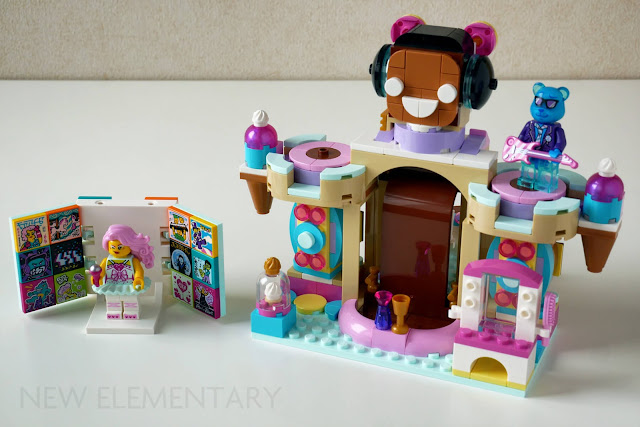 The build is pretty straightforward, as can be expected for a 7+ age classification, There is a minimal amount of SNOT techniques employed - mostly in the construction of the two twirling speaker stacks and the rotating head on top. Both sides of the play set can be used in conjunction with the app for different augmented reality effects. I liked the chocolate fountain here, and the attractive gingerbread head above the two side stages. 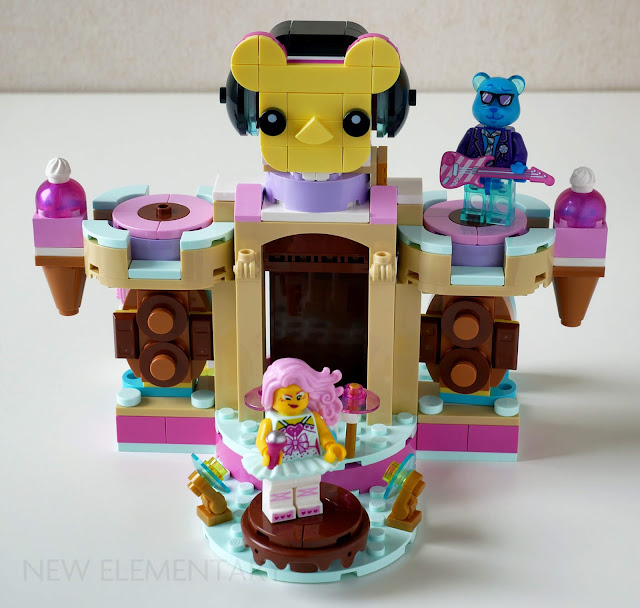 The two large ice cream cones at each side also rotate to reveal different colour patches for the app to recognise. The other side of the stage has a drum kit for Candy Ballerina to bash, when she is not singing atop her dripping chocolate fountain plinth. The set has a selection of soothing pastel hues, and includes a great selection of parts in rarer colours.

There are some lovely details in this playset, but I didn’t really want to keep it together in its original form. However, I could see those details making some excellent features for a little Minifigure Habitat for each of the main characters. 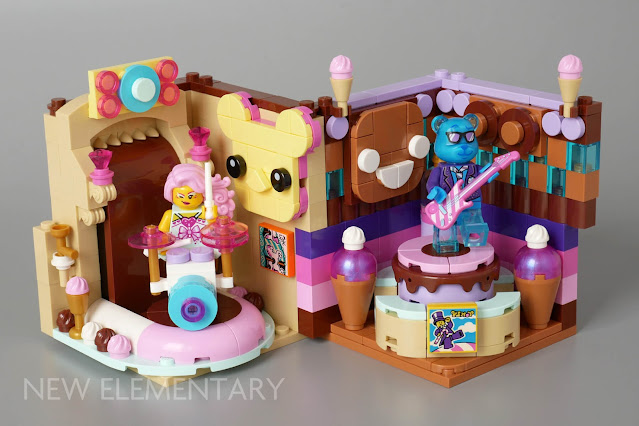 Adding some of my own pieces as well as those from the set, Candy Ballerina has of course inherited her drum kit, along with the chocolate waterfall, the bear head and a matching speaker above the flowing chocolate. Meanwhile, Blue-Beary Guitarist has a dripping chocolate topping for his stage, sitting inside one of the castle turrets. He’s also negotiated custody of those two huge ice cream cones and the gingerbread head. I love the Habitat format as you can cram an awful lot of detail into the 8x8 footprint. The features I have kept will remind me of the set they came from while still integrating easily with the ever-growing display of habitats in my LEGO room.

These elements are all new for 2021, some first appeared in the first wave of VIDIYO BeatBoxes or other sets from earlier in the year. 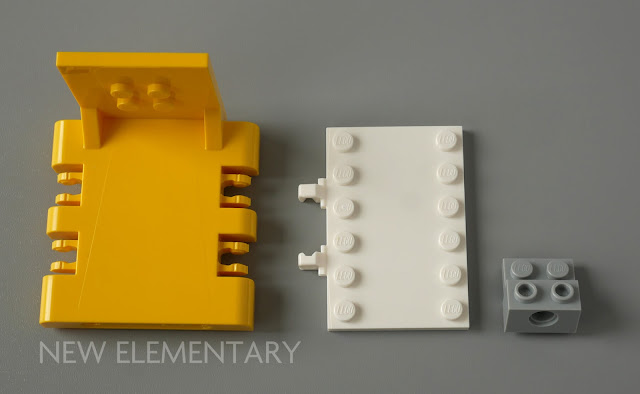 There are two recolours available in this inventory:

There are several printed items of note as well:

There are not so many rare elements in this set compared to the Candly Castle Stage, and their colours are somewhat more muted. They also inevitably lean heavily towards vehicle builds: 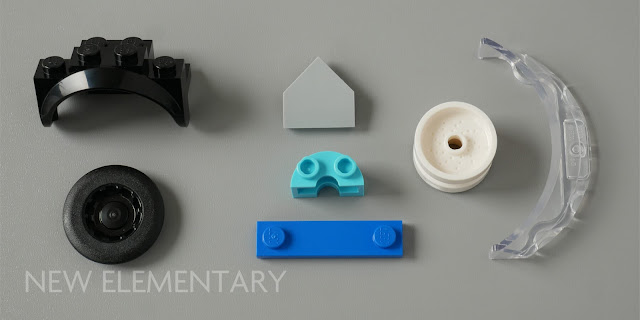 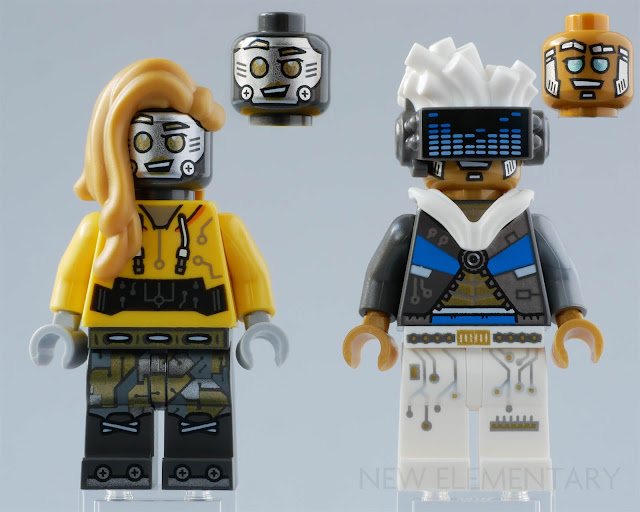 The minifigure parts in these characters are once again unique to this set. We are treated to some metallic gold and silver printing on both figures - which doesn’t show up as well in the photos as it does in real life, unfortunately. The heads are single-sided. 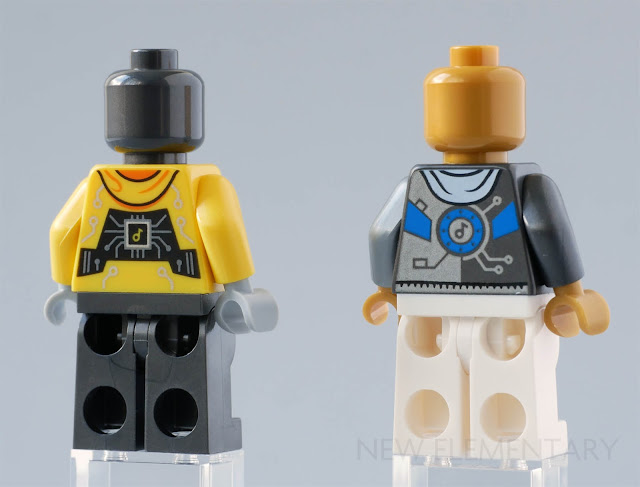 The minifigure elements are listed below. 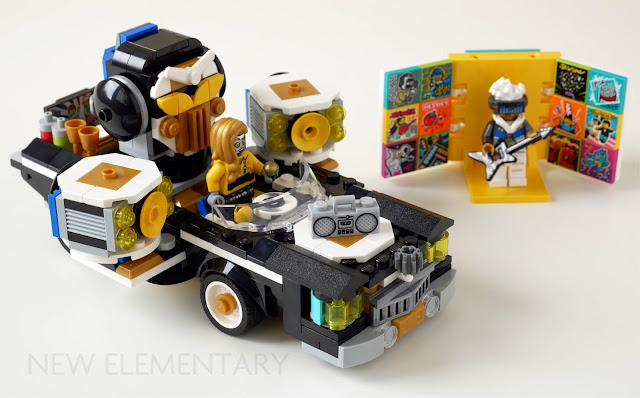 If I’m honest, I found this build a bit boring, but then I’m not really a car person or in the 7+ target demographic. I do like the big, ostentatious front grille very much, and it certainly has the potential to be an excellent limo, but I think they missed a trick by not having it able to transform into a better car somehow. 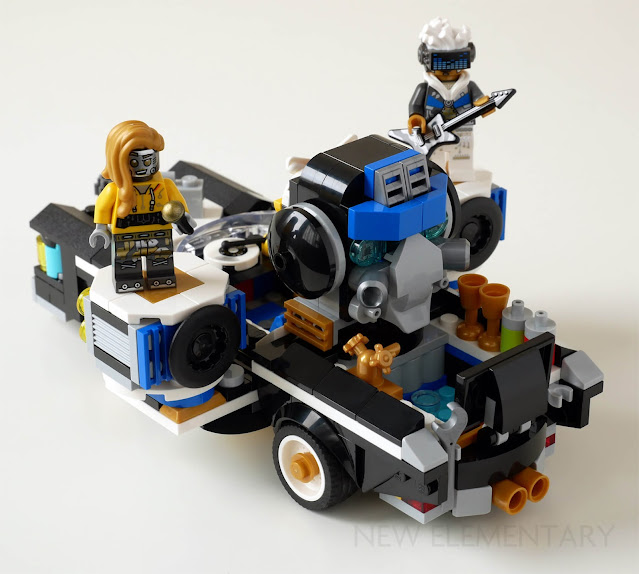 As well as the two outrigger stages on either side, the rear of the vehicle has a jacuzzi with bar, but it is overshadowed somewhat by the massive robot head in the middle of the car. I prefer the other side which normally faces front, which is far less menacing! 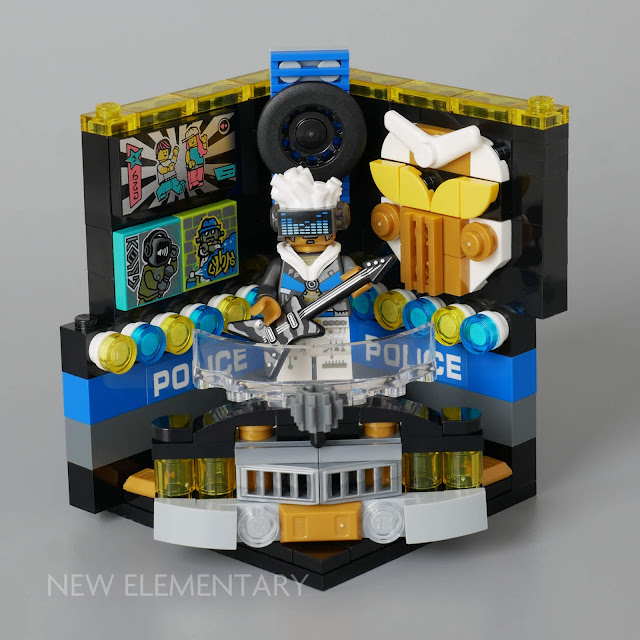 As my LEGO City is mainly water-bound and has few roads, I decided I didn’t need another vehicle and just kept the essence of the car to provide a nice bit of stage set on which Bass-Bot can perform. I added plenty of my own pieces, but he retains that less-threatening of the buildable heads, a big speaker and both BeatBits from this set. I have other plans for Sing-Bot, so I didn’t make another habitat for them. 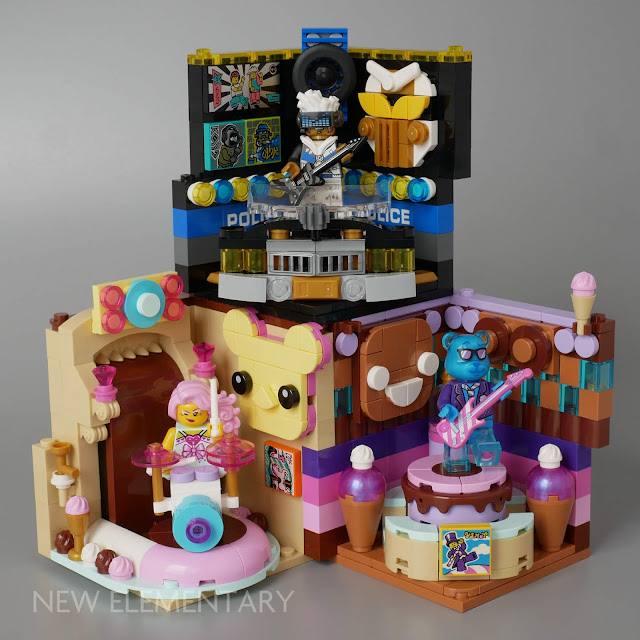 I’m sure you will ask, so here’s an image of all three Habitats stacked up together. I’m certainly not going to make a Habitat for each and every VIDIYO character, but I’m gathering quite a collection and the band will look great when they are all finished.

Both sets provide decent value for money at their price point. Personally I found Candy Castle Stage more appealing, with many interesting pieces in rarer colours, giving AFOLs great potential for MOCs. The car was less interesting but I’m sure it will be popular with folks who are not so keen on the cutesy colours of the Castle. MOCing potential of the parts is definitely biased towards vehicles here, but will likely have less appeal to the generalist.

The Castle and the Car both provide us with some more quirky and highly detailed minifigures which have good quality prints, unique elements and new moulds for their accessories. I was a little disappointed that my version of Blue-Beary Guitarist came with non-matching legs, as left and right seemed to be moulded from the two different variations of trans light blue plastic. I could understand them perhaps being different from one copy of the set to another, but this mismatch is definitely a point deducted from TLG’s normally excellent quality control.

Posted by: Admin Posted on 9/02/2021 08:25:00 am
Email ThisBlogThis!Share to TwitterShare to FacebookShare to Pinterest
Labels: LEGO® VIDIYO™, MOC, Set review