Caz Mockett (BlockHeadUK) takes a look at a 2020 LEGO® Disney set today, 43187 Rapunzel’s Tower. She takes a special look at the new swing piece before using parts from the set in her own creations! Buying this set? Consider using our affiliate links: UK LEGO Shop | UK Amazon | USA LEGO Shop | USA Amazon | Australia LEGO Shop, for other countries 'Change Region'. New Elementary may get a commission. The products in this article were provided for free by LEGO; the author's opinions are not biased by this. 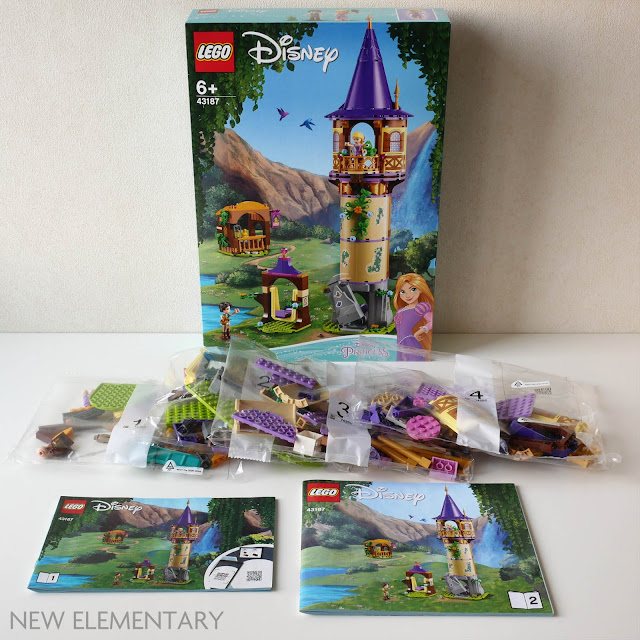 43187 Rapunzel’s Tower is part of the LEGO® Disney theme, featuring Princess Rapunzel and Flynn Rider and Rapunzel’s cute little chameleon, Pascal, stars of the movie Tangled. The set is aimed at the 6+ age group and, when built, comprises the huge prison tower for Rapunzel, a garden swing and the Snuggly Duckling Inn. Let’s take a closer look at its unique and rare parts. 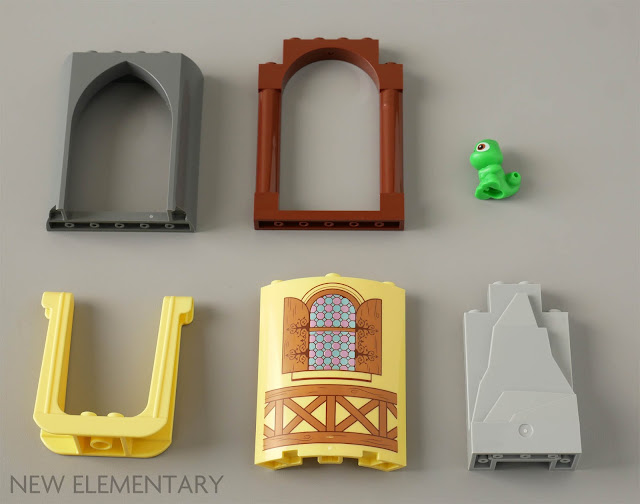 These elements are currently unique to this set: 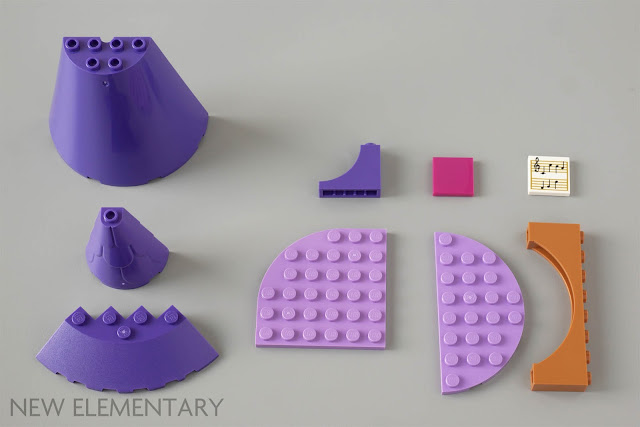 The set also includes a few elements which are hard to find in other releases: 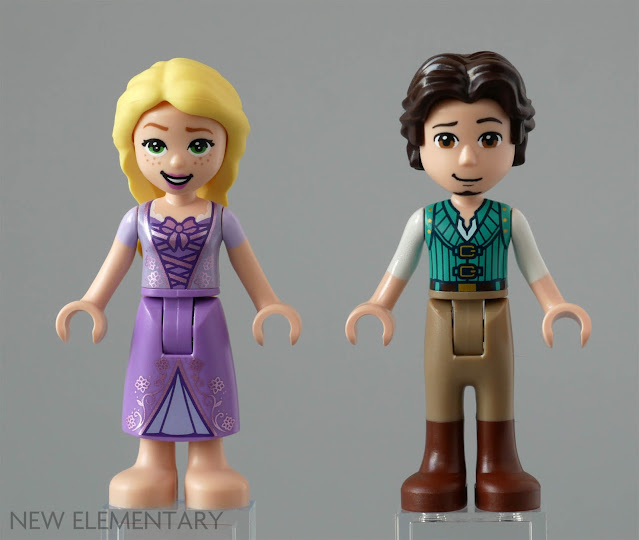 The two minidolls in this set are the eponymous heroine Rapunzel, and the rakish ruffian Flynn Rider. They both have nicely detailed clothing and some unique parts. Rapunzel’s long yellow hair is fairly common; her head, torso and skirt/legs are currently unique to this set, but will soon additionally appear in the previously-mentioned Rapunzel’s Boat polybag:

Flynn’s components are unique to this set, apart from his legs which have only appeared in one other release in 2014: 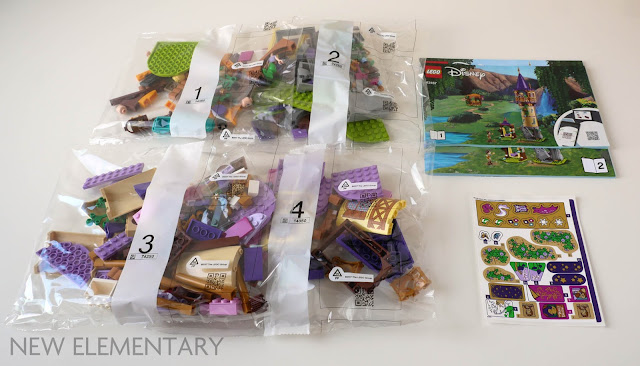 The set arrives in four numbered bags, with two instruction booklets and a sheet of stickers. The first book has you build The Snuggly Duckling tavern and Rapunzel’s swing from bags 1 and half of bag 2, while the tower is built from the remaining bags, detailed in the second booklet. 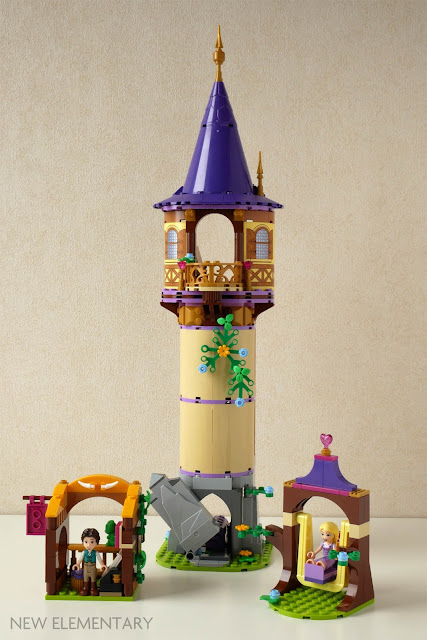 With its 6+ intended age range, there are no earth-shattering techniques, but we do see a few bricks with studs on the side appear around the base of the top floor of the tower, mainly to achieve some ornate gold decorations below the balcony. 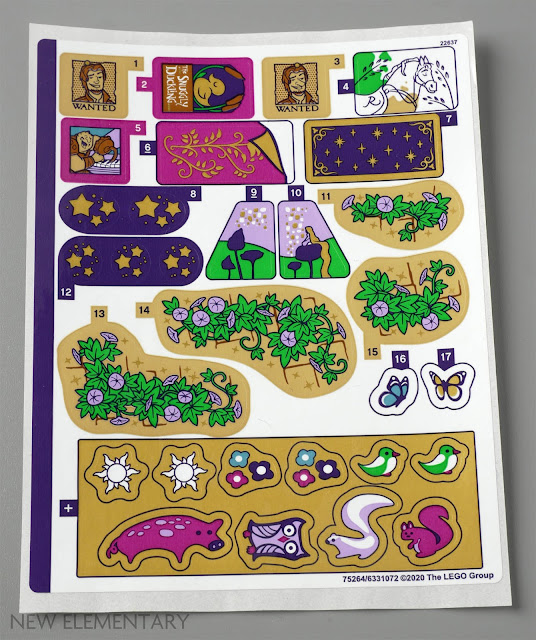 I opted not to apply the stickers this time, as I felt it would limit the use of some pieces in MOCs, particularly the light bluish grey rock pieces and large tan quarter cylinders. Some may be useful in other contexts in the future.

The most obvious play feature is of course Rapunzel’s swing, which moves smoothly with very little friction - little surprise since the pivot point does not actually attach to anything, but merely rests on top of the two pins which stick out of the 1x2 bricks just under the arch. We will take a closer look at it in a moment. 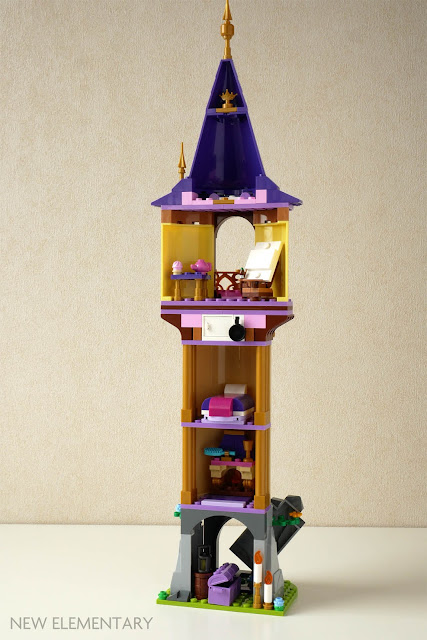 As is the case with many LEGO buildings, the back is open for ease of access during play. The four floors of the tower each have a few accessories to populate them. The front rock face at the base tilts to one side to reveal a cave hiding a treasure chest and a barrel with a lantern on it.

The next floor up has a hairbrush and goblet on the mantelpiece above a roaring fire. Rapunzel’s bedroom sits on the next floor while the top room, with balcony, contains paints with an easel and a table with teapot and cake on it. 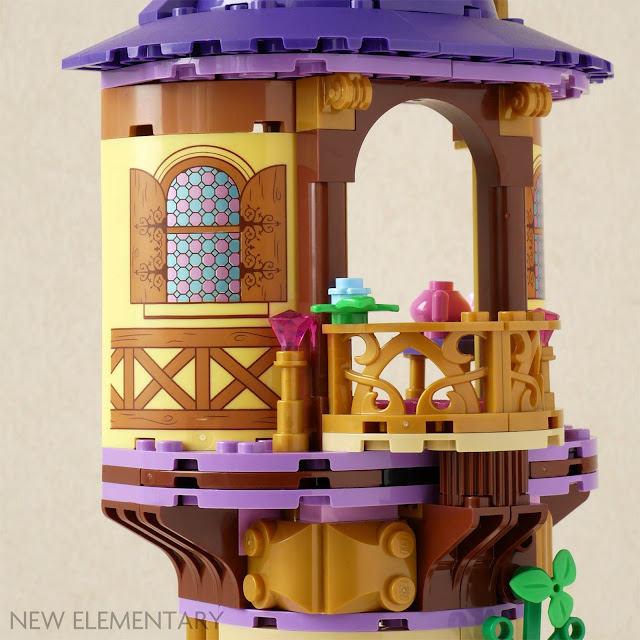 I do like the printed cylinder pieces on each side of the top of the tower. Their stained glass windows are particularly lovely, with a slight metallic sheen.

Before showing you what the set inspired me to build of my own, I thought I would take a closer look at the geometry of the swing piece, which is the catchily-titled “Plate Special Swing 6 x 2 x 5 1/3". It has only appeared in one other set from 2020. 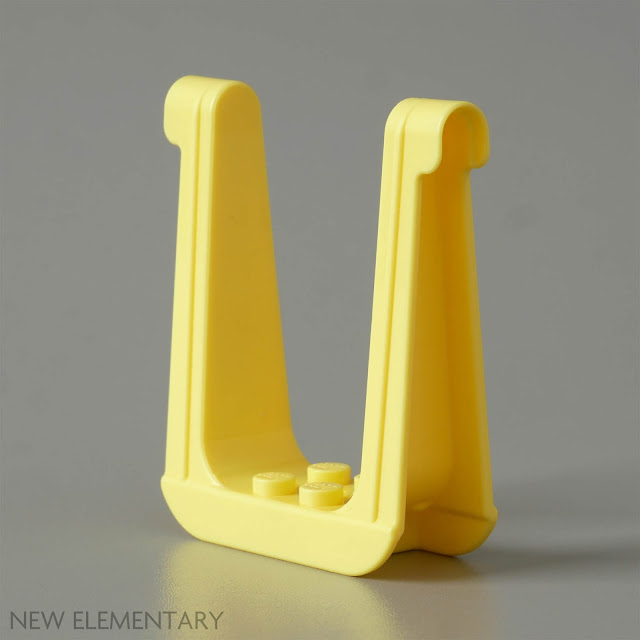 The basic U-shape is formed with the edges “folded over” to give strength while reducing the volume of plastic required. The biggest disappointment I found was that the pivot points don’t actually have any kind of System attachment. The space underneath the rounded top is just a fraction bigger than a Technic pin, and so just it rests on the pins which stick out of the support structure, purely by gravity. I found this very frustrating because if it had a proper pin hole at the top, it would be an awful lot more versatile for use in MOCs. I honestly can’t see any functional reason why this would not have been achievable or desirable. 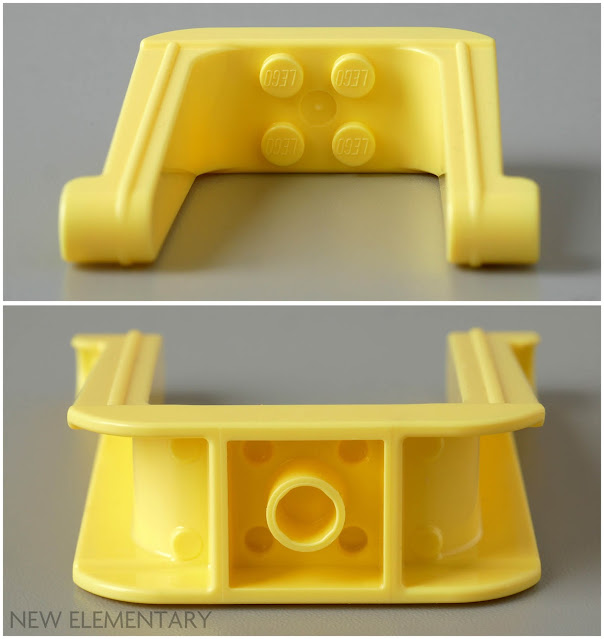 Moving on to the System-compatible areas, there are four studs arranged in a 2x2 pattern in the centre of the seat, with corresponding anti-studs below. 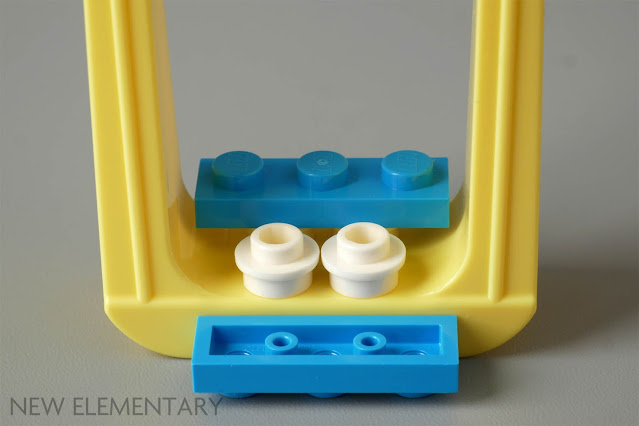 If you want to attach bricks to fill the maximum width possible in the middle of the U, this can be achieved by using four round hollow studs with two 1x3 plates centred on top. This gives a 2x3 platform to build on. 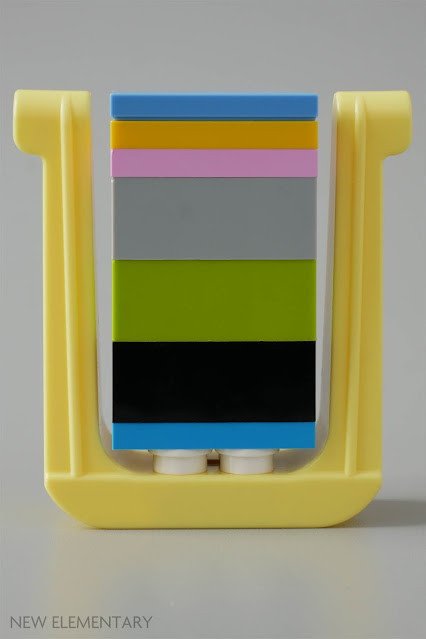 Stacking up the filler bricks, we see that the central section is 3 modules wide and 4 ⅓  modules high - not including the four round studs at the bottom, where the width is not the full 3 modules across. 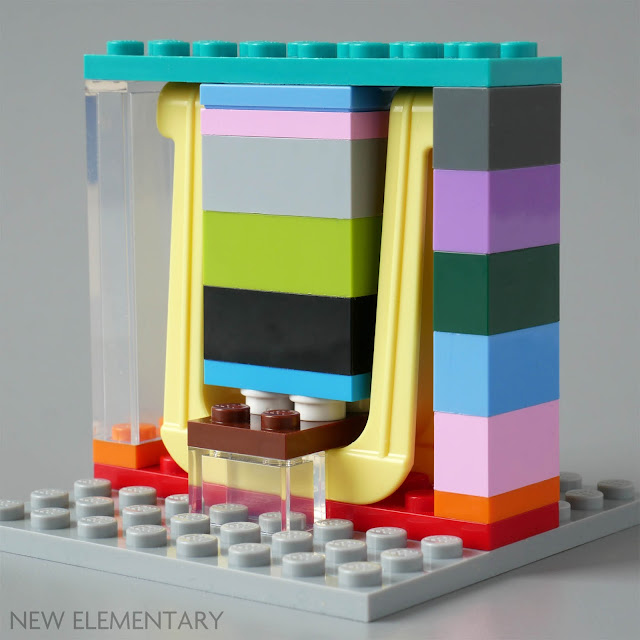 Stacking bricks around the outside to fully enclose the element shows that it can sit flush on top of exposed studs underneath, and while the enclosure does need to be 5 ⅓ modules high, 2 modules deep and 6 modules wide, the swing does not fully occupy this volume. Filling these gaps would be extremely difficult, I suspect.

If you wanted to mount it on the side of SNOT bricks, the geometry gets even more messy with the arms of the U reaching about 6 ½ modules wide. This view also clearly shows the taper of the arms.

My first inclination when I got the set was to try to use the swing piece as the front forks of some sort of vehicle, but having had a proper look at the element I realised that the lack of any kind of connection point at the tops of the arms were going to scupper that idea. But the fork-like shape did remind me of the huge eye stalks of a snail. 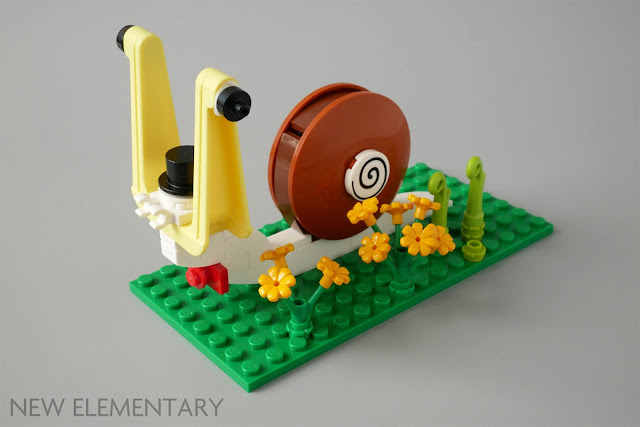 Sammy The Snail is a rather dapper creature, who sports a red bowtie around his neck,  along with his fetching top hat. His eyes are rather precariously attached by means of winding a small Technic rubber band around the long side of a Technic half-pin, which gives just enough extra thickness and friction to push into the top of the arms. The smaller side of the pin then attaches to an “inkwell” piece to give him a beady stare. I mounted his head on a 1x2 jumper so that his eye stalks can swivel around for a better view.

The huge purple conical roof construction of the tower also rang some bells in my mind, as it suggested the shape of a witch’s hat. 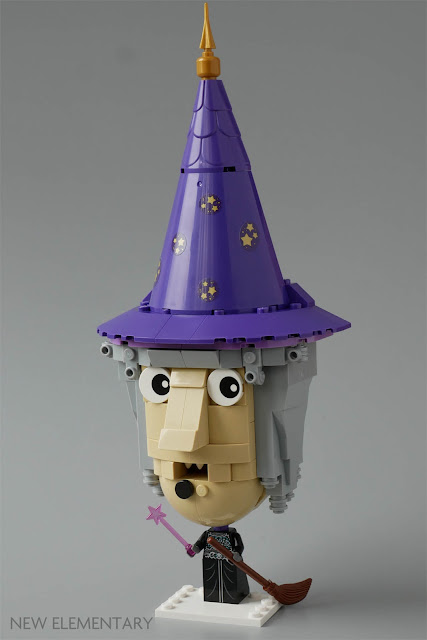 I started with the hat and then found two 3x3 quarter round curved slope bricks from my collection for a chin. Two of the grey LURPs had the look of hair about them - especially when mounted upside down. After a little bit of work to shape the rest of the features, her warty-chinned head was complete. A few of the stars from the sticker sheet, applied to the outside of her hat, added the finishing touches.

Originally I was going to leave it at that, and mount the head on a transparent 1x2x5 brick so that it appeared to be floating in mid air, but then I had a crazy idea about just sticking the whole bonce on top of a regular minifigure, making it much more of a caricature. I used a skirt piece which has been in my collection for some time and a black torso with rather nice silver printing from one of Nehmaar Reem’s henchmen, acquired from the Hidden Side Mystery Castle. A broomstick and magic wand completes Edna’s ensemble. I get the feeling she is a bit of a softie at heart, and not at all evil.

That said, the four floors of the tower, swing and tavern, plus two minidoll figures give plenty of scope for role play of this classic fairytale for its intended audience.

The set has a handful of recoloured elements which will be of interest to a wider adult audience due to their more conventional palette, where these pieces had previously only been available in more whimsical colours.

If you are buying this set (or anything!) consider using our affiliate links: UK LEGO Shop | UK Amazon | USA LEGO Shop | USA Amazon | Australia LEGO Shop, for other countries 'Change Region'. New Elementary may get a commission.


All text and images are © New Elementary unless otherwise attributed.
Posted by: Admin Posted on 1/28/2021 12:17:00 pm
Email ThisBlogThis!Share to TwitterShare to FacebookShare to Pinterest
Labels: Disney, MOC, Set review