Aron Gerencser (Pohaturon) kicks off 2021 by reviewing a LEGO® Technic set available from today – 42123 McLaren Senna GTR™ – and then building something quite different with some of its parts! Buying this set? Consider using our affiliate links: UK LEGO Shop | USA LEGO Shop | Australia LEGO Shop, for other countries 'Change Region'. New Elementary may get a commission. The products in this article were provided for free by LEGO; the author's opinions are not biased by this.

Alongside really big licensed LEGO® Technic cars like the Chiron and the Sián are the smaller - but still sizeable - licensed cars intended to be more affordable. while still bringing accuracy and build quality that both kids and adult collectors will appreciate. 42123 McLaren Senna GTR is the latest of these cars. Let’s see if we have a champion on our hands, or if it should have made a pit-stop before primetime. 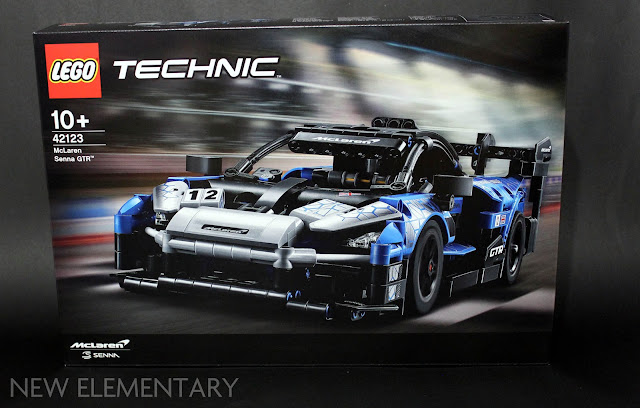 42123, to my surprise, comes with a bare selection of new and interesting parts, all of which are on the exterior, meaning we’ve spotted them back when the set was revealed. The inventory did provide one surprise, however it wasn’t a pleasant one.

The selection of exclusive parts we’re looking at comprises one new mould in two colours and five recolours. Everything else is common, presenting us with an interesting lack of a middleground – pieces are neither new nor exclusive, but some are noteworthy nonetheless. 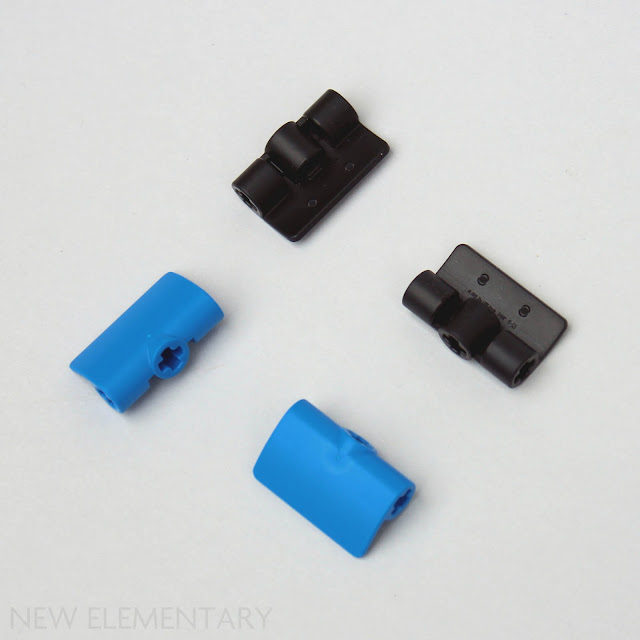 The piece features three axle holes, all of which are one module deep with a stopper at the end preventing you from pushing them any further. The lip is curved and thinner than a plate, matching the angle and dimensions of those found on Technic Panel Fairing #22 Very Small Smooth Side A (11947) and Side B (11946), with which it is intended to pair with. This cobination is used when building 42123’s spoiler. Moving on to recolours, first up we have one that will very likely stay exclusive to this set due to its specific print. The printed Shell 3X9X2, W/ 4.85 Hole, No. 1 in Blue with a left and right variant print (6335197/6335198 | 42531) is the first time we see the mould in this colour. These are the only printed pieces in the set, and it is very disappointing for builders that the versatility of a debut recolour is so hampered. On the best of days I am strongly on the side of Team Stickers because they’re optional and can be used on MOCs later on, but this is a particularly egregious example. In the past, some licensed sets have had printed elements mandated by the manufacturer, where they didn’t want brand-identifying iconography being applied by the customer messily. Here, however, the printed designs aren’t particularly tied to the McLaren brand - and even if they were, the same pattern is repeated on a number of stickers, so it being a print clearly isn’t a manufacturer requirement. Since the mudguard has more complex curvature than your typical slopes which do get stickered, I have to assume applying a sticker to this part was deemed too difficult for the target audience. It may seem nitpicky to some, but my overall opinion of this set would vastly improve if these parts weren’t printed. 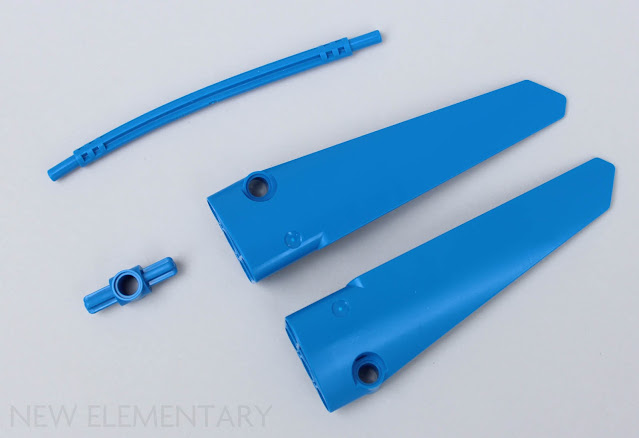 We get some other pieces appearing in blue for the first time. These include: 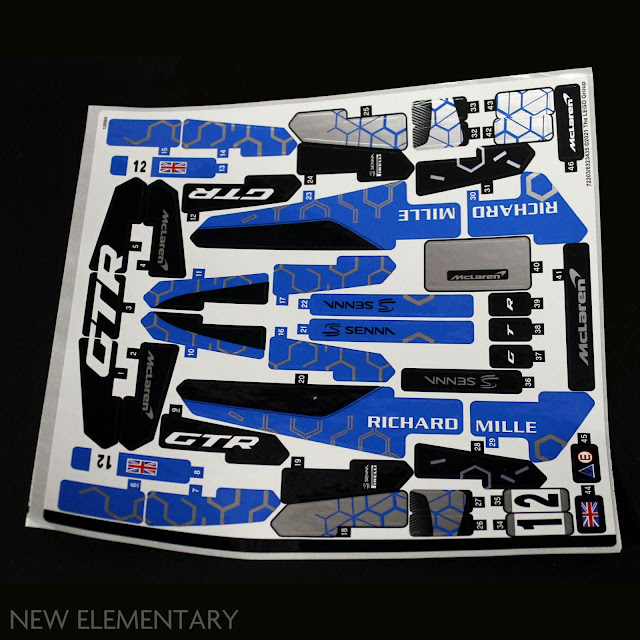 As mentioned there is also a sticker sheet included, with several featuring the fancy hexagonal “beehive” pattern seen on the printed mudguards.

The Senna GTR comes together over the course of three numbered bags. Builders familiar with Technic won’t find anything of particular note or novelty with the build itself - the last time I myself built a Technic set of comparable size was in 2016 when I put together 42063 BMW R 1200 GS Adventure, with the same colour scheme, incidentally - and even so nothing jumps out at me as a noteworthy solution or technique. 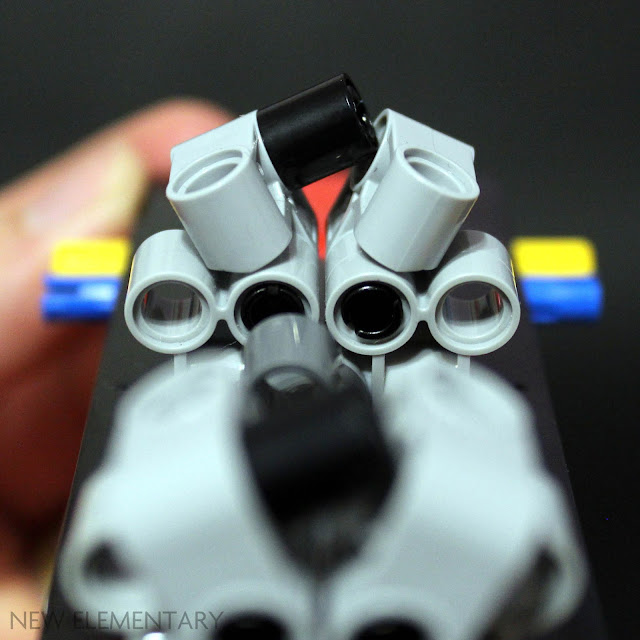 It isn’t until the end of bag 1 that anything of interest happens. Earlier when building the engine, some grooves in Technic connectors are exploited to achieve an angle. This technique was new to me, but after looking into other Technic sets I realized it has been used before.

As is to be expected, the first bag focuses on the structure and internal frame of the car, as well as laying the groundwork for the functions later on. Throughout the course of the bag, the frame is built in two large chunks that come together at the end with a very peculiar and slight angle achieved with some impressive LEGO math. The rest of the build, unfortunately, never gets this interesting again. 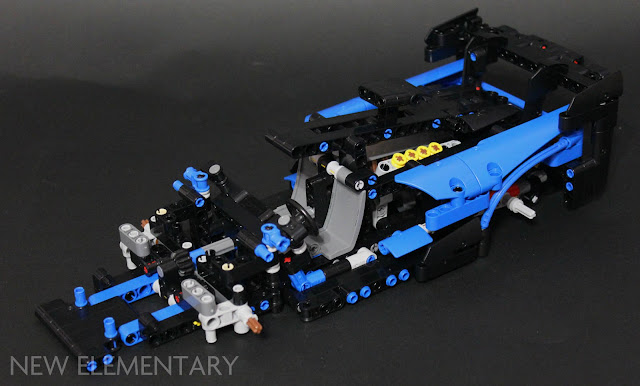 By the end of bag 2, we’re starting to see the shape of a car emerging from the beams and pins and axles and connectors, though it still looks barebone. The rear axle controls the engine, with the pistons popping in sequence when rolled. The hand-of-god steering mechanism also takes shape. 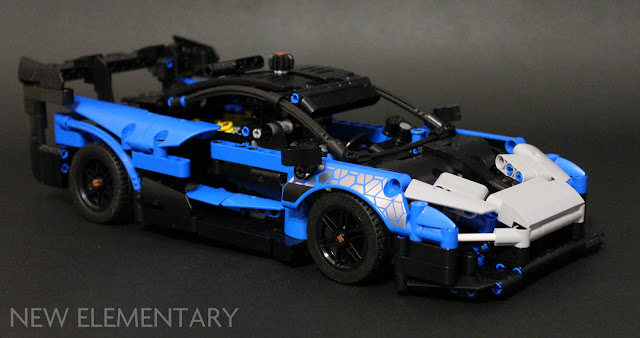 With bag 3, the build is completed. Aside from the previously mentioned hand-of-god steering and the engines, the only “function” the 42123 sports is opening gull-wing doors. The splash of grey on the hood breaks up the otherwise two-tone colour scheme, but the transition blatantly relies on applying the stickers to be organic. In order to maintain the versatility of the parts, I opted against using the stickers, however. 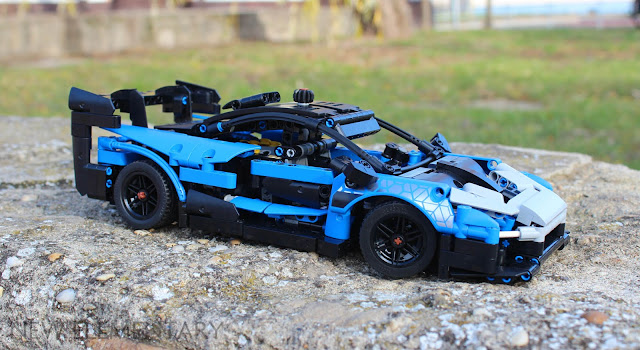 In general terms, the rear half of 42123 looks fantastic, but things fall apart near the front. It’s almost like the set was designed rear-to-front and by the time we reach the rear-view mirrors, the mojo runs out. If you’ve been collecting the Technic cars at this scale, it’ll fit right in as the Senna GTR is just 5 modules longer than 42093 Chevrolet Corvette ZR1, so it definitely won’t look out of place in a lineup.

Full disclosure: I’m not a ‘car guy’ - but when comparing the finished set to pictures of the real car, I wasn’t particularly impressed. Based on some comments I saw written by car guys, I wasn’t alone in this assessment. It certainly looks car-like. It even looks like a nice car, but is not exactly there when it comes to accuracy. So, if authenticity isn’t a strong suit, does it hold up in a vacuum? 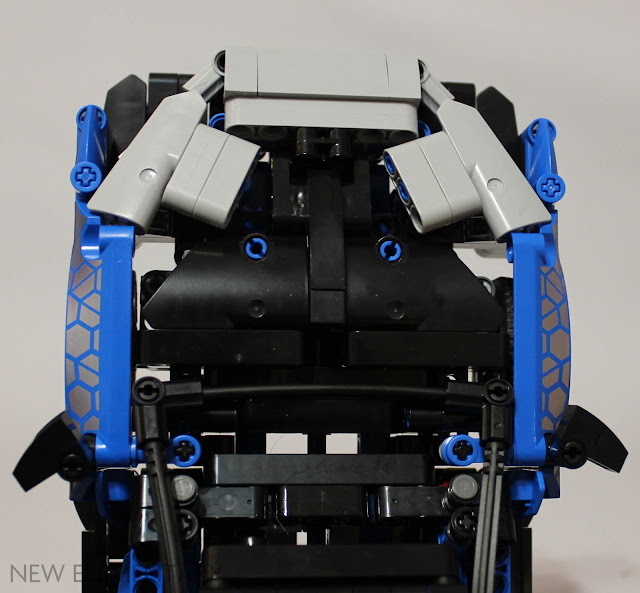 Well, not really! While building the front portion, I was constantly wondering when certain gaps will be filled, only to finish the build with said gaps remaining open. If looked at from the top down, you can see all the way through the car. I’m not unreasonable and realise that some gaps may be inevitable by virtue of the Technic System, but this is something that goes beyond that I feel. 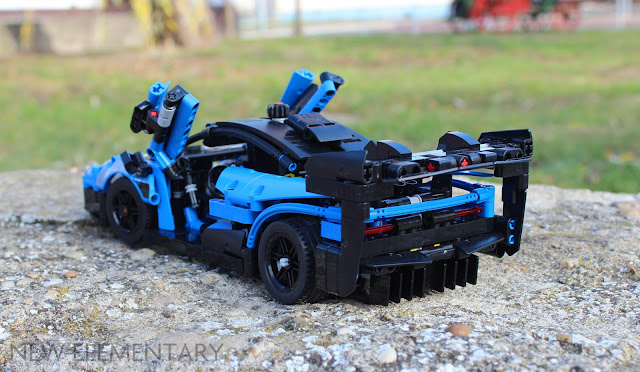 The shaping of the hood feels rather haphazard, and I’m not convinced stickers solve this issue. 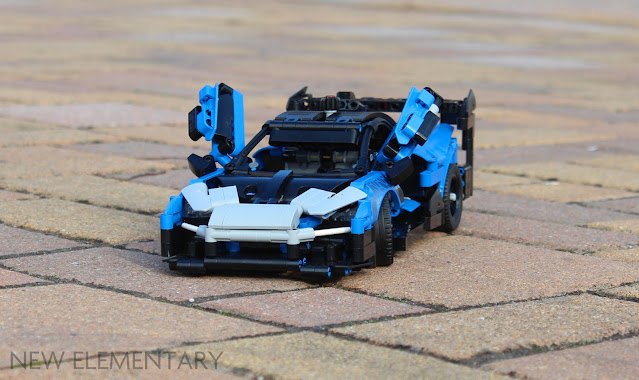 Since this is a Technic set, LEGO System parts are kept to an absolute minimum, which I totally get. Thing is, I’d have arranged things differently - the side skirt is built with tiles, plates and slopes. In a perfect world, this section would have instead been built by stacking multiples of the new 3 x 2 panel next to one another, achieving the exact same aesthetic while giving us more of this snazzy new mould to play with. This would then free up some “System budget” to use on the hood which is absolutely screaming for it. Tiles and slopes would have salvaged it, I’m sure.

Using the new parts from 42123: The Sidewinder

While the finished model unfortunately falls flat in a number of ways, the new pieces introduced by 42123 had me excited nonetheless, so I figured we can turn things around by using them in a MOC. My first instinct was to use the new 3 x 2 panel mould as a part of larger, smooth panel assemblies to showcase how it fits into this particular part family. 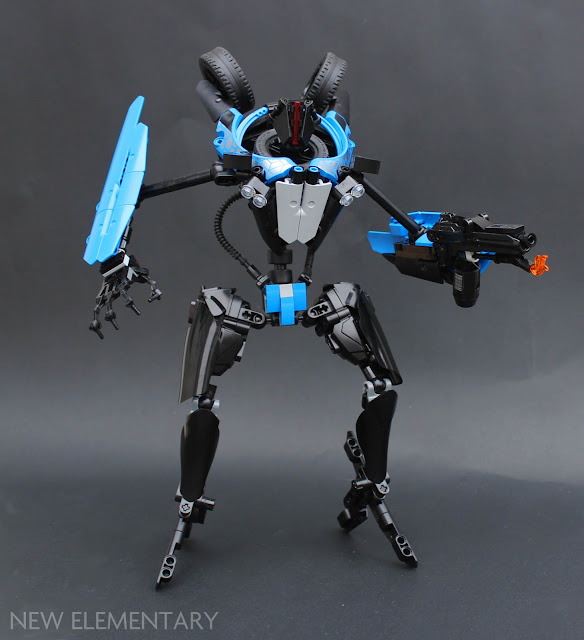 People tell me cars are cool. I’m sure they’re right to an extent, but robots are cooler. The basic idea that spawned this particular MOC was to take the design language that defines the Senna GTR, to draw upon its most iconic visual staples, and translate that into a bipedal robotic figure.

The mirrors are unchanged from the set, and connect in the same way and place via the new printed panels as they did on the finished model. The grey section on the chest is a callback to 42123’s own grey hood area, now with fewer gaps. It may not be a car, but thanks to the flamethrower it can burn rubber regardless.

42123 McLaren Senna GTR is tough to recommend. One could say that you need to be a big car enthusiast or McLaren fan to appreciate it, but those are also the demographics that would be most hung up on the inaccuracies. If you’re in it for the parts, the printing on the mudguards sours the affair a great deal. I don’t enjoy being this critical when it is clear that thought went into the engineering of the set itself, but when it doesn’t succeed at the specific things it set out to do, giving bonus points would feel disingenuous. 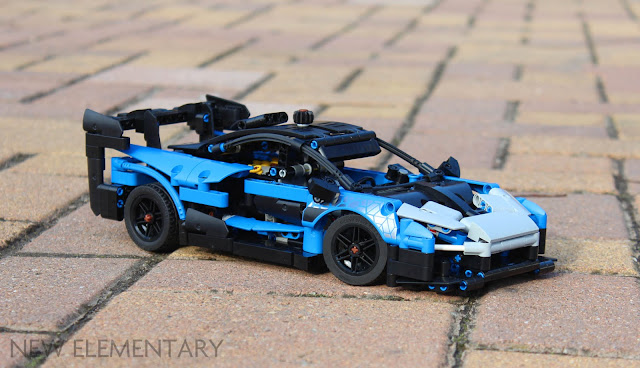 There’s a lot of potential on display. The parts are useful, the new mould fills an essential gap in the Technic panel part family, and the whole rear half of the completed model is beautiful. Unfortunately the printing and the bungled front section hit the set right where it hurts the most.


All text and images are © New Elementary unless otherwise attributed.
Admin: Tim Johnson Posted on 1/01/2021 11:22:00 am
Email ThisBlogThis!Share to TwitterShare to FacebookShare to Pinterest
Labels: MOC, Set review, Technic