Finnish LEGO® builder Eero Okkonen (now on Instagram!) kicks off his new series of articles with us today where he will look at unusual parts he likes to use in his models and reveals some techniques. 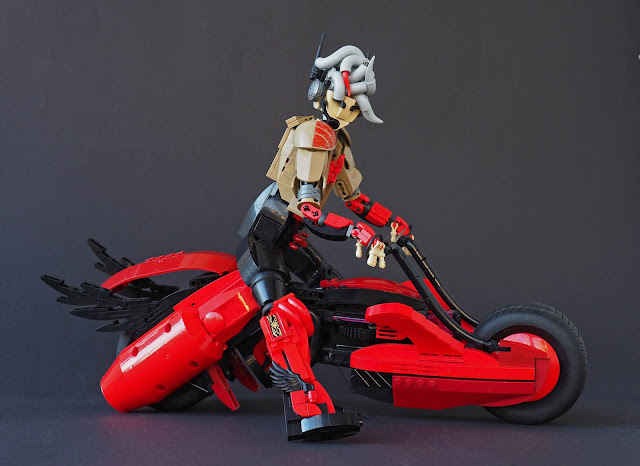 I thought it might be interesting to briefly present several LEGO® pieces I like to use in builds that are not necessarily rare but are maybe a bit forgotten, along with examples of older MOCs of mine. To kick things off, two parts from the early 2000s that sport gentle curves: Windscreen 9 x 3 x 1 2/3 Bubble Canopy and Wedge 4 x 3 Cut Back with Cutout. 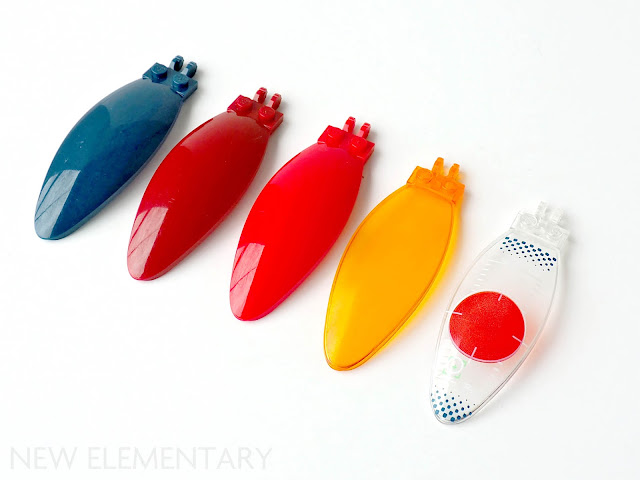 This long and thin bubble windscreen (47844) was introduced in the last wave of Alpha Team in 2004 and was in production until 2008. It was available both printed and unprinted; the printed versions feature a red area that was used for “scanning” other printed parts in the sets. The unprinted variant is available in 7 colours: Earth Blue/ Dark Blue, Dark Red, Bright Red/ Red, Transparent Bright Orange/ Trans-Orange are pictured above and there's also Bright Yellowish Green/ Lime, Transparent Fluorescent Blue/ Trans-Medium Blue and Transparent/ Trans-Clear. The latter is especially expensive as it was available only in the original 7783 Batcave from 2006. Interestingly, trans-orange was the only colour that was present in more than one set. 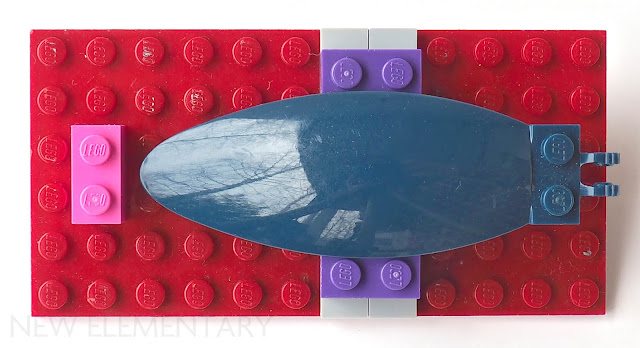 The piece is 9 modules long, 3 modules wide and 5 plates high at the end with the connector, though the height is hard to measure due to the curvature. It features a 1x2 plate with studs and antistuds and a female click-joint connection.

As a windscreen, it fits Windscreen 10 x 4 x 2 Curved with Bubble Cutout and Single Hinge Finger (47843) which is available in Sand Blue, White and Black.

The part itself feels very exclusive. Its smooth and aerodynamic oval shape can’t be achieved with any other piece; the feel mostly resembles some Constraction parts from the Star Wars buildable figures. However, 47844’s connection points are entirely System-based. To summarise: it’s long, has a tremendous shape and comes in a limited but very nice selection of colours! It also reflects light very well, gleaming elegantly.

People tend to say that building organic subjects is hard, as LEGO bricks are, well, bricks. We know that they are much more, and 47844 is a great example. In official sets it was first and foremost a windscreen but was also used in imaginative ways. 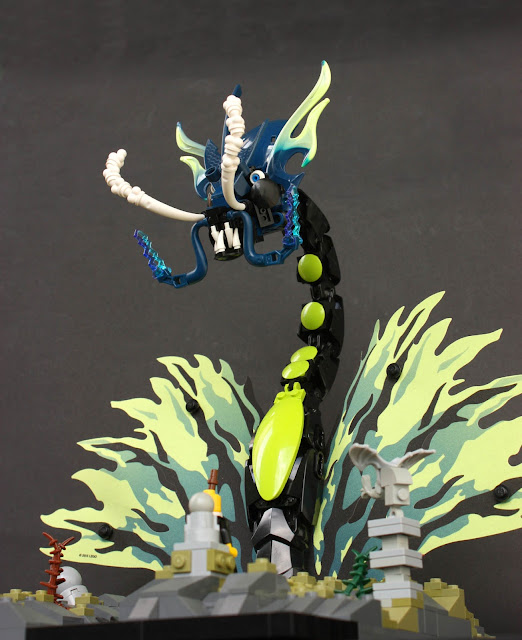 I’ve used it as a stomach section on a dragon in the small diorama Gale Serpent Arises from 2016. Its bright colour over black parts emphasises its shape, and the smooth convex surface echoes the boat studs above it. 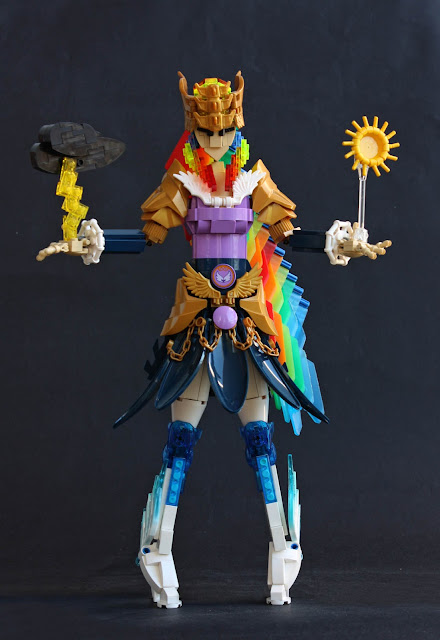 Cielan, from 2017, used a bunch of them as a skirt, this time utilising the concave side. 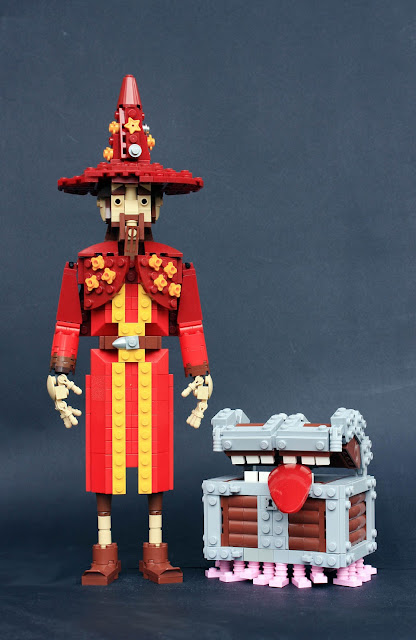 Rincewind’s Sapient Pearwood chest The Luggage, from Sir Terry Pratchett’s Discworld books, got its mahogany tongue from a dark red 47844. 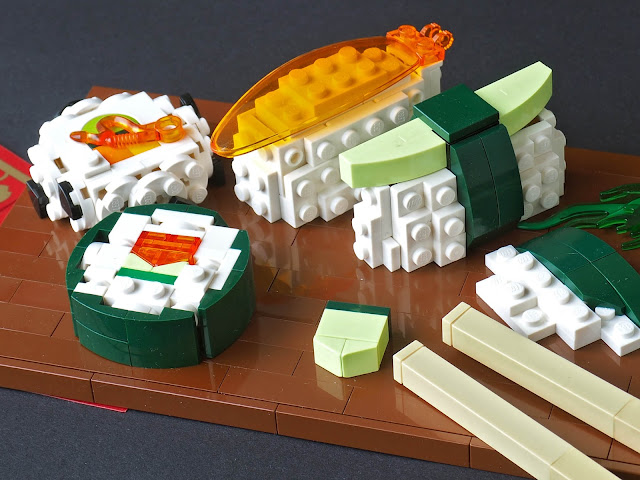 A trans-orange one was used as a slice of raw fish on Nigiri on a Sushi set, built in spring 2020. I had earlier used this colour for the fins of Carp Speeder in 2019, which you will see in a later article.

When building the bike for RESIST-BOISTEROUS IV in 2019 (pictured at the beginning of this article) I discovered the seamless connection between 47844 and Windscreen 10 x 6 x 2 Curved (45705). 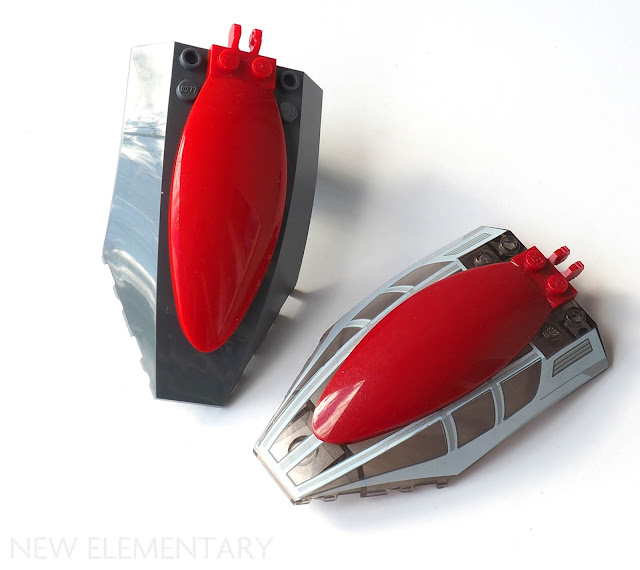 RESIST-BOISTEROUS IV also uses another curious piece, which we will discuss now. 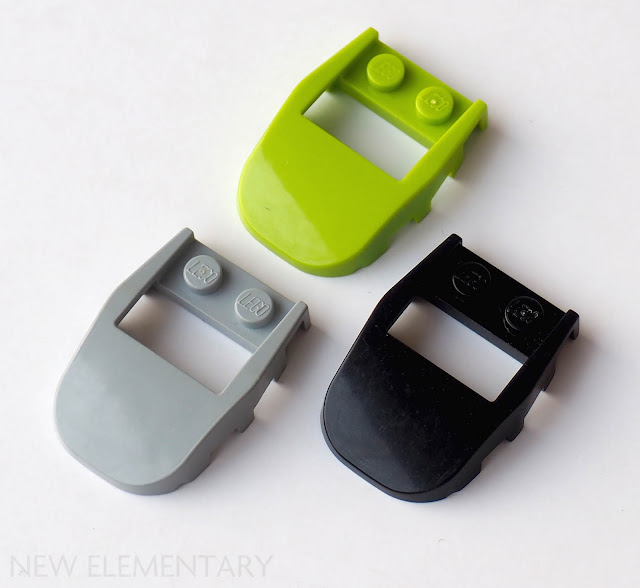 Wedge 4 x 3 Cut Back with Cutout was first used in 2005’s Racers cars, usually forming the mini-scale windscreen. It is available in Lime, Medium Stone Grey/ Light Bluish Gray, Black and (not pictured) also in Bright Yellow/ Yellow with printing. The grey one is curiously expensive – it comes only in one Tiny Turbos set from 2005, 8657 ATR 4. The piece’s last appearance was in the Mixels set 41520 Torts from 2014. 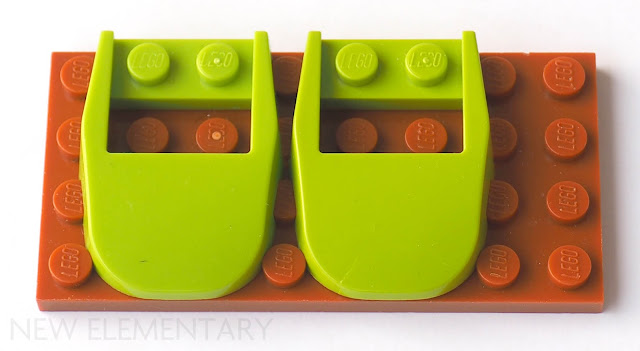 What makes 50948 interesting is its subtle curvature. It is two plates high at most and almost three modules wide, meaning that two placed side by side don’t touch each other. There’s a 1x2 hole in the middle... 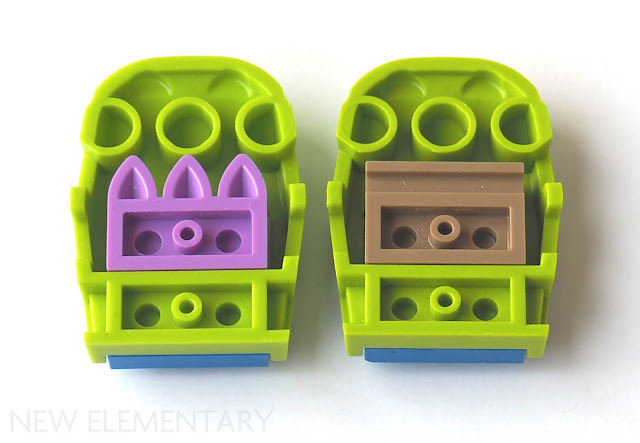 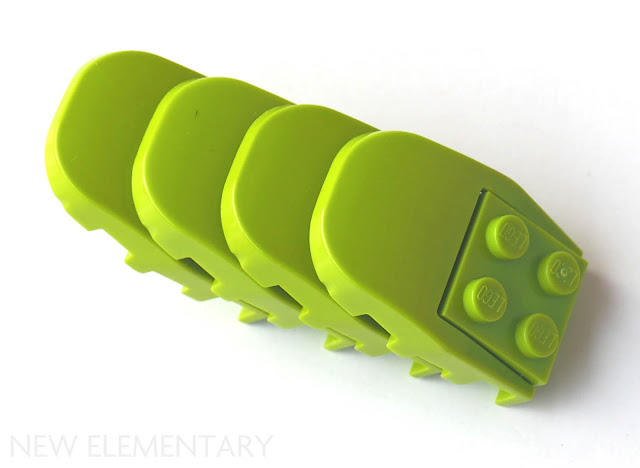 Interlaying these pieces creates a quite pleasant, armadillo-like pattern.

On RESIST-BOISTEROUS IV, 50948 was used on the sides of the lower torso to continue the subtle shape of upper legs. My most common application of them, however, is as shoes. Just ordinary, decent, sensible shoes. 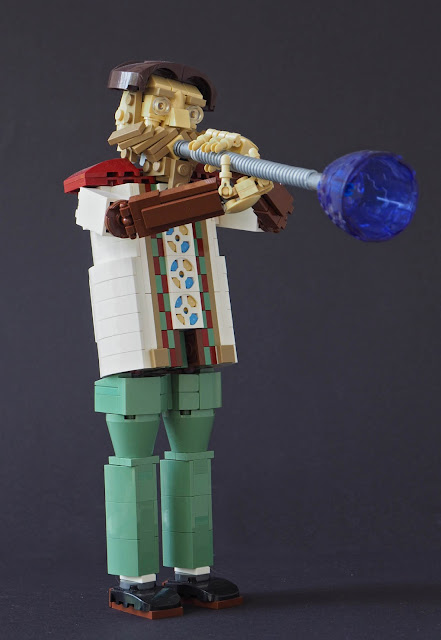 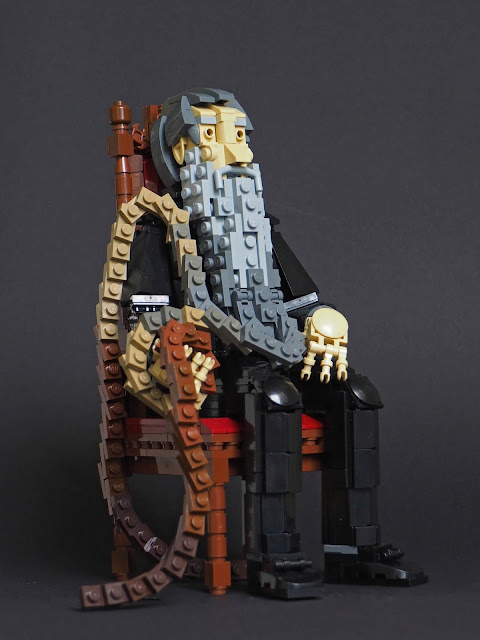 In my next article I will examine  LEGO elements that were introduced for cars that I have used in my models. 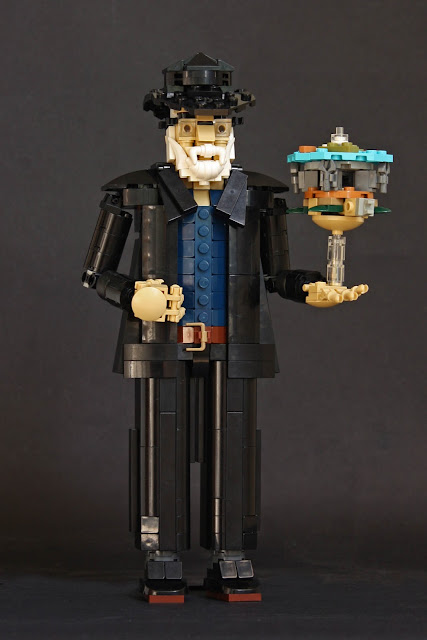 
All text and images are © New Elementary unless otherwise attributed.
Posted by: Admin Posted on 1/22/2021 10:41:00 am
Email ThisBlogThis!Share to TwitterShare to FacebookShare to Pinterest
Labels: CCBS, MOC, Old parts