You may recall Marinus Jasperse, Senior Designer on the LEGO® Element Design Team, from his recent article when he pulled apart a 1980s DUPLO phone! Following this, Tim Johnson caught up over a video call with Marinus in his 'home office', to gain a deeper insight into how the element designers at The LEGO Group are structured and operate. This transcript has been edited for clarity, readability and narrative flow. 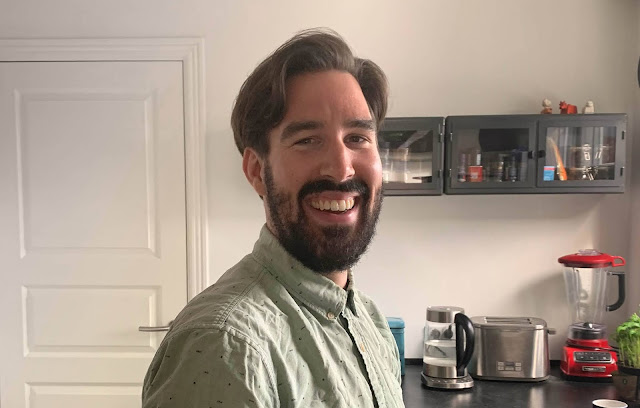 New Elementary: Hello, Marinus, thanks for your time this morning!

Marinus: Let me just start by saying, that is always very thorough research you guys do on elements. In some cases you even manage to surprise us like, “wow – there is a connection there!” So very, very thorough.

That's what we like to hear, we're hoping we're surprising people, especially TLG employees! So when did you begin at the LEGO Group and what has your journey there been?

I started in October 2015, in the Platform team. Back then they were developing the roller coaster track so I came half-way into that project and what an awesome project it was to start with, creating such a unique subsystem! I’m part of the Element Design Team too now; about a year ago I made the decision to move over and go a little more into Downstream.

What do you mean by Downstream?

The ‘normal’ development; just another iteration of an element. Let’s say we only ever did a 1x4 and now we’re going to make a 2x4: we know how to do that. We don’t need to figure out new connectors, so it can just go into Downstream. A new wig is Downstream, a new animal, a new wheel… but when we want to do, say, a new shooter we have to go to Frontend. It’s a process where we like to get a lot of knowledge in the beginning so that we are aware of all the technicalities before the product later enters Downstream. It is all about minimising risk and having the best quality possible.

Why did you move from Platform to Downstream?

Back in Platform we did a lot of big projects; really new stuff where we had to figure out basically everything. So you would typically work on a project for two years and then it would come out, which was very interesting but I really wanted to try something more fast-paced and get more elements out.

When we spoke to Karsten Juel Bunch, Director Specialist of Element Design & System Governance, back in May 2020 he said some changes were just about to come to the organisational structure of the department?

There used to be a team that was dedicated to DUPLO, and a team for sculpting animals, the Platform team and so on. All these teams of designers are still separate in terms of managerial function but now, we're all in the same ‘pool’, we work across all the areas. And that's really interesting, this has given us a lot more variety in our daily job. The Platform designers became part of this too. So now I think we're looking more into what the designer's personal interests and profiles are. “We have this task, who would be best equipped to do that task?” Some are more into designing and creating a wig or an animal, for instance; sculpting is a very specific set of skills. Others are more set up for ‘nitty gritty design’, like designing new functions.

What elements did you design in your time with Platform, I think the new gear wheels were one of them?

All the things we were doing were of course in collaboration, so I could never say “this is my element”. And that's still the case today, I'm just a very visible part of the Element Team now. The gear wheels were a great example of a good collaboration with Engineering. We, as designers, got a task from the Creative Lead who had an idea – basically a 6x6 with glued-on 1x1 rounds, that sort of managed to interact with each other – and then, “let's create a system out of it!” We set loads of requirements and really thought about how the system should work. Engineering came up with the exact teeth geometry, the mobility and so on. So yes, the gears, the roller coaster, the shooter; those were the really big projects that I did in Platform but as with all design work, it is product development so there's a lot of work that you do that doesn't necessarily come out.

At what stage are you brought into a discussion about a particular element?

I would say we have like a bucket of people and we all share like a similar passion and mindset, we're all very technical. We like deep-diving into mechanisms and figuring out specific measurements, really ‘nerding’ into a specific area. All those profiles were gathered in Platform and now it spreads across the different teams within the Element Design & System Governance organisation. But usually, we would get briefed by, say, the Creative Lead of a particular theme who has an idea – from that moment on, it's gathering requirements and then just starting to come up with different concepts. We create a lot of content for the stakeholders to choose from. So, maybe you come up with 10 different ideas that are being materialised into three, and those three become one idea. And then you keep on iterating on that idea.

So a lot of things have gone by the wayside that we never saw.

Yeah, exactly, and some are just really tiny trials that wouldn't make sense to launch anyway because we just want to ‘feel’ certain things to be sure that we're bringing the right thing out on the market. But in some cases, we do make things that are almost finalised but then shelved because, say, the theme might not happen. There are loads of parameters that have to come together and make sense in order for an element to be released.

I suppose us fans think of it as all being so pre-planned, that every element concept is coming out, but perhaps it's more like a sort of cooking pot of things that need to be in the right balance to make it to market. You're actually designing things that you don't think are going to work, to kind of prove that they're going to fail?

Exactly. In some cases it's difficult when someone asks us, “Make a new brick with this certain function” or “come up with a new windscreen for car”, for instance. They don't know exactly how it should look; maybe they have a reference from a movie but that reference can be very rough. So it's our job, as designers, to make something that suits the ‘LEGO DNA’ design language that we have across the LEGO System to also work for this particular reference. That is really hard to do in one go, so typically you would make different options and then, together with the Creative Lead or other stakeholders, you would make a choice. It could also be a combination like, "Oh this designer really likes what you did with the radius", and another one says, "I really appreciate what you did with the sharp corner." Then, say for a sheet of 10 elements, you make a blending and then you end up with one. It is very much inherent in product design to create all these different concepts.

Yeah, sort of Frankenstein's monster, but a good one! Nice monster!

Frankenstein's modular. So roughly what sort of percentage of your work would you say doesn't actually make it to market?

I think it's gonna sound a bit dramatic, but I would say maybe like 80% of the work we're doing doesn't reach it, but that doesn't mean it’s a waste. It's all done with a purpose to figure out the right design, the right function. And sometimes when we do shelve an idea we pick up on it again a couple of years later. Actually, at the moment, I'm working on two elements that I shelved a couple of years ago, and are now relevant again. I think that that is really cool.

So what would you say has been the trickiest, most technically difficult element for you to develop?

Of the ones that have come out, definitely the roller coaster tracks and the shooter, and they both had different challenges. The roller coaster challenges were in terms of moulding, especially the ones that slope up or slope down. We had ideas that we had to compromise on because of manufacturability. I think initially we wanted to have the design across all of the elements to be the same so that they all had this lattice structure of straight bars with a diagonal across, and it was just impossible to make that happen on the ones that were curved.

With the shooter, obviously product safety requirements were really high. But we also wanted to make something that has an awesome function – kids want to see an arrow fly far, and you want to knock some things over on the table when you're shooting at them, and aligning all those requirements into one product was really hard. There is always a balance. I would love, as a designer, to have the focus 100% on the design but it's not the reality. We need to have something come out of an injection mould, so there's always engineering features that are also part of the design.

Parts get amended over time – do they come back to the original designer for amends or can anybody do that?

No, there is actually a dedicated team that looks into that. They could consult the designer of the element but usually we're talking about a change that maybe happens after a couple of years, so it is not something that I would get back on my plate again. The System Coaches – they're the ones that know everything about the correct placement in grid, and they usually drive these changes – they see an element that was launched a long time ago and then when the mould’s time finally runs out and had to be replaced, that is the perfect moment to change the geometry. For example, I think you made an analysis about the 1x2 with the 3.2 shaft hook? They changed it [in 2008] and I'm sure this was a long-standing wish to change it. They decide together what is the right place in-grid. I definitely feel personally attached to an element I worked on but once it's handed over, then I also have to trust that they take care of it. I trust them to do a good job.

Do you build your own models? 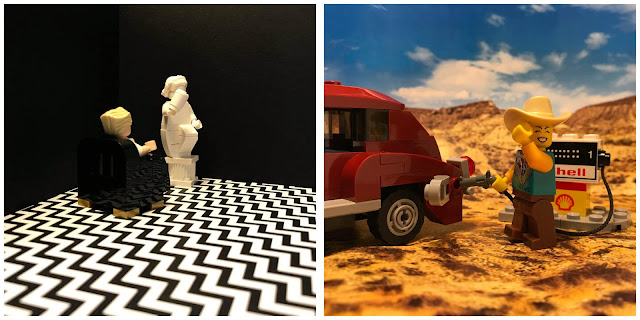 Yes, I mean, I'm not as skilled as the model designers are, but occasionally I do like to make small things, sometimes a bit of stop motion with some elements, just some funny little scenes and then I make a nice picture of it. 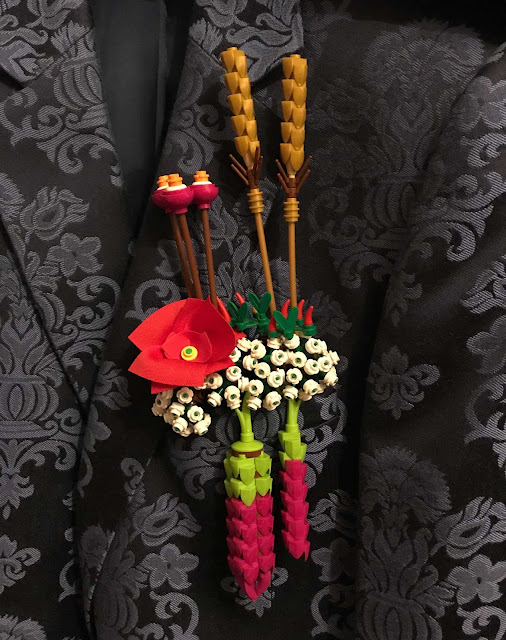 Here's a little flower piece for when I participated in a friend's wedding. I think those are really fun. There's just so much you can build.

We will publish the rest of our interview with Marinus soon, and Vibrant Coral Patreons will get a special preview of that even sooner. Thanks to Caz Mockett for interview transcription and Francesco Spreafico for subediting.


All images are ©2020 The LEGO Group unless otherwise attributed.
Admin: Tim Johnson Posted on 1/15/2021 12:06:00 pm
Email ThisBlogThis!Share to TwitterShare to FacebookShare to Pinterest
Labels: Inside LEGO, Interview