When the movie Minions: The Rise of Gru was postponed until 2021, several of the planned LEGO&reg; tie-in sets met with the same fate. Two sets did however get released in April, which is good as there is much of interest to be found... in one of them.

Unless you’re a bike fan or interested in the Minion minifigures, 75549 Unstoppable Bike Chase (shown on the right) doesn’t offer much to adult builders but 75551 Brick-Built Minions and Their Lair has thrilling new moulds – and is a hilarious build. Even if you hate these little yellow pipsqueaks, don’t you want to build silly giant mech versions of them?

Let’s discover what LEGO Minions are made of, starting with the new-for-2020 LEGO parts that comprise the giant Minions found in 75551.

Curved 2x2 corner bricks (3063), affectionately known as macaroni, were introduced 65 years ago. Three years ago the 2x2 macaroni tile appeared, but we still don’t have a 2x2 macaroni plate. However something close has been introduced in 75551; Plate Round Corner 3 x 3 with 2 x 2 Round Cutout (68568), essentially a 2x2 macaroni plate extended by 1 module at either end. Hmm, long macaroni… would that be rigatoni? 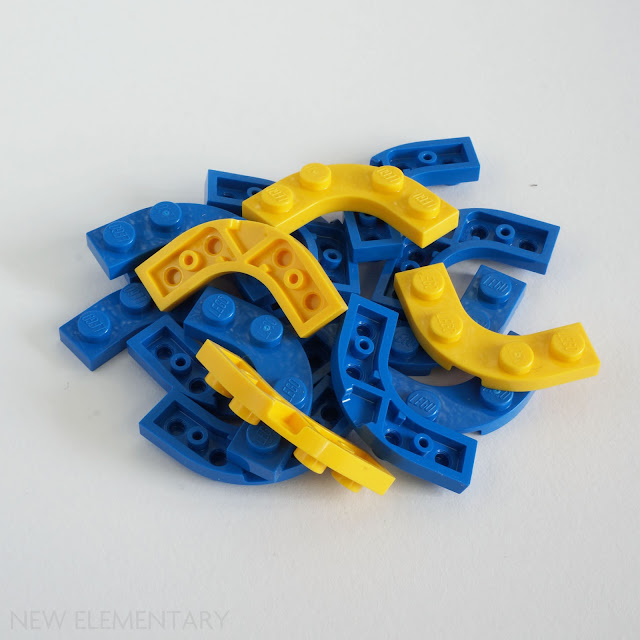 But why have they made this; is this a part we really needed? As is often the case with new elements, they provide necessary stability which is especially important for sets aimed at younger builders. The giant Minions are hollow and so you’re essentially building rounded square walls that are fairly tall. When building a wall with a curved corner using 2x2 macaroni bricks, you need to secure the curved section to the straights. There is the 3x3 plate with a curved corner (30357) which is extremely similar to this new part but that is no good if you’re adding a plate part of the way up a wall (as is required in this set), as it would project inwards. Space is at a premium when you are building, oh, say a giant Minion robot packed with tech. 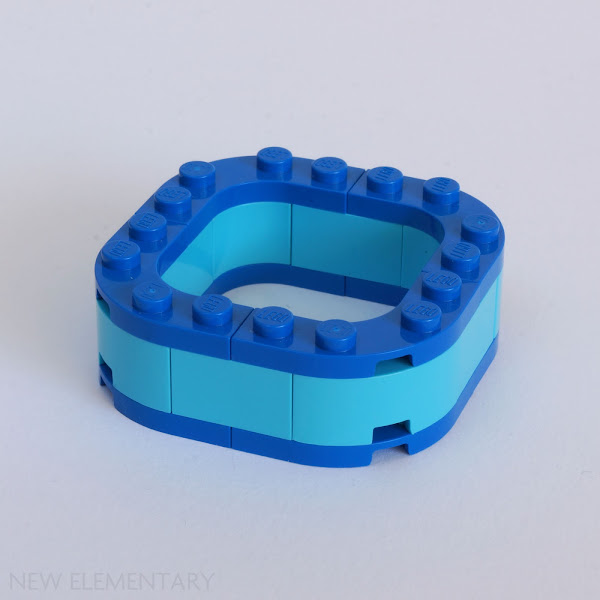 As you can see in this simplified example, Plate Round Corner 3 x 3 with 2 x 2 Round Cutout provides a lot of stability in this situation.

Not one but two new moulds have been created to represent the goggles worn by giant Minions.

Now, you may well be rolling your eyes at the thought of yet more specialised LEGO elements introduced for IPs but in this case, they’re both interesting and useful.

The giant Kevin and Bob Minions use 2x Brick Round 4 x 4 with Recessed Centre in Medium Stone Grey/ Light Bluish Gray (6303438 | 68325) as goggles. This new piece initially looks quite strange and unlike other LEGO elements but, as the name suggests, it is easiest to imagine it as a 4x4 round brick that has been recessed. In fact, those of you who enjoy building those upscaled LEGO bricks out of LEGO bricks could perhaps employ this new piece as a giant recessed stud?

The hollow area is 3 modules wide and 2 plates deep, with 4 studs present as an internal connection plus a Technic hole for pushing out pieces you have inserted. The ‘walls’ are a half-module thick; not a common measurement in LEGO parts but many of the specialist Minecraft pieces employ it. Also, the offset created when using a jumper plate is half a module so maybe there may be an interesting way to use this new round brick in combination with offset.

The sides feature notches, like a regular 4x4 round brick, so that you can attach this brick to a plate. The underside also looks unusual, thanks to the undulations required to form the walls. The gap there is not a standard width but the more adventurous among you may find a reason to insert something like a sword piece in there.

Stuart on the other hand is one of the monocular Minions, having just one large central eye. Consequently his giant goggle element is larger, but rather than being a brick, this one is a wheel!

Clever idea. Wheel 41mm x 15mm Technic in Light Bluish Gray (Design Element 5X5X2, W/ 4.85 Hole – 6303442 | 68327) is 5 modules in diameter and 2 modules thick, i.e. 5 plates. The recess is 4 modules wide, meaning the ‘walls’ are once again a half-module thick, and 1 module deep (as opposed to being say 2 plates or 1 brick deep) which makes sense given this new piece falls into the Technic System. It uses the hexagonal pin connector arrangement typical of large LEGO wheels, a feature utilised in its only other appearance to date in official sets in Hidden Side 80014 Sandy's Speedboat.

Even though it is rather plain (I can’t think of another LEGO wheel that has such a large, plain edge), I should imagine that vehicle builders are nevertheless happy to receive this new wheel. As for other applications there will be lots of fun to be had, and our contributor Kevin (Levell, not the Minion) was keen to experiment… 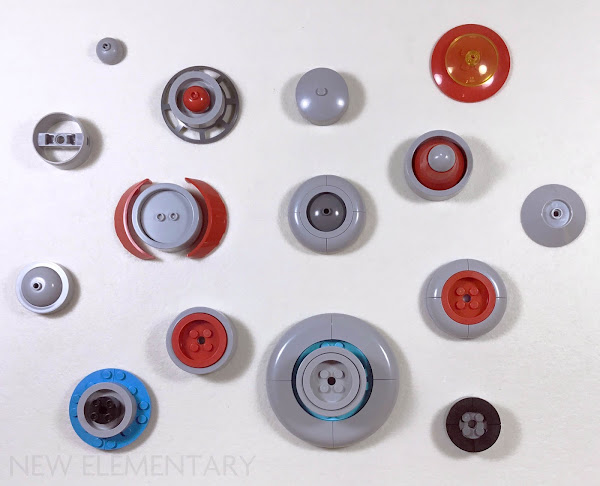 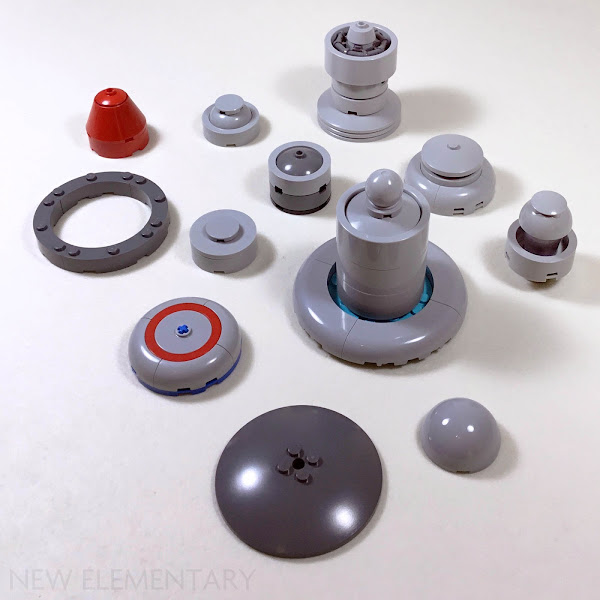 He began by gathering some similar parts, and seeing how they interacted together. 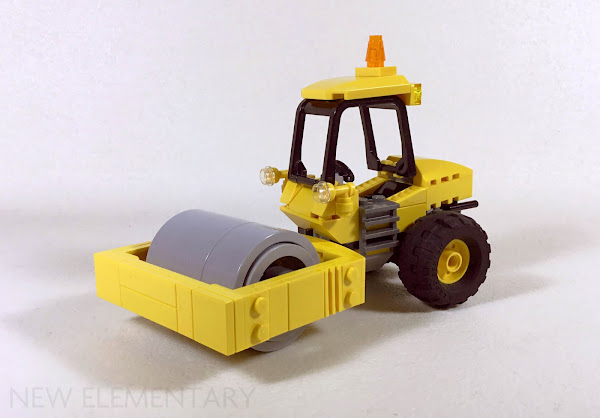 “I took the stack of the larger goggle piece and somehow, I've now arrived at this rather obvious application. Now I come to think of it, perhaps I could convert this into a spaceship...” 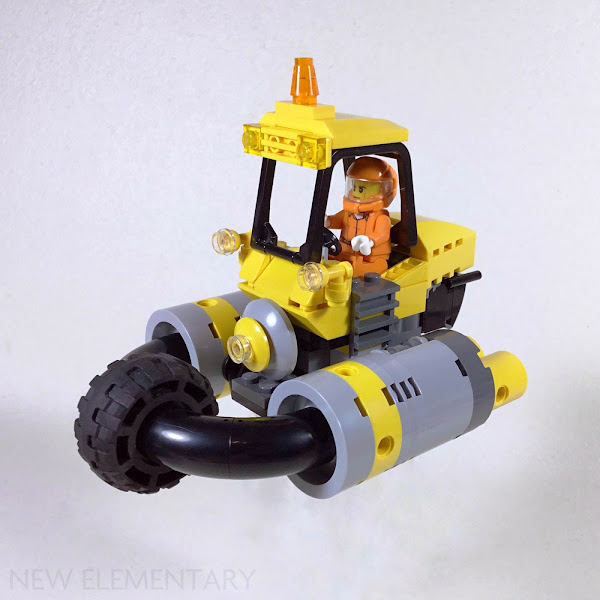 “I plonked that cab atop a new construction... sort of a space harbour ship, that helps push big spaceships into dock at space stations and the like.” 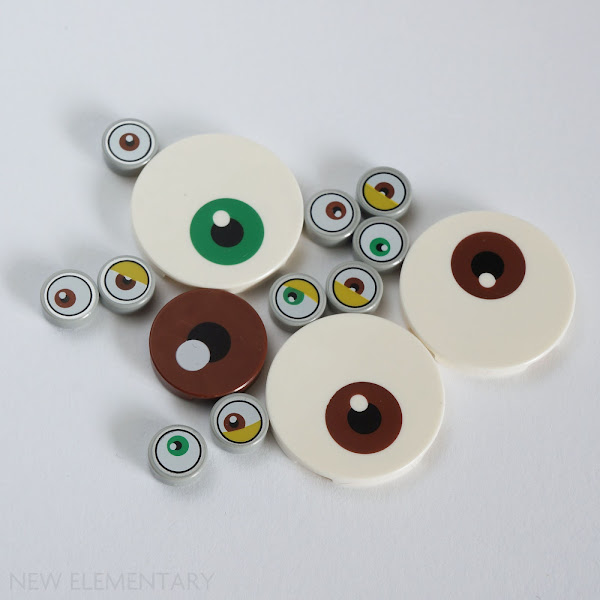 There’s a jolly collection of eyeballs across these two Minions sets, which is good news for any builder who likes to create characters, animals or hideous monsters... and among them lies another new mould for 2020. 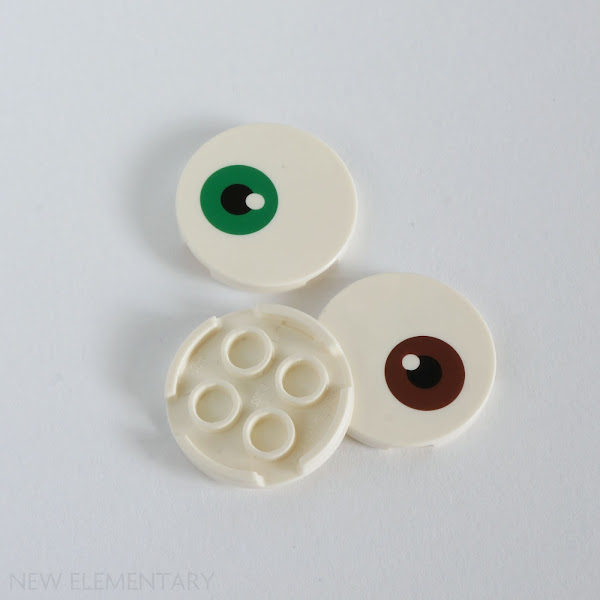 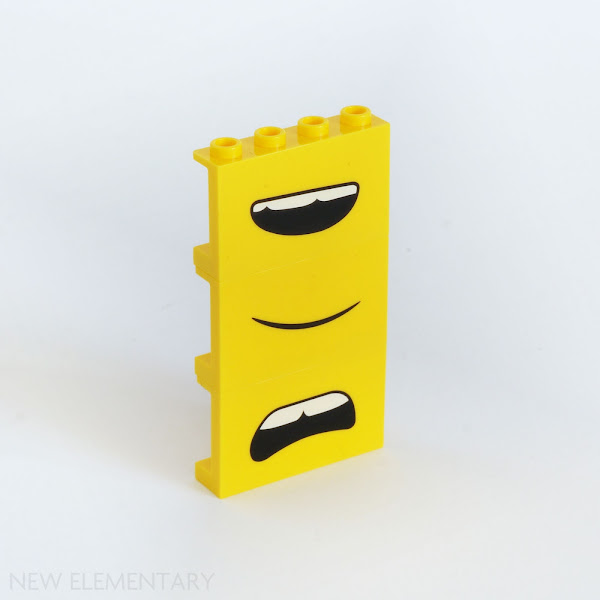 The giant robot Minions have mouths printed onto identical Yellow panels, so you can swap them around. Pictured from top to bottom are:

Two new elements are introduced in 75551 to represent Kevin’s hair; one for giant robot Kevin and another for regular Kevin. 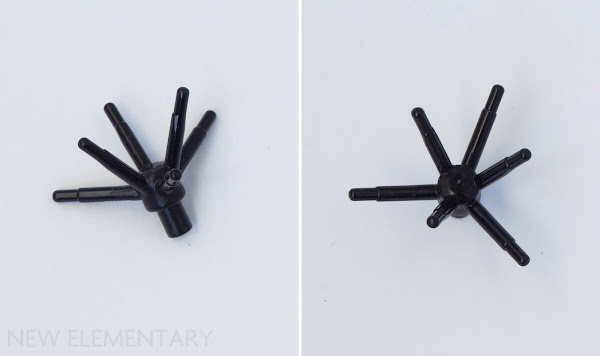 Giant Kevin’s hair is a recolour of an existing part: Plant, Flower Stem with Bar and 6 Stems in Black (6299824 | 19119). To date this intriguing piece has only appeared in Dark Green/ Green and Dark Orange. This Black version will therefore be very welcome, and 2 also now appear in Super Mario 71377 King Boo and the Haunted Yard Expansion Set.

As for regular Kevin he sports a totally new mould, Bar 1L with 3 Sprouts/Prongs in Black (6302576 | 68211), atop his shiny yellow dome. This is an interesting element! Very organic and asymmetrical, and turned upside down it would make a perfect bird’s foot. It has interesting connectors: like the 6-stem plant its ‘stalk’ is a 3.18mm bar while the 3 prongs are 1.5mm pins. So you can attach many… um, vegetables? 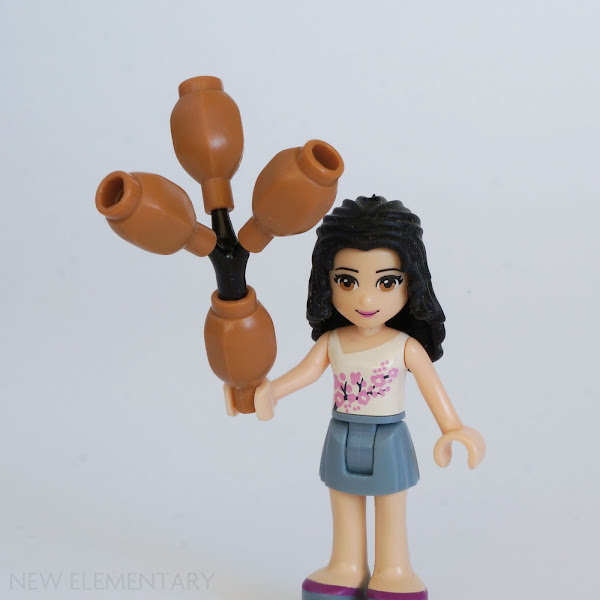 Or film a remake of The Thing using Friends minidolls. 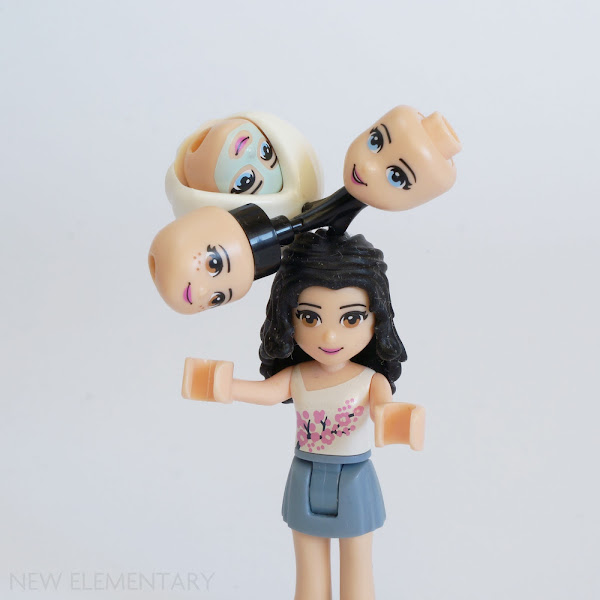 Minions seem to take great pride in their various hairstyles, and the hollowed stud on their LEGO heads invites you to come up with a range of glamorous new coiffures for them. 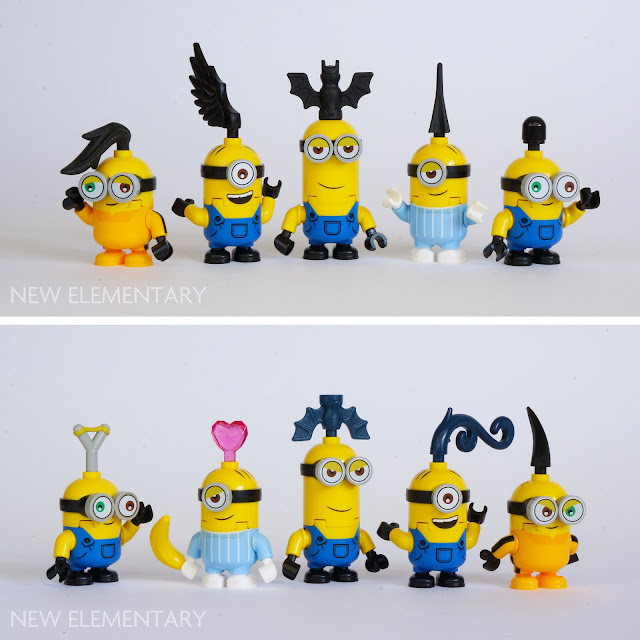 All text and images are © New Elementary unless otherwise attributed.
Posted by: Admin Posted on 10/17/2020 06:33:00 am
Email ThisBlogThis!Share to TwitterShare to FacebookShare to Pinterest
Labels: MOC, Set review