Today we welcome new contributor Caz Mockett (BlockHeadUK), well-known for her Micropolis builds that have even graced the Masterpiece Gallery of LEGO House. Her first New E assignment is well-timed for the spooky week ahead! She examines LEGO® Hidden Side 70437 Mystery Castle before using some of its parts to create MOCs. If you're buying this set, consider using our affiliate links: USA LEGO Shop at Home, USA Amazon, UK LEGO Shop at Home, UK Amazon. New Elementary earn from qualifying purchases. The products in this article were provided for free by LEGO; the author's opinions are not biased by this. 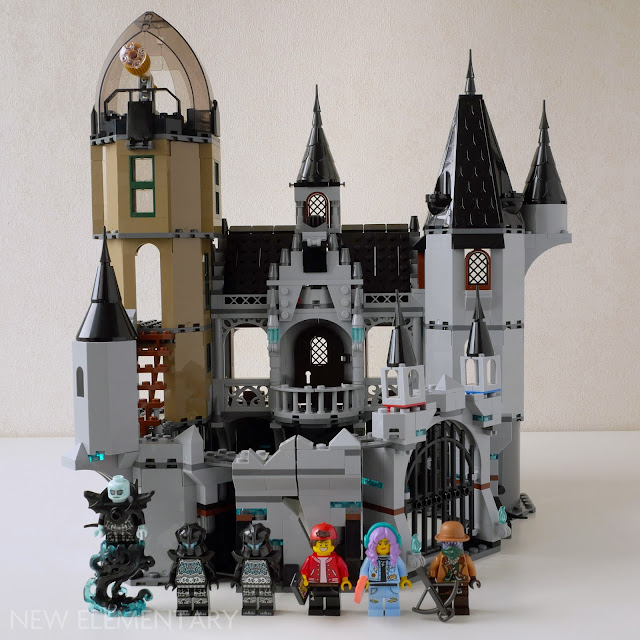 70437 Mystery Castle is the largest set in the current LEGO® Hidden Side releases for 2020. The castle is approximately 31cm wide, 27cm deep and 33cm tall in its closed configuration and 45.5cm wide by 26cm deep in its open position. It contains 6 minifigures, 1033 parts and is priced at £89.99/ US$99.99/ €97.47. The price per part is reasonable value at 8.7p/ 9.7c/ 9.4c respectively, especially when you consider that quite a few of the parts are quite large pieces such as corner panels, windscreens and moulded roof elements. 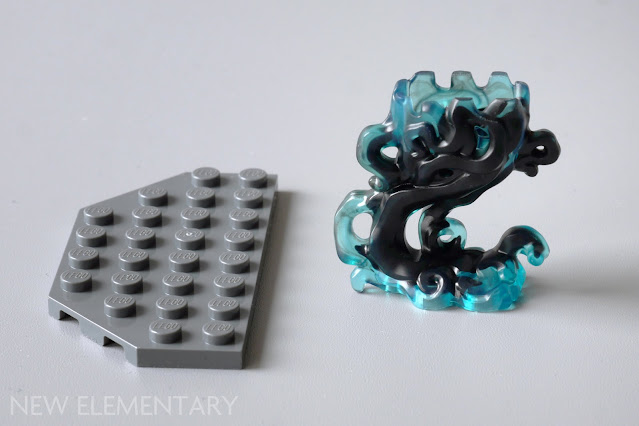 Two new parts have been created for this set, which are currently exclusive: 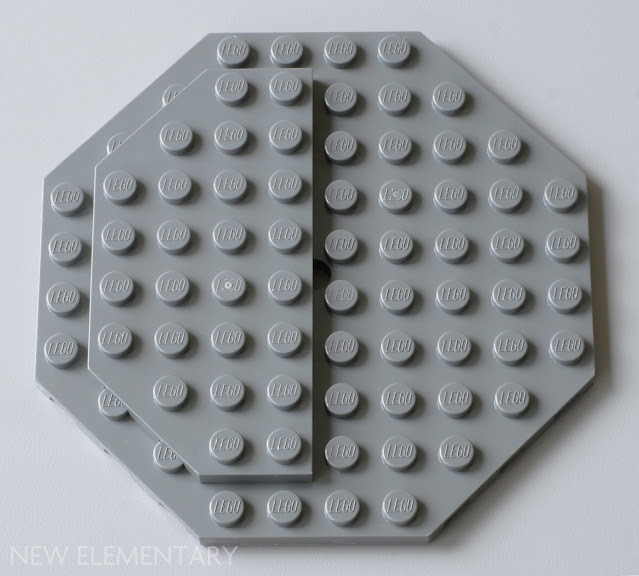 I was surprised that the half-octagon wedge plate didn’t already exist. There is not much to say about its geometry, except that using two together now allows us to make an 8 x 8 octagon, which sits nicely inside the existing Plate Special 10 x 10 Octagonal with Hole (4583688 | 89523) - we also get 4 of these in Dark Bluish Gray in the set. 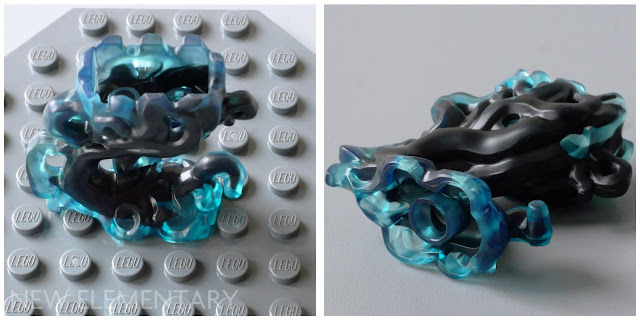 The new minifigure body part, a ghostly bottom-half extension for the main baddie, Nehmaar Reem is an attractive dual mould in Transparent Light Blue/ Trans-Light Blue with Black. It enables the minifigure to stand inside the swirling tendrils by way of two hollow studs in a recess at the top, which hold the legs secure. The 2 x 2 footprint means the whole piece attaches solidly to studs and helps the figure balance properly. 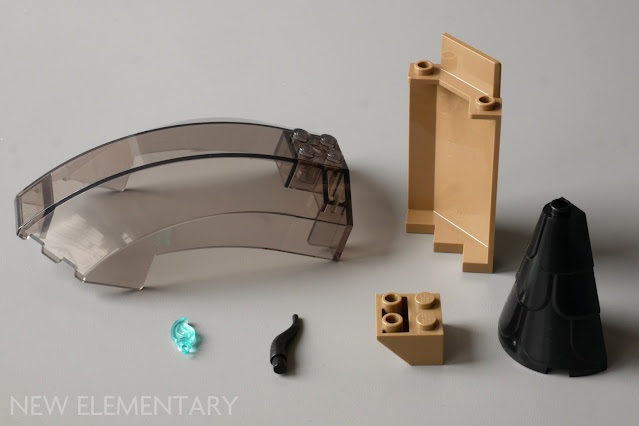 There are 6 recoloured elements, which can only be found in this set:

I was a little surprised that the 2 x 2 inverted slope did not already exist in dark tan, and I can see the trans-black canopy being popular with the space-faring crowd as a novel option for an interstellar cockpit canopy. 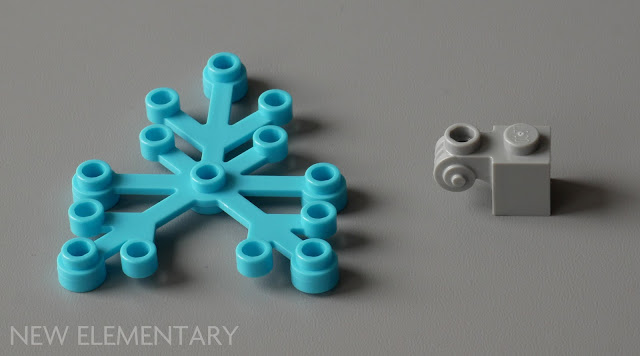 Two new elements included in the Castle can only be found in limited quantities in other sets from 2020: 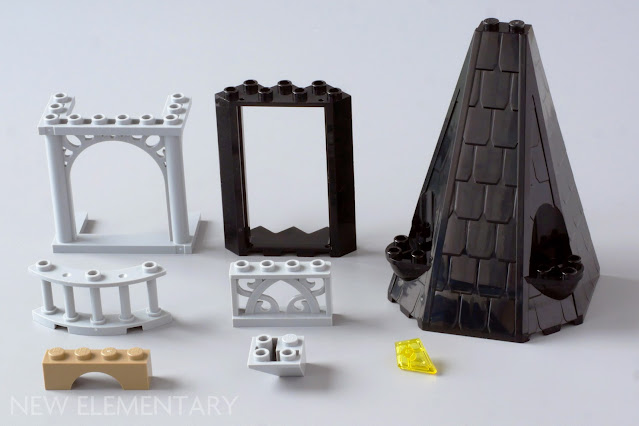 A further 8 elements are either in limited sets from 2019 or older still, and are making a welcome return: 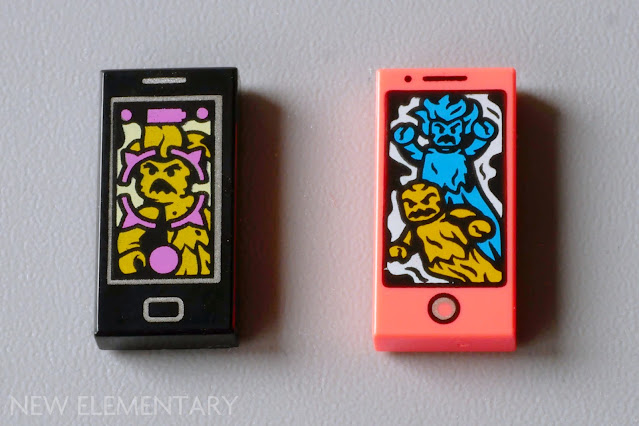 The set includes two relatively uncommon printed tiles, which have only been seen in 2020 releases from the Hidden Side theme:

Minifigures in the Mystery Castle 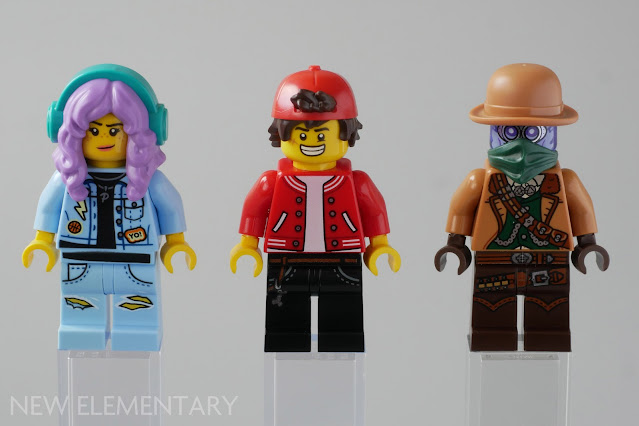 The ghost hunters in the set are Parker, Jack and Vaughn Geist. The Jack and Parker minifigures are fairly standard fare in the Hidden Side theme now, although Parker’s angry face print (6289288 | 66682) has only been seen in 70431 The Lighthouse of Darkness so far. 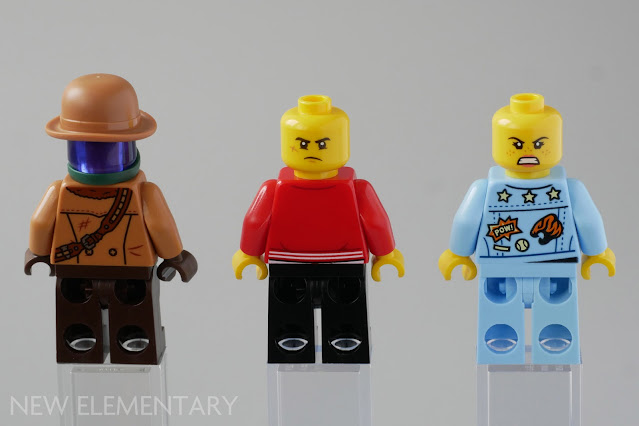 Vaughn meanwhile is a relatively new character only appearing in the latest sets in 2020, and his components are as follows:

The rest of his parts can be found in two other sets, Supernatural Race Car and 70433 J.B.'s Submarine:

I now realise that I might have put Vaughn’s hat on sideways, but we can always make the excuse that it was knocked out of kilter during his recent ghost-hunting escapades! 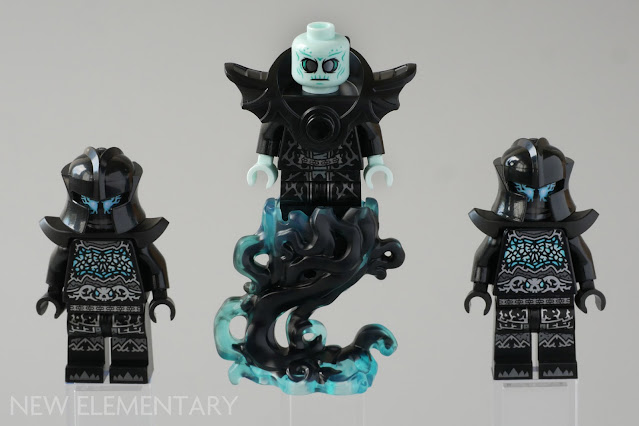 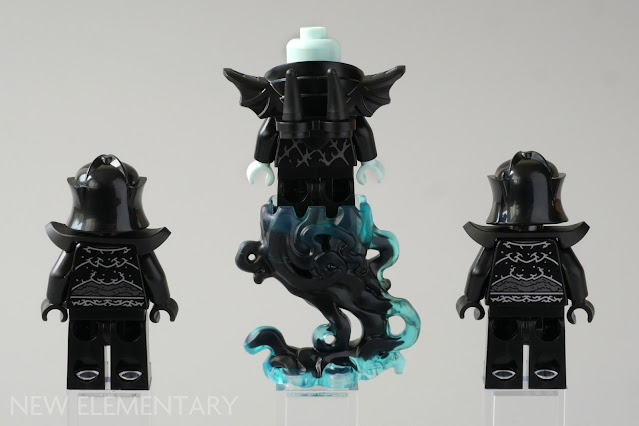 Turning our attention to the baddies, the two Shadow Walkers are identical and can be found additionally in the Supernatural Race Car and Phantom Fire Truck. Their most unusual components are:

Their helmets are not particularly special, having been in numerous sets since first appearing in 2004, but return here after a 4 year hiatus. However, I found their clutch was not particularly good which may prove frustrating to younger folks during normal play activities. 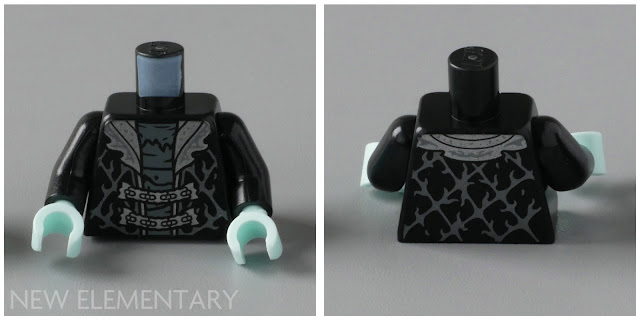 The main protagonist Nehmaar Reem is of much more interest to us since he is unique to this set. His metallic silver torso printing wasn’t easily seen in the previous shots of all the baddies, so is worth a closer look here. I have already covered his unique new wispy lower tendrils, but the rest of the figure consists of: 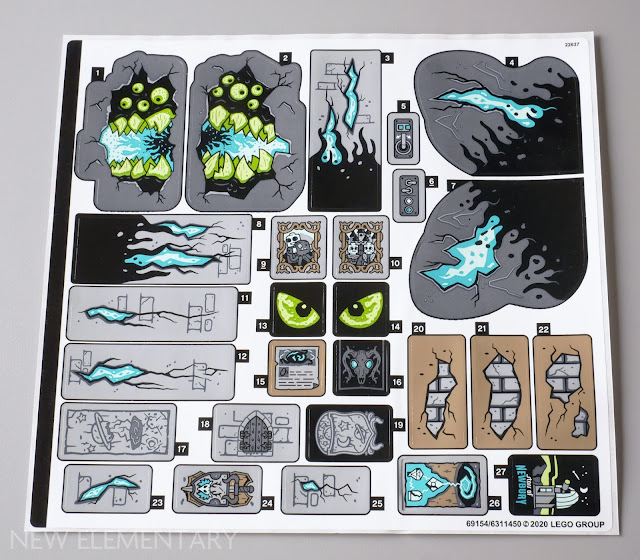 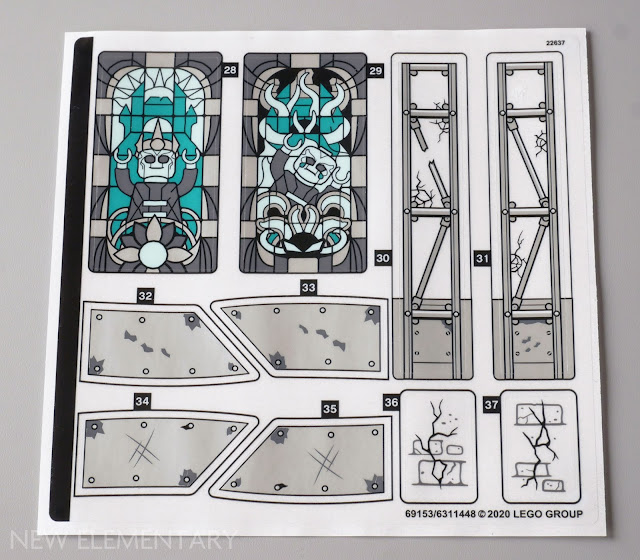 I decided not to apply the 37 stickers, which come on two fairly large sheets. One has a transparent background for stickers applied to windows, while the other is on a white backing. They both came wrapped inside cellophane with the instructions, which kept them nice and flat. Admittedly, the stickers would have given the completed model a little more character, but I prefer to keep them in reserve for use in future MOCs.

As an AFOL, at times the pace of this build felt a little pedestrian to me as there were many steps where only one piece was added at a time but this is fairly typical of a LEGO set aimed at the 9+ age bracket. 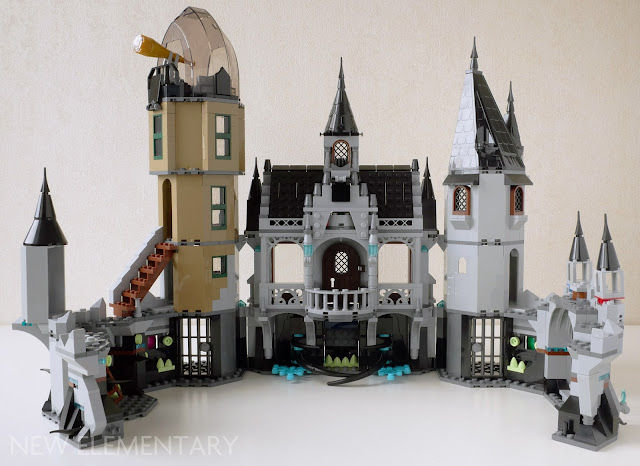 The build proceeds in three main sections, starting with the centre of the castle and then making up each of the side arms which can be fastened together with a clip and bar to form enclosed ramparts at the front of the model, or opened up to gain access to the inside of the courtyard for play.

I particularly enjoyed the jagged join at the front, which serves to camouflage the opening mechanism. 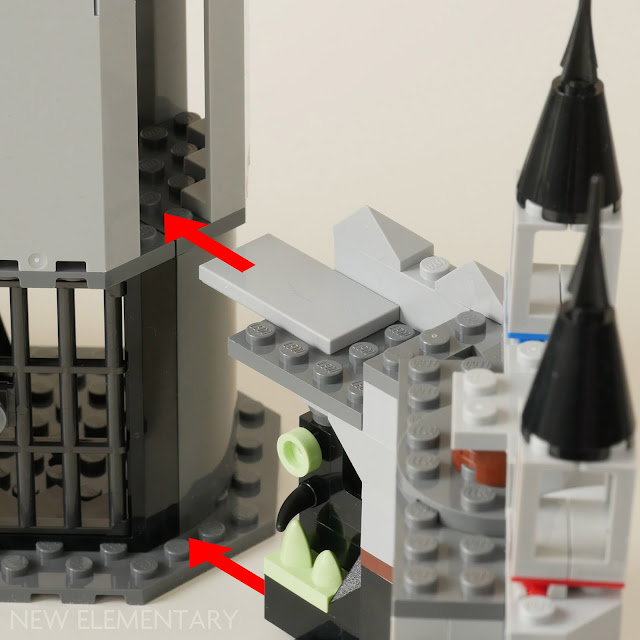 The side wing on the right is only attached by a single 2x4 tile at the top and a small brick at the bottom, so care must be taken when moving the model - I would recommend locking the ramparts together for extra strength. 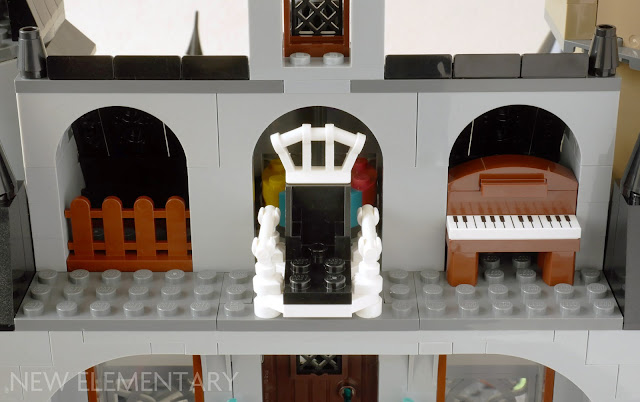 On the whole there are no earth-shattering building techniques to be seen, with only the occasional SNOT brick used, mainly to add horns for decoration around the base. I found the sloped main roof sections rather fiddly to attach - they are mounted on hinge bricks - especially as by this point I had already added the fence and piano under the arches, making access to where the hinges needed to be pressed down rather difficult for big fingers. Perhaps it would have been better if these items were added after the roof steps in the building instructions.

The castle contains several little furniture builds, the most interesting of which is probably the throne which is located at the rear of the building, just behind the roof. I also liked the design of the brass telescope housed in the transparent turret. 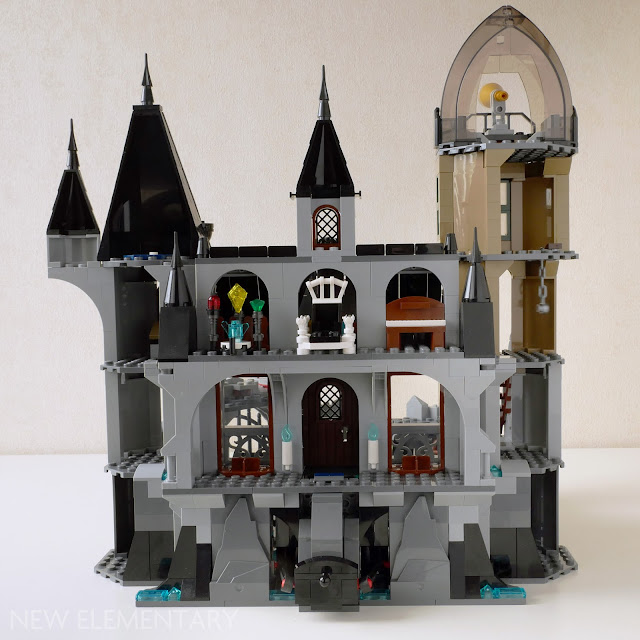 As is the case with many LEGO sets, the rear is in a dollhouse style to allow lots of access for play, including the turrets. Unfortunately, my phone will not run the Hidden Side App so I can’t comment on the augmented reality play experience, which is no doubt covered in many other reviews. But even without that, the castle has plenty of play potential - and even a few physical tricks up its sleeve. 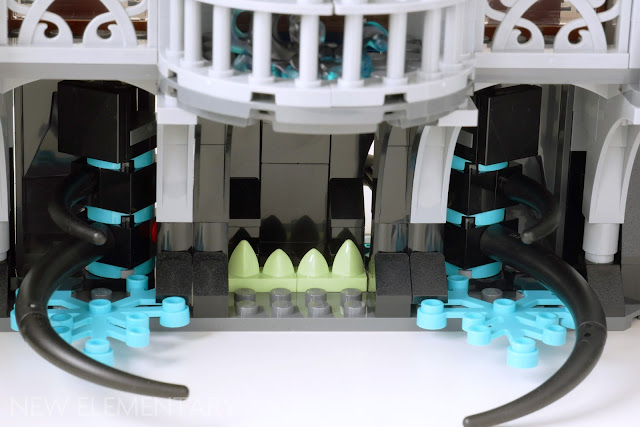 Behind the main door lies a trapdoor which is operated by a mechanism at the base. Once activated, it will propel an unsuspecting ghost-hunter into the gaping maw of a monster which lurks in the dungeon below, whose claws swing shut via the same mechanism, trapping the hapless victim! This view would have been even more menacing had I added the stickers for eyes onto the vertical 2x2 tiles just under each archway.

Two small turrets at each side of the courtyard gate also swing up to reveal red or blue targets for the app to scan. I’m sure the side builds, ramparts, courtyard and gates will prompt many more action scenes in young imaginative minds. The inclusion of so many interesting elements in dark/light bluish grey should also please AFOLs who like to build everything from castles to spaceships.

I thought I would take the opportunity to experiment with a few of the parts to see what creations of my own I could come up with, together with some extra pieces from my own collection. 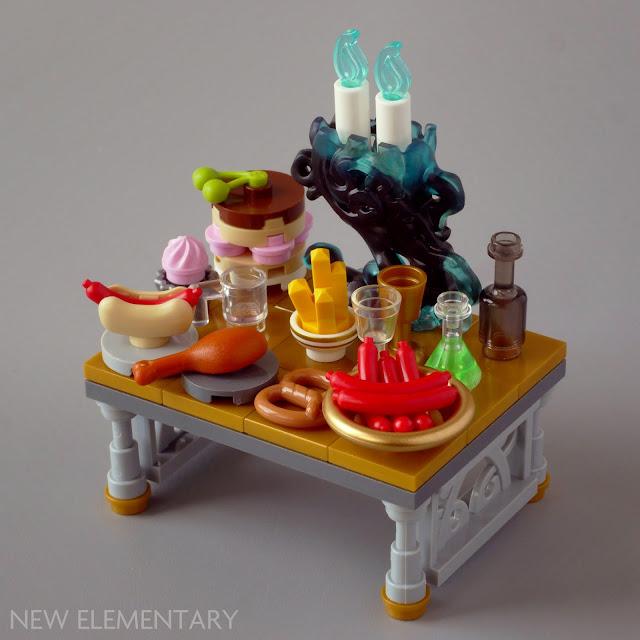 Looking through the new elements, I was struck by how much the minifigure lower body part reminded me of a gothic candelabra. Using a couple of the candlesticks and the new blue flames, I put together this banqueting table laden with food and ready for the guests to tuck in. The table’s structure also employs the two ornamental fence pieces plus four telescopes from the set. The overall colour palette of the parts in the set is quite subdued, which lends itself well to Gothic-style builds. This scene shows my Gothic Fountain Folly which utilises the large ornamented arch pieces, 1x1 modified bricks with scrolls, some half-octagon plates, 1x4 fence elements and the double inverted slopes found in the castle to build the main structure. It is topped off by an impressive black turret. It’s the perfect rendez-vous location for the Count, armed with half a dozen blood-red roses and a shiny gold ring, to propose to his favourite lady on a very special date (she said yes, by the way!). 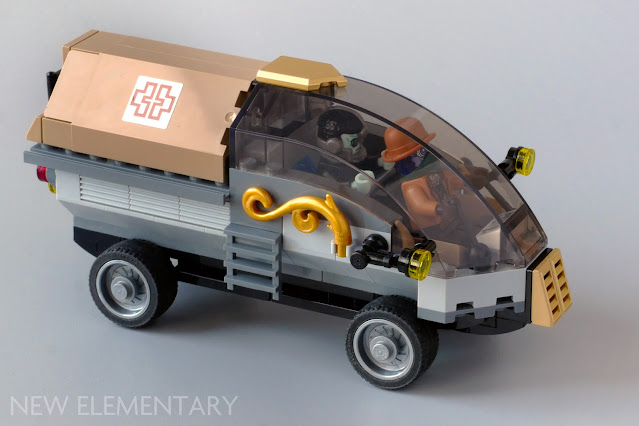 I’m not usually much of a vehicle builder, but the new trans-black canopy was just begging to be used for some sort of mode of transport. I felt that the dark tan corner walls could be used to represent a tarpaulin cover for the back of a pick-up style truck, if used on their sides. The rest of Vaughn’s Van developed from there. 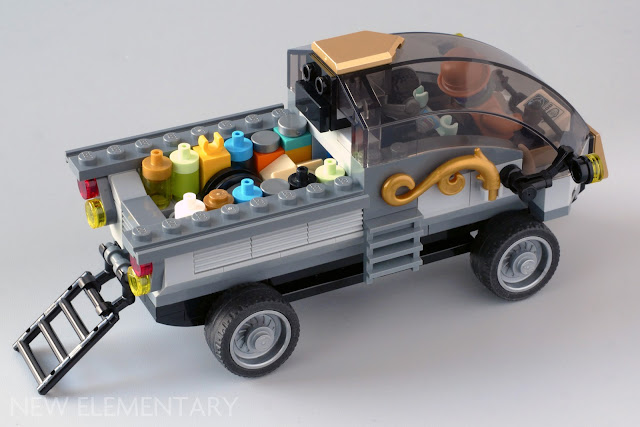 Vaughn himself has given up on the ghost-hunting and has thrown in his lot with henchman Reem, who is now part-cyborg. The pair roam the badlands around my Apocalypseburg diorama, running contraband for the citizens, in their Steampunk-inspired vehicle complete with gold flourishes. Business is booming!

And finally, the big roof part was laying on its side on the build table when I dismantled the set, and immediately reminded me of an animal snout! 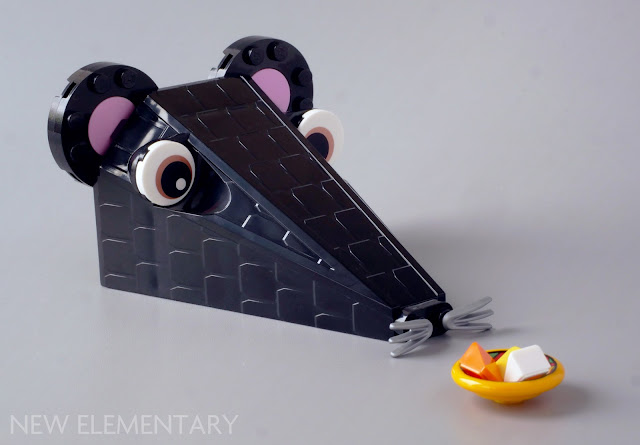 With the addition of a couple of eyes, ears and whiskers, it was transformed into Mortimer Mouse, connoisseur of fine fromages and founder member of the Rodents’ Cheese Association.

Overall I enjoyed the build experience, with a couple of minor exceptions where access was a bit limited. The finished model is quite substantial, and even without the accompanying app the Castle provides plenty of scope for ghost-hunting scenarios and play. It also offers potential for MOCing with interesting pieces if that is what attracts you to the set and its component parts.

READ MORE: Even Muppet-haters will love the new parts in 123 Sesame Street

All text and images are © New Elementary unless otherwise attributed.
Posted by: Admin Posted on 10/25/2020 06:14:00 am
Email ThisBlogThis!Share to TwitterShare to FacebookShare to Pinterest
Labels: Hidden Side, MOC, Set review