It has been a couple of months since the 16 finalists in the AFOL Designer Program, hosted by BrickLink and supported by The LEGO Group, were revealed. We know two of the finalists well and asked them both to tell us a little about their winning designs. Last time Jonas Kramm described his Wild West Saloon, and today we have another Jonas K! – namely Jónás Kovács, a Hungarian university student living in Serbia, known online as BrickJonas.

Hopefully most of you have already seen The LEGO® Story, which is a limited edition set designed by me and packed and delivered by BrickLink. I sent this LEGO set idea to the AFOL Designer Program and was one of the 16 builders who entered the final, pre-order phase in the program. Today, I would like to talk a little bit about my submission, and show you some interesting details in it.

Let's start with a short backstory. I - like many of us - was always interested in the LEGO design and manufacturing process, and as a kid I also wanted to become a LEGO designer. When I noticed that thing called LEGO CUUSOO, I knew I had to try to upload something there. After many years of building and thinking, in December 2015 I finally decided I should try to make a LEGO factory. 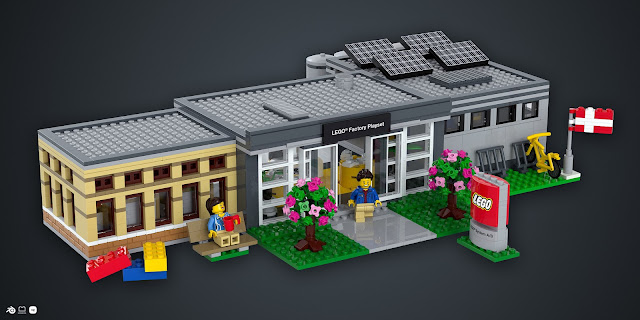 In January 2016 I uploaded my project, LEGO Factory Playset, to what had by then become known as LEGO Ideas. My dear friend, Gabriele (aka Zanna) helped me by making amazing digital renderings of it. I will be honest: I probably rushed a little bit with it initially. In the upcoming months, I slowly improved the overall look and feel of the idea and when I posted the third version of my project, the biggest LEGO fan blogs shared it and it was also featured in the staff picks. Huw from Brickset also helped me redesigning some parts of it, which was a fantastic experience for me. In the end, it didn't reach the necessary 10,000 supporters but the set idea itself stayed in my brain.

In late 2018, BrickLink and The LEGO Group announced the AFOL Designer Program and from that first moment, I knew I should redesign my LEGO Factory because the goal of the program was to celebrate the 60th anniversary of the LEGO brick.

First of all, I researched LEGO history to collect as much information as I could. I decided to build some vignettes which represent not only a LEGO factory but also the most important bits of the company's history.

My set idea represents four different vignettes: Ole Kirk Cristiansen's first workshop, the first moulding machine, a designer's office and of course the modern factory with a moulding machine. I wanted to pack as many details as I could into in these small scenes without making them overcrowded. 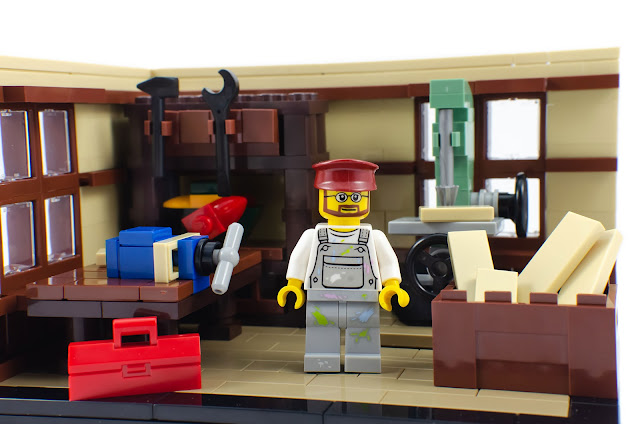 For this vignette, I found some images on the LEGO website of their first milling machine and checked images of different old milling machines. I also rewatched The LEGO Story animated movie  which the company made a few years ago. The milling machine and the small wooden duck took the most time to build, but I also managed to fit a table, a cabinet, and even a vice in this small room.

For this vignette I would like to point out the window designs and the shelf. 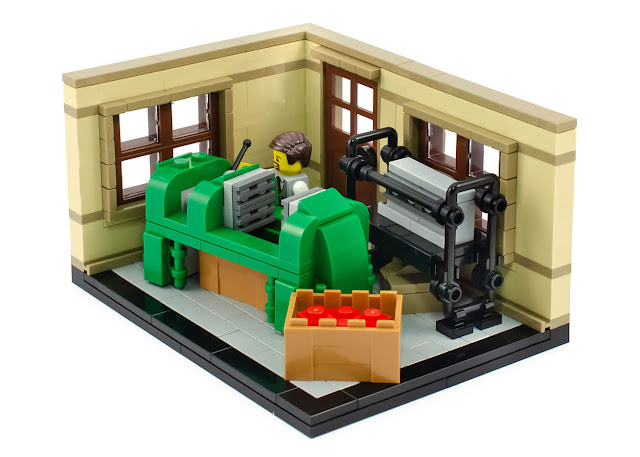 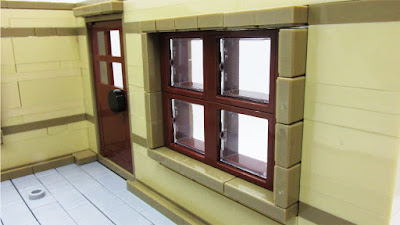 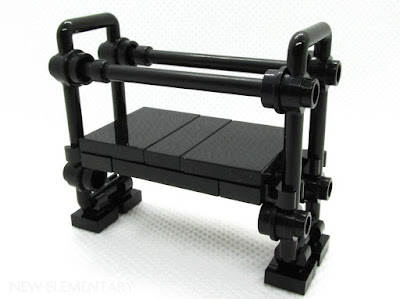 For the windows, I used a SNOT (studs not on top) building technique with some jumper plates and tiles, in order to achieve some depth to the walls. I believe I haven't seen this technique used before anywhere, but please let me know if someone already created it!

I redesigned the shelf a couple of times and, I'll be honest, this final version was inspired by New Elementary's own Jonas Kramm - I remember reading an article where he used a couple of Lattice 3X6 Module W/Knobs (Element ID 6138603 | Design ID 23444) to build a shelf.

I built the small green moulding machine at the very end of the design process, when the other three vignettes were already finished. It was really tricky to make something recognisable in minifig scale, so I actually ended up combining the manual moulding machine (seen in The LEGO Story movie) and the first semi-automatic machines into one minifigure scale machine. It isn't 100% identical, but I hope it's recognisable. I also built two small moulds which I put on the shelf. 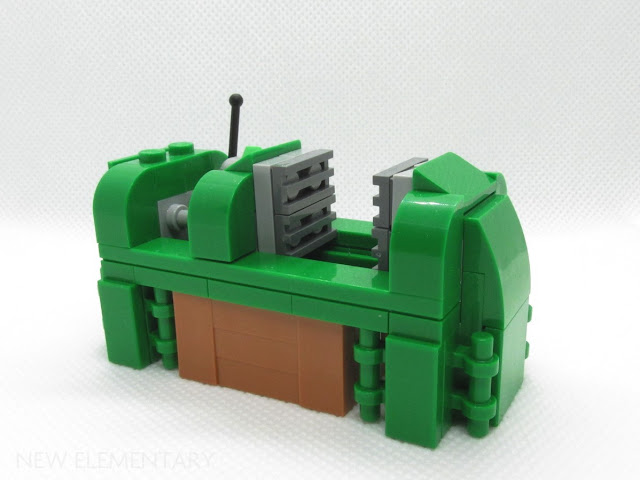 The third vignette is smaller than the others, because it only represents a part of the designer's office. 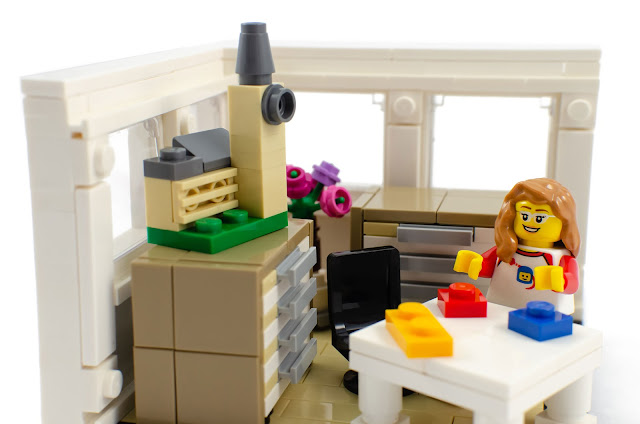 I used the small drawers from my LEGO Factory Playset, because I really like them. My friend Adeel Zubair (who is a fantastic builder) helped me design those back in 2015. I built the middle part of it (the actual drawers) and he designed the frame and the inside of the drawer; it was really tricky to connect those dark tan tiles sideways. I also made a small plant, a Big Ben micro model, and a table with chair to furnish this room.

The last vignette is the biggest one because the modern moulding machine is pretty big compared to the old one, which you saw in the second scene. 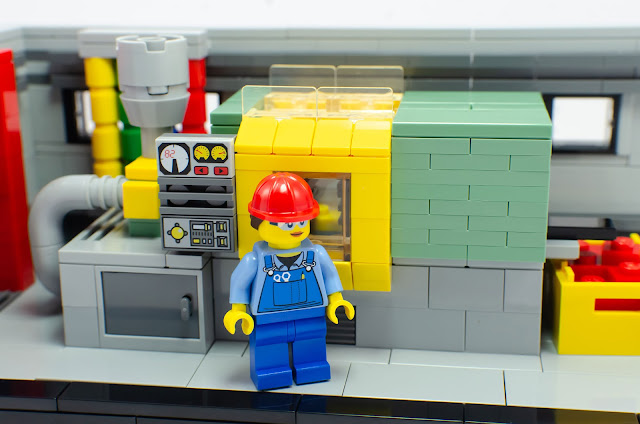 I completely redesigned the machine from my LEGO Factory Playset, making it five studs wide instead of four. It contains some interesting building techniques with jumper plates. For the tubes I wanted to use a hose but unfortunately it wasn't available for use in the program, so I needed to find another solution and used some macaroni tube pieces.

I wanted to achieve an industrial feeling with this scene, that's why I included only those small windows on the grey walls. 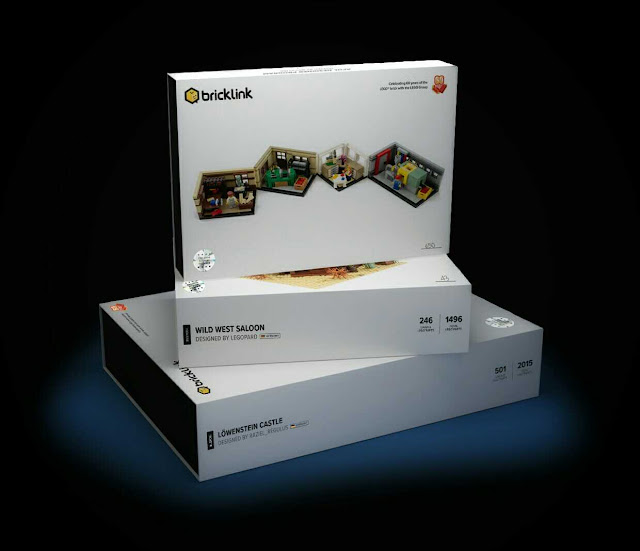 I would like to take this opportunity to thank every AFOL who supported me during the last couple of years. It was a hard journey but it seems like I've managed to reach my dream with the help of this fantastic community. Brick on!


Like Jónás' model? The LEGO Story costs US$99.99 and contains 1442 parts. (Please keep in mind that the sets ship from the US and so may come with additional fees.) Also look around and maybe support one of the other great crowdfunding projects. All 13 successfully crowdfunded designs are available for general sale until July 1. A maximum of 2500 copies of each set can be sold.


READ MORE: For his AFOL Designer Program set, Jonas Kramm took the opportunity to include lots of hard-to-find parts!

Posted by: Elspeth De Montes Posted on 5/02/2019 04:00:00 am
Email ThisBlogThis!Share to TwitterShare to FacebookShare to Pinterest
Labels: Community