LEGO® colour 154 has had a bit of a bumpy history, and it seems it might not be over yet... now Sven Franic has noted a change for 2019, and is wondering what's going on! [Editors note: This article has been updated to incorporate The LEGO Group's comments on changes to Dark Red in late 2018.] 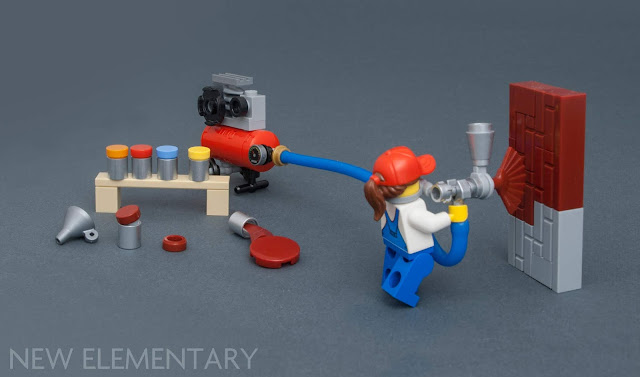 Somewhere around 2009 - 2010 there was a secret switch from “old” Dark Red to New Dark Red. During the transition period, when 10182 Café Corner was still occupying store shelves, you might apparently get a mixed batch of old and new Dark Red pieces in the same set. Judging by the backlash of the AFOL community after the big 2004 colour changes (when TLG transitioned from BASF’s pre-coloured ABS pellets to in-house pigment mixing) it is not surprising they would avoid attracting attention to subtle changes in the tone and texture of elements if it was not clearly noticeable or did not affect the build experience. BrickLink never differentiated between the two shades of Dark Red – and neither did TLG externally. Internally they retained its colour ID – 154 – although they changed its name from Dark Red to New Dark Red. 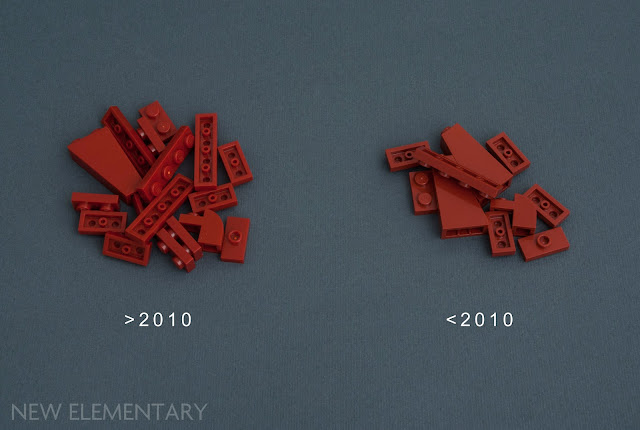 According to the personal experiences of LEGO fans, shared within various LUGs and forums, there was also a period around 2014 when the colour had quality issues, particularly with small plates and tiles splitting in half. It was the newer shade that was affected; Mould no. 18 for 1x1 Tiles is mentioned as a particular offender.

These issues seem to have since been resolved, indeed The LEGO Group made the following statement late in 2018:


“The LEGO Group has been working hard to address reported issues with reddish-brown bricks becoming brittle and breaking under use. The issues have been identified and we are happy to announce that they have been fixed. The fixes were put in place earlier this year for the LEGO colors #154 (new-dark-red), #192 (reddish-brown) and #308 (dark-brown). We waited until now to make the announcement, as we wanted to be 100% certain all issues had been addressed and fixed. If you, at any time, have a LEGO element which doesn’t live up to the standard you’d expect from us – then please don’t hesitate to contact LEGO Customer Service and we will send you replacement parts. We are terribly sorry for the inconveniences this has caused our loyal LEGO Fans across the World.”

In 2019, 154 New Dark Red seems to have changed again. If the slightly duller shine didn’t grab your attention, try looking at the pieces against a light source. Similar to the older pre-2010 Dark Red, the new pieces allow considerably more light through. Might this change be the publicly visible results of The LEGO Group's 2018 statement, or is this a further change in 2019?

Due to the lower colour opacity, the newer pieces may show a slight “glow” around the edges where the plastic is thicker and reflects more light. Another difference compared to the earlier shade is that the 2019 Dark Red pieces show very subtle flow lines - an inevitable aesthetic defect in injection moulding also known as “weld lines”. We are used to seeing this side-effect in Silver Metallic [TLG] / Flat Silver [BL] and Warm Gold [TLG] / Pearl Gold [BL] elements. The updated Dark Red however, shows much subtler, almost unnoticeable lines. (Click image to enlarge.) My pre-2010 Dark Red parts do not show weld lines, however other builders have reported them in some of theirs. Let us know in the comments if you see weld lines in your pre-2010 Dark Red parts. 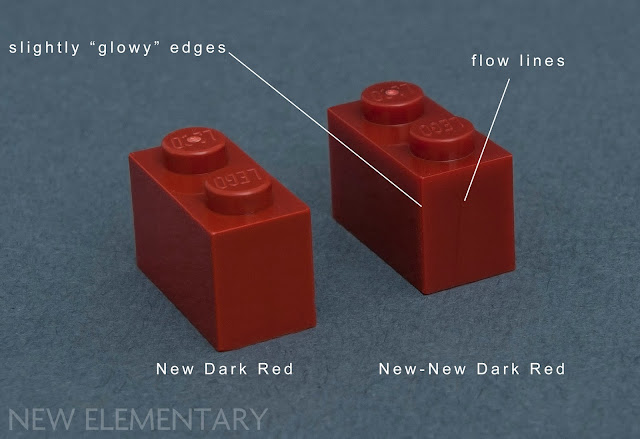 When I got a chance to tour the Kornmarken LEGO Factory in Billund last year, I saw huge shelves of stacked bags with pre-coloured ABS pellets that they still use for some of the colours. Our tour guide was trained to answer questions from children, not nosy AFOL spies questioning every process to shreds, but this didn’t discourage me from trying. I wanted to know if the pre-coloured pellets we see on the shelves were used just for specific elements in that colour or if all of the elements in those colours used pre-coloured pellets. I got an almost suspiciously quick response that all of the colours I see on the shelf use pre-coloured pellets for all of their elements. There were a lot of different coloured bags on those shelves, including all of the Earth and Dark tones like Dark Red, the shade-inconsistent Sand Green, and the occasionally brittle Reddish Brown. This could suggest that the factory only mixes approximately half of its pigments in-house.

If this is true, it means any quality control issues with certain colours can be blamed on whoever is the supplier of the pre-coloured ABS, although it doesn’t necessarily mean the supply is outsourced at all. It could just mean that a central LEGO factory produces the coloured pellets in one place to avoid pigment mixture inconsistency between different production lines.

Apart from personal observations, I couldn’t get any substantial information which would shine more light on these mysterious changes. Hopefully the rigorous LEGO team working on maintaining the world’s top quality standard for injection-moulded plastic had a good reason for the update. If you haven’t noticed the change, it can be considered a job well done.


Did you notice the change to Dark Red? If yes – do you care? The LEGO Group are always reviewing and altering the more than 20 types of plastic they use across various elements, and indeed they also recently changed some of the transparent materials too, which has resulted in visible differences. Have you noticed other changes to even more colours or materials this year? Let us know your thoughts in the comments.

All content represents the opinions of New Elementary authors and not the LEGO Group. All text and images are © New Elementary unless otherwise attributed.
Posted by: Admin Posted on 5/06/2019 04:00:00 am
Email ThisBlogThis!Share to TwitterShare to FacebookShare to Pinterest
Labels: Colour