Thomas Jenkins (@thomas_jenkins_bricks) continues our series of Element Developer Q&As, once again with Stephan Breum Steen, Senior Mechanical Engineer in the Novelty Element Development department at the LEGO Group. This time Stephan answers our questions about the LEGO® Escalator Link Chain with Panel and Centre Divider (69900). Then, Thomas provides additional analysis and MOCs. Transcripts were edited for clarity, readability and narrative flow. 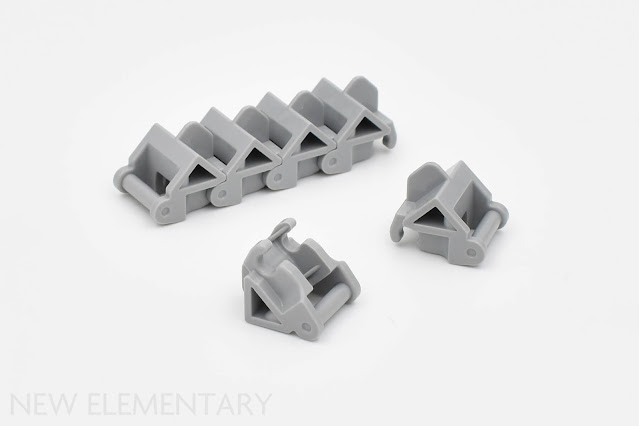 The Escalator Link was developed for 41450 Heartlake City Shopping Mall, where it is used to make a working escalator. It has only appeared in one other set to date: 71741 Ninjago City Gardens, where set designer Markus Rollbühler subverted expectations and used it to make a duo of serpentine statues, which got me really excited to take a closer look at this element. 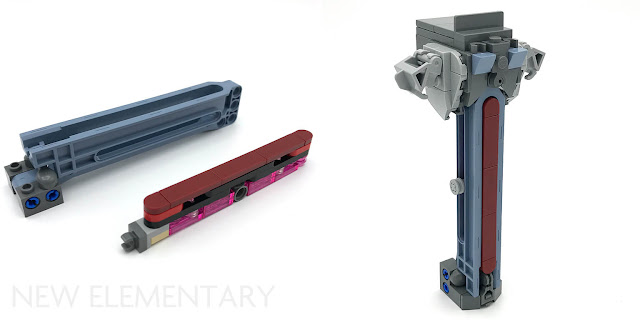 Stephan has been involved in the development of over 100 elements and is one of the marvellous minds who takes a new element design and makes it a reality. As explained in the first article, element developers are one of the many, many different roles in the LEGO Group who work together to create each new element. They receive the brief from the product designer or element designer, and when complete the mould developer continues the work. It's a carefully considered process, but what interests us at New Elementary the most is how we can integrate it with parts from our collection of existing LEGO elements.

What was your background before joining the LEGO Group?

Stephan: I have a formal education as a mechanical engineer, and before the LEGO Group, I worked designing elements for wind turbines (blades and other glass fiber elements), thermostats (plastic elements) and various other projects as an engineering consultant.

Stephan: I started with the LEGO Group in 1997, in the LEGO® Primo team. Since then, I have worked with most product lines. 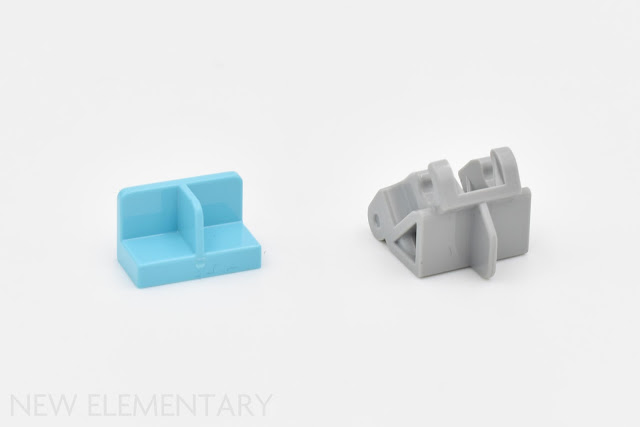 What was your brief for the escalator link?

Stephan: My brief was to take the general shape of the element and work out how we could design it technically so it worked for its intended use (in this case an escalator for a shopping mall) and passed our product safety and quality tests. I received a 3D file containing the general shape of the element. Also, the model builder introduced me to the intended use of the element in the model. We needed to combine the features of elements 42479 and 18971 [Panel 1 x 2 x 1 with Rounded Corners and Center Divider, a.k.a. the 'foot plate'].

Roughly how many prototypes were in the concept stage, and what sort of ideas were discarded?

Stephan: We didn't have many different prototypes during this process. For a short period, we tried with studs on top for the figure to stand on, but that didn't really work in the model, so we went back to the foot plate.

Stephan: The element is made from High Impact Polyamide (HI-PA). This material can be hard to work with in production, due to a very low viscosity. Any complex geometry between mould parts will increase the risk of 'flashes' on the moulded part, so we tried to tweak the element design to get as simple surfaces as possible on the mould parts.

What testing, if any, was undertaken?

Stephan: This element underwent the thorough product quality and safety tests that all LEGO elements need to pass. Along with normal dimensional verification, we did a lifetime test on the parts to see if there would be problems in the shaft/fork connection over time, for instance if using a motor.

Did any issues arise during the Design for Manufacturing stage?

Stephan: Yes, initially we saw burn marks so we chose to add a loose core in the mould for improved ventilation.

Stephan: It's hard to say, but perhaps I would like to add some more LEGO identity by putting on a couple of studs.

The Escalator Link is a unique element within a rather small family of 'Track Elements'.

Intended to be used as a flight of stairs, the element is basically a right angled triangle with attachment points at two corners to connect consecutive steps. 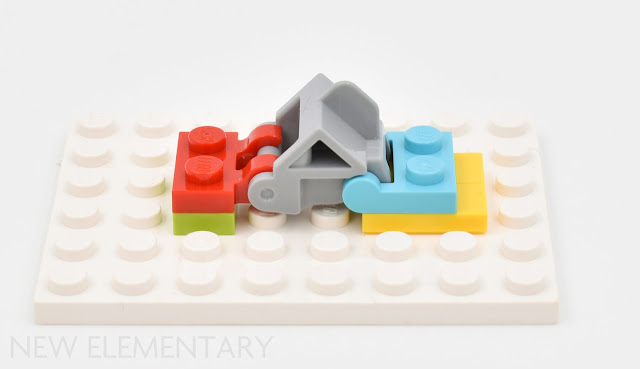 As Stephan alluded to in our interview, the element is devoid of studs. It relies instead on clip and bar attachments to interact with other elements. The bar end is a standard 3.18mm bar, much like Plate Special 1 x 2 [Side Handle Closed Ends] (48336). At the opposite end are a pair of clips which offer a much looser connection to other compatible elements than the standard clip elements that I can think of. Less grip here allows for a nice flexible chain of links.

As mentioned above, that flange that projects out of the top of the element is useful for keeping minifigures (and minidolls) firmly planted on an escalator step. It reminds me of the way Panel 1 x 2 x 1 with Rounded Corners and Central Divider (93095) is used in vehicle sets to keep minifig bums on seats. 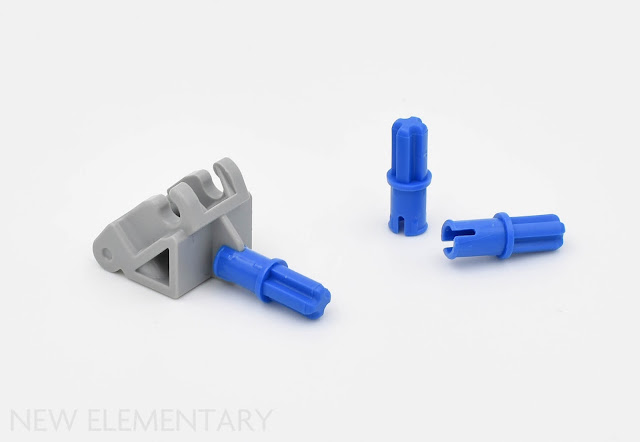 I noticed that the width of the foot plate complemented that little recess found in Technic pins. Interesting, but I'm not sure if this is a particularly useful discovery. 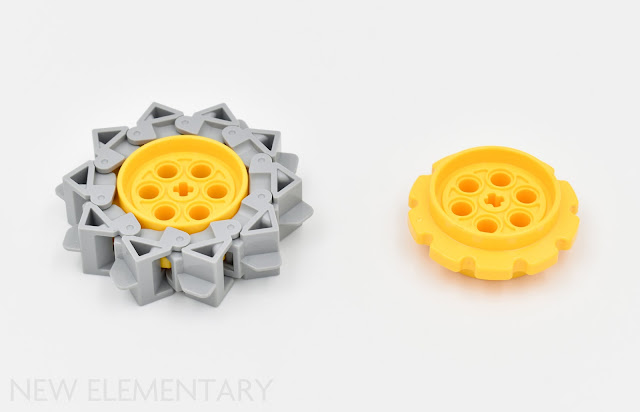 On the underside of the element is a channel which allows compatibility with gear elements. 41450 Heartlake City Mall uses Technic Sprocket Wheel (57520) to provide its working escalator with some motion. I tried a few other gears that I had lying around but it was only the other Technic Sprockets that had teeth of the correct length and interval to bite the chain. 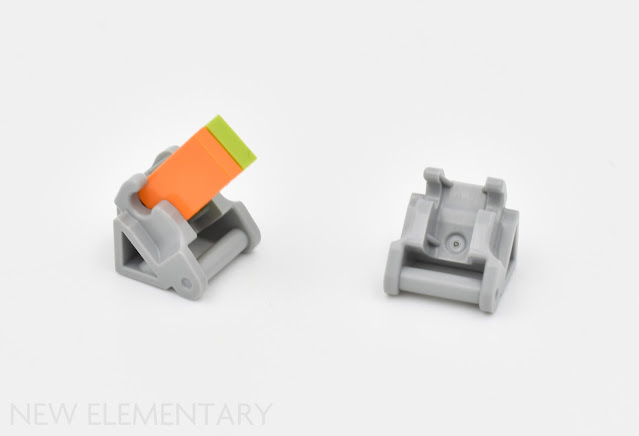 The recess on the underside is 2 plates wide. Interestingly, there are two pairs of small angled protrusions at either end of that recess, between which those plates can nestle as the pairs are spaced 1 module apart.

There's also a nice right-angled triangular recess on either side of the element. They give the element a potentially useful greebley quality for sure, but I wonder what we can jam into there… 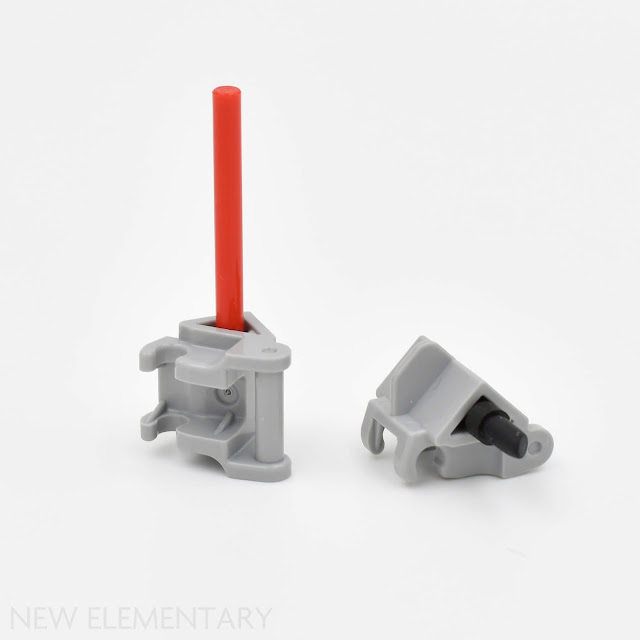 A 3.18mm bar is a slightly tight fit but not enough to cause any worry. A rubber lipstick piece fits a little more comfortably here.

The Escalator Links might make for some pretty menacing looking treads on say, a tank, or maybe the chain of a chainsaw? Unfortunately, the number of links in my collection prevented me from building a vehicle as large as a tank, so I settled for just one wheel instead. 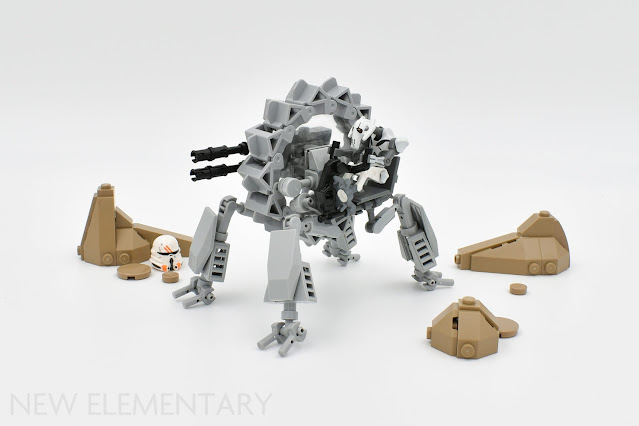 Coupled with a 6x6 dish, the Links make for a pretty well scaled wheel in this version of the cyborg's preferred mode of transport.

It wasn't difficult to construct a pair of hands using my seed element, and the clip and bar connections made them quite easy to integrate into this mech that might be the little brother of LEGO Ideas 21109 Exo Suit. 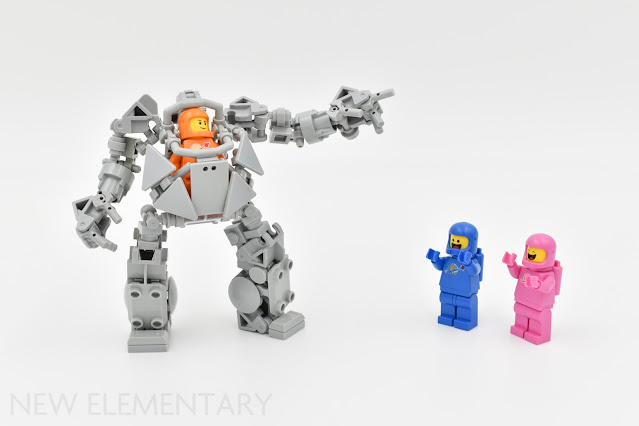 As well as being structural and functional in many places (they were quite useful to make joints in the legs and shoulders), the design of the element provides the model with some interesting mechanical details.

Unless I'm using this element as it was intended, I don't think it is one of those pieces that I'll be using out of necessity but as more of a novelty or perhaps a challenge.

Tom Loftus concluded last week that his Porsche Bows were undoubtedly specialized elements and I think I can safely say the same about the Escalator Link this week. This element only appears in two sets so far which isn't much of an opportunity to showcase this part's potential, so maybe I should reserve my judgments until it's a little more commonly used. Plus, seeing how Markus Rollbühler used it in the design for 71741 Ninjago City Gardens, I think there's a hint of some interesting uses for this part.

From our talks with the element developers over this series of articles, there is no doubt that a lot of thought goes into the design of these parts, and from what I can tell, this element works really well when used as intended. And working LEGO escalators are super cool. I'm looking forward to seeing a Modular department store building, to give this element its due.

Admin: Tim Johnson Posted on 10/20/2021 06:44:00 am
Email ThisBlogThis!Share to TwitterShare to FacebookShare to Pinterest
Labels: Inside LEGO, Interview, MOC, Technique