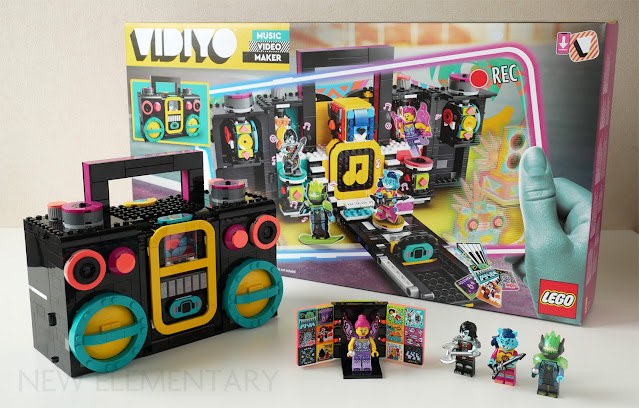 And then there was a surprise announcement that VIDIYO was getting a second wave, in quick succession, comprising two more BeatBoxes and five playsets of varying sizes. The biggest of them, 43115 The Boombox, is what I have to show you today.

Exclusive New Parts in 43115 The Boombox

When the publicity material was published a couple of weeks ago, a big stir was caused as AFOLs spotted that a rare new species had appeared - an odd-numbered 1-module wide plate! The set also treats us to a second new mould. 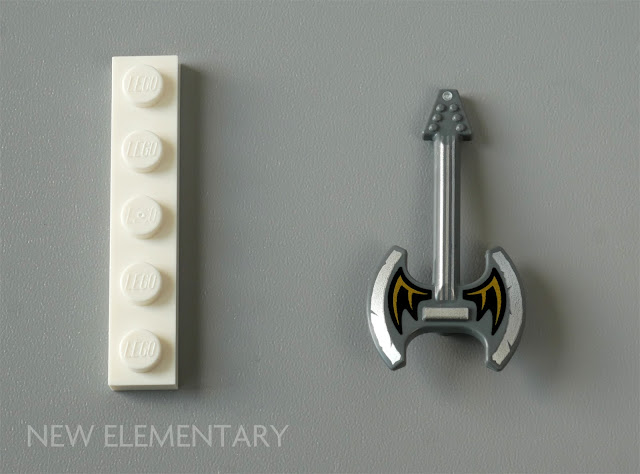 It's been a long time since LEGO last introduced a new 1-module wide plate; the most recent was 13 years ago. Here's a quick overview of the timeline of "1 by x" plates:

Why hasn't the 1x5 come sooner, especially given that competitor brands have provided it for some time? One reason may be that the custodians of LEGO System felt it may confuse younger builders. Distinguishing a 1x5 from a 1x4 or 1x6 takes a moment longer, potentially leading to errors that frustrate the builder. Another reason is that situations where a 1x5 is absolutely necessary are far fewer than a 1x3: you can make a 1x5 out of a 1x1 + 1x4, or a 1x2 + 1x3.

There are five new recolours included, four of which are unique to this release: 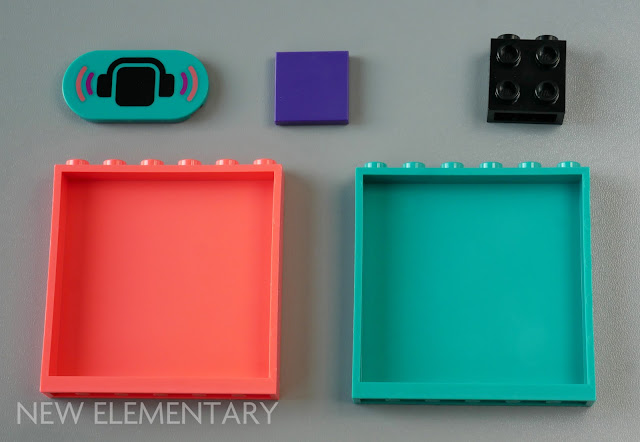 The first three elements were introduced as new moulds with the VIDIYO BeatBoxes in March, so I have listed them as rare for the purposes of this article. We will be publishing a full rundown of the BeatBoxes themselves soon. 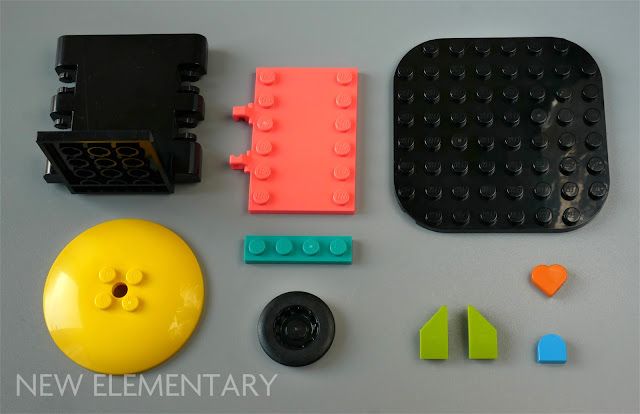 The VIDIYO line has already become notable for the lack of stickers, and the inclusion of colourful printed 2x2 tiles called BeatBits, each with a design that makes a special sound or visual effect when used in conjunction with the app. Each of the minifigures in this set gets their own new and unique design (pictured below), along with another 14 which are randomly selected from a pool of over 80 different designs for the range (not shown) - see our BeatBits Guide for more information. 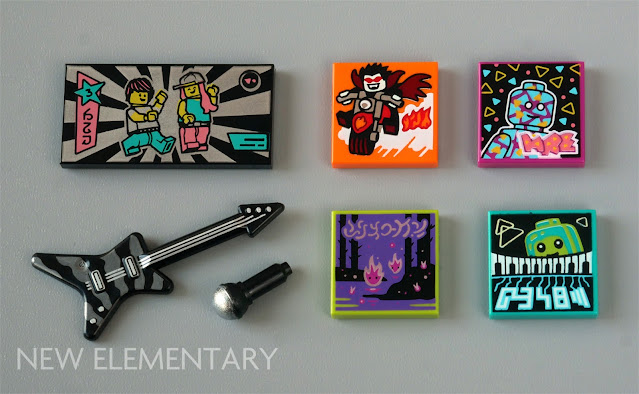 There are also three additional printed elements included in the set:

Minifigures in The Boombox

The whole VIDIYO lineup has already given us some unique minifigure characters, and this set is no exception.

From left to right we have:

The Leopard’s hair, Fairy’s wings and Alien’s head are all very nice pieces viewed from the rear as well, but they do obscure the rear printing a little bit for this picture.

So here is a closer look at the backs with head and wings removed.

I have to say that the vast majority of the printing on these figures, and indeed all of them from VIDIYO, have been top notch in terms of quality. LEGO has been criticised in the past particularly for the weak printing of light colours over dark backgrounds, but I would say they  have definitely sorted the issues out with these minifigures.

It’s quite difficult to see from the photos but I’ve tried to depict the lovely pale metallic blue on the fairy’s torso, the metallic pale pink on her wings and the opalescent effect on the Alien’s head in the above images. And it’s very difficult to photograph the glow of the Alien’s head under blacklight, but I did my best! These are all very much better in person than they look here. 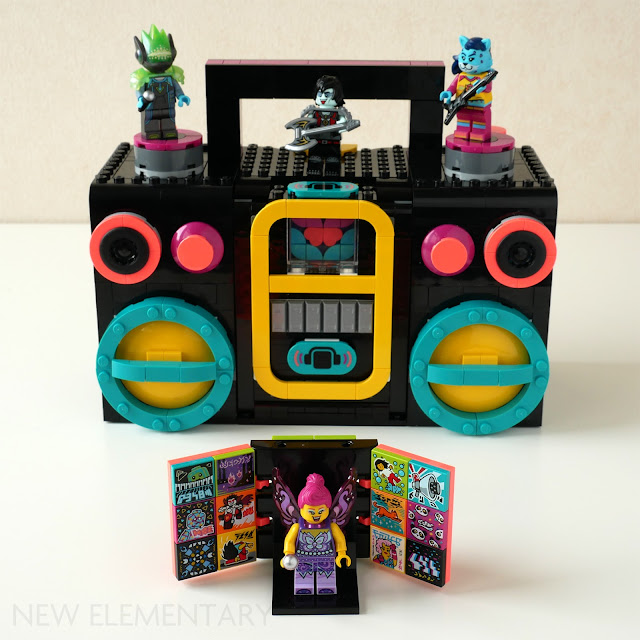 The build consists of seven numbered bags of parts, and proceeds in a fairly mundane fashion. There is a bit of SNOT construction for some of the rotating speaker stacks, but nothing out of the ordinary. The mirrored sides are a little bit repetitive but each is split into a separate bag so that parts are not confused. When finished, the box seems pretty solid. Despite it being quite heavy, I had no worries about carrying it by the sturdy handle which is cleverly integrated into the structure of the box. 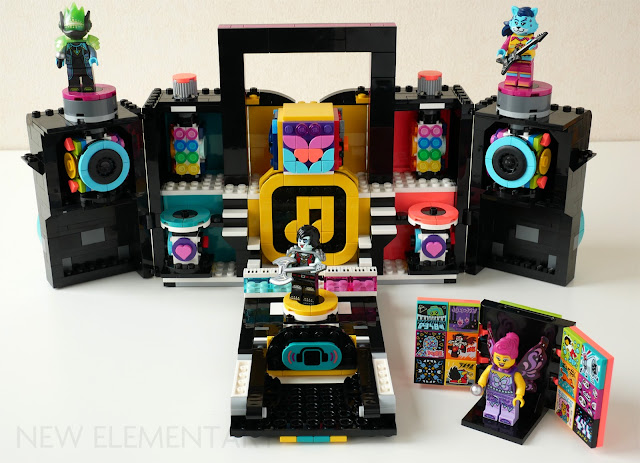 The front flips down and each side folds open to reveal several different “stages” where you can pose the various minifigures while you make your music 'VIDIYO'. 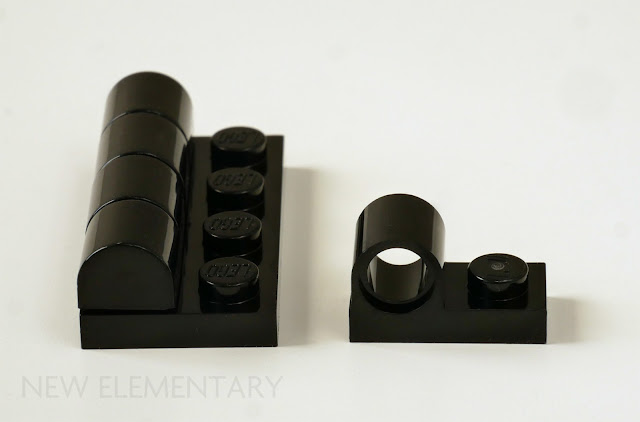 One thing I did find delightful early on in the build was how well the plate with double curved top 1x1 brick (49307) added to it provided exactly the same profile as this Plate Special 1 x 2 with Pin Hole on Top (11458). They sit next to each other to provide the hinge mechanism for the fold-down front flap. It had never occurred to me before how well they would match up, but I should have known it would be perfectly within the System that our clever Danish friends have devised. 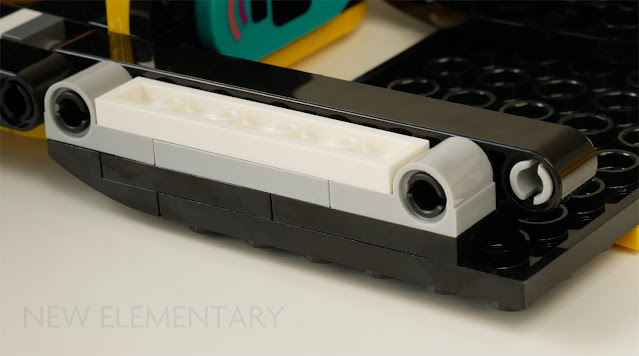 And talking of the front flap, that is where the new 1x5 plate is used to strengthen the underside of the run of a 1x3 plate between two Plate Special 1 x 2 with Pin Hole on Bottom (18677) pointing in opposite directions. Couldn't they have used a 1x2 and 1x3 plate instead? Or even Technic Plate 1 x 5 with Smooth Ends, 4 Studs and Centre Axle Hole (32124) in its place? Perhaps for an AFOL’s MOC that would have been perfectly acceptable, but we know that LEGO have exacting high standards when it comes to build stability, so perhaps this was the excuse they needed to finally release a 1x5 plate after almost 60 years? At New Elementary, we love new elements, so we are definitely not complaining about that! 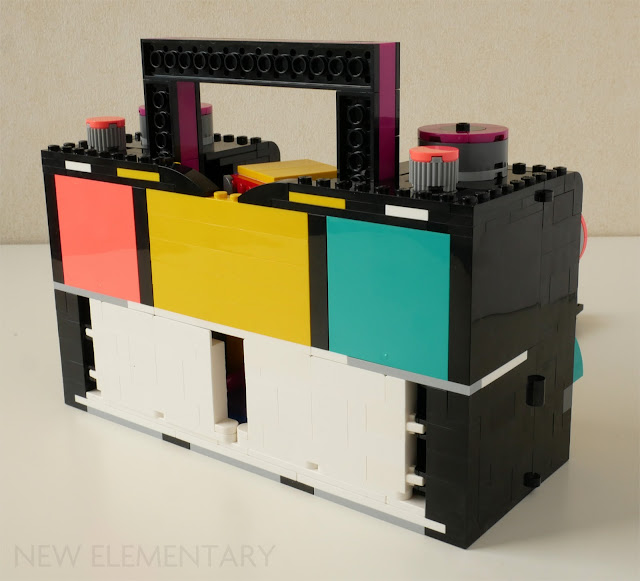 I was disappointed by a couple of aspects of the finished boombox, however. The rear has quite large gaps at each end where the click hinges are attached, and an even bigger gaping hole in the middle! I know you need to get hold of the rear doors somehow, but I think having this large vertical slot looks pretty ugly. And if you are storing any of the minifigures or other accessories in the box while in transit, they are very likely to fall out of this hole if you’re not careful! I wasn’t keen on the unsightly stripe of white plate which breaks up the side walls either. 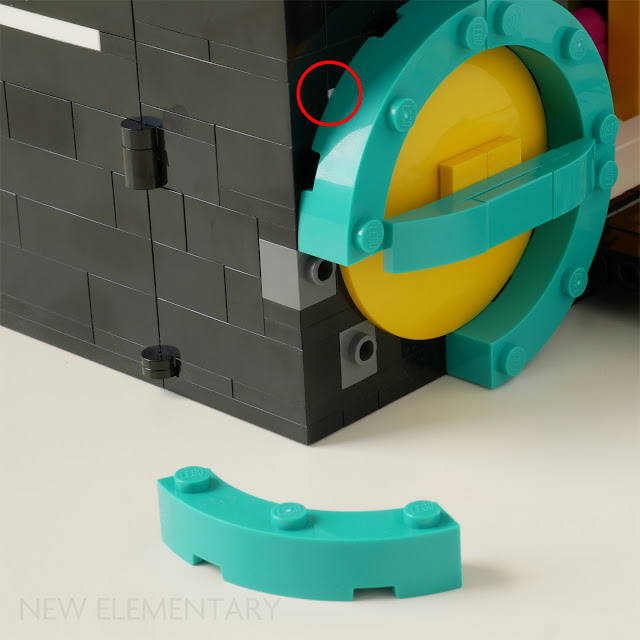 But even that wasn’t as annoying as the use of Dark Bluish Gray SNOT bricks on the front of the boombox, used to attach the large macaroni bricks which surround the speakers. They break up the colour of the sides with a jarring block at the front edge, and you can also see a small triangle of the wrong colour poking out from behind the middle of each macaroni on the front. Why not use black? They are perfectly common and it would have finished things off so much better. 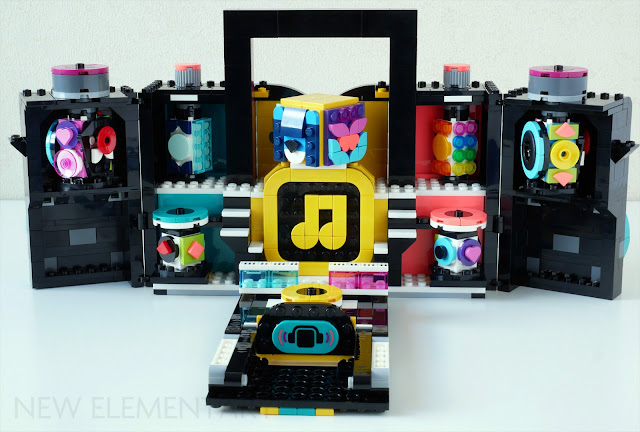 I have not tested the Augmented Reality aspect of play with this Boombox, as it is not available yet (and New Elementary’s readers are mainly interested in hearing about the new parts which the set might offer anyway). But from the various depictions in the instruction booklet, it’s clear that each of the rotating speaker stacks will provide different effects in the app depending on how they are set in the real world. In this picture, I have attempted to show all the variations by turning each stack to a half-set position. The large head above the musical notes in the centre also has two more positions to choose behind the ones shown. 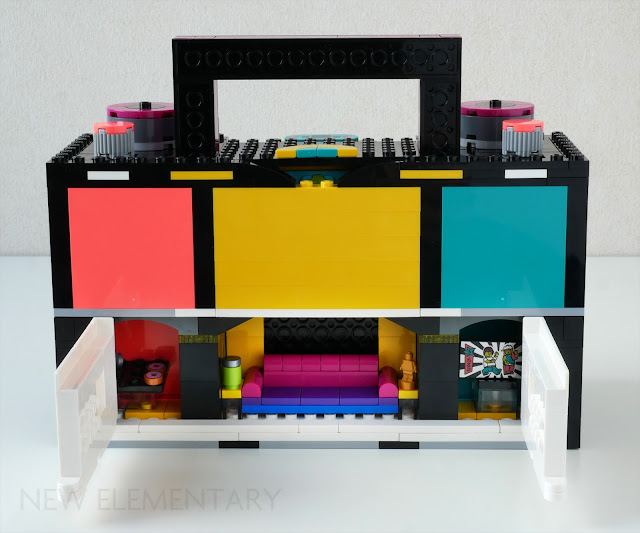 When your aspiring minifigure rock stars need a break, they can relax for a bit backstage. The rear doors open to reveal a comfy sofa, large screen TV and a table with snacks on top which can all be brought outside for easier access during play. The two side cubby holes are pretty hard to get adult fingers inside, but I assume kids with smaller hands will not have such problems. One final point is that all those shiny black bricks are really good at picking up the slightest bit of dust or fingerprints, so you may have to get your polishing cloths out to keep this boombox looking spick and span!

The Boombox is the largest set in this wave of the VIDIYO theme, which is due for release on 1 June 2021, and in North America on 1 August. (The new Bandmates will be available from 1 October.) The pricing will be £89.99 / US$99.99 / € 99.99 for 996 pieces, giving an average price to part cost of 9p / 10c. The piece count seems to be slightly on the low side when compared to other sets at this price point, but you do end up with a substantial model which does not feel like bad value for money once built. The play features, especially when using the set in conjunction with the app, will keep kids amused for a while. AFOLs will be more interested in the parts, and on that criterion it scores quite well, with a good mix of useful bricks plus some interesting or rare recolours. The minifigures are particularly good, with some fun characters, excellent graphic designs and great quality printing. 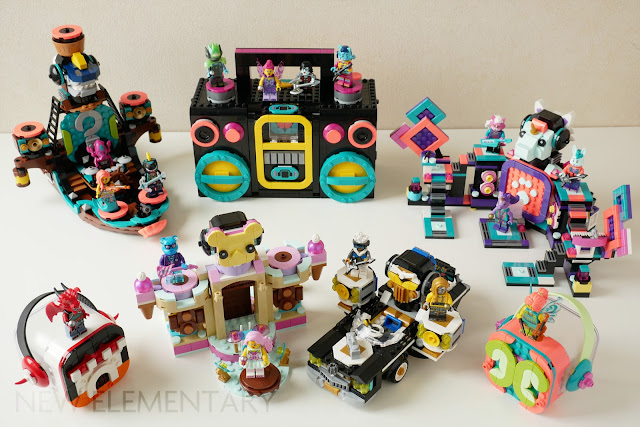 We have the rest of the sets in the current release as well, and we will be reviewing them in the near future, as well as taking a deeper look at the new elements which first appeared in the BeatBoxes. If you're buying this set, or anything from LEGO.com, please consider using our affiliate links, New Elementary may get a commission: UK LEGO Shop | USA LEGO Shop | Australia LEGO Shop, for other countries 'Change Region'.

READ MORE: Which recent LEGO® sets have the most new parts?