Eero Okkonen (@eerookkonen) examines 3 upcoming 2021 LEGO® Friends sets for you today. Buying them when they're released on 1 June 2021? Consider using our affiliate links, New Elementary may get a commission: UK LEGO Shop | USA LEGO Shop | Australia LEGO Shop, for other countries 'Change Region'. Products in this article were provided by LEGO; the author's opinions are their own. 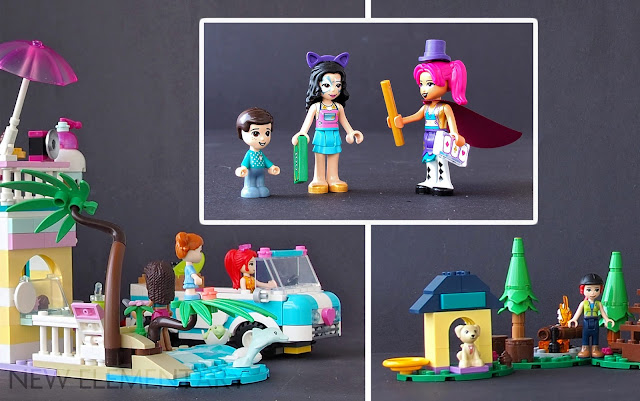 Funfair magic, beachfront surfing or horseback riding? Today you can enjoy them all, as we review three LEGO® Friends sets being released in June: 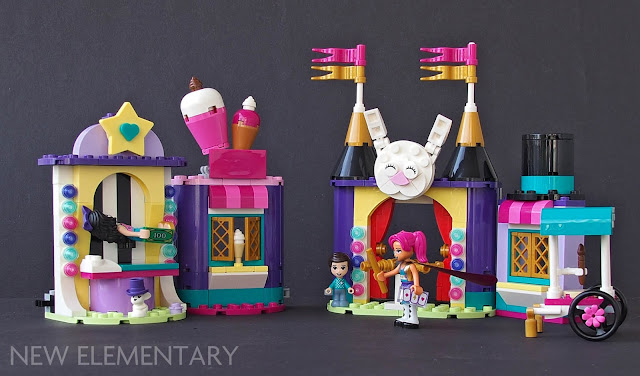 This set is among the smallest ones in the 2021 Friends subtheme Magical Funfair. It consists of small, separate structures that can be connected via clip hinges. The magic trick stall works fine, with the hand-held bar disappearing into the high-contrast black and white background. The ice cream stall is very simple, brick-built ice creams being the most interesting part of it. There is also a small, basic ticket stall and a face-paint wagon, which badly needs stickers to make sense. The gate is relatively robust, and I like the 45 degree rabbit face, hares being an apparent feature of the funfair subtheme. However, as a play element, it feels a bit dull. Gate structures have large symbolic meaning, but there isn’t much to play with them. Maybe it would have made more sense as a side-build of a larger set? 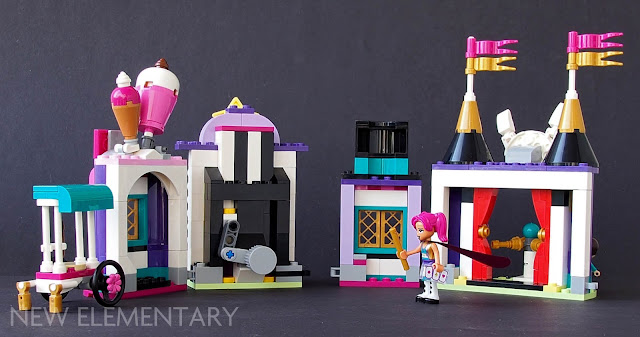 Overall, the colours of this set are exciting and inspiring; I think the Spring Yellowish Green/Yellowish Green elements give a nice magical night-time feel. There are plenty of Glow-In-The-Dark-Opaque 1x1 round plates to see by before the light dawns. However, their mildly greenish glow overrides the purple and blue shades on the top. 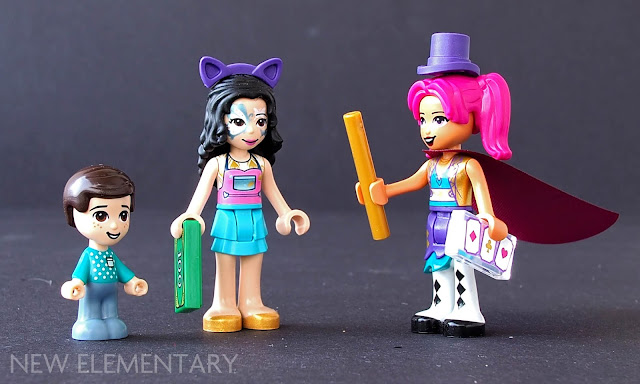 The minidolls; the new hair ornament pieces, the cat ears and top hat, are new, as well as the playing cards print and the new cape. More about them in the next section. 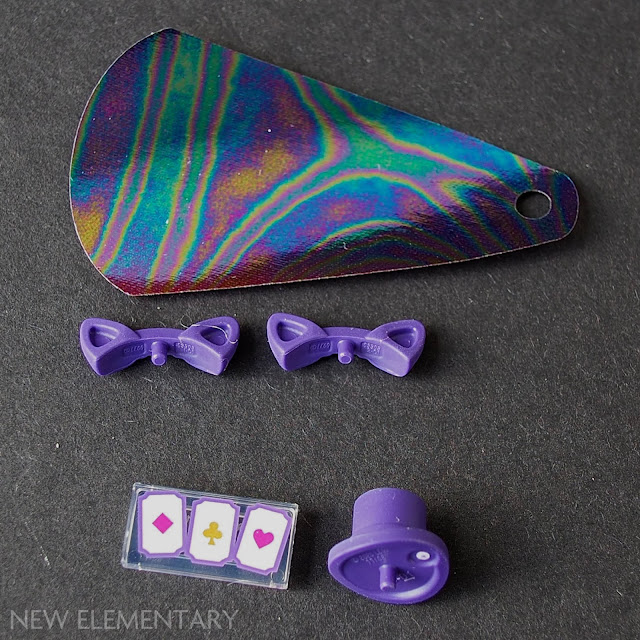 The cape is exciting! It has a sort of oily, rainbow shine. It is very rigid, and certainly not flowing as seen in the official pics, but I’m sure it offers completely new possibilities for older children and hobbyists. I’m thinking about an oil splat, bleeding from under an old car.

The top hat in Medium Lilac/Dark Purple (6353142) has an antistud on the top and a 1.5 mm bar - aka plume connection - on the bottom. This makes it a unique adapter part: 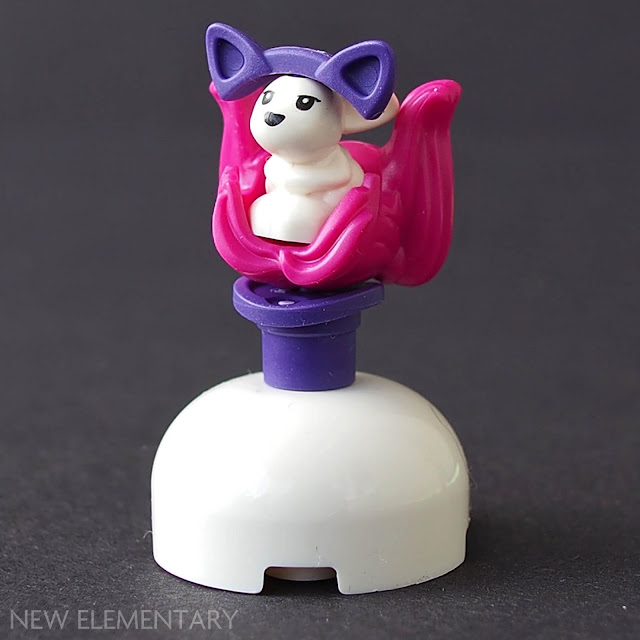 It can be worn by minifigs with a plume hole on their hairpiece for ornaments, plus by a variety of Friends animals. I’m sure steampunk builders will be excited by it. It appears in Dark Purple in every set of the Magical Funfair subtheme, and hopefully in Black somewhere in the future. 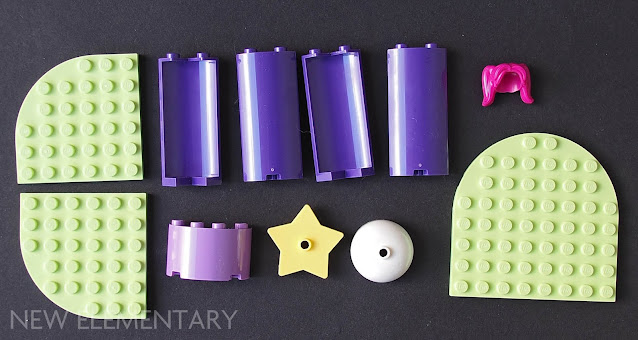 The star piece feels most exciting, and you might be inspired by the creations our builders in our first 2019 Parts Festival came up with. It appears also in several other sets of this subtheme. The 3x3 dome - which looks identical to a 3x3 dish in my picture - debuted in White recently on 21056 Taj Mahal and also in the last set I’m reviewing here, 41693 Surfer Beachfront. Again, it was used as a seed part, in our second 2019 Parts Fest.

Rare and interesting parts in 41687 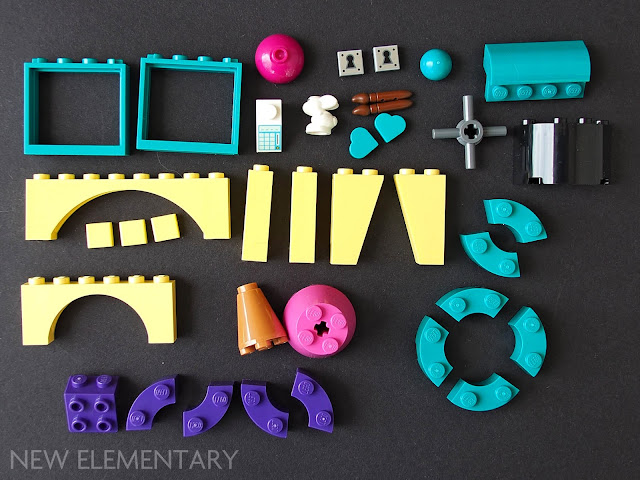 Technic Axle Connector Hub with 4 Bars at 90°, Reinforced Axle Hole (6316692|68888) is actually a new mould with a change to its function: it was updated in 2021 set 75299 Trouble on Tatooine and now features a through axle hole, instead of a tight axle connection on one side and Technic pin connection on the other. It certainly feels very satisfying! Although perhaps irritating for some to lose the pin connection. 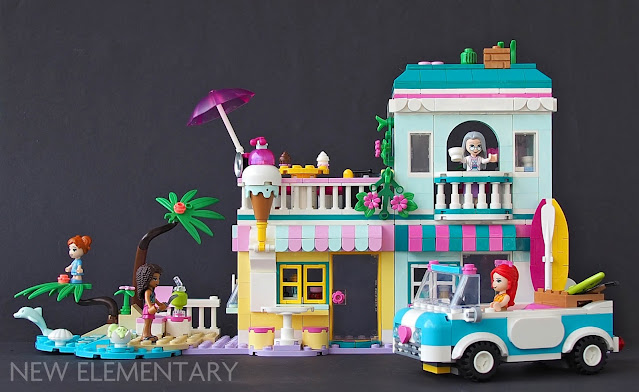 This set features a strip of a holiday town, somewhere by the sea. The set felt oddly familiar, and it took a while to realize that it reminded me of Paradisa sets from the 1990s: not only thematically, but also with its pleasing scheme of pastel colours. However, it lacks men sporting moustaches and underpants. 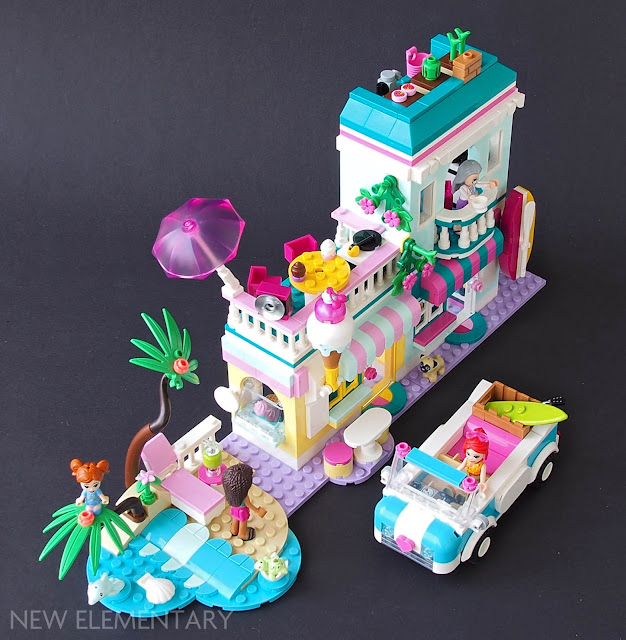 The car is the only side build and the rest is connected, making a coherent whole. The ice cream café and surfing shop/apartment are connected with Technic pins, to be easily detached and rearranged. The Lavender stone looks surprisingly good, not realistic, but somewhat fitting. The wave washing the beach is made with curved slopes and 1x1 quarter round tiles. The effect works well. On the surface there are a hovering dolphin, clam and half-hatched turtle; such phenomena happen at the seaside all the time. 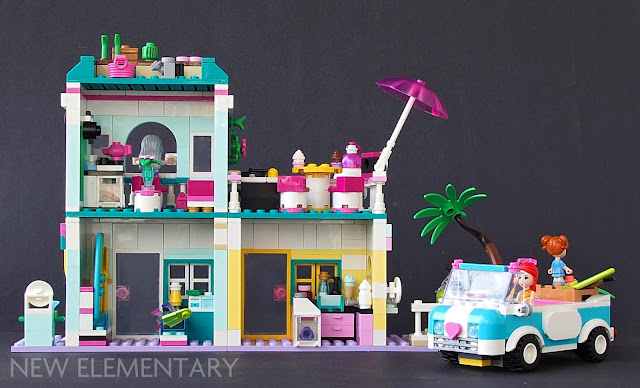 The interior is clean and coherent, if not very spacious. The roof garden is a nice addition, featuring a wonderful watering can design that also uses many useful parts. The car is the worst part of this set; while it fits nicely all the four minidolls in the set, the front is far too high up, glaringly exposing the seemingly useless yellow 1x2 plate. It’s also very unsatisfying that the driver can’t reach the steering wheel. Don’t try this at home! 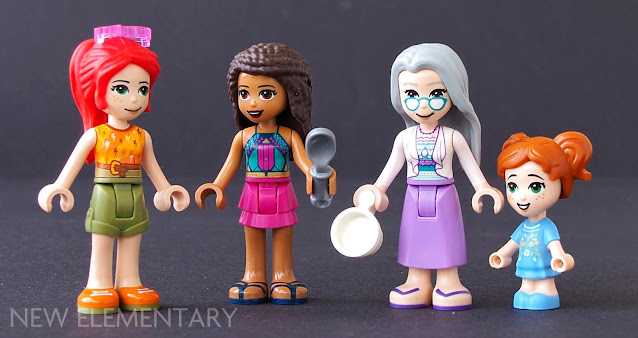 It is nice to see three generations of women in a set. The Grandmother uses Dumbedore’s hairpiece (36806). 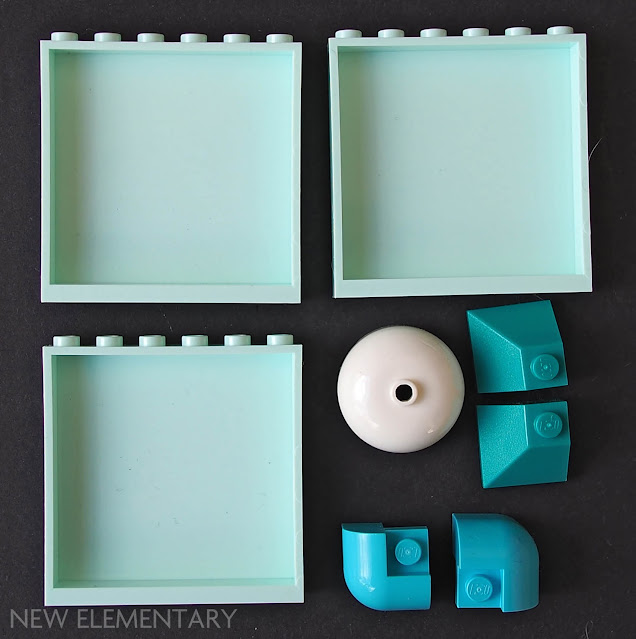 While the recolours are few, the corner curved slope is worth highlighting due to being an extremely pleasant part. The Aqua/Light Aqua 1x6x5 panel is surprising, as that colour has been relatively common in Friends sets for some time. While it’s not terribly exciting, it certainly makes raising aqua buildings faster.

Rare and interesting parts in 41693 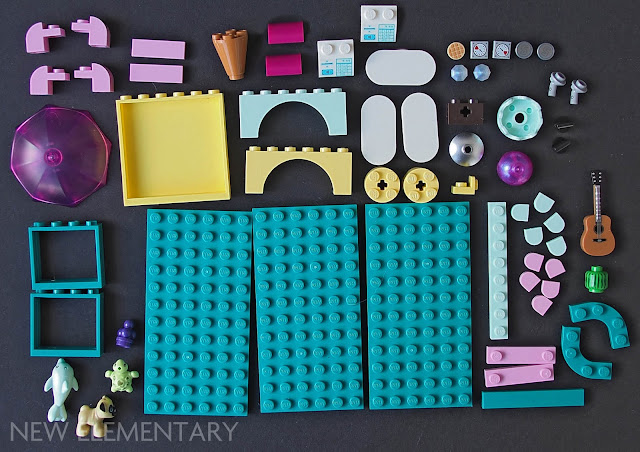 Despite there being only a few recolours, there are still plenty of interesting bits in this set. I’m particularly excited by 3x3 macaroni plates (69568). This is the second time they appear in Bright Bluish Green/Dark Turquoise; their first appearance was on  41445 Vet Clinic Ambulance, and the mould was introduced last year. 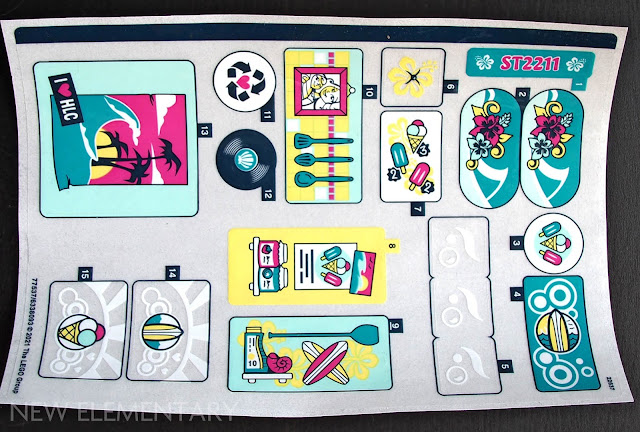 The poster is nice, as well as the floral prints, but shelves, jars and kitchen equipment would have been better as the actual object. The LP sticker is a nice addition, but lacks a dot in the middle to represent the hole! It might be a bit hard to play this one. 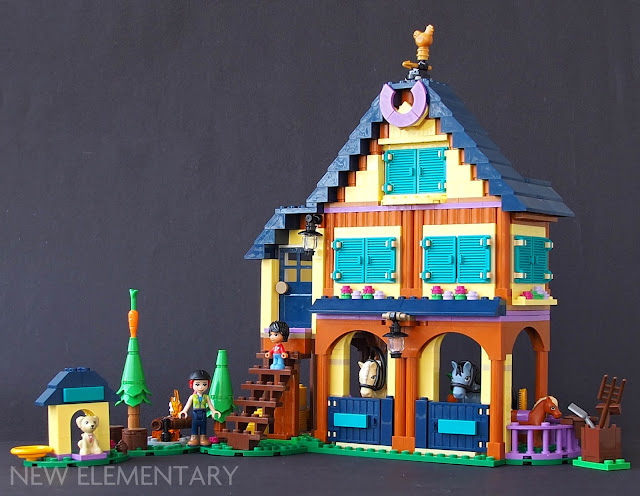 The set consists of a tall building with stables on the ground floor and living quarters elevated above them. There are also the usual little side-builds: the dog’s kennel, a campfire setting, and a box with tools. The new trees are among the most interesting things in this set, as well as 41677 Forest Waterfall. They look very nice, reminiscent of the classic one-piece 1970s LEGO spruce trees, while consisting of useful pieces. Sorry about the misplaced carrot.

The colour scheme is pretty good - not the most pleasant combination, but good colours on their own. There could have been more depth difference between the elements, such as the Dark Orange pilasters and the Cool Yellow/Bright Light Yellow window fields. Oddly, the attic window is embedded by one module. The ridge of the roof, the pinnacle, is also a letdown; the weathervane is a nice touch, but would have looked much better on a spire of some sort. That surely would not have taken many pieces within the budget, yet would have crowned the building. 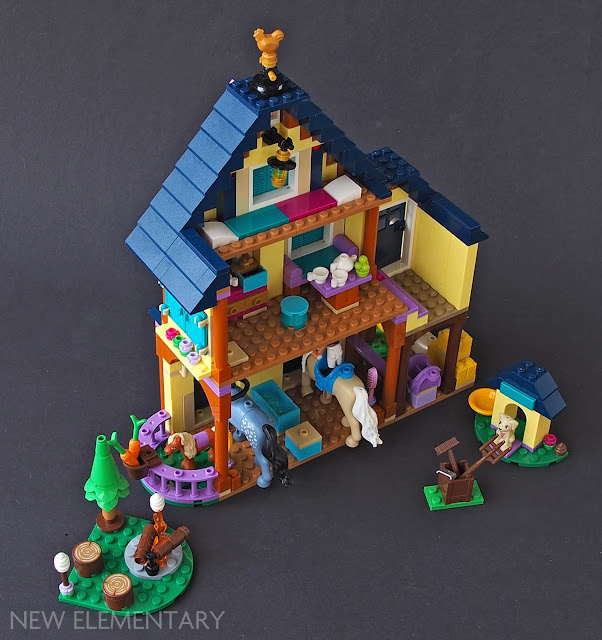 The interior has a good balance between detail and clarity. The roof has been cropped to ease playing, but this has been done elegantly, without looking cluttered.

What is interesting about the building to me is its similarity to a traditional Carelian house. These buildings of the Finnish people living in Karelia in northwestern European Russia had the basic idea of hosting both people and  domesticated animals under the same roof: as in Forest Horseback Riding Centre, they usually had an external stair on the side and a tall, ornamented gable. However, they were large structures, compared to this rather thin, 8-module thick set. This all is probably just coincidence, but interesting anyway. 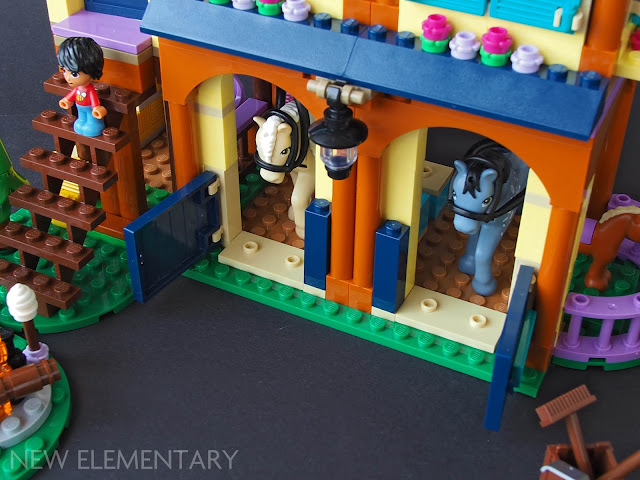 The biggest problem is in the stable: behind its doors there are 2x4 jumper plates to prop the doors, but the raised hoofs of the horses collide with them, forcing them to stand with the backmost hoof out of the stable! This is very irritating, as it means that the horses stand only with their right hoofs. I reckon this could have been fixed by replacing the 2x4 jumpers with usual 1x2 jumpers. 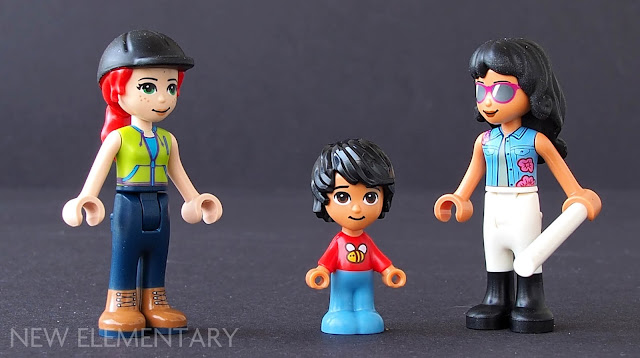 Savannah, who is visually-impaired, is a good addition to the minidoll range. She appeared first in 41446 Heartlake City Vet Clinic, released in January. 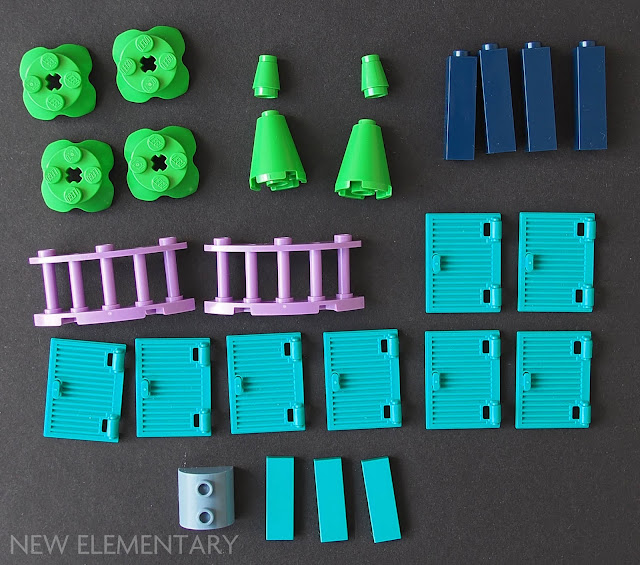 The round plates with leaf extension are the most interesting recolour. While they make excellent trees, flowers and such, they have plenty of potential for character building; I like to use them on sleeves, for example. The Bright Bluish Green/Dark Turquoise window shutter feel fitting for Mediterranean settings.

Rare or interesting parts in 41683 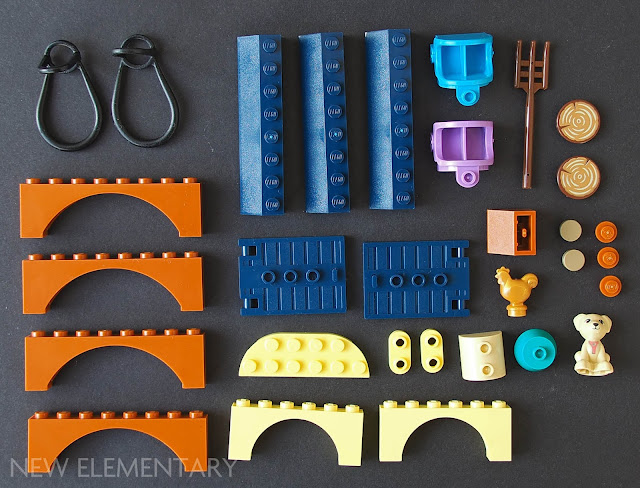 The bridle part (93087) works well on usual LEGO horses, too! Two are included. The most interesting pieces are Cool Yellow/Bright Light Yellow 1x2 round plates, previously appearing only in 10271 Fiat 500. 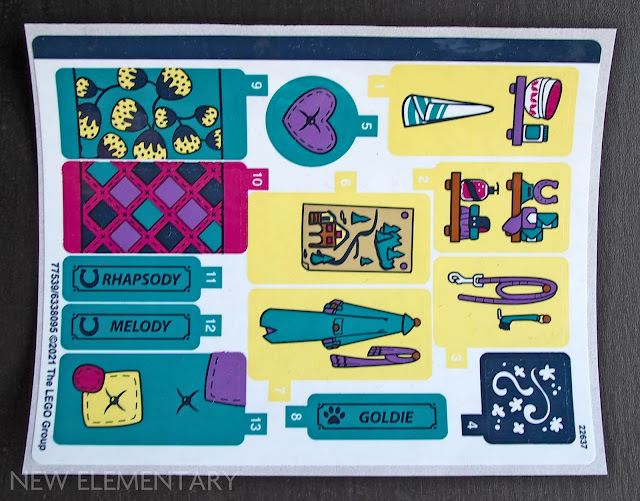 The shelves, cups and hoses would have worked better as physical objects but the textile prints, especially the turquoise flower pattern, are very nice.

The horse with neck joint is new in 2021 and has already appeared in 41446 Heartlake City Vet Clinic. However, these colours and prints are new. 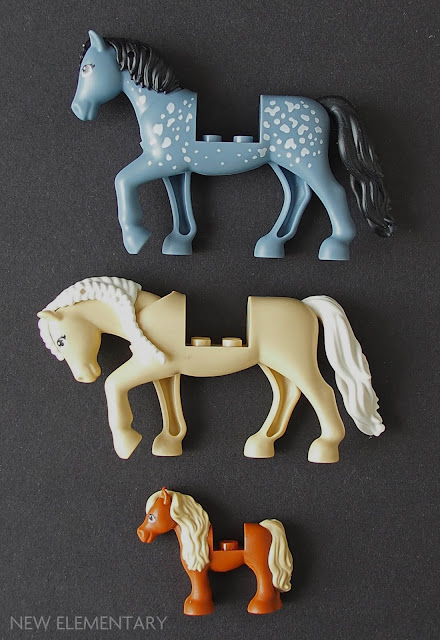 The Tan horse has a braided crest. The crest and the tail are separately moulded rubber elements (they cannot, sadly, be separated). The pony has the same mould as the ice horse in 43189 Elsa and the Nokk Storybook Adventures, but appears here for the first time in flesh and blood. The crest and tail are dual-moulded, but not rubbery. 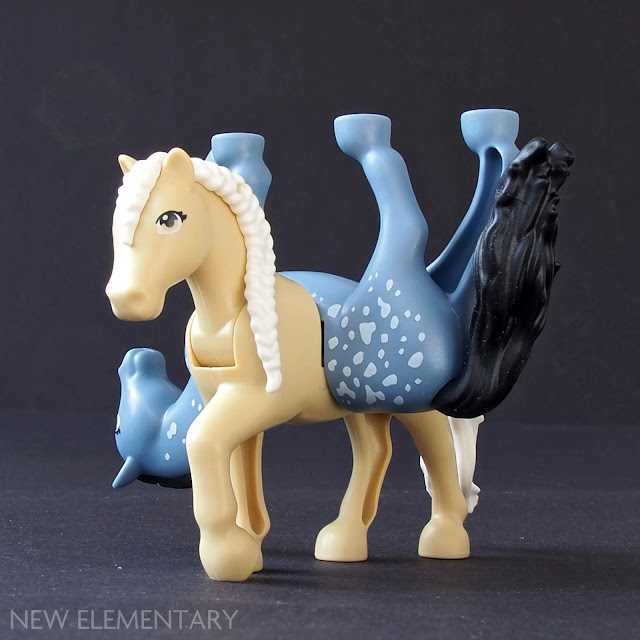 Due to the large size of minidoll feet, the horses have a 2x2 module gap in their backs, meaning the horses can be used for creating interesting 180 degree SNOT connections.

I think these horses in their unusual Tan and Sand Blue colours work well in a non-minidoll setting. LEGO animal aesthetics have generally been getting rounder and smoother over the years, so they don’t look that out of place. 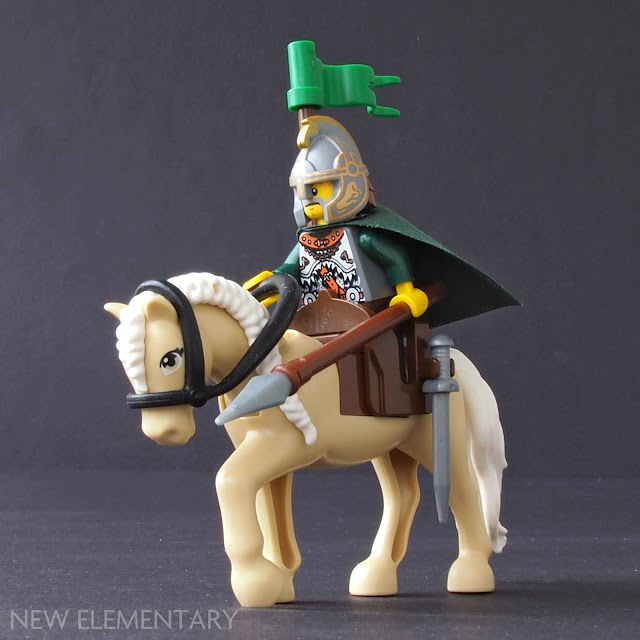 Their dual-moulded tails and crests are also more attractive than their usual minifigure-world counterparts. You only have to get past their large, beautifully lashed eyes. But then again, real-life horse eyes are quite big.

The 2x2 gap on the back offers more possibilities than the usual horse’s 1x2 gap. It’s rather hard to have two riders on them, even though sharing a saddle is quite common in a fantasy setting - think Gimli and Legolas, Pippin and Gandalf, Merry and Eowyn. 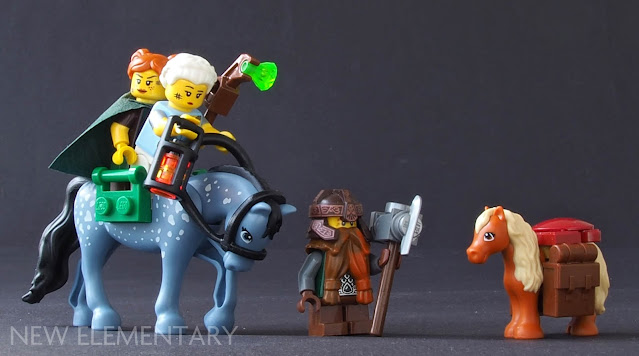 My saddle design is not very polished, but you get the idea! The pony is pleasant and pretty, and works well as a little stout pack-pony for dwarves and hobbits, for example.

These three sets from the Friends summer line don’t offer many new moulds, but they have interesting colour schemes, good recolours and above-average set design. The builds don’t use any special techniques, and they are definitely play-oriented. The 41693 Surfer Beachfront has an especially strong holiday atmosphere to it. 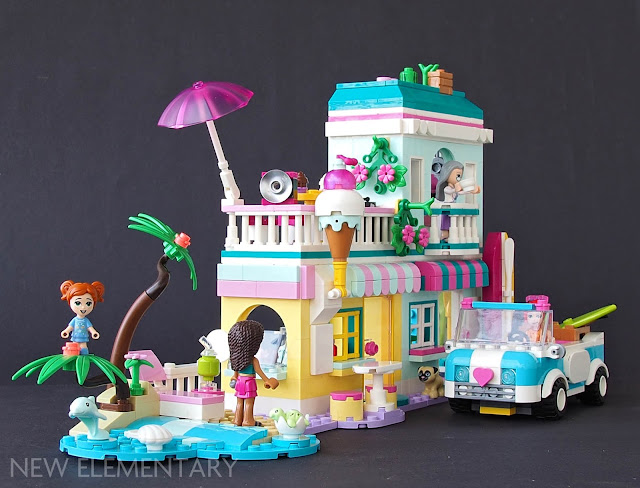 In an open-minded builder’s hands the pieces can be anything - especially, do not overlook Friends horses! They are powerful plastic beasts of burden.