Aron Gerencsér (@_pohaturon) resumes our 2021 LEGO® Monkie Kid reviews today with 80023 Monkie Kid's Team Dronecopter. Buying this set? Consider using our affiliate links: UK LEGO Shop | USA LEGO Shop | Australia LEGO Shop, for other countries 'Change Region'. New Elementary may get a commission. The products in this article were provided for free by LEGO; the author's opinions are not biased by this. 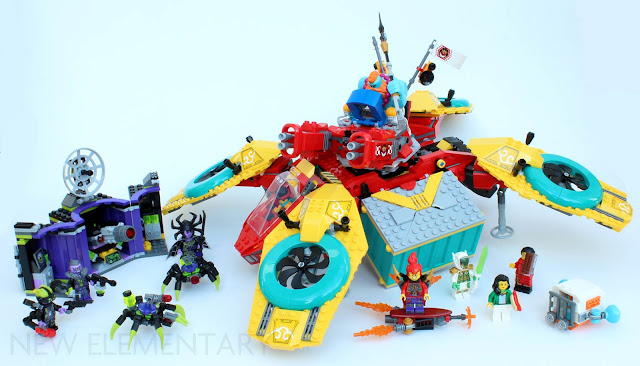 For a set this large, 80023 is pretty light on new moulds that we haven't already covered in previous Monkie Kid reviews. We have the new minifigure hairpieces (covered later) and that 90° bend bar holder piece, shown below in black - which we now know is called 3.2 Holder W/ 3.2 Hole, 90 Deg. by TLG. Monkie Kid's Team Dronecopter contains the highest quantity of it in Black (6338384 | 72869) with 16 of the element included!

So let’s instead focus on the other new-for-2021 mould present. 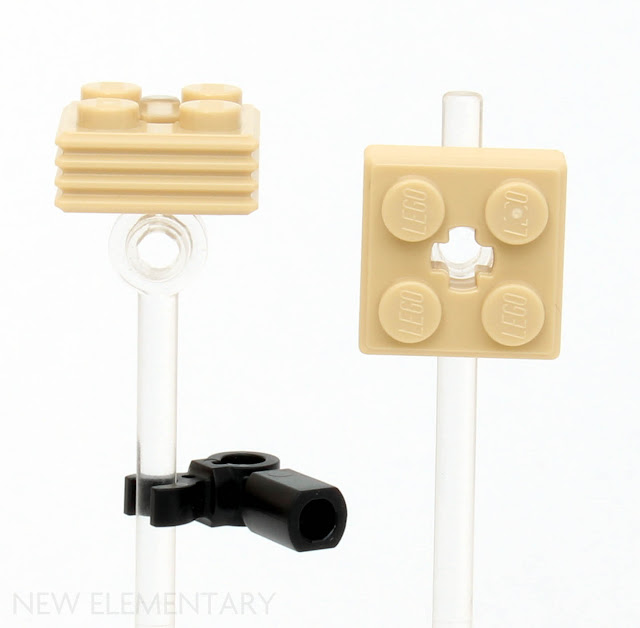 Four instances of Plate Special 2 x 2 x 2/3 with Axle Hole and Grille on Sides in Brick Yellow/ Tan (6330903 | 71752) appear in 80023. Called Design Plate 2X2X2/3 No. 1 by TLG, this mould is new for 2021, appearing across five LEGO City sets – two in Tan and three in Black. Its tan appearance in 60287 Tractor, coupled with the ridged texture, has earned it the nickname “the hay bale” already. The piece is only 2 plates tall and covers a 2x2 footprint, with an axle hole going through it vertically.
The ridges follow the dimensions of the horizontal ridges on one side of Brick 1x2 with Grille (2877), and we imagine they will often be used in unison as detail work on buildings. By stacking three of them you can match the height of two grille bricks, although you get a slight gap where the two kinds of ridged brick meet.

For structural purposes, it does little that a pair of 2x2 Round Plates with Axle Hole couldn’t - that said, I’m curious to explore what unusual purposes I can find for the ridges.

While not really outstanding in the new mould department, 80023 Monkie Kid's Team Dronecopter is an absolute goldmine of recoloured pieces (as well as rare ones, but more on that later) with 14 parts appearing in new colours - and the best thing is that most of these appear in force! 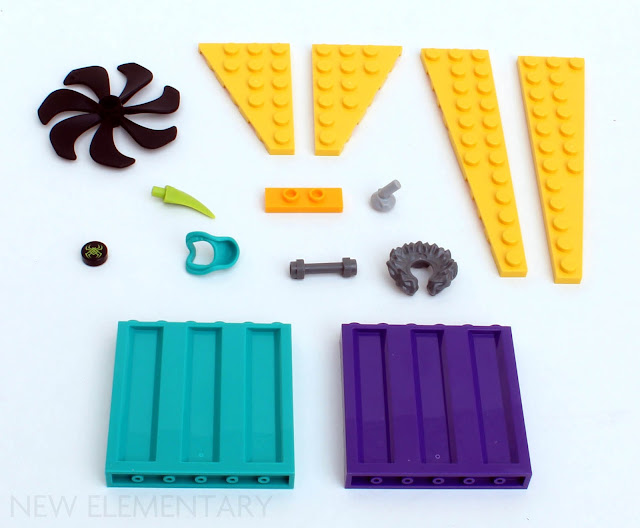 I was surprised to learn that the propeller piece hasn’t appeared in black before - as one of the most widespread and ubiquitous colours, it's always interesting to see black recolours. Personally, the light grey Handle No. 1 is the recolour that I see myself getting the most use out of, however with just one appearing in the set I will need to source some more.

80023 also features a decent crop of less common elements, one in a particularly high quantity too. 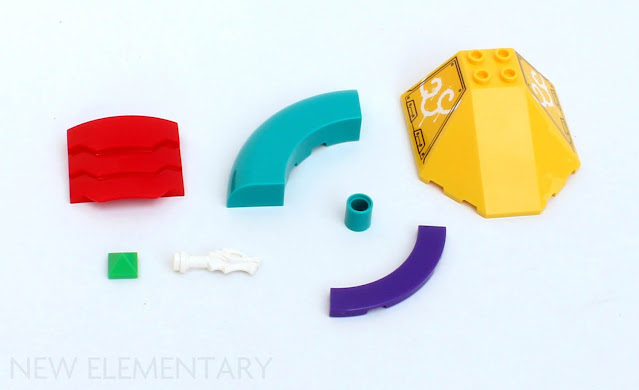 80023 Monkie Kid's Team Dronecopter comes with a selection of 8 traditional minifigures, one bigfig and an animal.

Interestingly this, as opposed to 80022 Spider Queen's Arachnoid Base, is the set which includes the full set of Spider villains. Red Son appears too, as does Mei who has her helmet this time around, unlike in 80020 White Dragon Horse Jet. 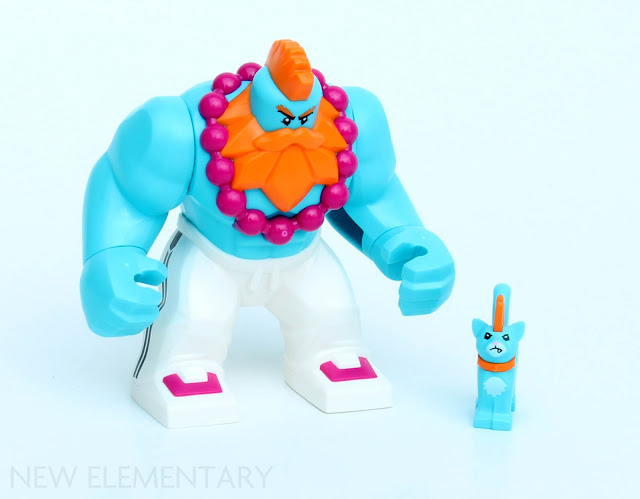 Sandy appears together with his adorable blue punk cat, Mo.

Among these figures we find two new moulds, both of which are hairpieces. Huntsman sports Mini Wig, No. 230 in Dark Bluish Grey (6338388 | 75512) while Syntax wears Mini Wig, W/ Accessory, No. 21. dual molded in Dark Bluish Grey and Lime (6341483 | 76860). We’ve shown these off in previous reviews where these characters appeared, but are including some new angles this time around:

I can see the braided design being used for Viking minifigures in the future when it starts appearing in more colours.

80023 continues the trend set by previous entries in this Monkie Kid wave of having some fantastic side builds as appetisers for the main course. The set includes 14 numbered bags, and we don’t get started on the large Dronecopter itself until bag 7. We start off by building the container-based “rooms”. It’s nice to see this callback to the container ship from last year’s 80013 Monkie Kid’s Team Secret HQ. 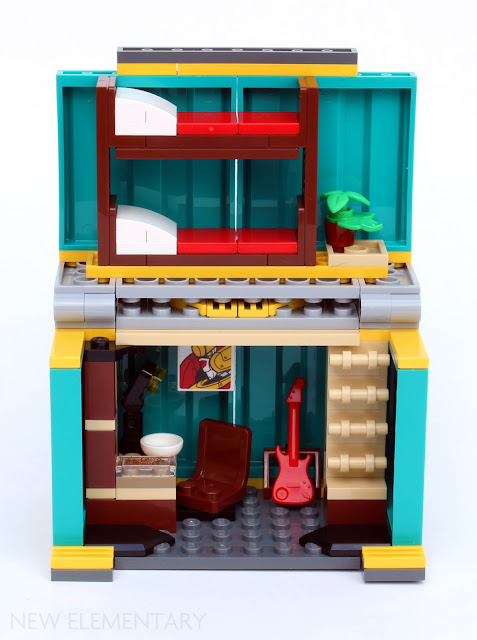 All of the container builds open up in different ways, allowing the interior to be accessed, and have clips on the outside which will allow them to be attached to the Dronecopter. These side builds are fun but straightforward, without any particularly interesting techniques to discuss - though I like how the bunk beds are attached upside down to the ceiling of the first container.

Sprinkled in between the three container builds are two small vehicles - a flying board for Red Son, and my personal favorite; a flying pet carrier for Mo. These are small and, again, do not feature any interesting building techniques but are fun little diversions. That said, there isn’t any monotony to break up, as all three containers are vastly different.

I’d have to say my favourite of the three is Mei’s room, which opens up to the greatest degree and has the most character in my opinion. The various sections of her room include a television, an arcade machine - which, owing to its compactness, does not function unlike the one in Ninjago City Gardens - what I can only assume is a weapon recharge station, a comfy armchair with a drink holder and a little utility corner with a fire extinguisher and a place to store her helmet. 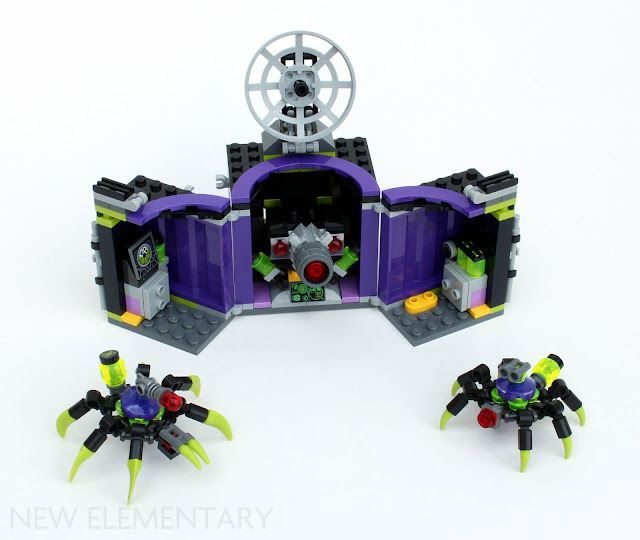 The villain’s container unfolds to reveal a large cannon with a pair of spring loaded launchers, some terminals and a large radar dish. The way this particular build mimics the handles on actual shipping containers paired with the cannon gave me a strong sense that I’ve seen a similar design appear in the back of a truck in Knight Rider. We also build two of Syntax’s spider drones that have appeared in droves throughout the wave already. 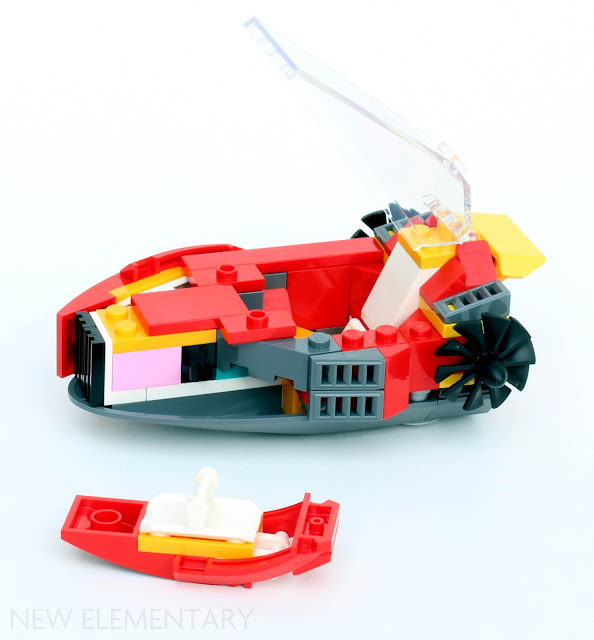 With the side builds complete, we move onto the Dronecopter itself, starting with the cockpit section. This little portion of the vehicle can detach and function independently as a sort of submarine, so we build the whole module in one go. The way the designer achieved the curved angle in the front section using a white minifig shield piece (30166) attached to the clip is rather intuitive. This piece is proving popular with LEGO designers, as Thomas Jenkins discussed with Bonsai designer Nick Vas recently. 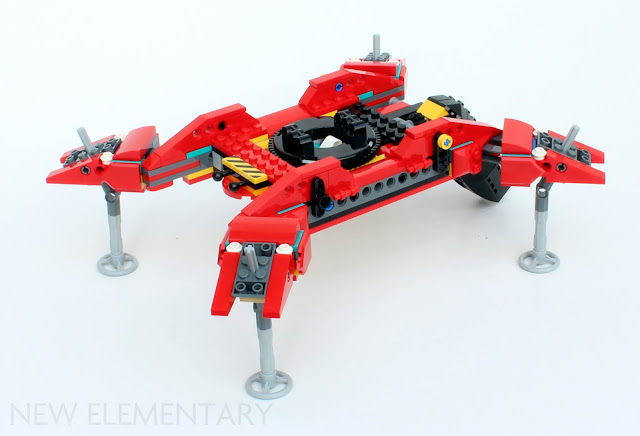 Moving on to the structure of the Dronecopter, there is quite a bit of repetition going on. We mirror two sets of angled armatures which will carry the four identical engines, and start to construct the gear mechanism that will control the rotating turret. The four steering wheels attached to Technic connectors act as feet for the vehicle, and I was initially concerned about stability as they were mounted on Technic bricks flopping to and fro on pins, but later on the engine sections helped make them sturdier. For the sake of convenience, the instructions don’t have us attach the cockpit section yet. 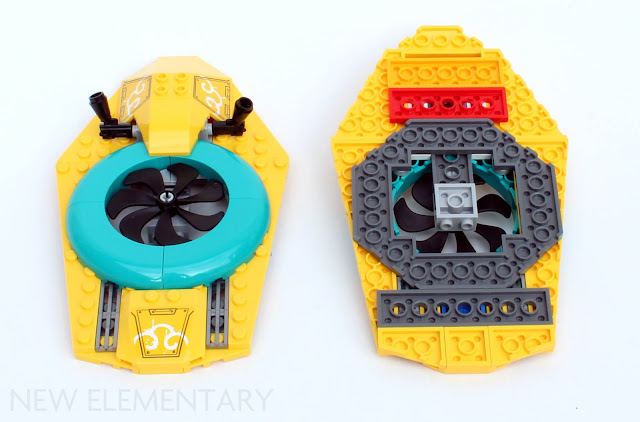 Next up, we build the four engine modules, each of which are identical. These engine units are pretty standard, built studs-up and slot onto the exposed Technic axles jutting out of the armatures we built earlier. 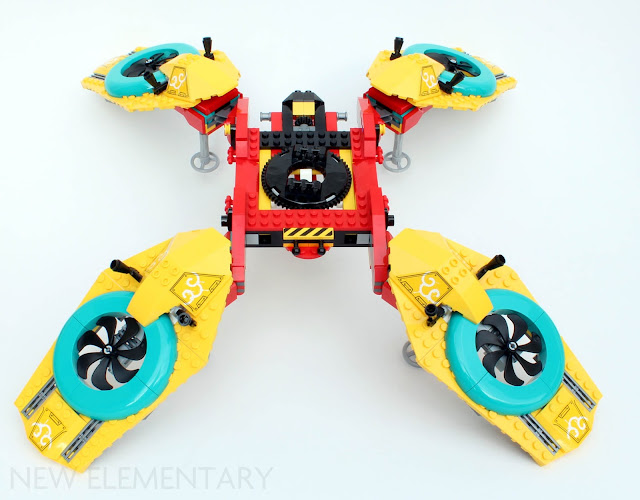 Once the engines are attached we move onto the turret section. A platform slots onto the large geared turntable, and is fixed in place with some Technic pins. The orange Technic ball interfaces with the trigger mechanism we built earlier which will allow us to fire the spring-loaded missiles to be added later. 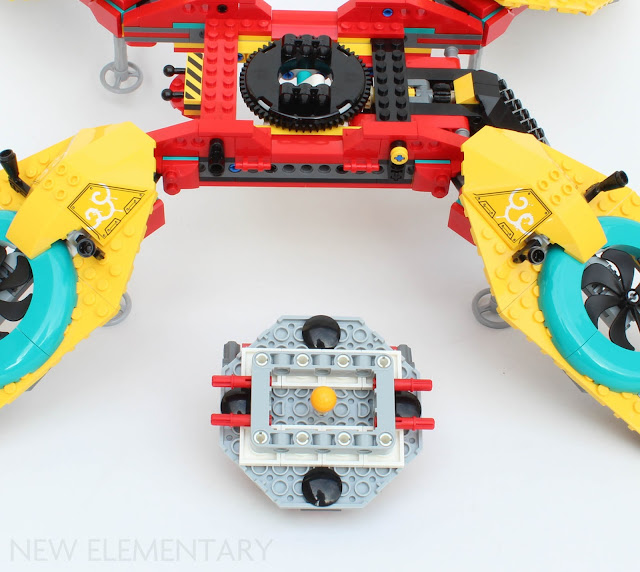 Finally, we add finishing touches to the turret section, including a control interface and seat for Sandy, as well as two large non-firing cannons. The spring loaded launchers are embedded inside the turret structure, and are thus quite discreet, adding play value without compromising the design. 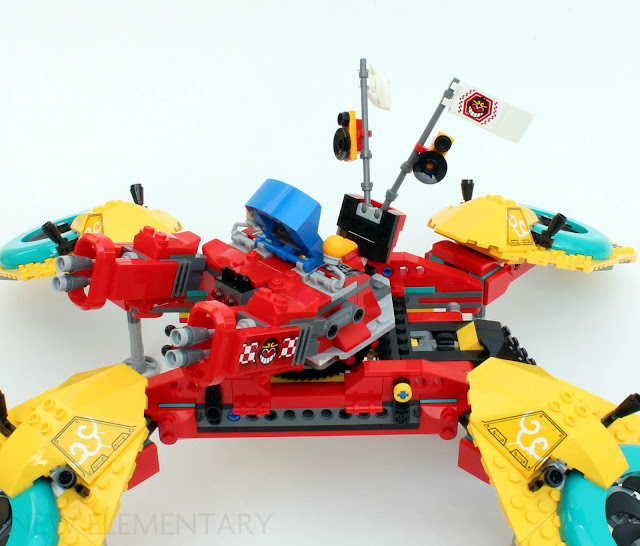 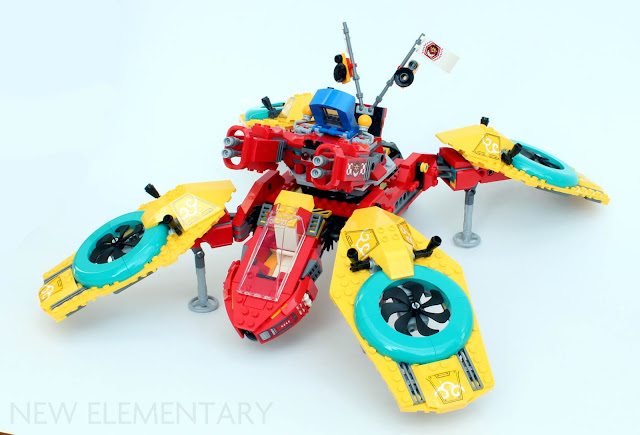 Initially I was partially expecting to have a similar take on 80023 as I did for 80021 Monkie Kid’s Lion Guardian, in so far as the side builds being much more fun than the main attraction. While ultimately I do enjoy the container builds a tad more than the Dronecopter, I ended up liking the large vehicle a great deal more than I expected. In hand, it possesses a great deal of heft and presence that are lost on the stock photos, and possibly my own pictures as well. 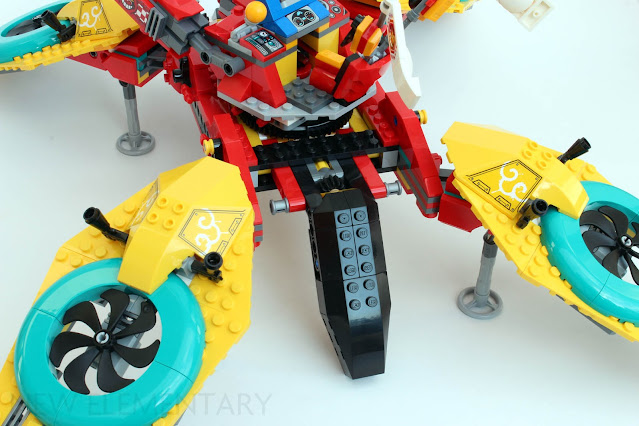 The colours really pop, and the shape of the Dronecopter evokes that of a butterfly - albeit a heavily armed one. The handle hanging out from the rear section initially felt like it would be too weak to support the weight of the vehicle reliably but performed well under duress, and incorporates both a trigger mechanism for the spring loaded launchers as well as a gear mechanism for rotating the turret section, meaning we can hold onto the whole build, and manipulate its functions with just one hand. 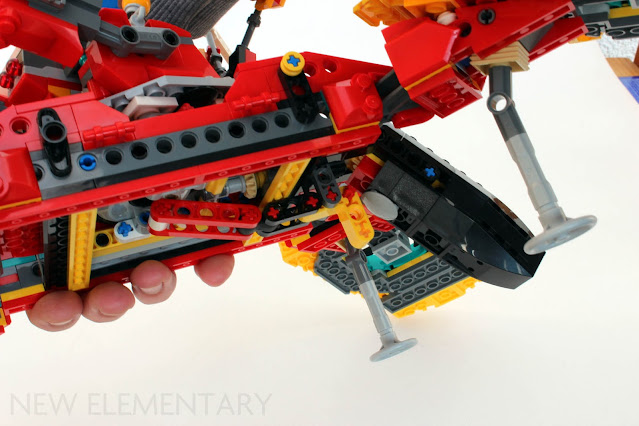 I quite like the way the trigger mechanism works despite the turret rotating while the handle remains fixed in place, and one can fire the launchers regardless of the turret’s position. This is achieved by having the trigger manipulate a vertical loose Technic axle trapped inside the structure, which when pushed up will collide with the ends of the projectiles. Since these are located near the center of the structure, they will always be in the way of the axle regardless of the turret’s rotation. 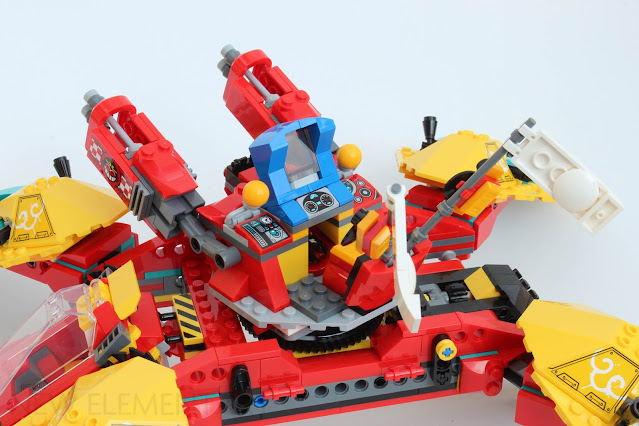 The turret itself is a highlight of the build, as it is fun to see a portion of the set scaled for use by a bigfig when the rest is all scaled to minifigs. The control panel and the seat is sized appropriately for Sandy, and the gun emplacement is completed with a neat little protective screen. 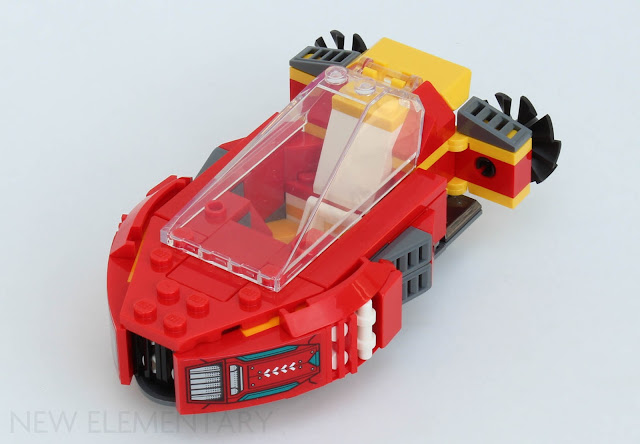 The detaching cockpit section has two little propellers that can flip out when separated from the main vehicle section, allowing it to travel independently. It seems to be more of a submarine or an escape pod than a proper flying machine on its own, though.

The gimmick with the closed containers attaching to either side of the Dronecopter is fun enough, but when loaded the added weight really does start to strain the handle structure. I appreciate the mirrored patterns on the Monkie Kid Team’s containers, but am confused why the spider villains made theirs so obviously… villainous in colour. If this is part of some infiltration scheme, I imagine Monkie Kid will notice that he’s flying around with a container painted with his enemy’s colours. 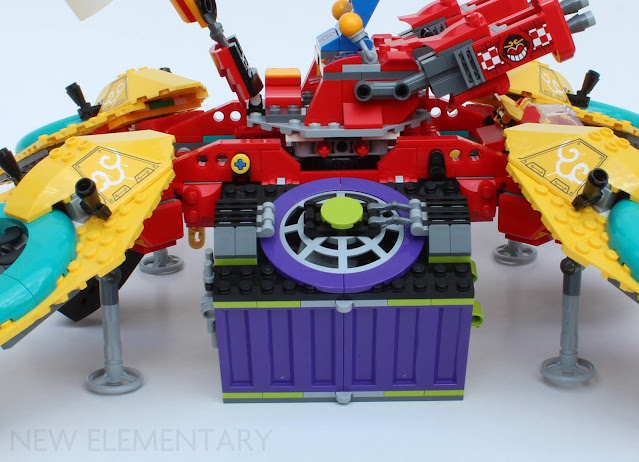 While 80023 Monkie Kid's Team Dronecopter ultimately doesn’t bring any upsets to my current ranking of Monkie Kid sets from the first 2021 wave, it neatly slots into third place behind 80022 and 80020, and I ended up enjoying it a great deal more than I had expected. This is a fantastic source of recolours and rare parts in decent quantities as well as containing a few new-for-2021 moulds. Even though it is a fairly expensive set, I have to rate it high as a parts pack.

There’s a lot here that both older fans and children can enjoy. The build process is fun, if not particularly challenging or complex, and only the Dronecopter itself features any repetition while the side builds are fantastic as always. The opening containers and multitude of minifigures - including much of the main cast - offer a great deal of play potential, and the main vehicle itself offers plenty of features and functions too. Being as large, imposing and vibrant as it is, the Dronecopter makes for a fantastic display piece as well. Whether you’re looking for parts, looking to play or looking to display, 80023 Monkie Kid's Team Dronecopter caters to all of these pursuits.

Posted by: Admin Posted on 3/14/2021 03:00:00 am
Email ThisBlogThis!Share to TwitterShare to FacebookShare to Pinterest
Labels: Monkie Kid, Set review