Lee (cityson on Flickr) creates MOCs for you today using only the parts from LEGO® 75551 Brick-Built Minions and Their Lair, a 2020 set containing many interesting new moulds. Buying this set? Consider using our affiliate links: UK LEGO Shop | USA LEGO Shop | Australia LEGO Shop (for other countries 'Change Region') or try UK Amazon | USA Amazon. New Elementary may get a commission. The products in this article were provided for free by LEGO; the author's opinions are not biased by this.

Last October, Tim Johnson took quite a thorough look at all the interesting parts in the 2 released LEGO® Minions: The Rise of Gru sets. While fans are still waiting for the postponed movie and its tie-in sets to be released, I have taken some time to see what alternate models can be rebuilt from the lovely set 75551 Brick-Built Minions and Their Lair. 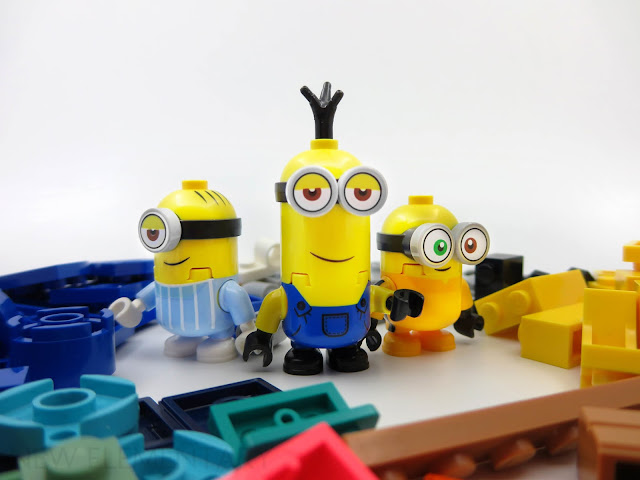 Sadly, I found myself running into a classic creative block. On the bright side, the set has given me 3 Minions minifigures, so I decided to outsource my task to Kevin, Stuart and Bob and see what they can come up with instead. 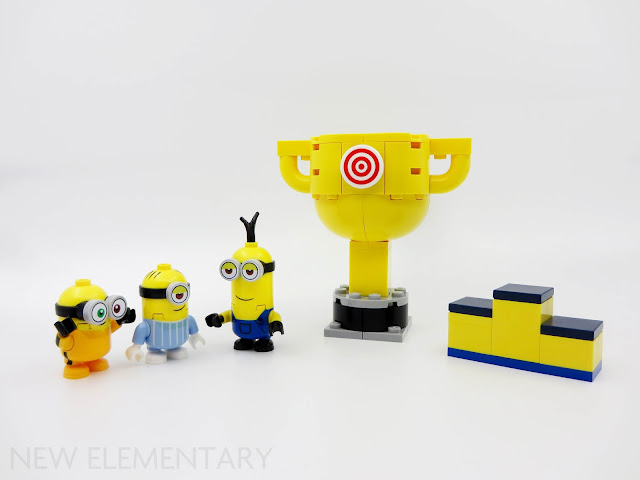 Even Minions deserve a little reward to boost their morale, so before I sat back and relaxed, I decided to build them a big trophy along with a winner podium for prize presentation later. The competitive trio seem to be pretty excited about it already. 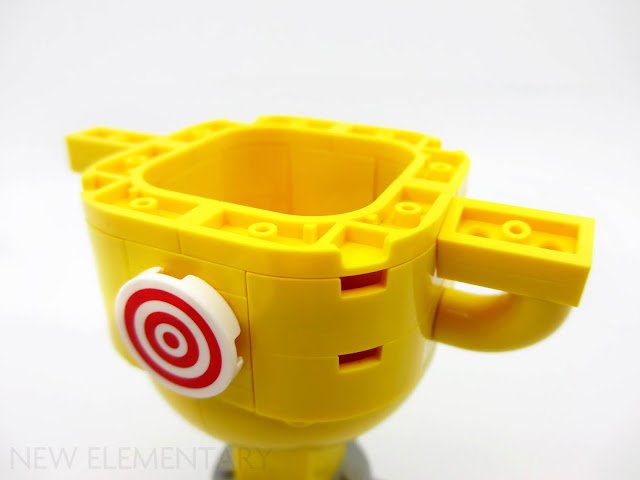 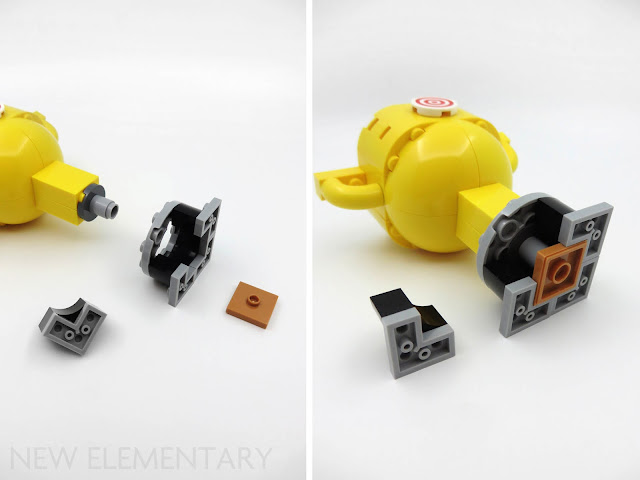 Here is an example of improvisation due to brick limitations in an alternate build. If you look at the inventory of this set, there aren't any 2x4/ 4x4 plates in black or grey for me to build a straightforward base. Instead of a conventional stud-to-tube connection, the base with a circular hole in the middle is locked in place by the square profiles at each end as shown above. It also neatly hides the transition in stud direction inside the base. 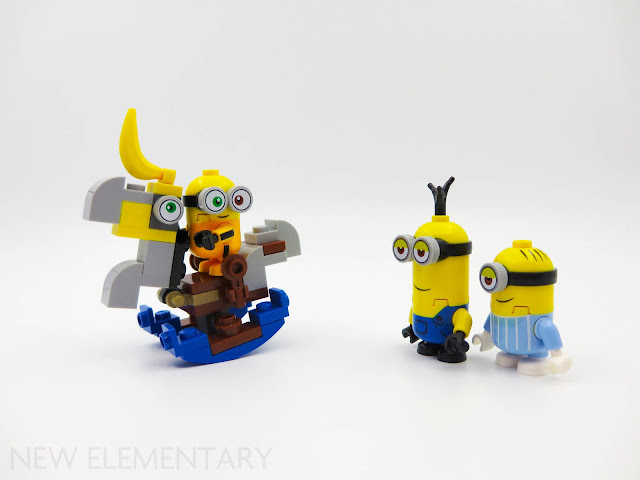 Let’s take a look at what my Minions have come up with now, starting with the adorable Bob. Bob has built a rocking unicorn, presumably for Gru’s unicorn-loving daughter Agnes?

This is a rather simple build, but I will give Bob a pass. He is Bob the Minion, not Bob the Builder after all. The horn of the unicorn was made of that Minions’ favourite, bananas; perhaps it will motivate the rider to rock harder? The base is created with the Slopes Curved 2 x 1 Inverted (6308097 | 24201) and the exclusive Brackets 1 x 1 - 1 x 1 Inverted (6307926 | 36840) in Bright Blue/ Blue, allowing it to rock like a real rocking unicorn. Stuart and Kevin didn’t look too impressed by Bob’s effort though, so let’s see what they have come up with instead. 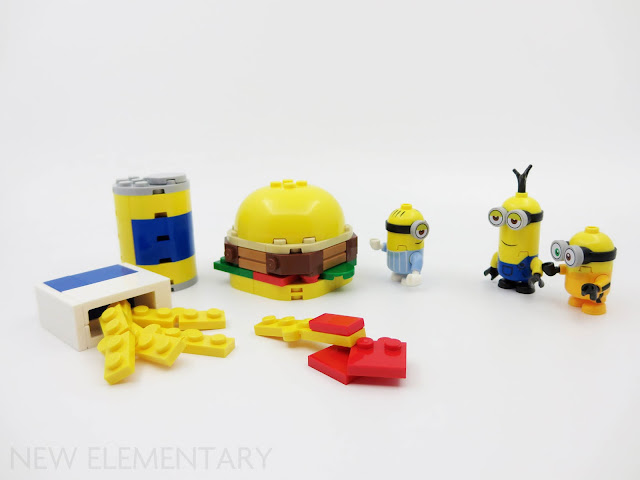 Stuart has created a full set of fast food classics, a burger, fries with ketchup, plus a can of soft drink. 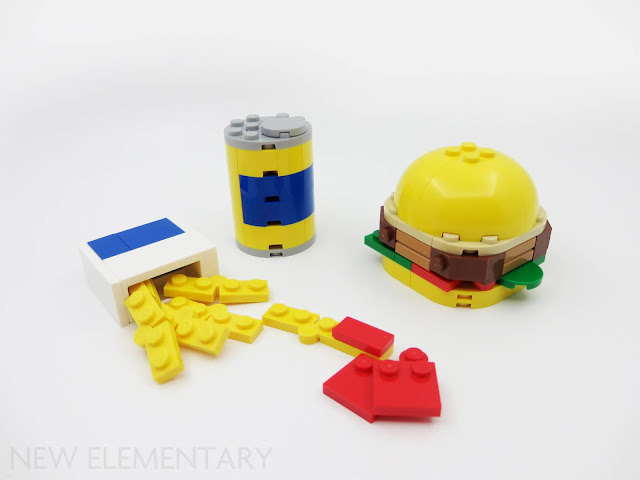 There isn’t anything particularly interesting technique-wise in this set. It started out as an exploration to use the Yellow Brick Round Corner 3 x 3 x 2 Dome Top again for a turtle shell, but the limited colour palette of this set made it quite a challenge. The pile of Yellow Hinge Plate 1X2 (4205196 | 73983) gave rise to the idea of fries, which soon turned the turtle shell into a burger bun. The exclusive Tile Round 2 x 2 with Bottom Stud Holder in Dark Green/ Green (6238881 | 14769) is also used here as the lettuce sticking out of the burger. Kevin wasn’t too impressed either, so let’s take a look at his entry. 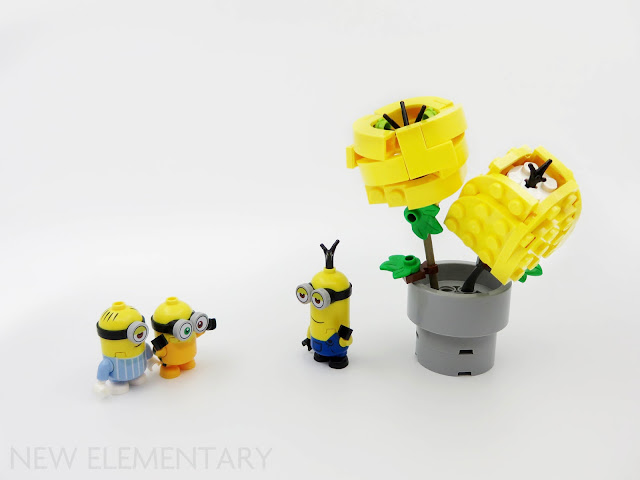 Kevin built some yellow flowers in a pot. They don’t seem to be replicating any specific species of flowers in real life, but I will give Kevin a pass on that as it is an alternate model. Stuart doesn’t seem to agree with that though. 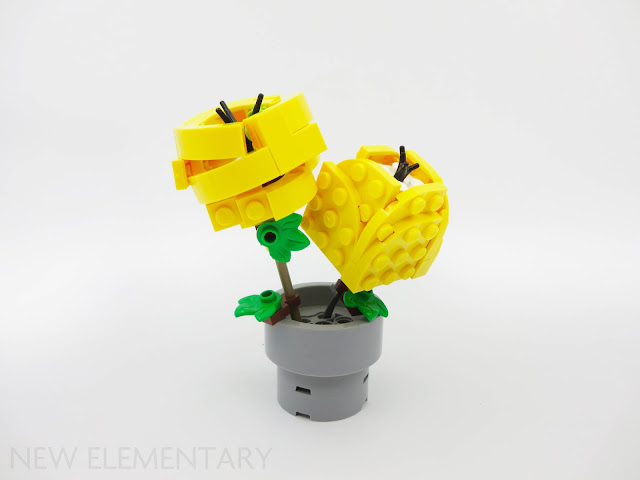 Still under the strong influence of the recently released 10280 Flower Bouquet, flowers was the almost the first thing that came to mind, especially with the few Plates 1 x 1 Round with 3 Leaves in Bright Green (6182261 | 32607) lying around. 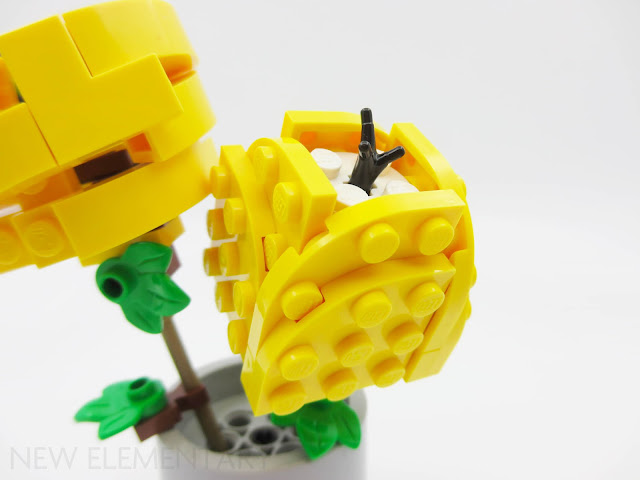 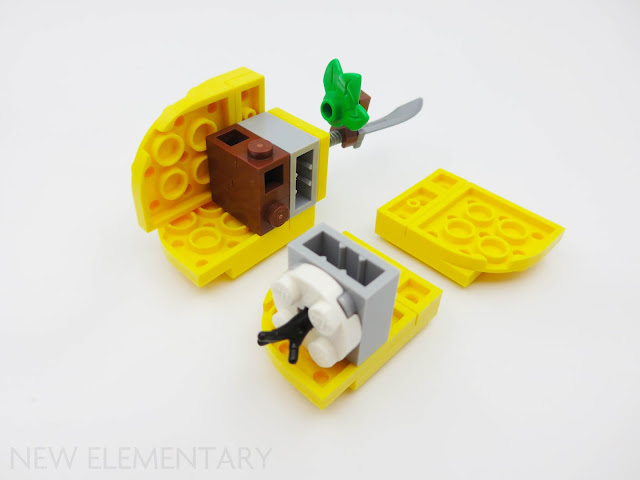 The set didn’t provide too many choices of SNOT bricks to build on 4 sides within the footprint of 2x2, so Kevin used the classic trick of connecting 4 Headlight Bricks 1x1 in a circle to create studs on 4 sides. And thanks to how the 3-module wide pedals interlock with each other, it becomes quite a solid connection. The stem of this flower may not have prickles like roses, but it is sharp as a blade too. 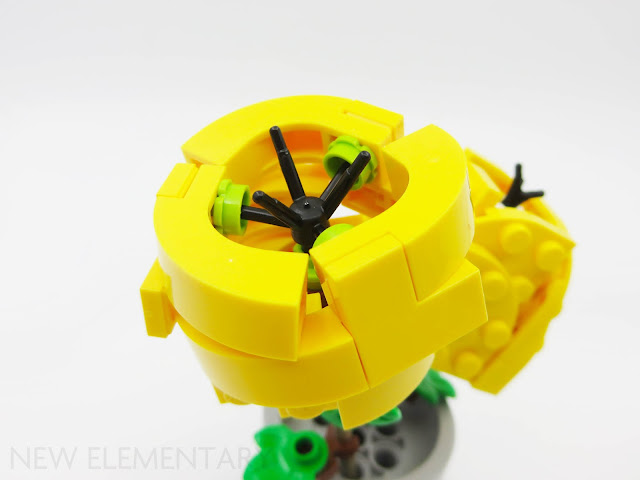 This second flower continues the tradition of using Kevin’s hair as the centrepoint. This time with giant Kevin’s hair, the relatively newly recoloured Plant Flower Stem with Bar and 6 Stems in Black (6299824 | 19119). 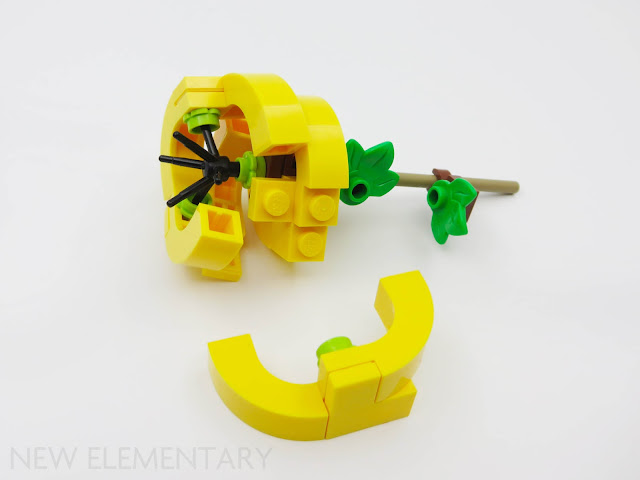 These flower stems are definitely not designed to hold structures together other than a few flowers, so the model is a bit wobbly, but it is sturdy enough as a display. I like the seemingly random and puffy shape formed by the pedals, which are a straightforward assembly of the rare Tiles 2 x 2 Corner in Yellow (6308099 | 14719) and a whole bunch of Brick Arch 1 x 3 x 2 Curved Top in Yellow (4652261 | 6005) in this set. 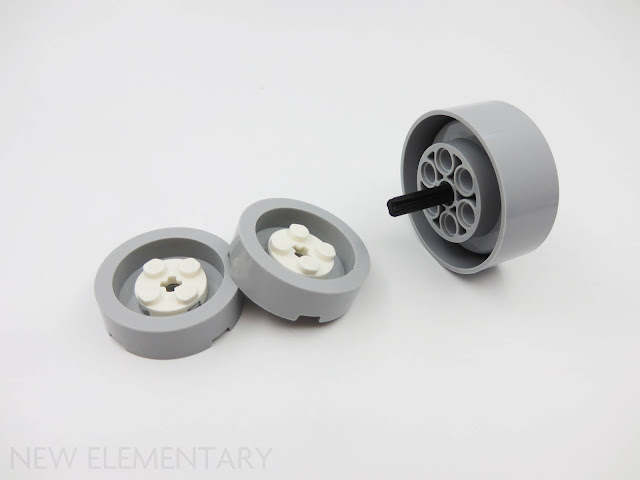 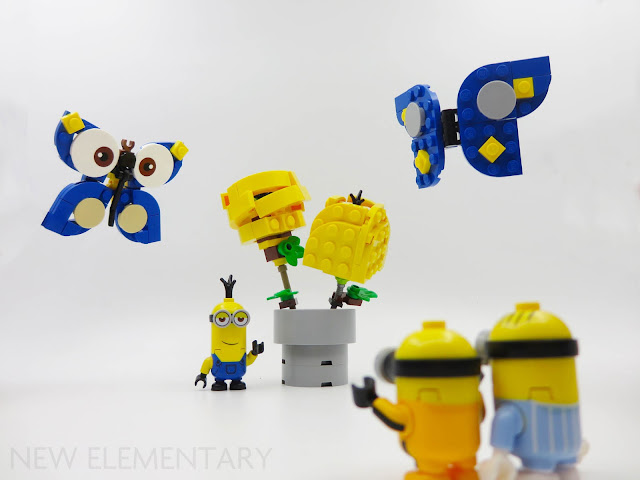 While Kevin claims that the butterflies are part of his entry, I as the judge refuse to believe that, as they were clearly attracted by the flowers and flew in only after his presentation. 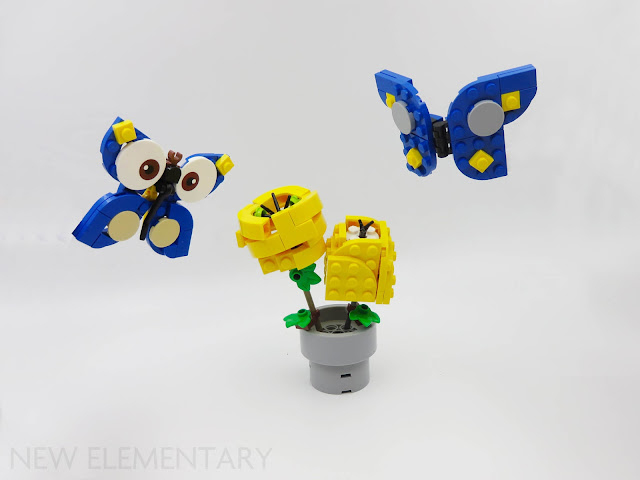 It is always fun to see the same object built in various ways. While the one on the left is clearly more complex, I find the simplicity of the other one quite pleasant too. 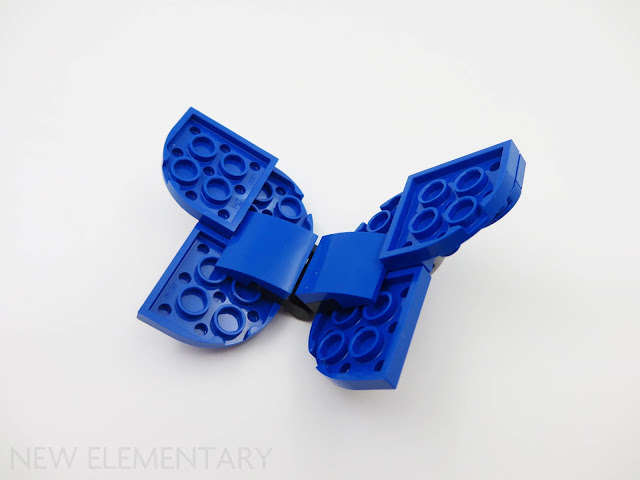 The back of the right butterfly is as simple as it appears to be, with 2 Slopes Curved 2 x 2 Inverted in Blue (6307924 | 32803) to secure the wings. The biggest challenge of building a brick butterfly is always how to keep the wings as thin as possible visually, and inverted curved slopes are perfect for this job. 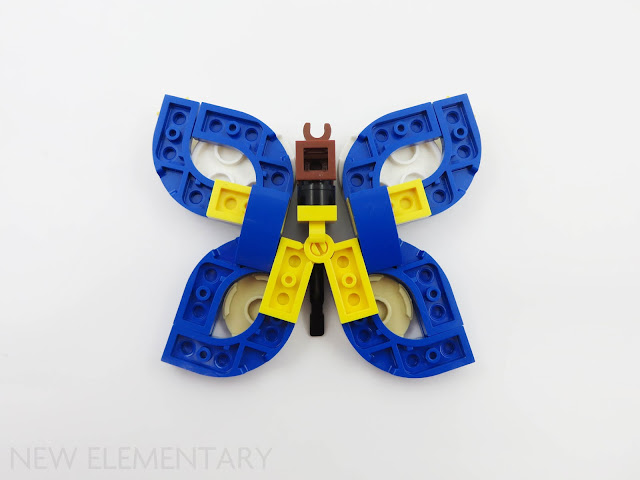 The left butterfly is much more complicated and it took me quite a while to figure this out.The 2 Slopes Curved 2 x 1 Inverted in Blue once again show the usefulness of inverted curved slopes in securing parts. 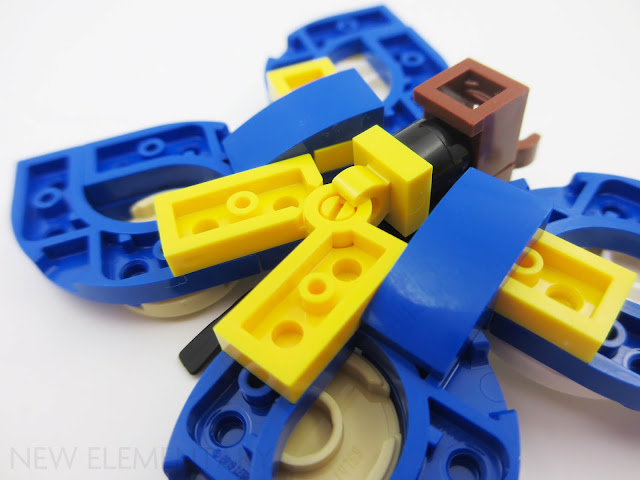 I think the clip connection at the centre is illegal, but the subtle dent on the joint of the Hinge Plate 1X2 (73983) made it feel acceptable to me. 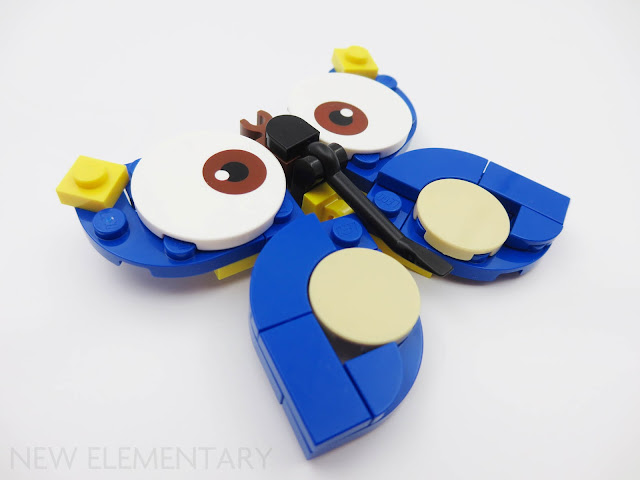 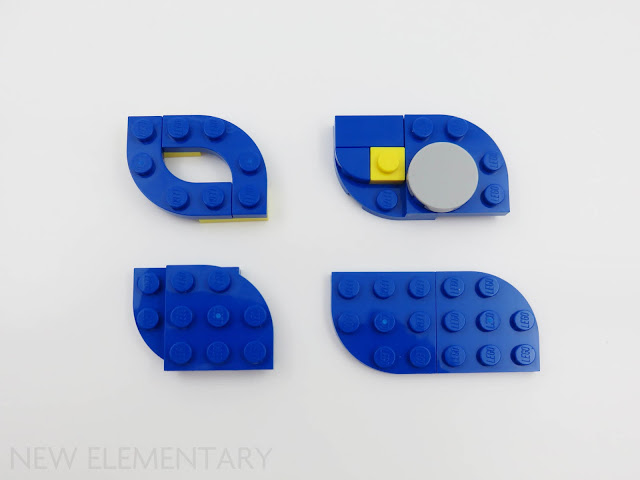 It is also interesting to take a moment and see what the Plate Round Corner 3 x 3 with 2 x 2 Round Cutout (68568) offers other than stability. Compared to a common Plate Round Corner 3 x 3, this relatively new mould allowed me to create the elegant curvy shape of the butterfly’s wings. I am sure other talented builders will find even more geometric possibilities the piece opens up soon. 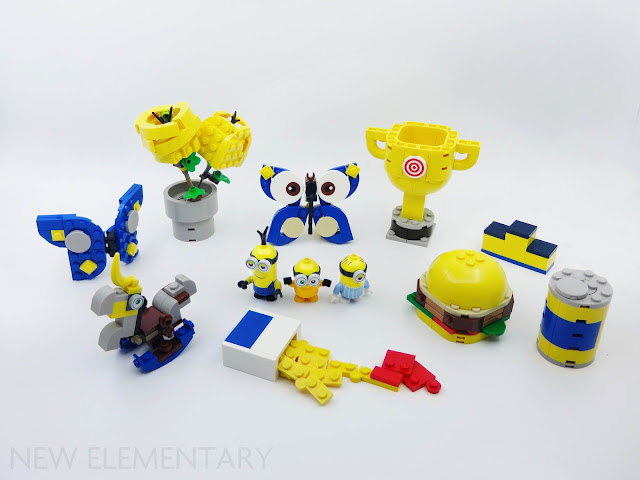 Just like my previous attempt with the Chinese Festival sets, all these alternate models can coexist. The models may not be too intricate, but I always find alternate builds to be such a good exercise for any builders. It challenges you to work under the constraints of colours and parts, and I am always thrilled to have a good challenge. Not to mention, this can give you hours of extra fun from a set without any extra cost. Now, I shall go make the tough call on which Minion made the best build...