The History of the Space Turtle

The best-known LEGO® model by British AFOL Peter Reid is his Exo Suit, but everyone who bought the official LEGO Ideas version, 21109 Exo Suit, knows his Space Turtle just as well. The turtle has been around much longer, having appeared in the bestselling book he co-created with Tim Goddard – LEGO Space: Building the Future, as well as thrilling thousands of children at LEGO fan shows as a part of his extraordinary Turtle Factory display piece.

We are going to reveal a new turtle exclusive for you here at New Elementary but for context, let’s first look back at the history of the space turtle and ask Peter to take us inside his universe where the robot turtles are hard-working, loyal mechanoids, created by the manufacturing giant Anodyne Systems. The M364 turtle has been deployed on numerous Federation outposts where they perform a wide range of duties, and upgraded M450 units are widely used throughout the corporate security sector. 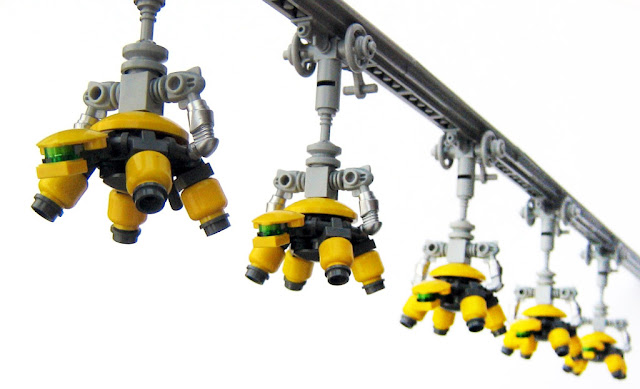 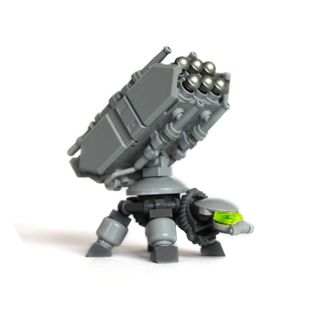 
The M364 turtle has been an enormous commercial success for Anodyne Systems. That versatile little mechanoid holds a special place in the hearts of robot lovers everywhere.

The original schematics were developed by a hand-picked team of Federation engineers on Tranquillity Base twelve years ago. Professor Dade was a member of the committee tasked with making this robot the most efficient general-purpose robot on the market. Dade’s ubiquitous LMD processor is just one of the reasons M364 turtles have proved such an enduring design. 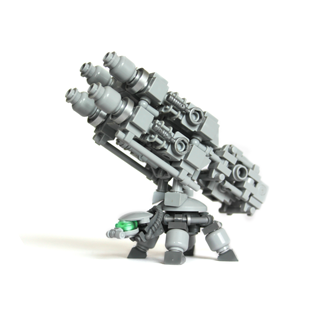 Another reason is the turtle's sheer adaptability. The basic M364 unit has an impressive range of 'out of the box' functions, including domestic, housekeeping, security and companion settings.

Anodyne Systems controls a small, in-house manufacturing division, known as 'Sector Four'. Its sole purpose is creating bespoke turtles, exquisitely tailored to the customer's individual needs. This process has proved difficult to automate, and much of the assembly work is overseen manually. As you can imagine, such craftsmanship does not come cheap. Despite its high prices, Sector Four currently has a six-month backlog.

The next M364 units to roll off the assembly line will feature an eye-catching new shade of ceramic powder coating. It's the latest in a long line of innovations for the M364, and marks yet another commercial success for Anodyne Systems. 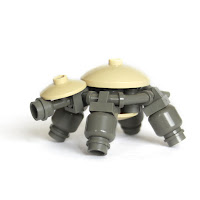 “I came up with the basic design when I was playing around with 3x3 dishes, octagons, tile clips and blank minifigure heads. It was a really nice flow of parts. The very first turtles didn't have particularly nice heads. I reworked them a few weeks later and came up with the standard head design, which I'm still using to this day. I also experimented with a number of different colour schemes, which are dependent on specific parts being available in the right colour.”

“I created a limited run of custom turtle kits, and fellow AFOL William Howard took care of all the tricky stuff like packing and shipping, and I'm eternally grateful for his hard work on the project. Those kits sold out very quickly."

2010 – First version of the Turtle Factory 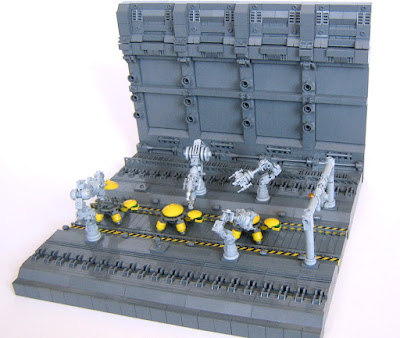 “It started out as a small diorama, and in a few months it had evolved into the Turtle Factory – my largest, most ambitious LEGO model. It's a fully operational, motorised factory, with moving robot arms and production lines.”

“Turtles in various stages of completion appear to be built as they move through the workshop.” 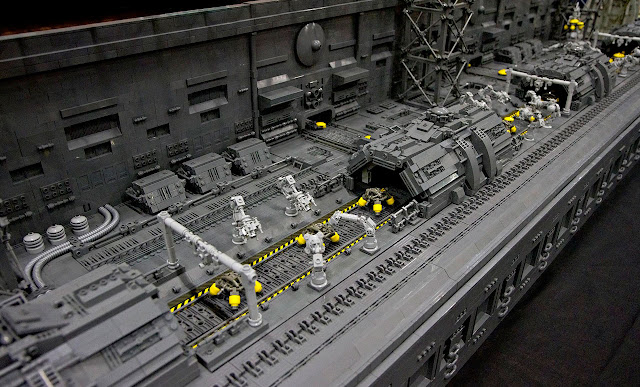 “It doesn't actually build the turtles. The secret is that the whole thing is on loops of hidden Technic track. Carefully positioned tunnels hide the crossover points. The illusion of construction is really quite convincing, once the model is up and running. The factory has fooled a surprising number of people at LEGO events, which never fails to amuse me.” 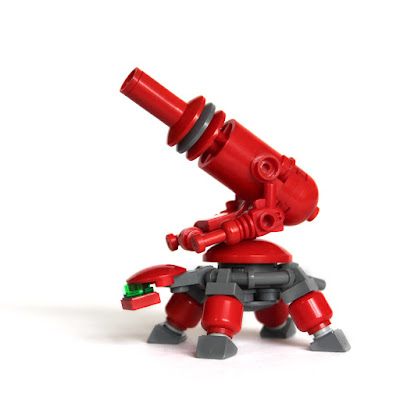 “I was exhibiting at an event and returned from a break to find fellow exhibitor Julie Greig telling an attentive cluster of children the names of all the different weapons. I hadn't actually named the weapons at that point, and I made a mental note to revisit the idea and do it properly. Putting different, lovingly crafted weapons on turtles became something of an obsession in the years that followed. The red variant turtles marked the start of an intensive weapon development program.” 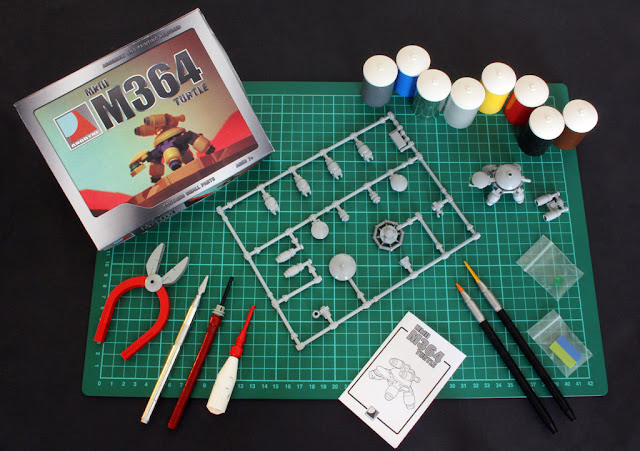 “The next turtle-based project was a mock up of an Airfix-style model kit. I loved those kits as a kid. I painstakingly arranged all the individual parts that make a turtle on a sprue made of LEGO pieces. I added some brick-built paints, tools and brushes and persuaded my long-suffering collaborative partner, Chris Salt, to make the art for a fake box.”

“Turtles made several appearances in the book LEGO Space: Building the Future (which I co-authored with Tim Goddard). They were shown to be part of a much larger universe, performing their duties alongside various different robot and human teams in deep space.”

“3x3 dishes first appeared in lime in 70803 Cloud Cuckoo Palace, which gave me the perfect excuse to revisit the weapon variants idea by creating a new batch of lime turtles. A special article for New Elementary included the Anodyne Systems Product Catalogue, which was an animated short film by the talented Chris Salt, featuring the lime turtles.”

“This version was designed by LEGO designer and AFOL, Mark Stafford. It's very faithful to my original, apart from a slightly altered head which was necessary because of an illegal connection.”

“This variant turtle also makes an appearance in the official LEGO promotional video for the Exo Suit, which was directed and animated by Chris Salt.” 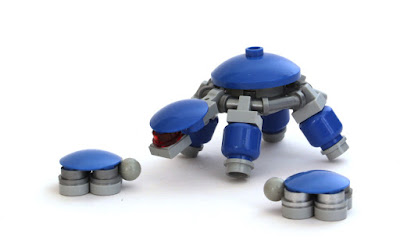 “These are just some cute little baby ones. I know it's silly. Everybody knows robots don't have babies.”

“The actual models only have three legs, and so have to be very carefully positioned for the camera.” 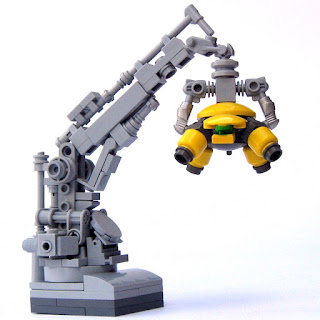 “I decided it would be a good idea to update the Turtle Factory. It'd been a popular model at public shows, but it was then five years old and I figured it was time to make a few changes. The model was unveiled at Bricktastic 2016, the show in aid of Fairy Bricks, and proved very popular with visitors.”

“With a new batch of turtles and redesigned factory arms, the model has a completely new back wall with a pair of small television screens built into it.”

“Chris Salt created a special Factory Tour video to play on the screens on a loop. Hidden speakers emit an ambient rumble of industrial noises. ” 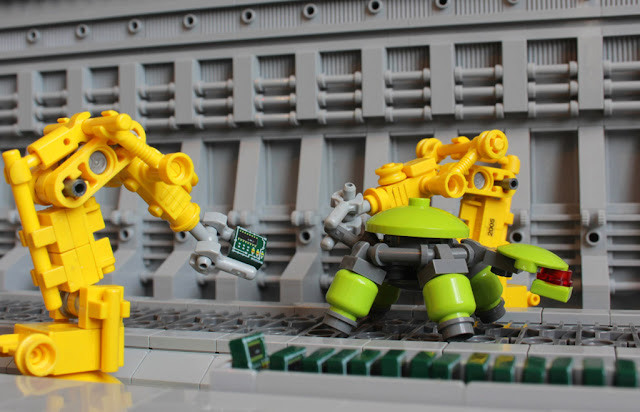 “In 2016 I refined the turtle design and came up with a few interesting improvements using both new and old pieces. Minifigure breathing regulators (from Super Heroes sets) and rings from Clikits (a girls’ range of the 2000s) make a very nice upgraded head.” 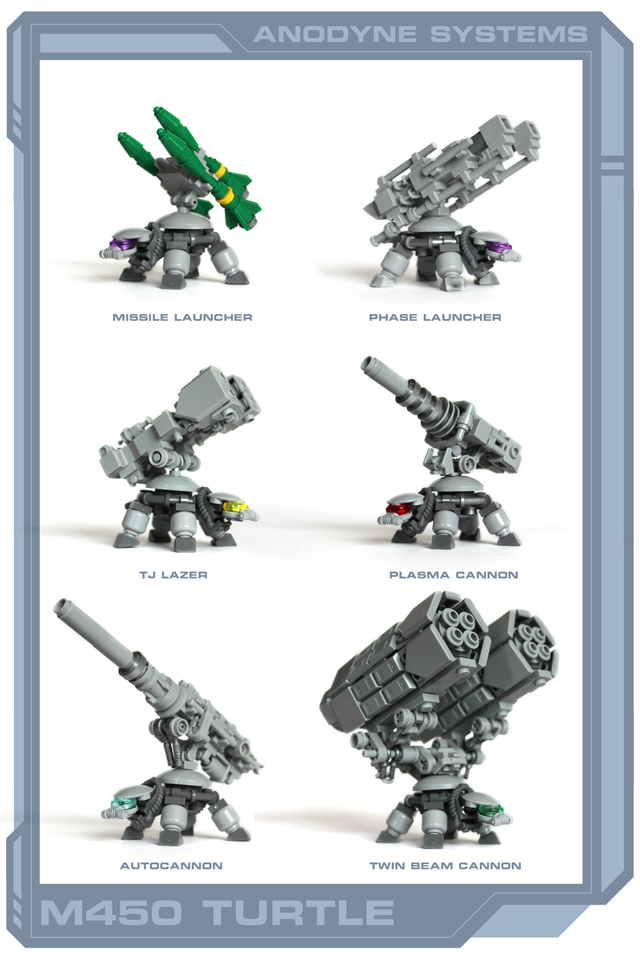 “Adding new 1x1 tile clips and a ridiculous big gun is a look I've grown rather fond of.”

Continue to the next post to see Peter's brand new turtle designs... plus a friend for Keko!

We're launching a GoFundMe campaign so that we can bring you more great content. If you like what we do and want more, take a look!

Text by Tim Johnson and Peter Reid. Our thanks to Chris Salt for the image and video work, and Mandy Johnson for subediting. All images are © Peter Reid except where attributed.
Posted by: Admin Posted on 5/12/2018 05:58:00 pm
Email ThisBlogThis!Share to TwitterShare to FacebookShare to Pinterest
Labels: Community, Space