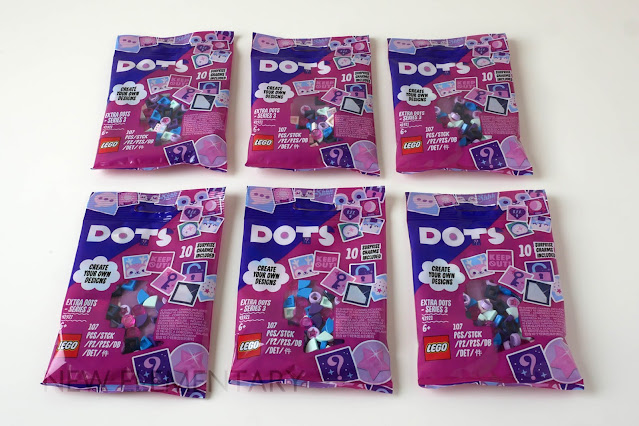 I liked the LEGO® DOTS Series 1 Extras when they were first released, but wasn’t as enamoured with Series 2. However, the Series 3 polybag caught my attention as it contains many elements in colours I enjoy. LEGO sent me five copies of the bag, and I added a sixth of my own for this review and MOC. I immediately cracked a packet open to see exactly what it contained. 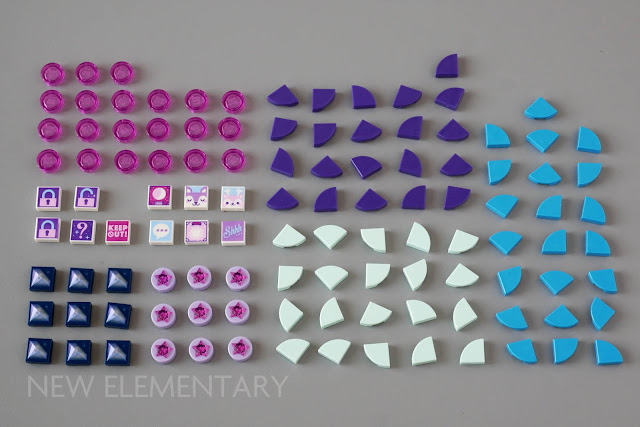 The quarter-round tiles (25269) are found in many sets. Included here are 21 in Dark Purple and Dark Azure, plus 19 in Light Aqua. Similarly, the round tiles in transparent Dark Pink (6053876 | 98138) are common elsewhere, with 20 included in this set. The picture above also shows all of the “extra” Extras - one of each tile, which is a nice bonus. Let’s take a closer look at the uncommon elements.

At first glance these DOTS might not seem very exciting, but I was particularly interested to see there are two new dual-moulded elements in this pack. They can also be found, in fewer numbers (4 of each), in 41934 Starlight Bracelets, another DOTS release from 2021. 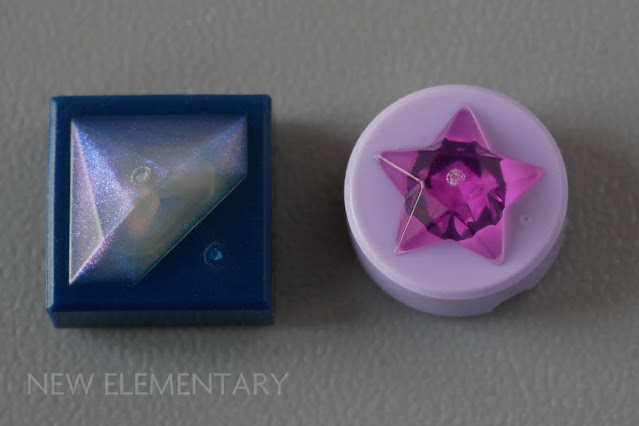 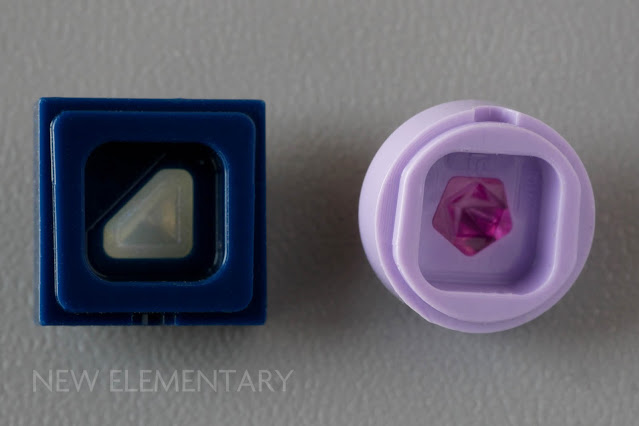 Both of these are really lovely dual-moulded pieces, although it’s a great shame that the injection point for the dark blue diamond tile is in such a prominent position on the top flat surface. It’s much less noticeable on the lavender tile, but still in evidence if you look closely. Although the inventory lists 8 of these, you do of course get 9 of each thanks to TLG’s policy of including one extra of each 1x1 element. 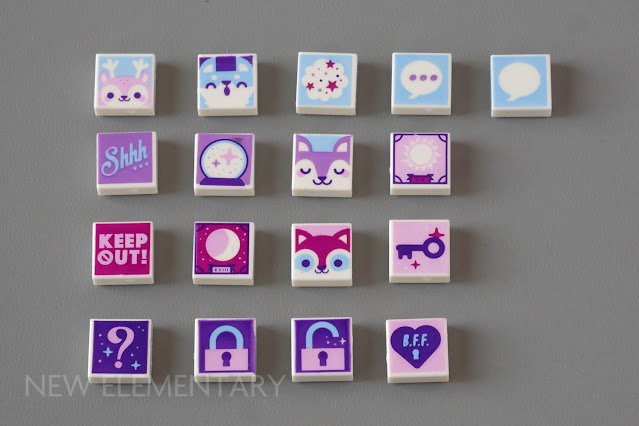 Having opened six bags, I was pleased to see that I had an example of all 16 of the known printed tiles which can be included in the set. You get a random selection of ten from these sixteen in each bag, so it was pretty likely that I would end up with at least one of each. I was also surprised to find an empty speech bubble, which I concluded may well be a mis-print of the tile to its left, with the medium lavender ellipsis print omitted. I found no mention of a blank speech bubble in any of the online inventories, so that is my best guess.

I can see these tiles being used in many a MOC to add a bit of colour and interest. I’m sure they will be a hit with DOTS fans. I have mine set aside for future builds, but for this article I concentrated on utilising the rest of the tiles from the set for my own unique builds. 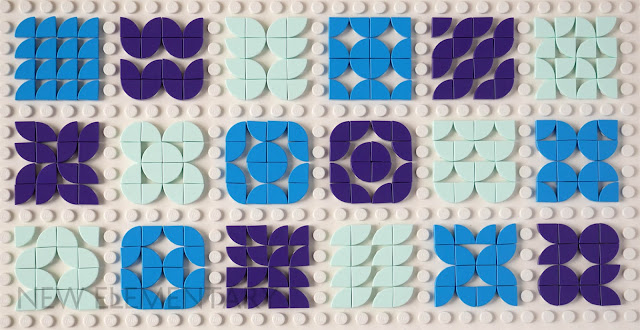 Twice during 2020 I was one of ten lucky AFOLs to be commissioned to decorate the House of DOTS, a touring art installation which initially launched the theme and now aims to promote it globally. One thing we were asked to do in version 1 of the house was make patterns from DOTS in just one colour. We actually used white tiles on a white plate, so the end result was all about the patterns and textures we could come up with. It can be interesting to explore mono colour patterns to cover larger areas. I used the DOTS from my six packets to come up with a few sample designs which might give you some inspiration. Repeating these singly or as a group can be great fun and quite therapeutic. Of course, once you start mixing the colours within these patterns, the number of possible combinations expands enormously. The real reason I wanted so many of these DOTS packets was to build a specific MOC I had in mind since first setting eyes on the dual moulded tiles. I thought the diamonds in particular would make spectacular feature windows for a microscale building. Dark blue is a colour I haven’t used very much in the past, so I started collecting various pieces which would help to construct the model while I waited for the DOTS to arrive. These included fourteen 6x4 plates and over eighty 1x2 grille tiles. 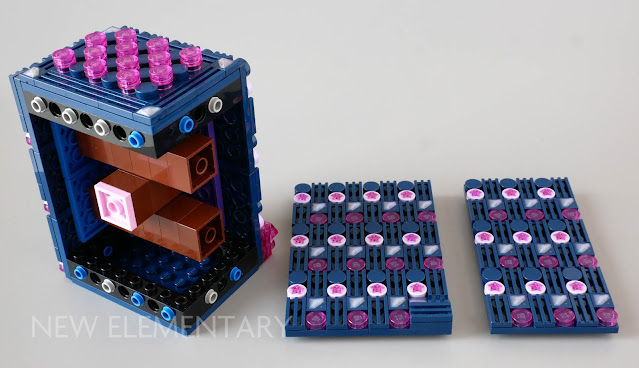 The structure is basically a box clad with curtain walls, held together at top and bottom with two 6x8 Technic frames. The walls are attached with an array of Technic half-pins. The internal beams are only attached to one side wall each, but fit snugly and act as bracing so that the sides do not crush if you pick the box up and accidentally squeeze it too hard in the middle. The result is lightweight but surprisingly strong. As many of you will know, I prefer to work to the Micropolis standard, and so it was inevitable that I would mount this box onto a standard Micropolis ¼ block baseplate. I decided to orient it at a slight angle for more visual interest, and added the obligatory landscaping and my signature coordinating vehicles on the surrounding road. My tiny city is always welcoming new visitors, so the Old Navy Hotel will help to provide capacity for even more guests! It’s a high class establishment which will find a prime spot in Downtown next to the museums, art galleries and amenities. I had originally planned to completely cover the building with the diamond tiles, but then I did the sums to find out just how many I would need. Eek! And so to Plan B, with the dual moulded stars, grilles, round tiles and trans dark pink tiles making an appearance. But with hindsight, I think these add some much-needed contrast to the building which makes it all the better.

At £3.99 / US$3.99 / 3.99€ for 107 pieces plus extras, these bags offer amazing value for money at 3.7p / 3.7c per element. Out of curiosity, I decided to tot up the contents if you wanted to buy them individually from Bricks & Pieces. At the time of writing, the diamond and star dual-moulded pieces were out of stock on the UK B&P site, but were priced at 36p and 35p respectively. Printed tiles were 4p each, the trans dark pink round tiles were 18p and the pizza tiles were 5p. Adding that all up, and accounting for a spare tile of each type, it would cost £13.81 to buy the pieces separately! So if you can pick one of these bags at a discount, which they will surely end up selling for, you will be grabbing an absolute bargain. If you do purchase from LEGO.com, please consider using our affiliate links, New Elementary may get a commission: UK LEGO Shop | USA LEGO Shop | Australia LEGO Shop (for other countries 'Change Region').

The printing quality on the tiles seemed generally good (apart from the single mis-print!) and the dual moulding is a lovely touch, which is only slightly marred by the unsightly positioning of the mould injection point on the dark blue tiles. Those opalescent diamonds are really eye catching and certainly this girl’s best friend!

Posted by: Admin Posted on 7/07/2021 10:35:00 am
Email ThisBlogThis!Share to TwitterShare to FacebookShare to Pinterest
Labels: Dots, MOC, Set review